To read the full Japanese Yen forecast, including the technical outlook, download our new 3Q trading guide from the DailyFX Free Trading Guides!

As expected from the second-quarter fundamental outlook, the Japanese Yen spent most of its time weakening against its major counterparts before the third quarter. Albeit, its pace of deprecation notably slowed compared to what occurred in the first quarter. The anti-risk currency is likely not receiving much attention due to a persistent decline in stock market volatility.

While there have been some moments of brief volatility when looking at global sentiment, a lasting trend was notably absent. A revival in volatility remains a prominent upside potential for the Yen, but ongoing loose monetary policy around the world could keep market sentiment from materially souring. Rather, the Yen will likely remain glued to developments in government bond yields.

The Tough Road Ahead for the Yen

In the chart above, my majors-based Yen index can be seen somewhat closely following spreads between Japanese and United States 10-year government bond yields. During the second quarter, Japanese bond rates made a slight comeback against their US counterparts. This is as the Federal Reserve repeatedly reiterated its dovish stance, cooling concerns about sooner-than-expected tapering.

But, June’s Fed rate decision showed that more members are starting to see a rate hike as appearing nearer on the horizon. This also likely brings forward policy tapering expectations. Given the elevated inflationary pressures in the world’s largest economy, this is understanding. But, the central bank largely views near-term CPI gains as transitory. But, might elevated price pressures persist?

Will Relatively High US Inflation Persist?

According to a survey conducted on the behalf of Discover Financial Services, 70% of US consumers have a ‘pent-up’ desire to start travelling again. But, 87% of them reported that the cost of destination could determine where they go. About 66% of travelers are planning a trip about 1 – 6 days long. Given the lockdown environment experienced last year, these figures are understandable.

What this may also mean is that consumers’ willingness to pay for goods related to travel, dining and going out could perhaps be more inelastic than normal. This means that an increase in price for these goods may not necessarily result in that much of a decline in their consumption. So, if demand remains elevated given rising vaccination rates, then inflation may persist in these segments of the economy.

This may open the door to elevated price pressures that lift inflation above the Fed’s target. If that results in sooner-than-anticipated tightening in the US compared to Japan, USD/JPY could continue its broader 2021 trajectory higher. Meanwhile, the Bank of Japan still has relatively low inflation to worry about. This will likely leave dovish policy in place for longer than in the US.

(In the chart below, the difference between a hypothetical inelastic demand curve and a normal, unitary one has been visualized. It serves solely as a demonstration and is meant to represent how inelastic demand responds less aggressively to shifts in the price of a good.)

To read the full Japanese Yen forecast, including the technical outlook, download our new 3Q trading guide from the DailyFX Free Trading Guides! 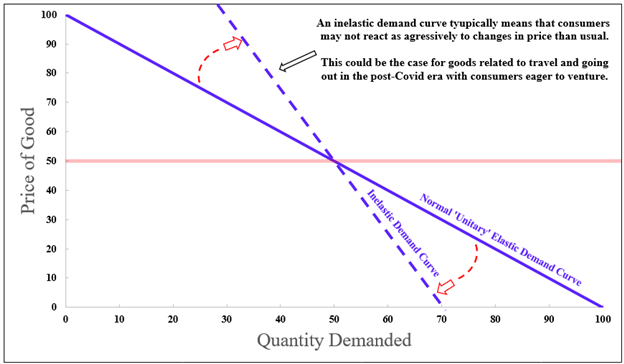