Gold edged lower on Wednesday and snapped three successive days of the winning streak, eroding a part of the previous day’s strong gains to a four-day high. The XAU/USD remained on the defensive through the early part of the European session and was last seen hovering near the daily low, around the $1,815 region. The upbeat market mood – as depicted by a generally positive tone around the equity markets – was seen as a key factor that acted as a tailwind for the safe-haven precious metal. Apart from this, the emergence of some US dollar buying exerted some pressure on the dollar-denominated commodity.

As investors looked past Fed Chair Jerome Powell’s less hawkish comments on Tuesday, the prospects for an eventual Fed lift-off in March extended some support to the greenback. Apart from this, an uptick in the US Treasury bond yields further underpinned the buck and weighed on the non-yielding gold. It is worth recalling that Powell, during his renomination hearing before the Senate, said that it could take several months to decide on running down the central bank’s balance sheet. This eased fears about a sudden withdrawal of monetary support, which dragged the USD to its weakest level since November.

The downside, however, remains cushioned as investors seemed reluctant to place aggressive bets ahead of Wednesday’s release of the latest US consumer inflation figures. Gold, which is considered a hedge against higher inflation, could benefit from hotter-than-expected US CPI print. Conversely, a softer reading would be enough to keep the USD bulls on the defensive and provide a goodish lift to the commodity. The fundamental backdrop supports prospects for a further near-term appreciating move for the XAU/USD, though bulls preferred to wait on the sidelines ahead of the key data risk.

From a technical perspective, the overnight convincing break through the $1,810-12 horizontal zone adds credence to the positive outlook. Hence, any further pullback is more likely to attract fresh buying and remain limited near the $1,800 mark. Failure to defend the mentioned handle might prompt some technical selling and accelerate the fall towards the $1,790 region. This is closely followed by support marked by an upward sloping trend-line extending from August 2021 swing low, which if broken decisively would be seen as a fresh trigger for bearish traders.

On the upside, bulls are likely to aim back to test a static resistance near the $1,830-32 region. A sustained strength beyond would set the stage for a further near-term appreciating move and push gold prices towards the next relevant hurdle near the $1,848-50 region. The momentum could further get extended towards the $1,869-70 area en-route the $1,877 zone, or a multi-month high touched in mid-November. 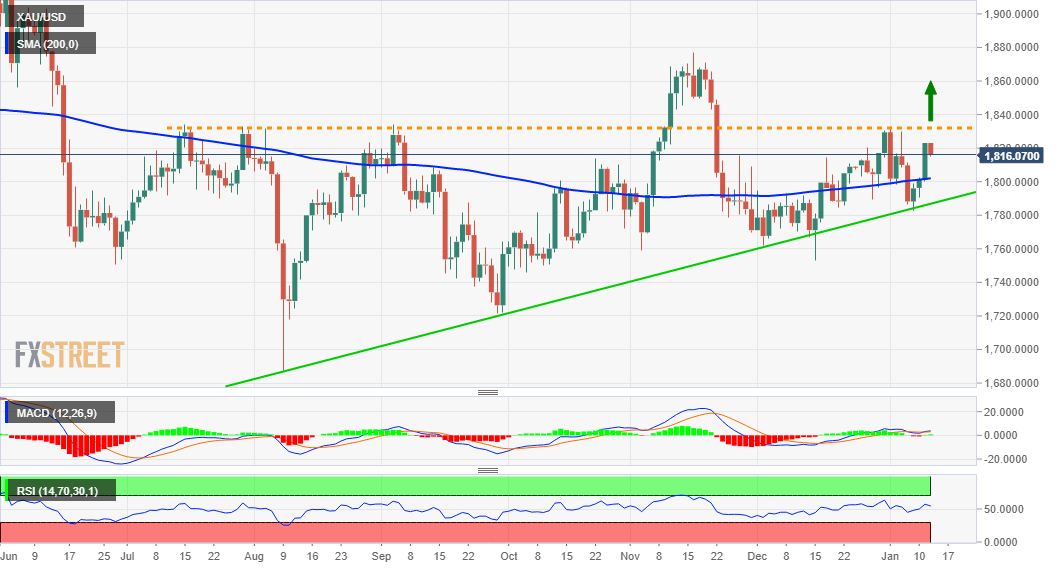