Netflix, Inc (NASDAQ:NFLX) is set to print its fourth-quarter earnings after the closing bell Thursday as big tech earnings kick off the start of the 2022 trading year.

When the streaming giant reported third-quarter results on Oct. 19, it posted revenue of $7.48 billion and earnings of $3.19 per share, which beat the Street consensus of $2.56 for the quarter. Netflix fell over 2% the following trading day but soared up about 10% over the seven trading days that followed.

During the third quarter, Netflix added 4.4 million net subscribers. The company guided for expectations of adding 8.5 million subscribers during the fourth quarter.

Deutsche Bank analyst Bryan Kraft lowered his estimate on new subscriptions to 7.25 million due to his analysis of Google trends data.

Holding a position of shares in a company over an earnings print is risky because stocks can fall on an earnings beat and rise following a miss. For options traders playing short-dated contracts, it is even riskier because the institutions selling the contracts increase the premiums to account for the potential volatility.

The market is pricing in about a 7.5% move and if Netflix doesn’t move more than that on Friday, many option traders will find their contracts expire worthless.

Netflix stock has been in freefall since reaching a Nov. 17 all-time high of $700.99 and has settled into a bearish pattern on the daily chart. Whether the pattern is recognized or negated will likely come down to how the market reacts Friday to its earnings print.

See Also: If You Invested $1,000 In Netflix Stock One Year Ago, Here’s How Much You’d Have Now

The Netflix Chart: Netflix has fallen over 25% off its all-time high. On Thursday, the stock was continuing a two-day bounce to bring its relative strength index (RSI) up from oversold territory. Since Jan. 5, Netflix’s RSI measured in below the 30% level, which can be a buy signal for technical traders.

The most recent multiday fall between Jan. 12 and Tuesday, paired with a relief bounce to the upside, may have settled Netflix into a bear flag pattern on the daily chart. The measured move of the pattern is about 6.5%, which indicates that if the pattern is recognized Netflix could fall toward the $492 level.

There is a key support level on Netflix’s chart at $505 and if the stock closes a trading day below the area, a steep sell-off could occur. The area is key because Netflix has been trading above it since June 22 and has tested the level as support multiple times and bounced. 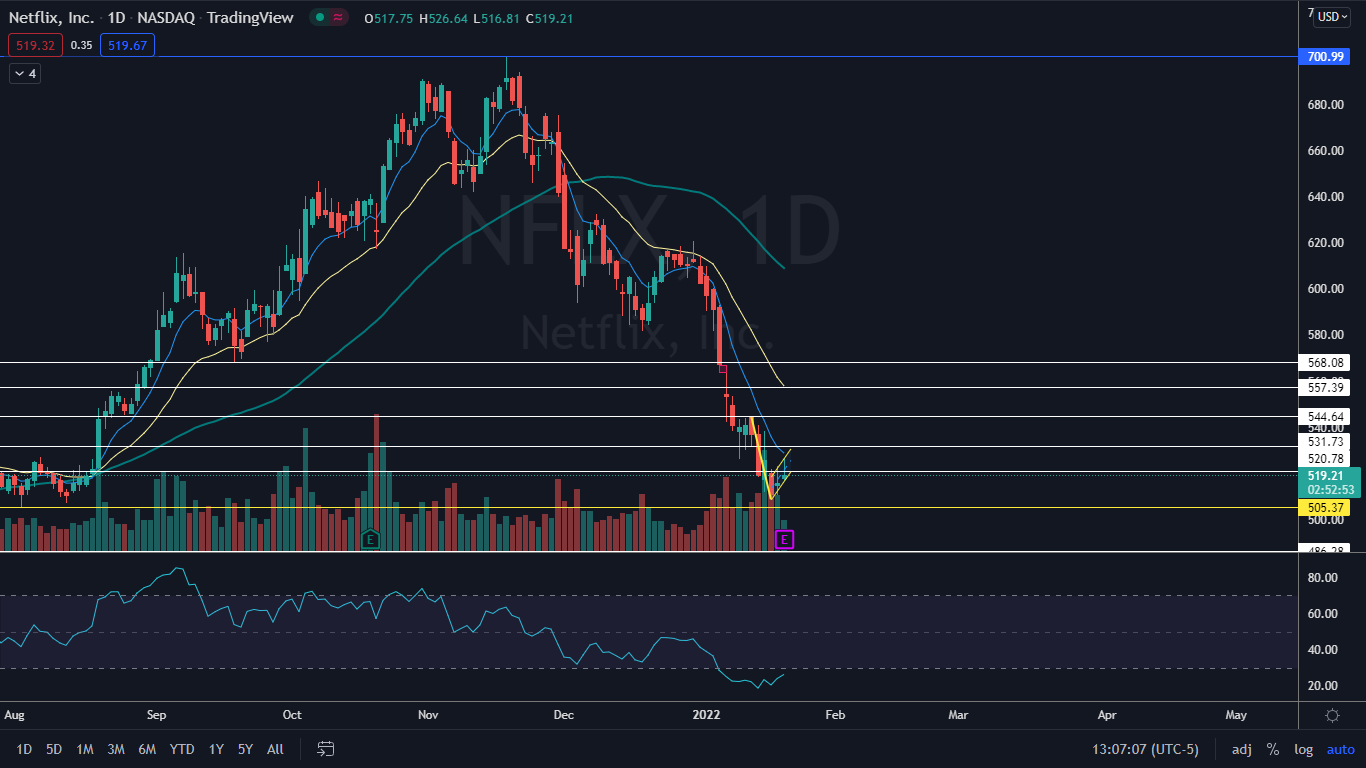