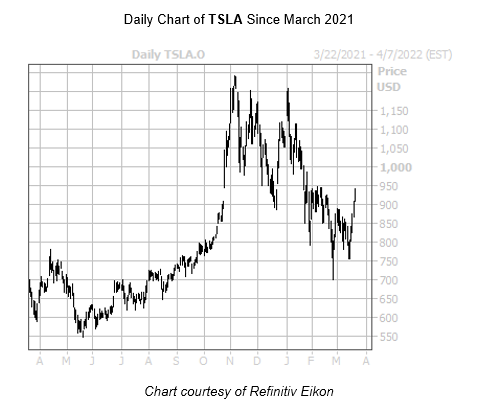 Given this recent price action, it makes sense the electric vehicle (EV) powerhouse has landed on Schaeffer’s Senior Quantitative Analyst Rocky White’s list of stocks that have attracted the highest options volume during the past 10 days. According to the list below, over the last two weeks 6,457,493 calls and 6,057,380 puts have been exchanged. The most popular contract over this time period was the March 900 call. 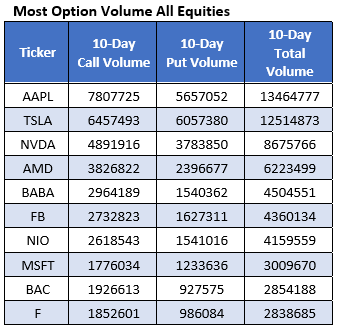 International Securities Exchange (ISE), Chicago Board Options Exchange (CBOE), and NASDAQ OMX PHLX (PHLX) data shows puts have been increasingly in popularity over the past 10 weeks. This is per Tesla stock’s 50-day put/call volume ratio that ranks 99% higher than readings from the last 12 months, indicating a much healthier-than-usual appetite for bearish bets of late.

Circling back to analyst sentiment, brokerage firms are split on TSLA. Of the 19 analysts covering the stock, 10 call it a “hold” or worse, while nine say “buy” or better. Meanwhile, the 12-month consensus price target of $952.63 is a slim 2.7% premium to current levels.