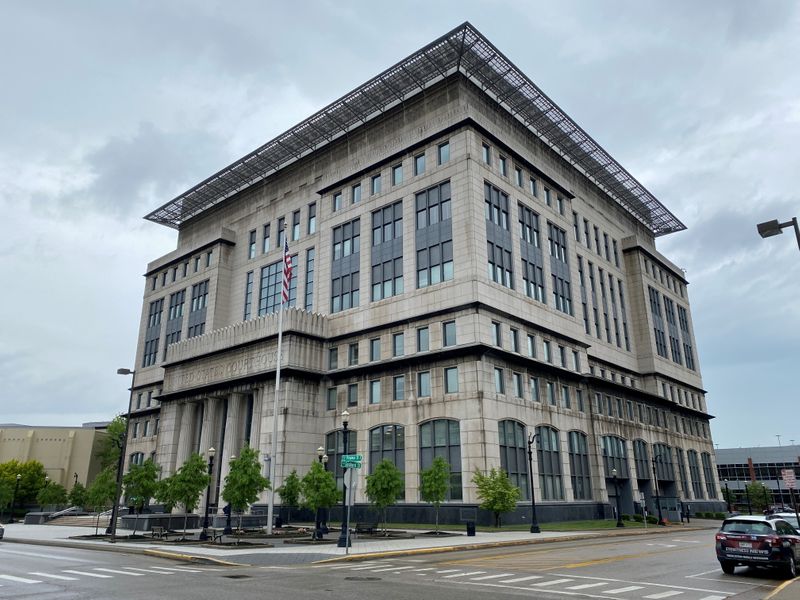 © Reuters. FILE PHOTO: A general view of the courthouse where the three largest U.S. drug distributors are facing their first trial over claims that they fueled the opioid crisis, in Charleston, West Virginia, U.S., May 3, 2021. REUTERS/Brendan Pierson/File Photo

CHARLESTON (Reuters) – After a nearly three-month trial, lawyers for a West Virginia city and its county are set to deliver closing arguments on Tuesday in their case against the nation’s largest drug distributors, seeking $2.5 billion to remedy an opioid crisis they say the companies helped cause.

Huntington and Cabell County, along with the rest of the state’s local governments, have not signed on to the $21 billion nationwide settlement with distributors McKesson Corp (NYSE:), AmerisourceBergen (NYSE:) Corp and Cardinal Health Inc (NYSE:) announced last week, instead betting that they can do better on their own.

There is no jury in the trial. The lawyers will be making their pitch directly to U.S. District Judge David Faber in Charleston, who will decide whether the companies must pay to help remedy the region’s opioid crisis. The distributors’ lawyers are expected to make their closing arguments on Wednesday.

Nearly 500,000 people died from opioid overdoses in the United States from 1999 to 2019, according to the U.S. Centers for Disease Control and Prevention. The CDC earlier this month said provisional data showed 69,710 opioid overdose deaths in 2020, up more than 36% from the previous year.

More than 3,000 lawsuits have been filed by local governments around the country accusing drugmakers of downplaying the risk of opioid pain medications, and distributors and pharmacies of ignoring red flags that they were being sold illegally.

The defendants have denied the claims, saying they complied with state and federal laws and blame doctors’ prescribing practices for a surge in opioid use.

Huntington and Cabell’s case was the first against the distributors to go to trial.

Faber has heard testimony from Huntington Fire Chief Jan Rader, who described the impact of opioid addiction on the region as “carnage,” with thousands of overdose deaths and a flood of emergency calls overwhelming the city, the Mountain State Spotlight reported.

He also saw internal AmerisourceBergen emails mocking prescription opioid addiction in the state, including parody lyrics for the theme song to the television sitcom “The Beverly Hillbillies.”

The title of the show, about a formerly poor family that moves to a wealthy California enclave, used a disparaging term for rural Americans.

Former AmerisourceBergen Vice President Chris Zimmerman, the author of some of those emails, apologized in court but said the messages did not reflect the company’s culture, according to newspaper reports.

Other trials are also underway against drugmakers in New York and California, and pharmacies are scheduled to face trials in the coming year.

Last week’s settlement, which also includes $5 billion from drugmaker Johnson & Johnson (NYSE:), could point the way to a broader deal including more defendants. But getting the full $26 billion depends on widespread participation by states and local governments, and some have expressed skepticism.

West Virginia Attorney General Patrick Morrisey last week said the state was a “resounding no” on the deal, calling it unfair to smaller but harder-hit states.