Beavis and Butt-Head are coming back, and animator Mike Judge gave a preview on Twitter on what to expect.

What Happened: Judge tweeted a bare-bones announcement of his characters’ return on Paramount+, the streaming service owned by ViacomCBS (NASDAQ: VIAC).

“Beavis and Butt-Head will be returning this year with a brand new movie and more on Paramount+,” Judge tweeted. “No exact date yet, but soon. They need some time to get back in shape.”

Judge added penciled character designs of how his characters might have aged over the years, with Butt-Head having put on some excess weight and Beavis wearing eyeglasses. 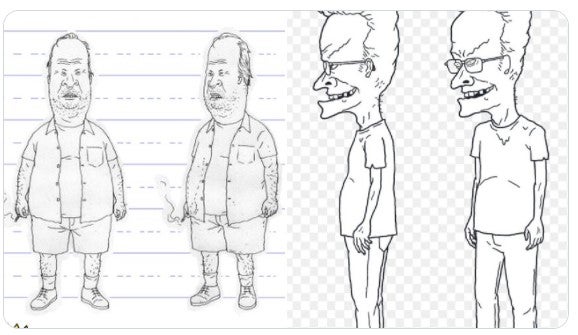 See Also: ‘South Park’ Creators Snag $900M For 6 More Seasons, 14 Feature Films
Why It Matters: Judge’s antisocial teenage slackers first appeared in the MTV animated short “Frog Baseball,” with the animator voicing the characters. The short was well received and Judge was given the green light to create a weekly series that ran on MTV from March 1993 through November 1998, with a brief revival from October to December 2011.

The duo animated duo also headlined the 1996 feature film “Beavis and Butt-Head Do America,” which was commercially successful. However, talk about a film sequel and a possible live-action version of the franchise came to naught.

Comedy Central, a Viacom subsidiary commissioned a revival series in July 2020, but it’s unclear if the Paramount+ series hinted at by Judge is this series transferred to another platform.