USD/CAD extends the rebound from the monthly low (1.2450) following the string of failed attempts to close below the 200-Day SMA (1.2498), and the Bank of Canada (BoC) interest rate decision may do little to derail the recent advance in the exchange rate if the central bank continues to endorse a wait-and-see approach for monetary policy.

USD/CAD carves a series of higher highs and lows ahead of the BoC and Federal Reserve rate decisions on tap for later this week, and more of the same from Governor Tiff Macklem and Co. may keep the bullish price action intact as “the economy continues to require considerable monetary policy support.”

Looking ahead, the US Dollar may continue to outperform its Canadian counterpart as long as the BoC remains “committed to holding the policy interest rate at the effective lower bound,” but fresh projections coming out of the central bank may curb the recent advance in USD/CAD if Governor Macklem and Co. reveal a shift in the forward guidance for monetary policy.

As a result, USD/CAD may face increased volatility going into the Federal Open Market Committee (FOMC) as Chairman Jerome Powell and Co. plan to implement higher interest rates later this year, and speculation for an imminent change in regime may keep the exchange rate afloat as the CME FedWatch Tool reflects a greater than 90% probability for a 25bp rate hike in March.

In turn, USD/CAD may continue to retrace the decline from the monthly high (1.2814) as market participants brace for higher US interest rates, and a further appreciation in the exchange rate may continue to alleviate the tilt in retail sentiment like the behavior seen during the previous year. 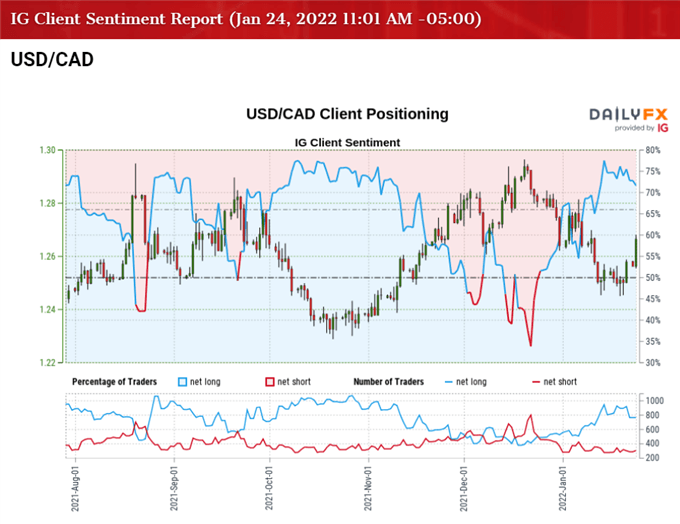 The IG Client Sentiment report shows 67.05% of traders are currently net-long USD/CAD, with the ratio of traders long to short standing at 2.04 to 1.

The number of traders net-long is 1.18% lower than yesterday and 15.90% lower from last week, while the number of traders net-short is 29.47% higher than yesterday and 4.24% higher from last week. The decline in net-long position comes as USD/CAD extends the advance from the monthly low (1.2450), while the rise in net-short interest has helped to alleviate the crowding behavior as 75.89% of traders were net-long the pair earlier this month.

With that said, recent price action raises the scope for a larger rebound in USD/CAD as it carves a series of higher highs and lows, and the decline from the December high (1.2964) may turn out to be a correction in the broader trend if the BoC endorses a wait-and-see approach for monetary policy.