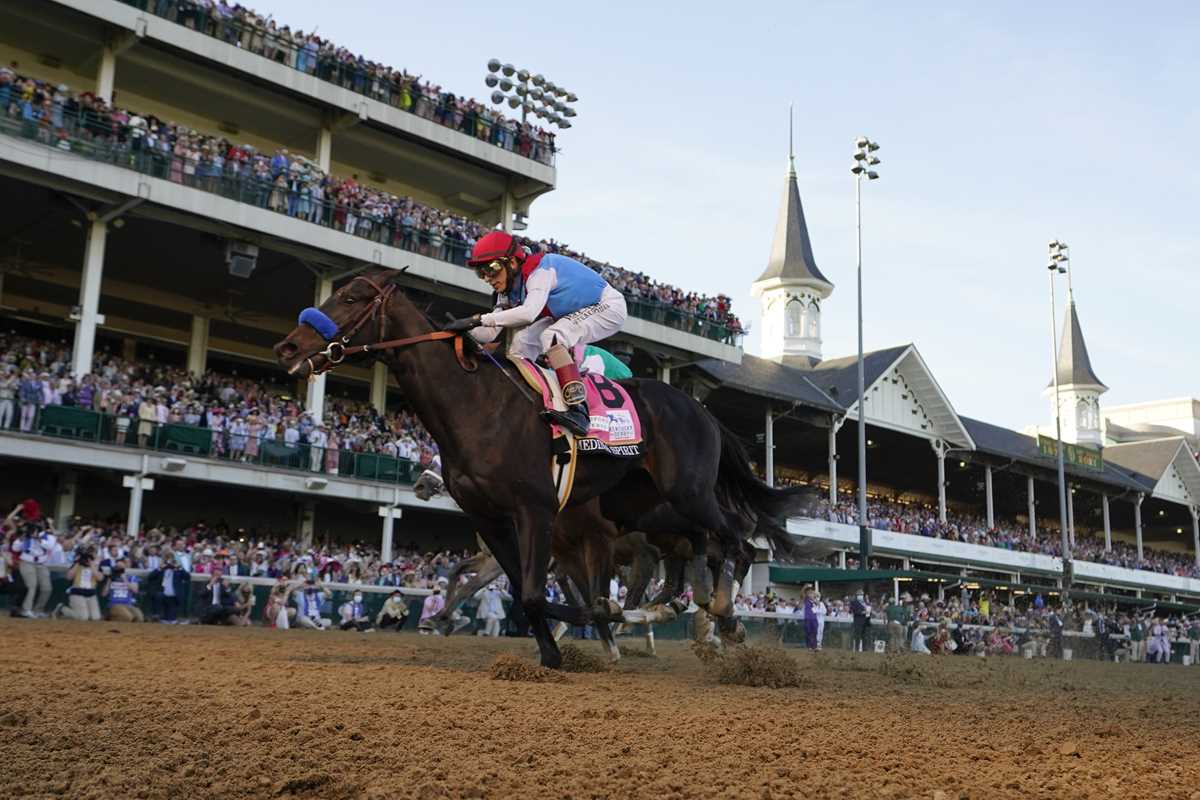 John Velazquez riding Medina Spirit crosses the finish line to win the 147th running of the Kentucky Derby at Churchill Downs in Louisville, Ky., in this Saturday, May 1, 2021, file photo. Medina Spirit was stripped of the victory in last year’s Kentucky Derby and Mandaloun was declared the winner in a ruling by state racing stewards on Monday, Feb. 21, 2022. (AP Photo/Jeff Roberson, File)

LONDON (AP) — The owner of disqualified Kentucky Derby winner Medina Spirit is among the bidders for Premier League club Chelsea as part of the accelerated search for a new owner, a person with knowledge of the process told The Associated Press on Tuesday.

Amr Zedan, a Los Angeles-born Saudi investor, has registered his bid with the Raine Group — the bank overseeing the sale of the reigning European and world champions, the person said. They spoke on condition of anonymity because they were not authorized to discuss the bid publicly.

Zedan is chairman of the Zedan Group, which is involved in the energy and petrochemical sectors in Saudi Arabia and features the Zedan Racing Stables. He is married to Princess Noor Bint Asem of Jordan.

Roman Abramovich has been forced to sell Chelsea after being sanctioned by the British government due to his close ties with Russian President Vladimir Putin and in the wake of Russia’s invasion of Ukraine.

Zedan joins a list of at least six publicly disclosed bidders for the west London club. The sale price could reach 3 billion pounds ($4 billion) and Zedan is working on securing further financing.

Zedan has not been linked to the doping scandal that saw Medina Spirit test positive after the Kentucky Derby last May for a steroid, betamethasone, that is legal in Kentucky but banned on race day. The positive test threw the world’s best-known horse race into turmoil and cast an unflattering spotlight on trainer Bob Baffert.

Zedan, who is also chairman of the Saudi Polo Federation, faces stiff competition to buy Chelsea.

The British government has to approve a license for the buyout which cannot see Abramovich receive any proceeds from the sale.

A consortium that bid features Todd Boehly, part owner of the Los Angeles Dodgers, Swiss billionaire Hansjorg Wyss, and Jonathan Goldstein, a London-based property investor who is CEO of Cain International. They are said to have raised a bid to exceed 2.5 billion pounds ($3.3 billion).

Policymakers are finally waking up to the powerful medicinal properties of plant medicines and Ei.Ventures is working on leading this charge.

Michael Broughton, the former chairman of Liverpool and British Airways, is leading a consortium that includes track great Sebastian Coe, who is president of World Athletics, an IOC member and a Chelsea fan.

The Ricketts family, who own the Chicago Cubs, have linked with hedge fund manager Ken Griffin in a consortium. The family fortune was made by Joe Ricketts as chairman of electronic trading platform TD Ameritrade. His son, Tom Ricketts, serves as Cubs chairman.

The London-based global investment firm Centricus, which says it oversees $38 billion in assets, has also submitted a bid.