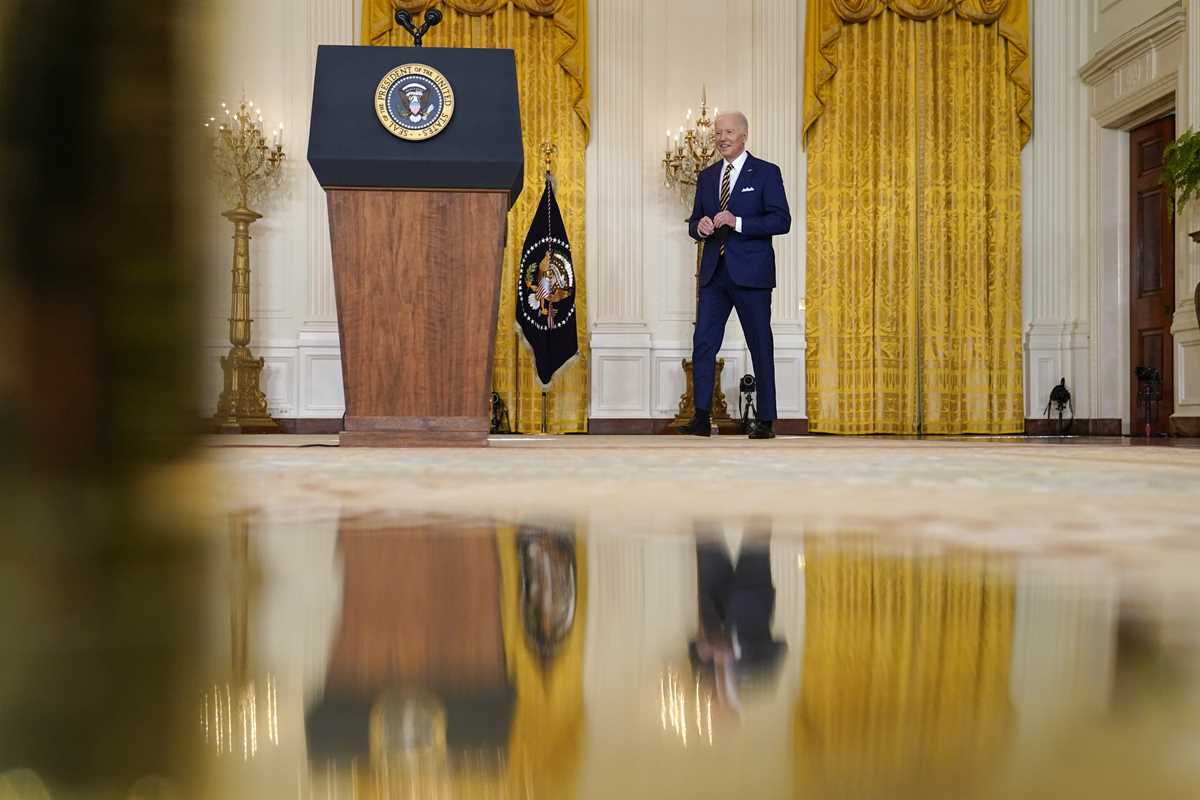 President Joe Biden arrives to speaks at a news conference in the East Room of the White House in Washington, Wednesday, Jan. 19, 2022. (AP Photo/Susan Walsh)

WASHINGTON (AP) — The U.S. Treasury Department levied new sanctions Thursday against four Ukrainian officials, including two current members of parliament who administration officials say are part of a Russian influence effort to set the pretext for further invasion of Ukraine.

The sanctions name parliament members Taras Kozak and Oleh Voloshyn and two former government officials. According to Treasury, all four have been intimately involved in disinformation efforts by Russia’s federal security service, known as the FSB.

Secretary of State Antony Blinken said the four men were at the heart of a Kremlin effort begun in 2020 “to degrade the ability of the Ukrainian state to independently function.”

The new sanctions were announced less than 24 hours after President Joe Biden said he thinks Moscow will newly invade Ukraine. He warned Russian President Vladimir Putin that his country would pay a “dear price” in lives lost and a possible restriction in access to the global banking system if it does.

Biden faced criticism from Republicans and Ukrainian officials that he invited a limited Russian invasion by suggesting in comments to reporters on Wednesday that the U.S. would react with a measured response if there was only a “minor incursion.” Administration officials immediately sought to clarify his remarks, and Biden himself did so on Thursday.

“I’ve been absolutely clear with President Putin,” Biden said Thursday. “He has no misunderstanding: any, any assembled Russian units move across the Ukrainian border, that is an invasion.”

Biden on Wednesday said his team is looking at possible sanctions against Moscow that would target the Russian banking system, restricting its ability “to deal in dollars.” Biden was referring to potentially limiting Russia’s access to “dollar clearing” — the conversion of payments by banks on behalf of clients into U.S. dollars from rubles or other foreign currency, according to a senior administration official who was not authorized to comment publicly.

Sen. Jeanne Shaheen, a New Hampshire Democrat who co-led a bipartisan congressional delegation to Ukraine last weekend, told reporters Thursday she understood the administration was still analyzing what the impact would be on other countries if Russia were banned from SWIFT, a banking system that handles the flow of money around the world.

Democratic Rep. Elissa Slotkin of Michigan in a Twitter posting urged the administration to take action that makes certain that “Russian oligarchs that support Putin” aren’t “able to spend their weekends shopping in Monaco and Paris.”

The White House last week warned that Russia has stationed operatives in and around Ukraine possibly to create a pretext for an invasion. U.S. and Ukrainian officials have also been concerned about the Russian weaponizing of disinformation.

“The United States is taking action to expose and counter Russia’s dangerous and threatening campaign of influence and disinformation in Ukraine,” Deputy Treasury Secretary Wally Adeyemo said in a statement. “We are committed to taking steps to hold Russia accountable for their destabilizing actions.”

Treasury officials say Voloshyn also worked with Konstantin Kilimnik, a Russian national who was previously sanctioned for allegedly attempting to influence the 2016 U.S. presidential election and passing on information to Russian intelligence.

Treasury also sanctioned Ukraine’s former deputy secretary for national security and defense councils, Vladimir Sivkovich. The administration says Sivkovich worked last year with a network of Russian intelligence activists to carry out influence operations that attempted to build support for Ukraine to officially cede Crimea to Russia in exchange for a drawdown of Russian-backed forces. Russian troops seized Crimea in 2014 and Russia then annexed the Black Sea peninsula.

The other former official cited is Volodymyr Oliynyk, who Treasury says worked at the direction of the FSB to gather information about Ukrainian critical infrastructure. Oliynk is currently living in Russia, according to Treasury.

Biden on Thursday noted that Russia “has a long history of using measures other than overt military action to carry out aggression.”

After his speculation about a “minor incursion” by Russia, Biden underscored that any invasion would be seen as violation of Ukraine’s sovereignty and would result in severe consequences for Russia. Nevertheless, his comments rattled Kyiv.

“We want to remind the great powers that there are no minor incursions and small nations,” Zelenskyy tweeted Thursday shortly before the new sanctions were announced. “Just as there are no minor casualties and little grief from the loss of loved ones.”

Some 100,000 Russian troops have massed near Ukraine’s border. Russian officials are demanding written guarantees that NATO will not expand westward. Members of the alliance refuse to give such a pledge.

7 Growth Stocks to Buy as the Market Slumps

At times of volatility, it can be hard for even experienced investors to stay the course. Yet over time, stocks have consistently increased in value. And growth stocks tend to be among the ones that show the largest gains. Growth stocks are companies that analysts believe will grow at a rate that is significantly above the market average.

These stocks are also characterized by companies that invest a significant portion of its profits back into its business in order to accelerate growth. This is opposed to value stocks that make returning a portion of its profits to shareholders a priority. This typically occurs in the form of a dividend.
One misconception of growth stocks is that they have a high correlation with the market. It’s true that when the market is moving higher, these stocks tend to outperform. However, when the market is moving lower, these stocks sometimes perform better.

So why should you consider buying growth stocks now? The reason is this. In many cases, the company’s underlying fundamentals are still positive, but the sentiment has changed. And that means it’s a good time to buy these stocks on sale.

View the “7 Growth Stocks to Buy as the Market Slumps”.