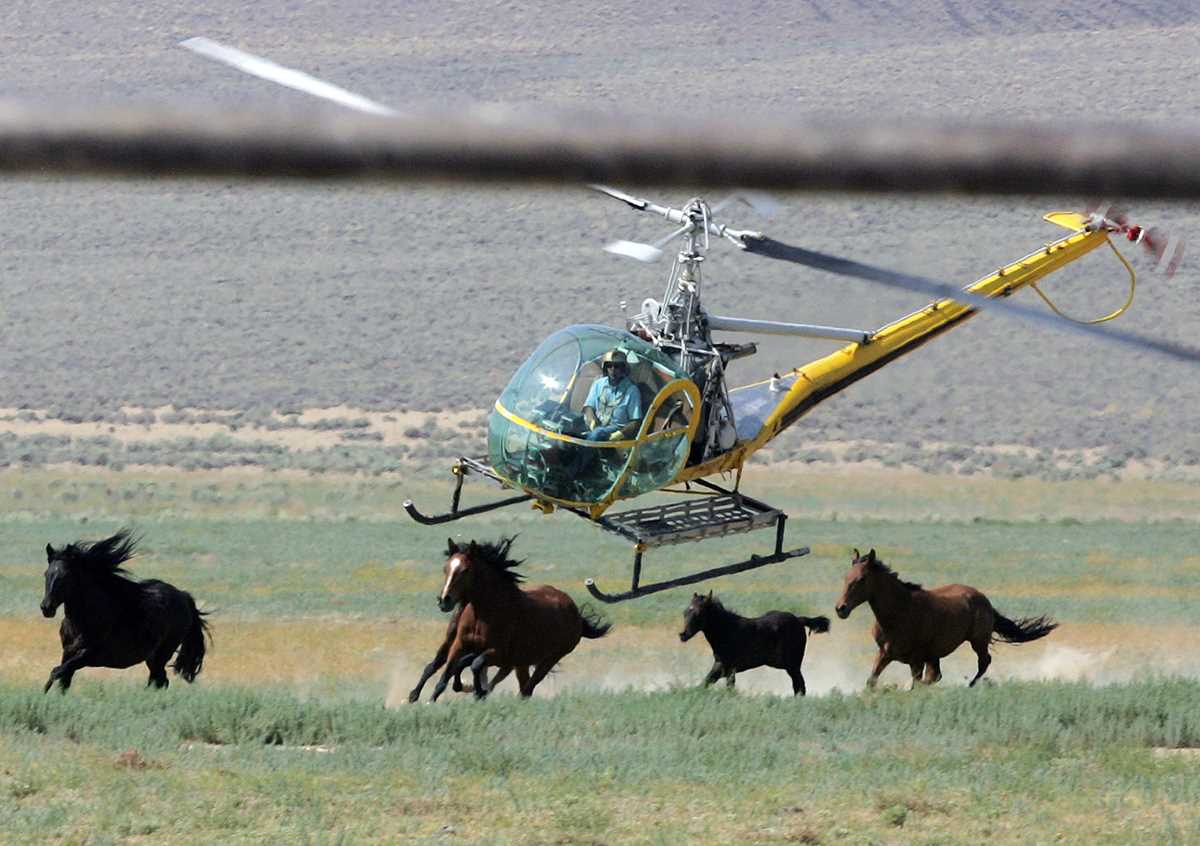 A livestock helicopter pilot rounds up wild horses from the Fox & Lake Herd Management Area on July 13, 2008, in Washoe County, Nev., near the town on Empire, Nev. The U.S. government plans to capture more wild horses on federal lands this year than ever before, drawing sharp criticism from mustang advocates who hoped the Biden administration would curtail widespread gathers of thousands of horses annually across the West. (AP Photo/Brad Horn, File) 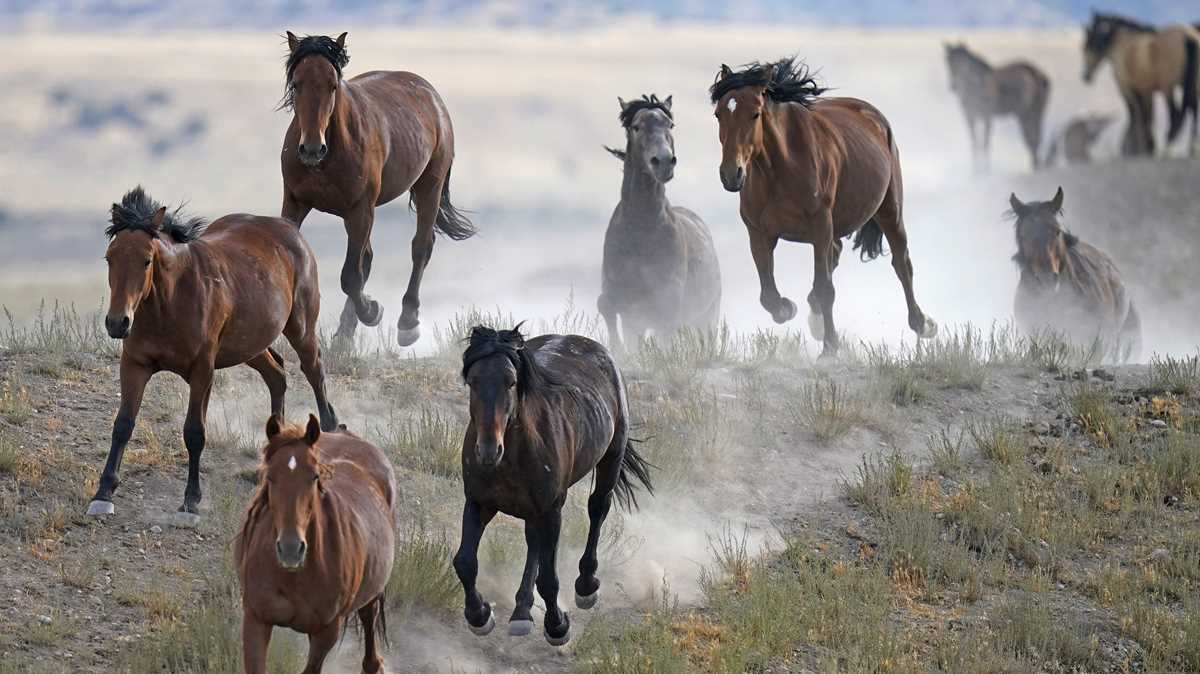 Free-ranging wild horses gallop from a watering trough on July 8, 2021, near U.S. Army Dugway Proving Ground, Utah. The U.S. government plans to capture more wild horses on federal lands this year than ever before in a single year, drawing outrage from mustang advocates who were counting on the Biden administration to curtail the widespread gathers of thousands of horses annually. (AP Photo/Rick Bowmer, File) 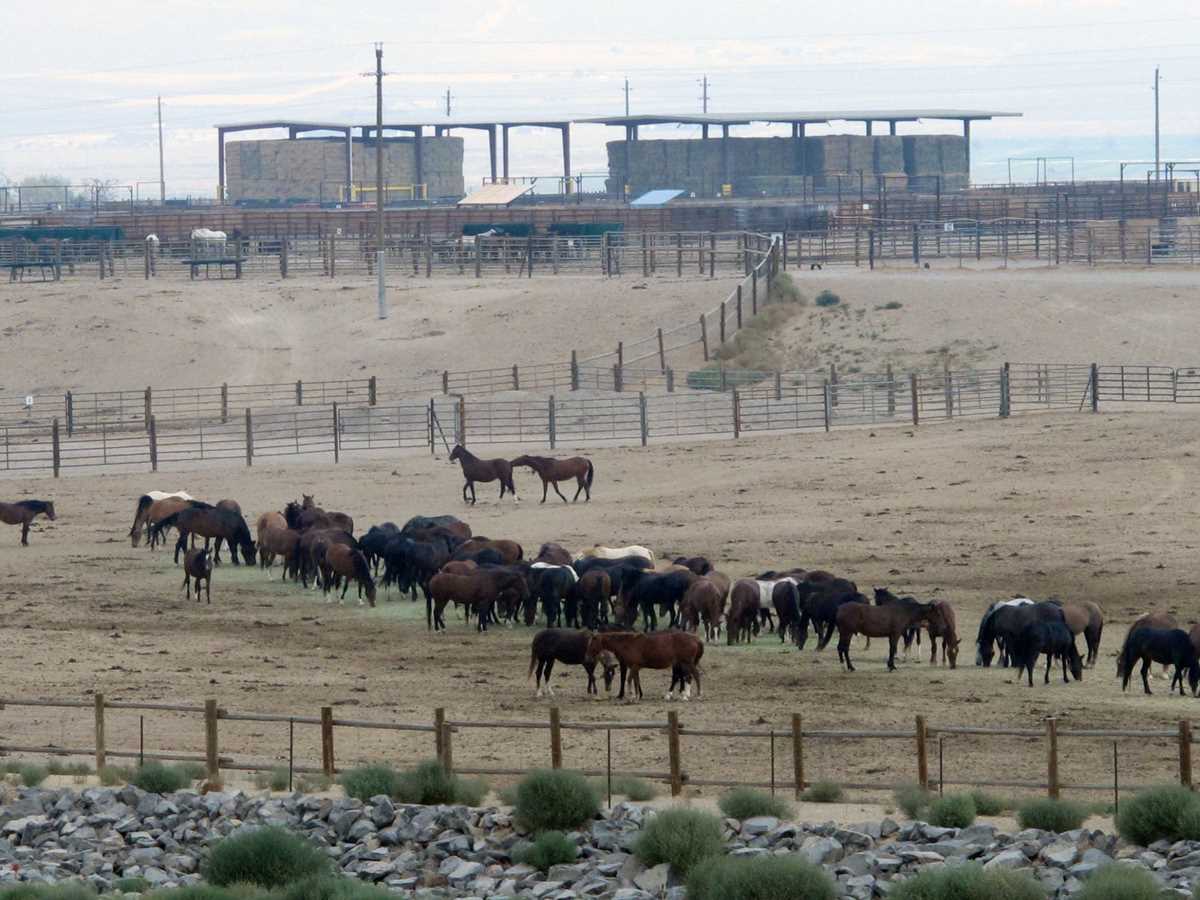 Mustangs, recently captured on federal rangeland, roam a corral at the U.S. Bureau of Land Management’s holding facility north of Reno, Wednesday, Sept. 4, 2013, in Palomino, Nev. The U.S. government plans to capture more wild horses on federal lands this year than ever before, drawing sharp criticism from mustang advocates who hoped the Biden administration would curtail widespread gathers of thousands of horses annually across the West. (AP Photo/Scott Sonner, File) 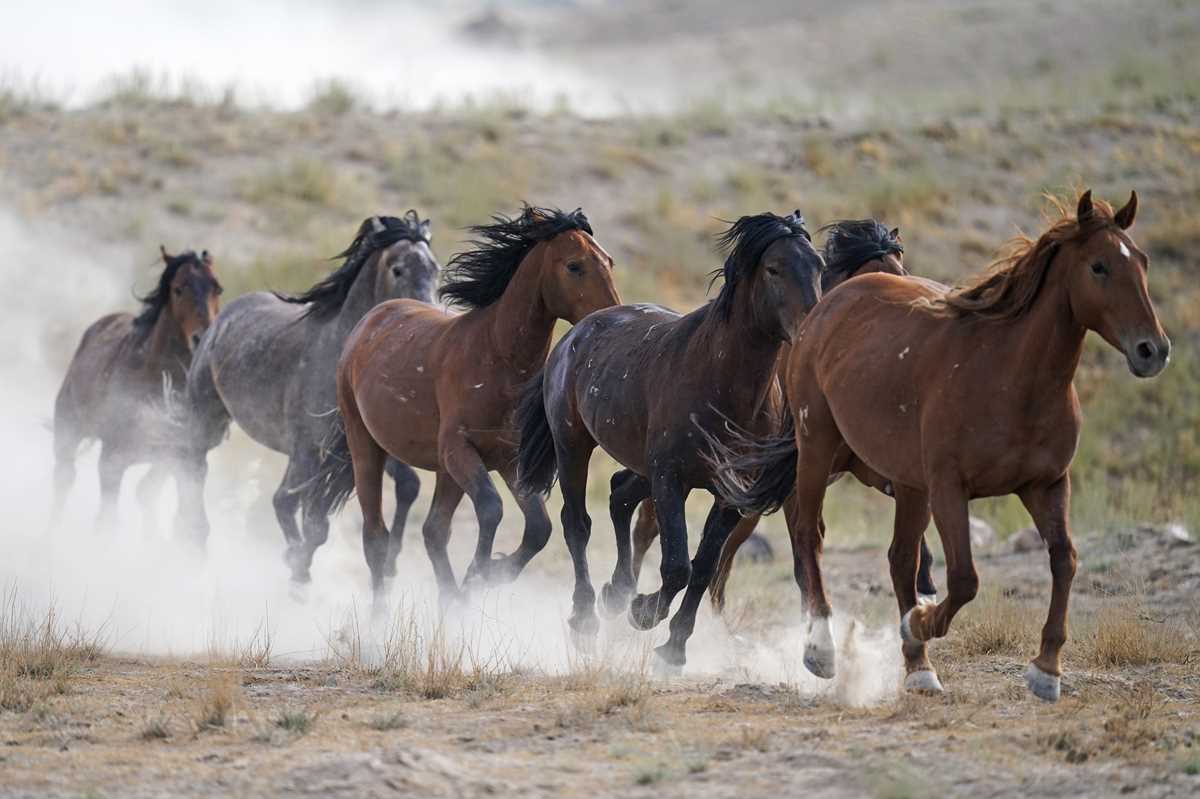 Free-ranging wild horses gallop from a watering trough on July 8, 2021, near U.S. Army Dugway Proving Ground, Utah. The U.S. government plans to capture more wild horses on federal lands this year than ever before, drawing sharp criticism from mustang advocates who hoped the Biden administration would curtail widespread gathers of thousands of horses annually across the West. (AP Photo/Rick Bowmer, File) 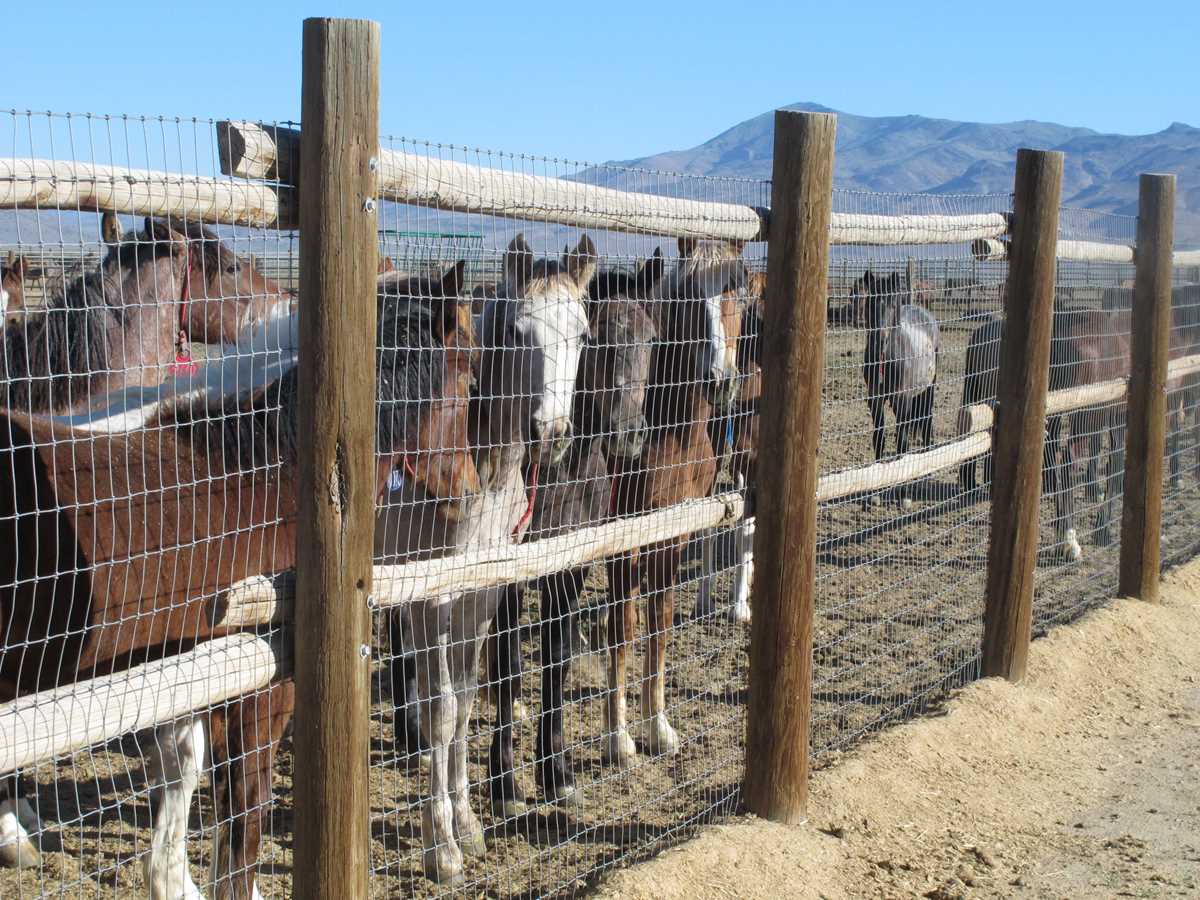 Horses stand behind a fence at the BLM Palomino Valley holding facility on June 5, 2013, in Palomino Valley, Nev. The U.S. government plans to capture more wild horses on federal lands this year than ever before, drawing sharp criticism from mustang advocates who hoped the Biden administration would curtail widespread gathers of thousands of horses annually across the West. (AP Photo/Scott Sonner, File)

RENO, Nev. (AP) — The U.S. government plans to capture more wild horses on federal lands this year than ever before, drawing sharp criticism from mustang advocates who hoped the Biden administration would curtail widespread gathers of thousands of horses annually across the American West.

Bureau of Land Management Director Tracy Stone-Manning, known as an ally of conservationists on several public land fronts when she was appointed in the fall, says the agency plans to permanently remove at least 19,000 horses and burros this year.

That’s 70% more than the previous high a year ago.

Critics say it’s a continuation of a decades-old policy that kowtows to ranchers who don’t want horses competing with their cattle and sheep for limited forage on agency rangeland in 10 states.

In Nevada, home to about half the 86,000 horses roaming federal lands, three groups have filed a lawsuit challenging what they say is the illegal, inhumane roundup of more than 2,000 horses that’s already underway near the Utah line.

Of the hundreds gathered so far, 11 have died, according to the agency’s website.

At least one death was a colt that continued to be pursued by a low-flying helicopter driving the herd toward a holding pen even though it had a “clearly broken” leg, according to the lawsuit. It says the colt suffered for at least 29 minutes before it was euthanized.

“It is more than disappointing that BLM will continue the charade that they care about wild horses,” said Laura Leigh, president of the Reno-based Wild Horse Education, one of the plaintiffs.

Bureau spokesman Jason Lutterman declined to comment in an email to The Associated Press.

Stone-Manning said in announcing the 2022 roundup plans earlier this month the animals’ population has declined since 2020 but is still triple what the government claims the land can sustain ecologically — something horse advocates dispute. The agency permanently removed 13,666 animals from the range in 2021.

Meanwhile, it says taxpayers continue to finance subsidies for the livestock industry through below-market grazing fees for millions of cattle and sheep causing more ecological harm than horses.

“Using drought as a fig leaf for its illegal actions, the bureau … is depopulating the West of its wild horses and burros herd by herd and burning through taxpayer dollars with their endless roundups and holding facilities,” said Wayne Pacelle, president of Animal Wellness Action, lead co-plaintiff with the New York-based CANA Foundation.

The National Cattlemen’s Beef Association says the horse activists are threatening the future of rangeland ecosystems and the well-being of the horses themselves.

“Groups who file lawsuits like this continue to prove that they’d rather draft emotional press releases than contribute to meaningful solutions,” said Kaitlynn Glover, the association’s director of natural resources.

Roundups are an important part of the process of bringing the horse herds into balance with the range, she said.

The agency’s 2022 strategy includes treating at least 2,300 animals with fertility control and releasing them back to public lands — an approach supported by some but not all horse advocates — to stem the growth of herds that otherwise double about every five years. That’s nearly double the previous high of 1,160 in 2021, the bureau said.

The agency acknowledges that, due partly to a sharp decline in demand for captured horses offered for public adoption over the past 10 years, it has been left in “the unsustainable position of gathering excess horses while its holding costs spiral upward.”

The lawsuit says the environmental assessment the bureau approved in May for the Nevada roundup described plans for a series of “phased gathers to remove excess animals” over a 10-year period, not “at once.”