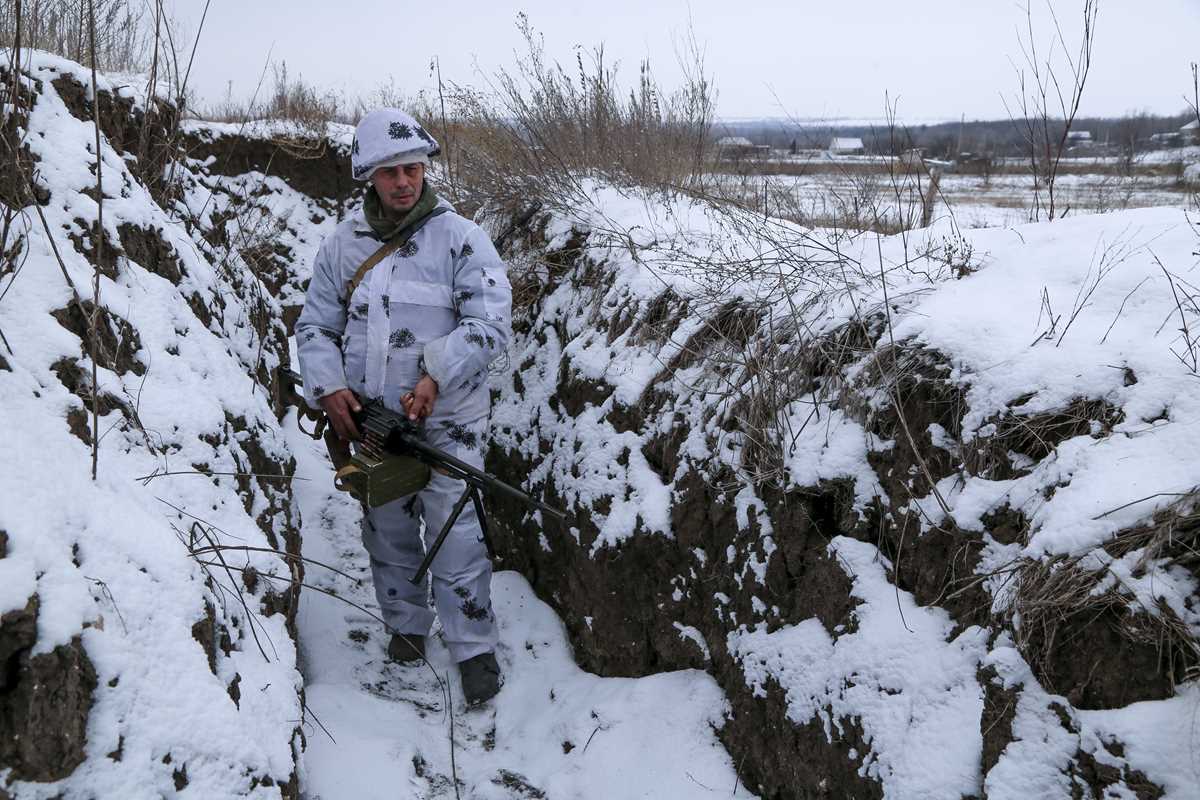 A Ukrainian serviceman patrols a street near the frontline with Russia-backed separatists in Verkhnotoretske village in Yasynuvata district, Donetsk region, eastern Ukraine, Jan. 22, 2022. Ukrainians in the country’s east are likely to be on the front lines of war if it comes, but they are far from the people making decisions about their fate. (AP Photo/Andriy Andriyenko, File) 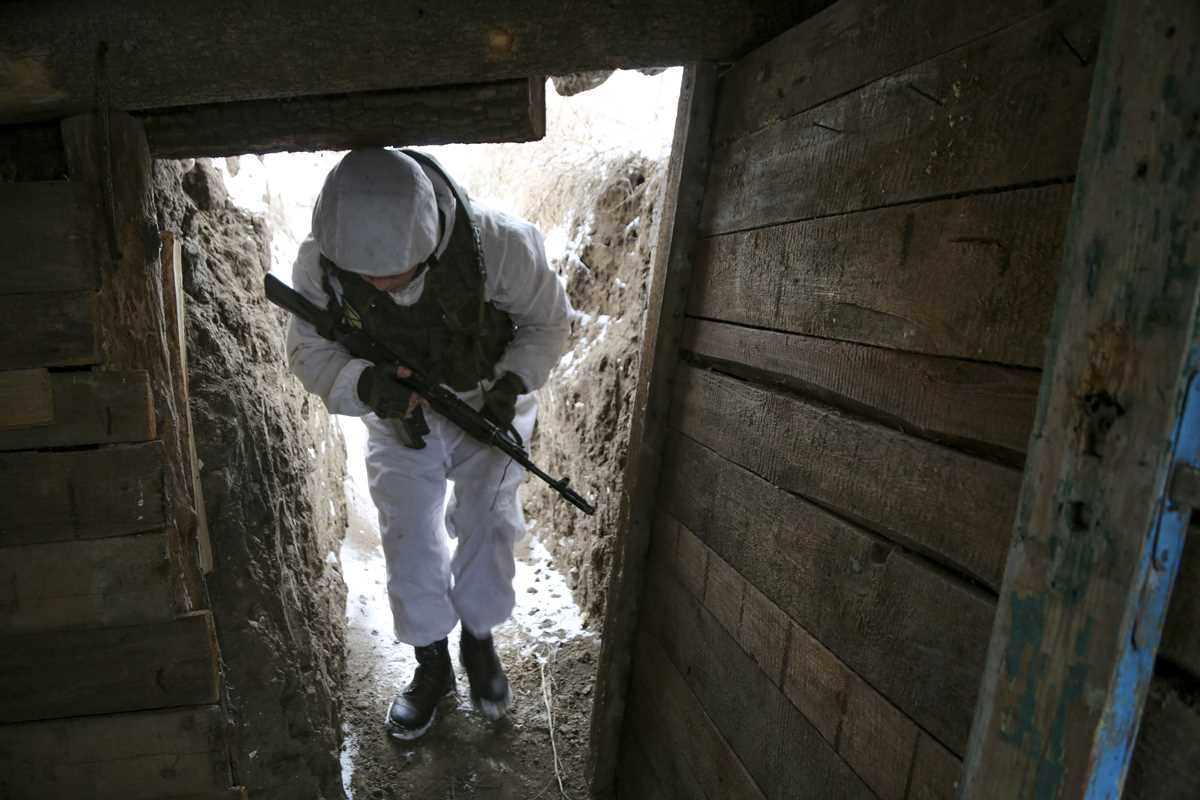 Ukrainian servicemen patrol a street toward the frontline with Russia-backed separatists in Verkhnotoretske village in Yasynuvata district, Donetsk region, eastern Ukraine, Saturday, Jan. 22, 2022. Ukrainians in the country’s east are likely to be on the front lines of war if it comes, but they are far from the people making decisions about their fate. (AP Photo/Andriy Andriyenko, File) 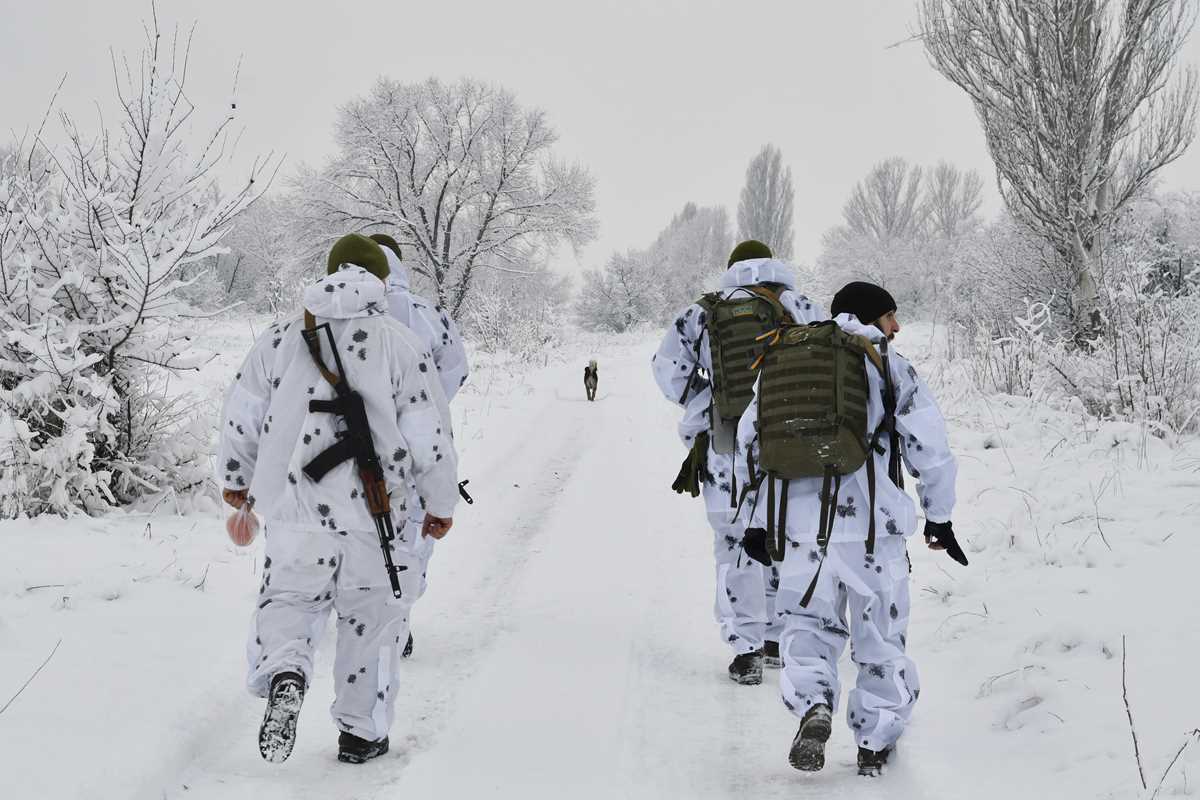 Ukrainian servicemen greet each other as they patrol a street in Verkhnotoretske village in Yasynuvata district, Donetsk region, eastern Ukraine, Jan. 22, 2022. Ukrainians in the country’s east are likely to be on the front lines of war if it comes, but they are far from the people making decisions about their fate. (AP Photo/Andriy Andriyenko, File)

The trenches are dusted with snow and tinged with soot and dirt. Dull colors will cling to them for weeks to come, as the men inside search for enough cellphone signal to hear the latest from the distant capitals that will decide their fate.

These Ukrainians are far from the Russian ships headed to a naval exercise off the coast of Ireland, from the American-built fighter jets streaming to the Baltics and from the U.S. aircraft carrier steadily sailing the Mediterranean.

As Western-supplied weapons land by the planeload in Kyiv, soldiers and civilians alike wait here with helpless anticipation for decisions made by people who know little about Ukraine and even less about the eastern front lines — a battle-weary region near where Russia has massed tens of thousands of soldiers in a troop buildup that U.S. President Joe Biden said could mount the largest invasion since World War II.

The soldiers in Zolote 4 have been defending against Russian encroachment for years. They are just a few hundred meters from pro-Russia separatist fighters, who are on the other side of a checkpoint that no one can safely cross. The soldiers assume that’s where the snipers are, though they’ve never seen any gunmen.

After three days with no shooting, “all of a sudden they opened up with grenade launchers and firearms. One mortar shell flew over and fell in the field behind us. Two more hit between ours and the next position. In 15 minutes, everything was quiet again. Why? What for? Nobody knows. And that’s how it is around here,” said Oleh Surhov, a Ukrainian soldier who fled Crimea in 2014 after the Russians seized the peninsula. He joined the fight soon after he evacuated his wife, children and grandchildren to western Ukraine.

Zolote 1 through 5 got their names decades ago during the Soviet era — the name means “Golden” — when they were labeled as units of the local coal mining operation. Now 1 through 4 are in Ukraine and 5 sits less than a kilometer (half-mile) away, across the checkpoint.

The sense of waiting for someone else’s decisions has also infected the nearby village of Katerynivka, which bears the scars of eight years of shelling. It has newer trenches, which are heated by rough wood stoves whose warmth draws nearly as many dogs and cats as soldiers. The luckiest trench cats get taken back by soldiers when they rotate off the front.

“We joke that hope is the last thing to die. All of us are waiting for peace. Neither our children nor grandkids can visit us,” said Liubov, a local woman who wouldn’t give her last name. “We talk on the phone and that’s enough. Let’s wait until peace comes!”

If war comes instead, it is as likely as not to strike first in eastern Ukraine, where the pro-Russia separatists have been in control since 2014. In Russia, across the border, more than 100,000 troops are gathering, and thousands more are going into position for what Russia says are military exercises on Ukraine’s border to the north with Belarus.

Moscow denies it is planning an assault, but the United States and its NATO allies are preparing for a possible war, bolstering their presence in the Baltics and putting 8,500 American troops on higher alert for potential deployment to Europe. Britain and the U.S. have sent multiple planeloads of weapons to Ukraine.

Ukrainian officials have accepted the help but found themselves on the sidelines of several rounds of high-stakes diplomacy that so far have not yielded a breakthrough. “Nothing about Ukraine without Ukraine,” U.S. Secretary of State Antony Blinken said early this month after one such meeting.

On Monday, the White House summoned European leaders, including NATO’s secretary-general, to a videoconference about Ukraine to discuss U.S. ideas on how to respond to Russia’s demands.

“We have shared those ideas with our European allies and partners,. We are taking their feedback. We are incorporating that feedback into the written response,” U.S. State Department spokesman Ned Price said.

Ukraine wasn’t invited to the videoconference. And Ukraine’s president was left to fume on Twitter last week when Biden mused aloud about how to respond to a “minor incursion.”

Ukrainian and Russian diplomats are scheduled to meet Wednesday in Paris to discuss the prospects for a stalled 2015 peace deal brokered by France and Germany to end the conflict in eastern Ukraine. If Ukraine sometimes seems to be an afterthought for the powerful countries deciding its fate, the country’s east is even farther from the centers of power.

In Vesele, a separatist area in the eastern Donetsk region, little has changed since the fighting in 2014. Signs still warn about minefields. Concrete block buildings have only crumbled further in the years since they were shelled, and no one has come to tow away the cars hastily abandoned under gunfire.

“There is practically no one here, because everything is broken. There is light, gas, water supply, but there is no life,” said Vladimir, a local man who refused to give his last name. He estimated Ukrainian troops were about a kilometer (half-mile) away, and he wanted them gone so people could decide their own fates.

“If they would completely leave and liberate” the Donbas region in eastern Ukraine, “then we could decide. I think nobody wants (to be a part of) Ukraine here,” he said.

But he, like most in the east, believed those decisions were in someone else’s hands.

7 Cyclical Stocks That Make Sense In a Volatile Market

Despite many predictions of an imminent, and possibly severe, market correction, 2021 has been a great year for investors. And that’s particularly true for investors who invested in cyclical stocks. This group of stocks was hit hard as the economy ground to a halt. This makes sense because cyclical stocks move in the direction of the broader economy.

But that’s also why, almost immediately, many of these stocks began to come back. And with the economy reopening, these stocks continue to show strength.

Cyclical stocks are commonly dividend into companies that manufacture durable goods, non-durable goods, or deliver services. At any given time, one or more of these sectors has outperformed others. But for the most part investors that bought into cyclical stocks continue to be rewarded.

In this presentation, we’ll take a look at seven cyclical stocks that are proving to be resilient even as the market continues to baffle even the most experienced investors.

View the “7 Cyclical Stocks That Make Sense In a Volatile Market”.