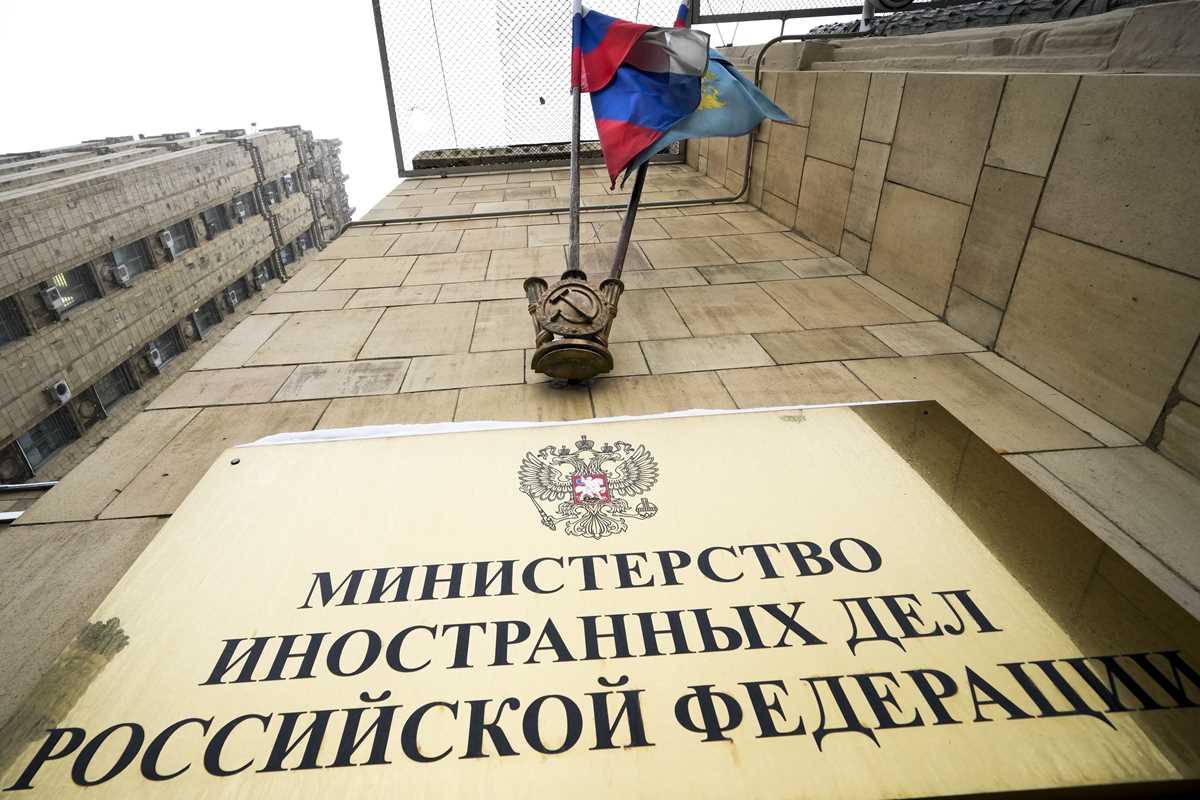 A Russian national flag flutters in the wind next to the sign of the Russian Foreign Ministry building in Moscow, Russia, Wednesday, Jan. 26, 2022. Russian Foreign Minister Sergey Lavrov said he and other top officials will advise President Vladimir Putin on the next steps after receiving written replies from the United States to the demands. Those answers are expected this week — even though the U.S. and its allies have already made clear they will reject the top Russian demands. (AP Photo/Alexander Zemlianichenko) 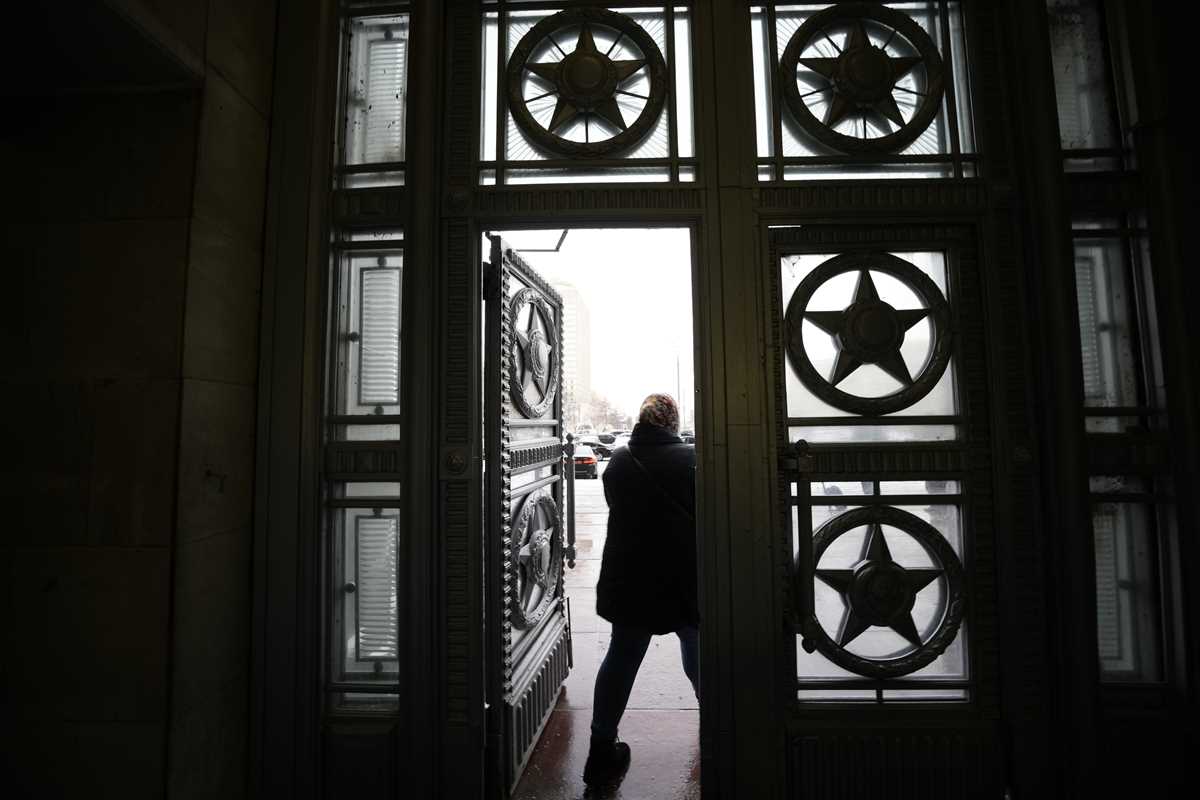 A woman leaves the Russian Foreign Ministry building in Moscow, Russia, Wednesday, Jan. 26, 2022. Russian Foreign Minister Sergey Lavrov said he and other top officials will advise President Vladimir Putin on the next steps after receiving written replies from the United States to the demands. Those answers are expected this week — even though the U.S. and its allies have already made clear they will reject the top Russian demands. (AP Photo/Alexander Zemlianichenko) 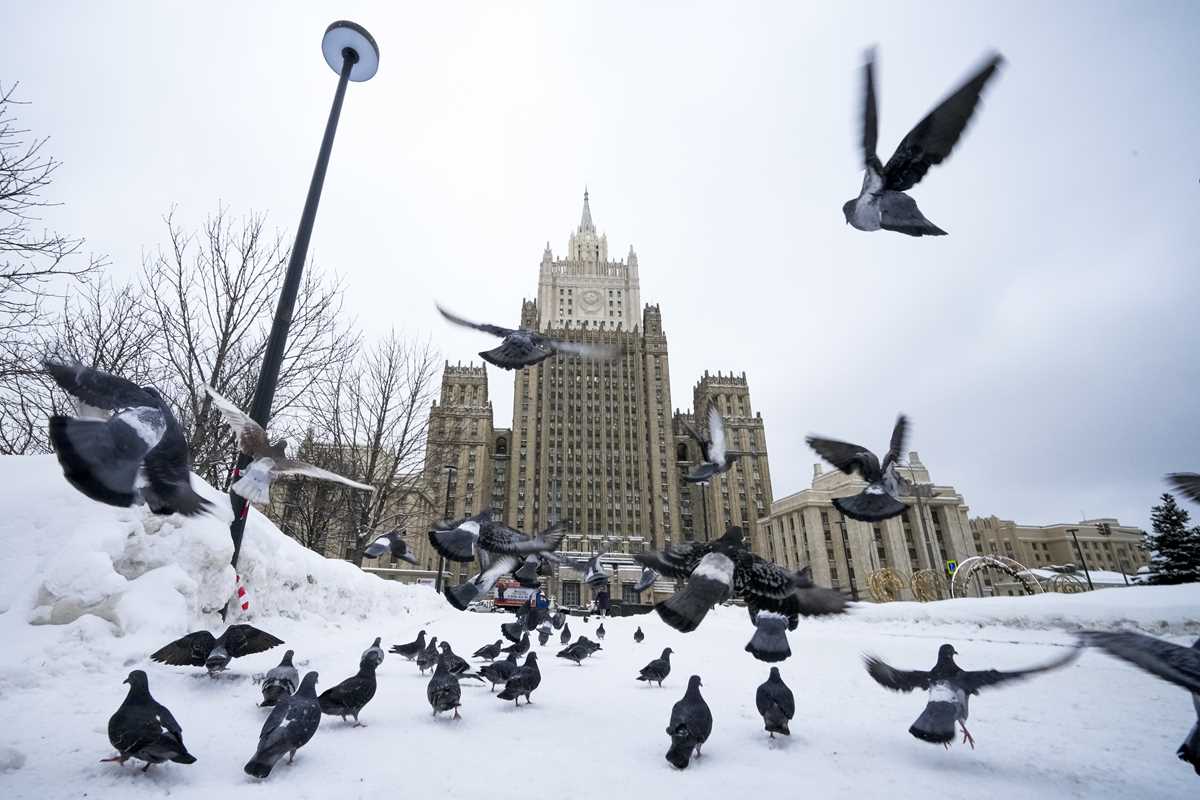 Pigeons take off in front of the Russian Foreign Ministry building in Moscow, Russia, Wednesday, Jan. 26, 2022. Russian Foreign Minister Sergey Lavrov said he and other top officials will advise President Vladimir Putin on the next steps after receiving written replies from the United States to the demands. Those answers are expected this week — even though the U.S. and its allies have already made clear they will reject the top Russian demands. (AP Photo/Alexander Zemlianichenko)

WARSAW, Poland (AP) — Russia has placed more than 100,000 troops near Ukraine’s border and ratcheted up war games in the region.

Moscow denies it is planning an assault, but the United States and its NATO allies fear that Russia is planning for war — and are making preparations of their own.

Here are things to know about the international tensions over Ukraine, a crisis reminiscent of the Cold War.

WHAT IS RUSSIA’S LATEST MOVE?

Russia has increased its pressure on the West, warning that it would quickly take “retaliatory measures” if the U.S. and its allies reject its security demands and continue their “aggressive” policies over Ukraine.

Russia has demanded guarantees that NATO never admit Ukraine and other ex-Soviet nations as members and that the alliance roll back troop deployments in other former Soviet bloc countries, a region Moscow still views as its sphere of interest.

Some of the demands, like the membership pledge, are nonstarters for NATO, creating a seemingly intractable stalemate that many fear can only end in a war.

Russian Foreign Minister Sergey Lavrov said he and other top officials will advise President Vladimir Putin on the next steps after receiving written replies from the United States to the demands. Those answers are expected this week — even though the U.S. and its allies have already made clear they will reject the top Russian demands.

WHAT DO UKRAINIAN LEADERS SAY?

Ukrainian officials have sought to calm nerves as tensions escalate.

Ukrainian Foreign Minister Dmytro Kuleba said Wednesday that while the concentration of Russian troops near Ukraine poses a threat, “their number is now insufficient for a large-scale offensive.”

“They are still missing some key military elements and systems to mount a big, full-scale offensive,” Kuleba told reporters.

He also noted that causing alarm could be an end in itself. Russia, he said, hopes to destabilize Ukraine by “spreading panic, raising pressure on Ukraine’s financial system and launching cyberattacks.”

WHAT IS THE MOOD ON UKRAINE’S FRONT LINE?

Soldiers and civilians in eastern Ukraine are waiting with helpless anticipation to see if war comes.

They understand that their fate is being decided by politicians in distant capitals. Even politicians in their own capital, Kyiv, have found themselves on the sidelines of several rounds of high-stakes diplomacy that so far have not yielded a breakthrough.

The battle-weary region has been fighting pro-Russia separatist fighters since 2014. It is an area close to where Russia has massed tens of thousands of soldiers in a troop buildup that U.S. President Joe Biden says could mount the largest invasion since World War II.

WHAT IS HAPPENING ON THE DIPLOMATIC FRONT?

Presidential advisers from Russia, Ukraine, Germany and France are holding diplomatic negotiations in Paris amid the growing worries that Russia could invade Ukraine.

The talks are taking place in the so-called “Normandy format,” which helped to ease hostilities in 2015, a year after Putin ordered the annexation of Ukraine’s Crimean Peninsula and the Russia-backed insurgency began in eastern Ukraine.

Several rounds of high-stakes diplomacy have failed to yield any breakthroughs, and tensions escalated further this week.

WHAT DOES BRITAIN SAY?

British Foreign Secretary Liz Truss has urged European nations to do more to support Ukraine, saying “we would like to see our allies do more to help supply defensive support to Ukraine.”

The U.K. has sent anti-tank weapons to Ukraine in response to Russia massing troops near its border. It has ruled out sending combat troops, but Truss said Britain has “ruled nothing out in terms of sanctions.”

“In fact, we’ll be legislating to toughen up our sanctions regime and make sure we are fully able to hit both individuals and companies and banks in Russia in the event of an incursion,” she told the BBC.

“What’s important is that all of our allies do the same, because it’s by collective action, by showing Vladimir Putin we’re united, that we will help deter a Russian incursion.”

WHAT IS GERMANY DOING?

Among the NATO allies, Germany in particular has faced calls to help Ukraine more and been faulted for a perception that it is prioritizing its economic ties with Russia over Ukraine’s security.

Amid that backdrop, German Defense Minister Christine Lambrecht said Germany will deliver 5,000 military helmets to Ukraine following a request from the country’s embassy. She said that it was “a very clear signal that we stand by your side.”

Ukraine’s ambassador to Germany welcomed the planned delivery of the helmets but described it as a “purely symbolic gesture.” Andriy Melnik told German news agency dpa that “this is only a drop in the ocean.”

He added that “Ukraine expects a 180-degree turn from the German government, a real paradigm change.”

Germany has said that it won’t deliver lethal weapons to Ukraine.

Yet German Foreign Minister Annalena Baerbock insisted Wednesday that the European Union’s common goal in the Ukraine crisis “is and remains the defense of Ukraine’s sovereignty and territorial integrity.”

WHAT DOES POPE FRANCIS SAY?

Pope Francis prayed that political leaders put aside personal interests and let dialogue prevail amid concerns of a Russian invasion of Ukraine.

Francis kicked off a daylong prayer for peace in Ukraine on Wednesday with a special appeal at the end of his weekly general audience. “Please, never again war,” Francis said.

“May our prayer and invocations to the heavens touch the hearts and minds of those responsible on Earth, that they make dialogue prevail and that the good of all be put before interests of one side,” he said. “Let us insistently ask the Lord that in this land may fraternity overcome wounds, fears and divisions.”

“They deserve peace,” he said.

7 Stocks That are Ready For a Santa Claus Rally

With the end of the year approaching, many investors are looking to rebalance their portfolios. That typically means casting a critical eye at some of your strong performers and making a decision on whether they will move higher. And one thing that can dip the balance in favor of retaining a stock is the likelihood of a Santa Claus rally.

The technical definition of a Santa Claus rally is a rally that starts in the last few trading days of the year after the Christmas holiday. In recent years, however, that definition has been expanded to take into account a December rally. And with Black Friday beginning earlier and earlier and really not ending until after the holiday’s end, this makes some sense.

So will there be a rally in 2021? I wouldn’t bet against it. The market continues to want to move higher and January is historically a strong month for stocks. With that said, we believe quality should still matter. Here are seven stocks that stand to benefit with or without a Santa Claus rally.

View the “7 Stocks That are Ready For a Santa Claus Rally”.