I’ve spent a great deal of time over the past few days talking about the choppiness in the market and the different ways we, traders, can address it.

See, chop, much like any other market environment, is a curse for some, but an absolute blessing for others.

If you’re a portfolio manager or have major long-side exposure, right now is definitely not a fun time for you.

But if you excel in very short-term, intraday technical setups – you really can’t ask for much more than the current market action.

Luckily for you, we happen to have a guy who does just that, and his name is Davis Martin!

Here’s how Davis’s been trading lately…

Davis Martin is one of those guys who trades just one symbol… and it’s not a bad thing, not in his case at least!

See, Davis found a niche where he excels and now makes the most out of his expertise, while continuously growing his skill.

His weapon? The SPY itself!

In a way, he’s akin to a sniper – he spends a lot of time on the sidelines, but when he strikes – he hits!

And the current market volatility has been nothing short of a blessing for him and his strategy.

Let me show you one of his recent trades…

EMA crossovers in some shape or form are among the most “classic” trades out there.

The basics behind it are simple:

But obviously, this is a very general framework – it takes a lot more to turn this into an actual strategy.

In the case of Davis, he likes to use his 3/8 EMA Crossover when the general market is particularly weak or particularly strong.

He also picks chart points where his risk is tight and well defined, hence, he can get a favorable risk/reward ratio.

Last, he spends a lot of time on general market research – he always makes sure global macro events align in his favor.

As you can imagine, the recent clear weakness in the broad market has given him plenty of opportunities.

Here’s a trade he did just yesterday:

Davis noted that the general SPY trend over the past few days was down and every pop was getting sold.

Hence, he was eager for SPY to give him an opportunity to bet on the downside the next time it pops.

Luckily for him, yesterday the market did just that: 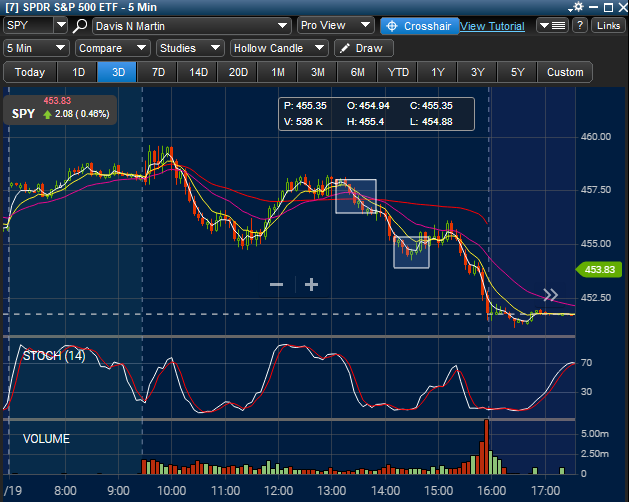 SPY sold off in the AM but was able to gain some traction by midday – printing a nice consolidation right above VWAP.

If you look at the top square on the chart, you’ll note that right as it breaks down the consolidation and VWAP, the shorter-term 3-day EMA breaks below the longer-term 8-day EMA – a bearish reading.

This is exactly what Davis wanted for an entry – his stop was right, right above VWAP and his target was the retest of the day’s low.

I’ll let his trade records do the rest of the talking:

Come check Davis in The Market Navigator – his live trading room and see for yourself if his strategies are something you can add to your arsenal.

And if you crave even more readings from our SPY expert Davis CLICK HERE!