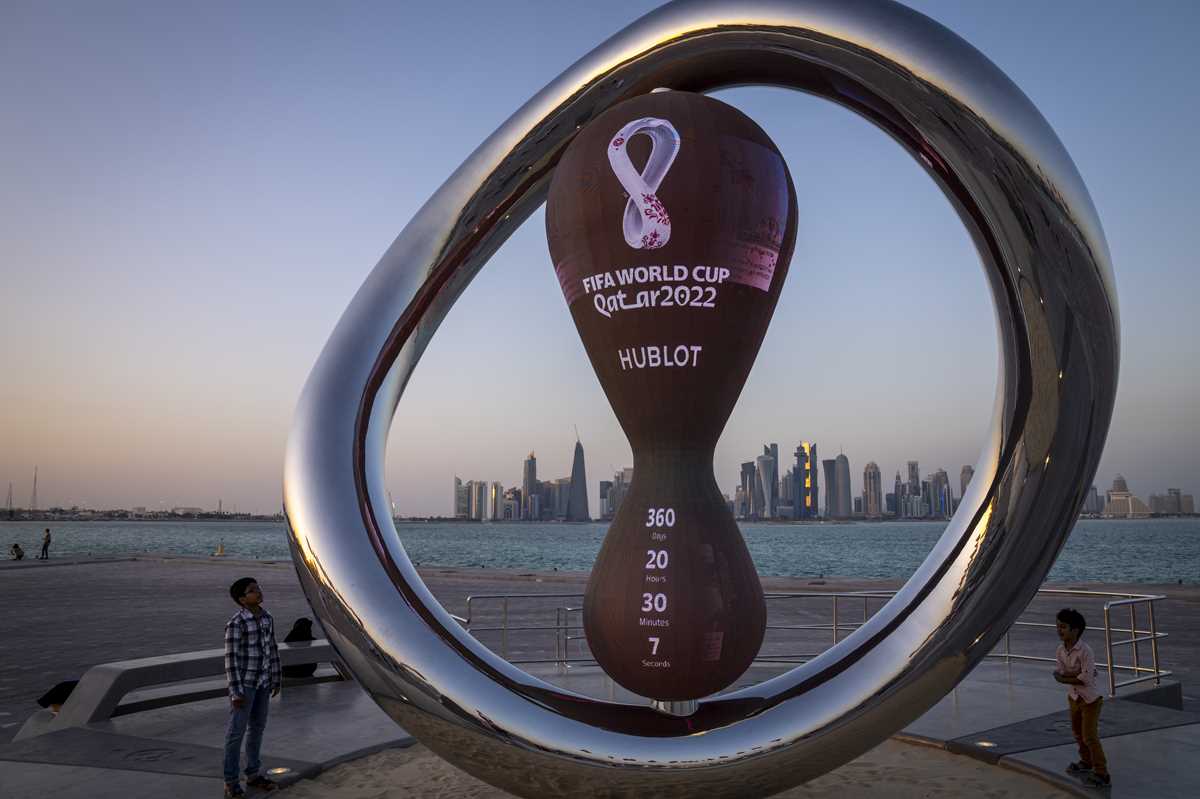 Children stand next to the official countdown clock showing remaining time until the kick-off of the World Cup 2022, in Doha, Qatar, Nov. 25, 2021. Fans can start registering for the lottery to buy Qatar World Cup tickets Wednesday, Jan. 19, 2022. FIFA tickets will be distributed through a ballot process rather than an open sale for the Nov. 21-Dec. 18 tournament. (AP Photo/Darko Bandic, file)

The cost of attending the World Cup final is up to 46% higher in Qatar than the previous tournament in Russia, fans discovered Wednesday as tickets went on sale.

The steep rise in the prices for the FIFA showpiece match since 2018 contrasts with the group stage — apart from the opening game — and round of 16 seeing a reduction in the cost of the cheapest tickets, which fans can apply for online.

Supporters requesting to attend matches at the Middle East’s first World Cup will only discover if they are successful based on a random draw at the conclusion of the first application phase which runs through Feb. 8.

The ticket process is beginning with only 13 of the 32 slots at the tournament filled and qualifying not concluding until the intercontinental playoffs in June. Applications in the first phase of ticket sales can be made on the FIFA website until Feb. 8 with fans notified if they have been successful in the random draw selection by March 8.

The draw for the tournament is scheduled for April 1 in Doha, the capital of the tiny oil-and-gas rich Persian Gulf nation.

As well as applying for tickets for individual games, fans can register to follow their team throughout and to watch four matches in four different stadiums.

FIFA aims to generate $500 million from hospitality rights and ticket sales from across the eight stadiums in Qatar which are within a 30-mile radius of Doha.

The launch of ticket sales will be the first gauge of interest in attending arguably the most controversial tournament since the World Cup was first staged in 1930.

Some fans could still be deterred from flying to the World Cup after a decade of criticism of Qatar’s treatment of the migrant workers, who are largely from southwest Asia and have been relied on to build up the infrastructure since winning the FIFA hosting rights in 2010.

Even if fans want to go, there is a shortage of accommodation with no hotels available to book yet having all been reserved by organizers.

The range of ticket prices in U.S. dollars for international fans, converted from Qatari riyals, compared to the cost in Russia in 2018:

Rob Harris is at https://www.twitter.com/RobHarris

Climate change remains a polarizing political issue. However, as an investor, it’s a debate that bears watching. And that’s not just the case for environmental, social, and governance (ESG) investors. Every investor that’s looking to profit from the current $3.5 trillion infrastructure bill needs to pay attention to the current debate about climate change.

That’s because right now the business of climate change is beginning to catch up to the emotion. And that makes it a good time to invest in the clean energy sector. This includes solar and wind stocks. But it also includes other related sectors such as electric vehicle charging and other renewable energy sources such as renewable natural gas (RNG).

That’s the topic of this special presentation which looks at 7 clean energy stocks that look like strong buys as the Biden administration looks to pass its sweeping infrastructure bill.

Investors need to be able to skate to where the puck is moving. For years, climate change initiatives have been bogged down by the reality that the technology was not ready to meet the moment. That is rapidly becoming a non-issue. And that makes this sector one that investors can’t afford to ignore.

View the “7 Clean Energy Stocks to Buy As Climate Change Initiatives Heat Up”.