The SPDR S&P 500 SPY opened higher on Tuesday and was running up over 1% intraday, which helped the ETF to blast through resistance at the 200-day simple moving average (SMA).

The 200-day SMA is an important bellwether indicator that marks the turning point between what is considered a bull versus a bear market. When the SPY fell through the 200-day on Jan. 21 and again on Feb. 11, fears that a long-term bear market would take hold gripped traders and investors.

That fear grew when Russia invaded Ukraine on Feb. 23 but culminated on March 16 and 17 – the two days the Federal Reserve met, and consequently decided to raise its target interest rate to between .25bps and .5bps. The bullish reaction to the Fed’s decision surprised some traders and investors because most expected a more dovish .25% hike.

See Also: The Stock Market Is Looking Bullish, But When Is The Right Time To Buy?

The SPY Chart: On March 14, the SPY suffered a death cross on the daily chart, where the 50-day SMA crossed below the 200-day. Now that the SPY has regained the 200-day SMA as support, the 50-day SMA could cross back above it, which will create a bullish golden cross and give traders and investors more confidence going forward.

If the SPY closes the trading day near its high-of-day, it will print a bullish Marubozu candlestick on the daily chart, which could indicate higher prices will come again on Wednesday. Alternatively, Wednesday could become a day for consolidation and the ETF could print an inside bar pattern, which in this case would lean bullish for Thursday.

If the SPY closes the trading day at or below the $448 level, it will print a shooting star candlestick, which could indicate a retracement is in the cards. A retracement down toward the eight-day exponential moving average (EMA) would still be bullish because it would cause the SPY to print a higher low to confirm the new uptrend. Bullish traders who are not already in a position could watch for a reversal candlestick, such as a doji or hammer, to print on the next pullback to enter into a position.

The SPY is trading above the eight-day and 21-day EMAs, with the eight-day EMA trending above the 21-day, both of which are bullish indicators. If the SPY is able to remain above the 50-day SMA, the indicator will begin to curl upwards, which could give more aggressive traders a cue a golden cross is more likely. 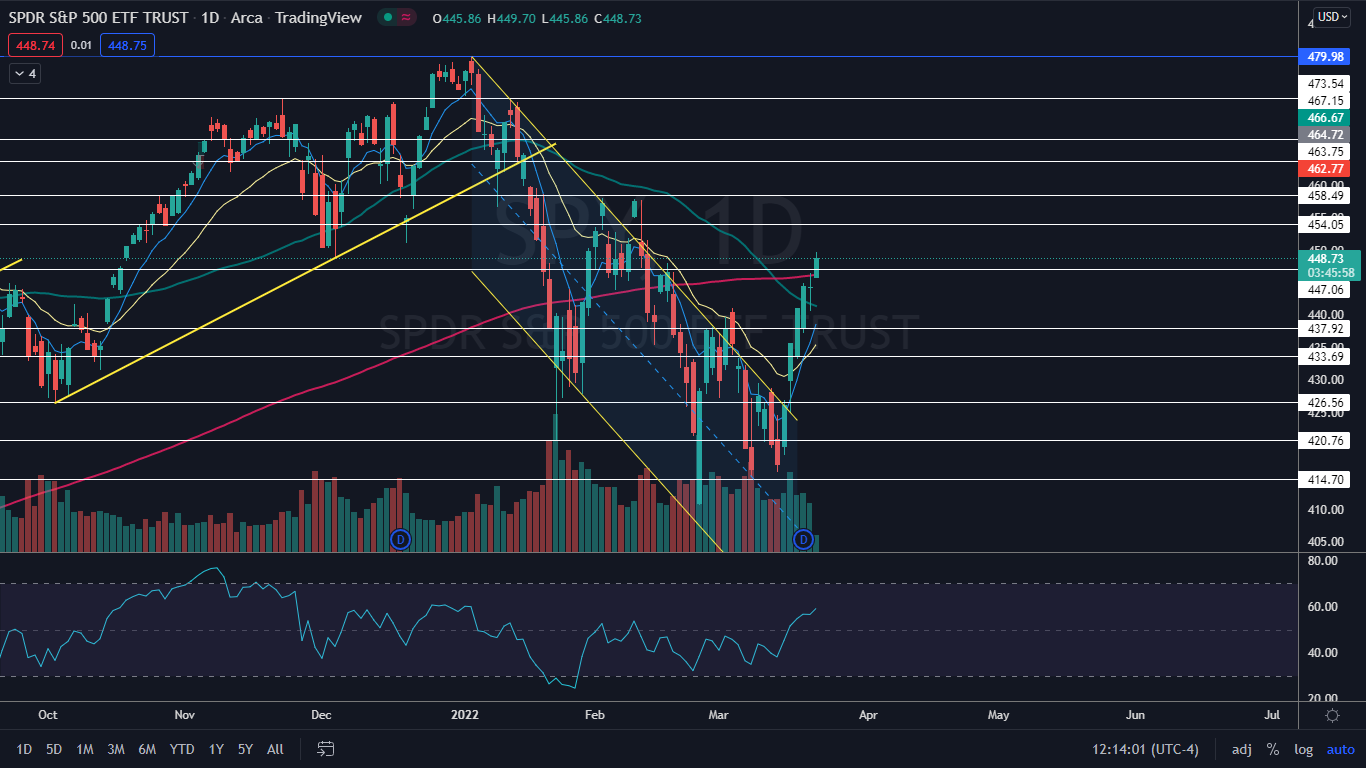