Get The Full Ray Dalio Series in PDF

Get the entire 10-part series on Ray Dalio in PDF. Save it to your desktop, read it on your tablet, or email to your colleagues

Robotaxis: Have Google And Amazon Backed The Wrong Technology?

1) A smart report in the FT (attached), which echoes what my analyst Kevin DeCamp thinks (see his report, which I sent around on June 7). Excerpt: 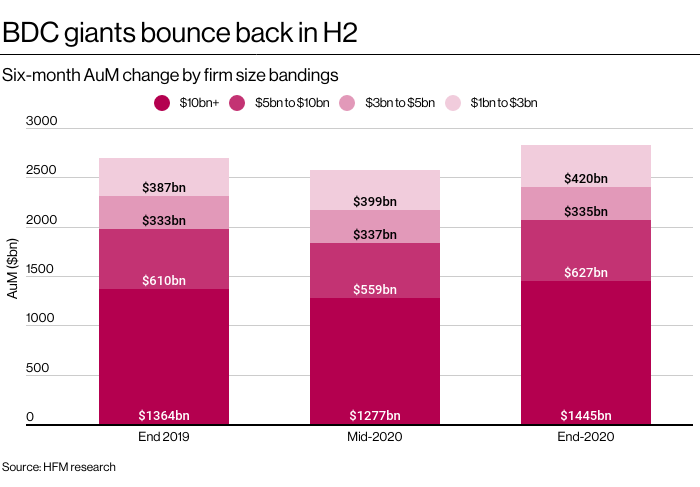 Since Google launched its self-driving car project in 2009, the biggest challenge has been one of technology: can it be safe enough to deploy at scale?

That dispute is over. Google’s project, now branded Waymo, has experienced only minor incidents — about once every 210,000 miles — since 2019 when it began operating a driverless service in Phoenix, Arizona. Cruise, its GM-backed rival, received a permit last month to begin commercial operations in its home city, San Francisco. Both groups are valued at more than $30bn by the most reputable names in venture capital and tech.

This Arizona College Student Has Taken Over 60 Driverless Waymo Rides

2) More on this topic: This Arizona college student has taken over 60 driverless Waymo rides. Excerpt:

Waymo has long kept details about its industry-leading self-driving technology under wraps. The company has done millions of miles of testing in Arizona and California—including thousands of driverless miles with no one behind the wheel. But until last month, almost everyone who experienced those driverless rides was bound by a strict non-disclosure agreement.

In October, Waymo finally pulled back the curtain on its driverless technology. Today customers near the Phoenix suburb of Chandler can hail a fully driverless taxi. They can record rides, publish videos, and talk to reporters about their experiences.

One young Arizonan in particular has leapt at the chance to document the real-world performance of Waymo’s driverless taxis. Joel Johnson is an Arizona State University student who is taking a break from college during the pandemic. He lives near Waymo’s service territory and has been using some of his free time to put Waymo’s driverless taxis through their paces. He says he has taken more than 60 driverless rides in the two months since Waymo opened driverless service up to the public. He has posted more than a dozen videos.

Meanwhile, Musk backtracks hysterically on “full self driving” which just went into Beta 9 (which totally flopped per a gazillion videos posted over the last week), so he how tells us to stay tuned for Beta 10 and eventually Beta 11 which will start pulling it all together: https://twitter.com/elonmusk/status/1415782123298902019

FSD beta 9 is using the pure vision production code for highway driving. Beta 10 hopefully (Beta 11 definitely) will use one stack to rule them all – city streets, highway & complex parking lots.

Thought you’d find these maps interesting… Tesla SuperChargers versus High Speed DC Chargers for other brands. As we’ve discussed, the Tesla SuperCharger network (which based on what I see on my Tesla screen is growing at an extremely rapid pace) and the way Tesla integrates the charging network into their navigation system along with real time status updates (i.e. how many stalls at each site and how many are available) is their big advantage as competition heats up in the EV market. I just spent some time navigating (trying to navigate) the non-Tesla EV charger maps … almost a non-starter. I’m sure they will get their act together but so far it’s almost shameful. On a positive note, I did see some 100kw chargers from EV-GO …

Here are the North American Tesla Superchargers as of June 2021. There 4 to 56 chargers at each dot. The largest sites are along the more heavily travelled routes. 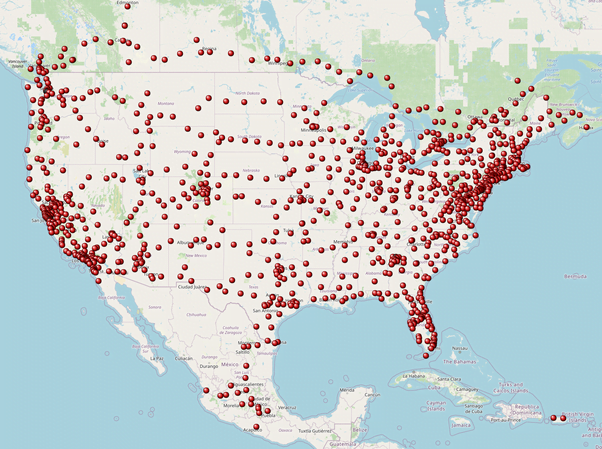 And here are the high speed DC chargers for every other brand of EV. Not quite as comprehensive as the Tesla network, and on average each site has fewer chargers, but new stations are being built every day. 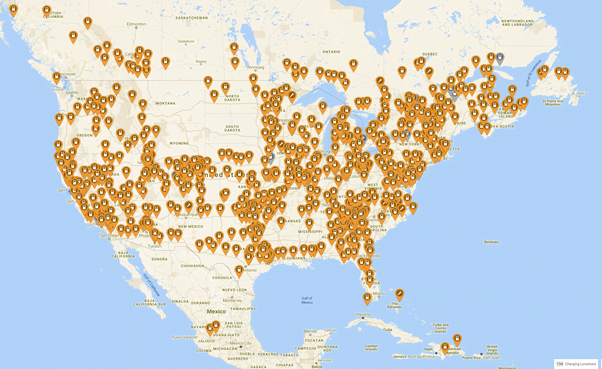 I think his statement is fair.  For long-distance travel, I think Tesla’s overall software integration and features make such long-distance trips less un-viable than it does for other BEVs.  Tesla remains the #1 for long-distance BEV drives across the North American continent.

It is also true that the non-Tesla networks are closing this advantage at a rapid pace — less so with software (although that will also happen one day, maybe in a year or two), but rather with brute hardware force.  Basically, so many stations are being built that it partially compensates for the lesser software.  Eventually, that gap will amount to just about zero in practice.

The matter is also somewhat individual in that a particular route — not necessarily those vaunted cross-continent trips — is well-known to the traveler, and that this person has figured out where the best places to charge are.  For example, if someone is driving from Miami to Orlando or from Atlanta to New Orleans or whatever, on a regular basis, this person may be familiar in advance with one or two favorite places to stop, plus a couple of suitable backup locations.  If so, the fact that one network is “generally” better than the other one, may not matter.

Of course, neither system beats the simple, fast and reliable regular fueling system: Just keep driving your regular gasoline or diesel vehicle in any unplanned direction until the light blinks yellow.  Then pull over at some point within the next 50-100 miles and fill up in 3 minutes.  Continue to drive another 400 miles.  Rinse and repeat.  No thinking, planning or worrying required.

I wonder, how is the transition to BEVs going in Africa, India, the Middle East and South America?  What cars will they buy if automakers go “all EV” by 2030 or 2035?

Electrify America operates the largest, best and most consistent network of 150 kW DC chargers that is open to all EVs, all brands. Here is the map: https://www.electrifyamerica.com/locate-charger/

Keep in mind that this is the U.S. number, but the Tesla number includes both Canada and Mexico.

I should mention one important point in Tesla’s favor: Reliability.  Yes, unlike the cars themselves, where Tesla’s quality and reliability is clearly the worst of anything on four wheels, the Supercharger stations are simply more reliable than the competition.  Other cars tend to have more problems when pulling up to those chargers.

And that’s a big issue.  If people had the same lack of reliability with gasoline stations, as they have at many of the (non-Tesla) DC charging stations, especially those 100-150 miles spaced out locations among the interstate freeways, they would be up in arms.  You could be stranded in the middle of nowhere.  In the EV world, reliability of the vehicle itself is only half the equation on one of those long-distance roadtrips.

So kudos to Tesla for having a higher degree of reliable Superchargers, than the competition.  I have no idea if or when the competition will fully close that gap, but it’s an even more important gap than just the number of locations, which is rapidly becoming a competitive non-issue vis-a-vis Tesla.

The $20 Billion Winner of the American EV Startup Boom

The single biggest financial beneficiary of the recent U.S. electric-vehicle startup boom is an unlikely candidate: the world’s largest exporter of oil.

The kingdom of Saudi Arabia stands to record a profit of nearly $20 billion on a $2.9 billion investment in Lucid Motors Inc., a San Francisco Bay Area electric-car maker that is set to list publicly after it completes a merger with a special-purpose acquisition company Friday. The Saudi Public Investment Fund will own over 60% of the company, which is expected to have a market capitalization of about $36 billion based on the SPAC’s current share price.