The Pound Sterling has had a fantastic end to 2021 and has started 2022 in much the same way. Many have been eying the Sterling as the target currency in a potential ‘carry trade’ as the Bank of England (BoE) decided to raise the interest rate in December last year. The idea behind the carry trade is to short a low yielding currency and long a higher yielding currency e.g. Long GBP/JPY – which so happens to be one of our top trades of Q1. Click on the banner below for all of our analyst picks for Q1 2022.

While the gap between GBP long and short positions have converged somewhat, the more dominant force has been a reduction in shorts rather than the adoption on long GBP positions according to the latest commitment of traders (CoT) data from the CFTC. This would seem to represent profit taking form earlier short GBP positions with little adoption of a bullish bias in Sterling as long positions remain rather flat.

However, the significant net-short positioning may act as a tailwind for GBP bulls if the value of Sterling continues to rise. This is due to the fact that short GBP traders will have to buy it back to unwind the position, thus driving up the value of the Pound further.

New commitments of traders data, recorded up until Tuesday, will be made available on Friday afternoon (in the US) with updated positioning. 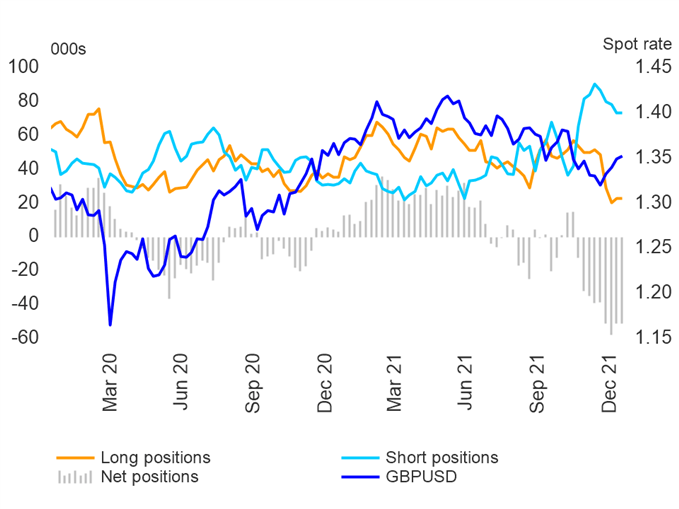 The bullish sentiment for GBP/USD originates from the impressive run from late December when the BoE raised the interest rate from 0.1% to 0.25% at a time when the effects of the Omicron situation on the global economy was still fairly uncertain. I believe markets viewed this as a sign that the central bank is committed to normalizing monetary policy as we look ahead to number of expected rate hikes for 2022. A greater level of conviction behind the rate hiking cycle is likely to buoy Sterling in the absence of any new Covid variants.

On a shorter term note, the disappointing NFP miss on Friday is likely to support GBP/USD prices for the time being. 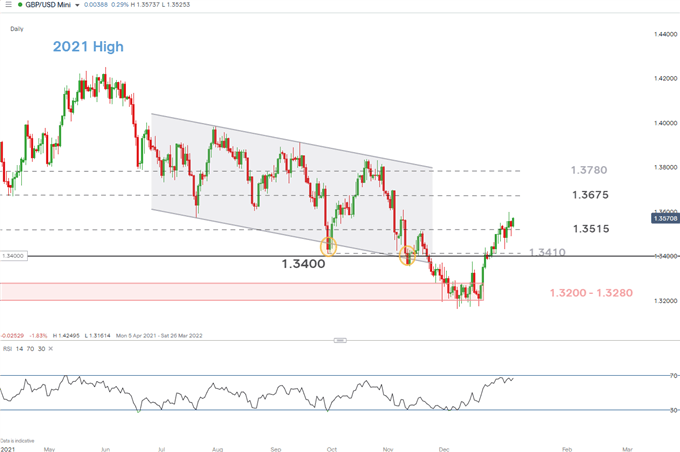 This is a pair that I have watched with increasing interest ever since the BoE rate hike, mainly for its potential in a carry trade setup. With expectations of further UK rate hikes and the continuation of the negative interest rate regime in Japan, keep an eye on UK-JPY treasury yield spreads. A widening spread may lift the attractiveness of Sterling and when paired against the negative yielding Yen, becomes rather attractive from a carry trade perspective.

Typically after a parabolic rise, pullbacks tend to be rather shallow and short-lived, much like what have witnessed in GBP/JPY recently. However, the pair currently trades in overbought territory according to the RSI which may suggest the pair is due for a period of consolidation or deeper pullback. Those looking for bullish continuation plays may welcome lower prices as they present better entry levels when the bull trend advances once more. Nevertheless, the outlook remains bullish for this pair over the quarter and possibly for large parts of 2022. 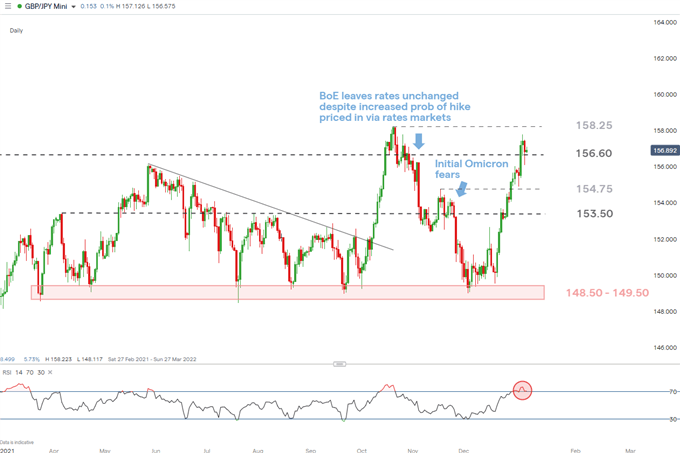 Risk Events for the Week Ahead

The week ahead looks rather quiet from a data perspective and we just have the November GBP data that is of high priority.

— Written by Richard Snow for DailyFX.com