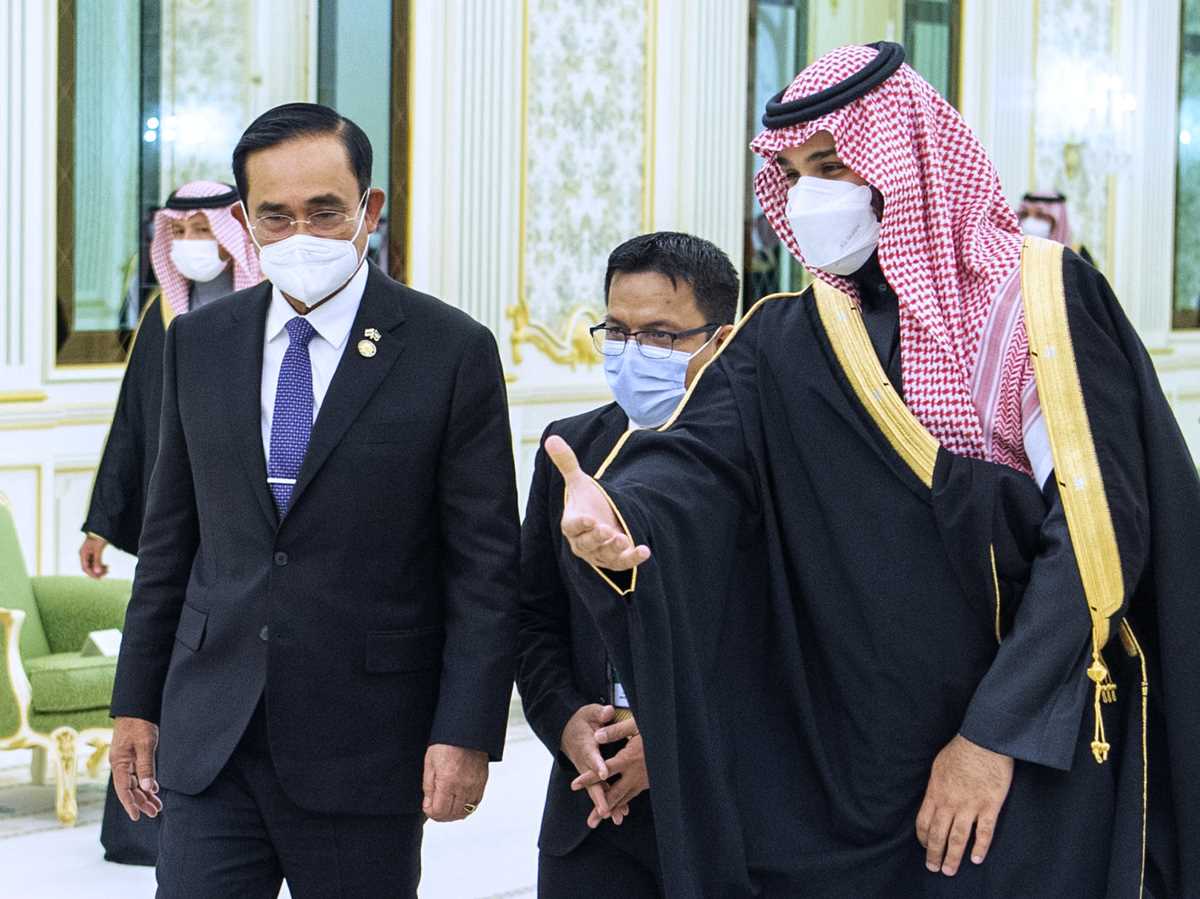 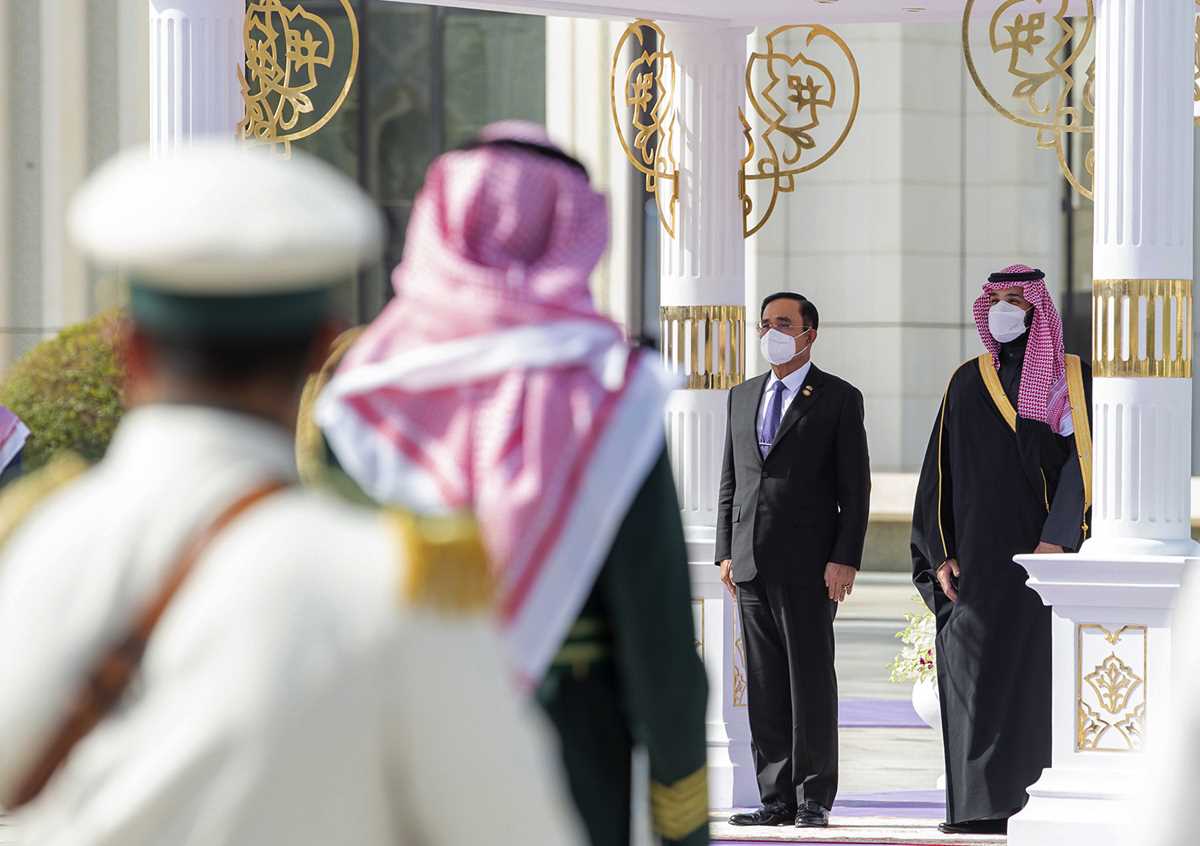 In this photo released by the Saudi Royal Palace, Saudi Crown Prince Mohammed bin Salman, right, and Thai Prime Minister Prayuth Chan-ocha, greet an honor guard at the royal palace in Riyadh, Saudi Arabia, Tuesday, Jan. 25, 2022. Thailand’s prime minister arrived in Saudi Arabia on Tuesday for the first high-level meeting since relations between the nations soured three decades ago over a sensational jewelry heist that led to a diplomatic row and string of mysterious killings. (Bandar Aljaloud/Saudi Royal Palace via AP) 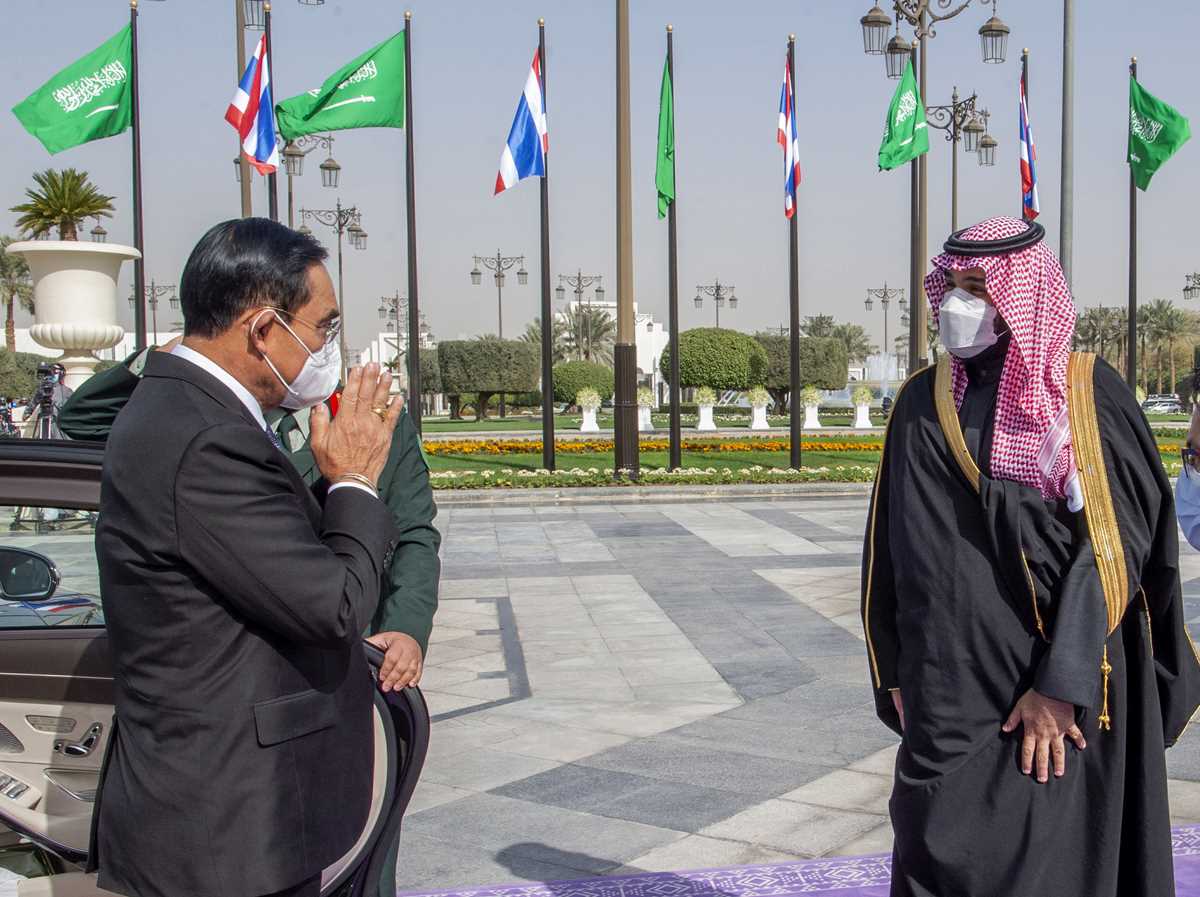 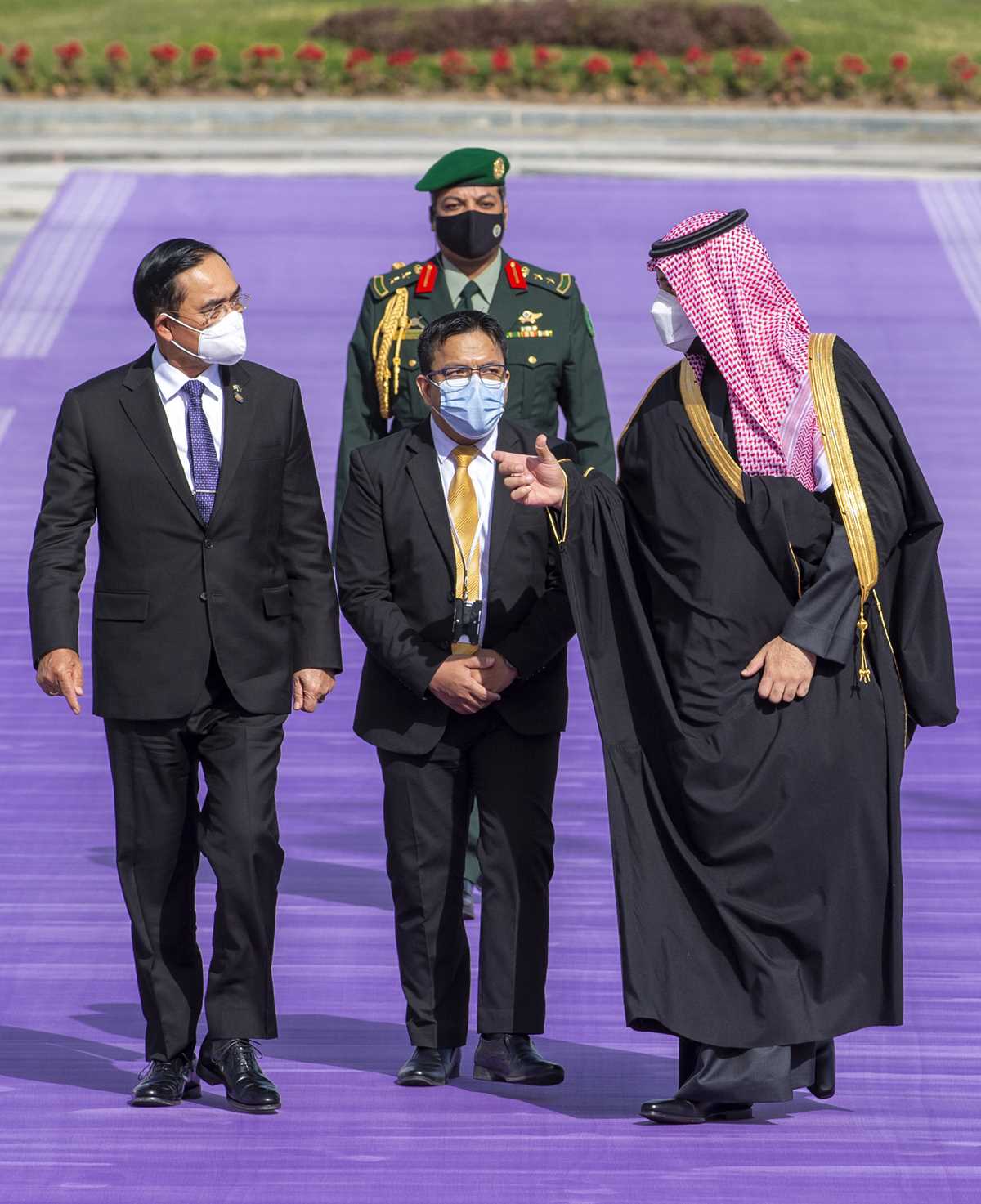 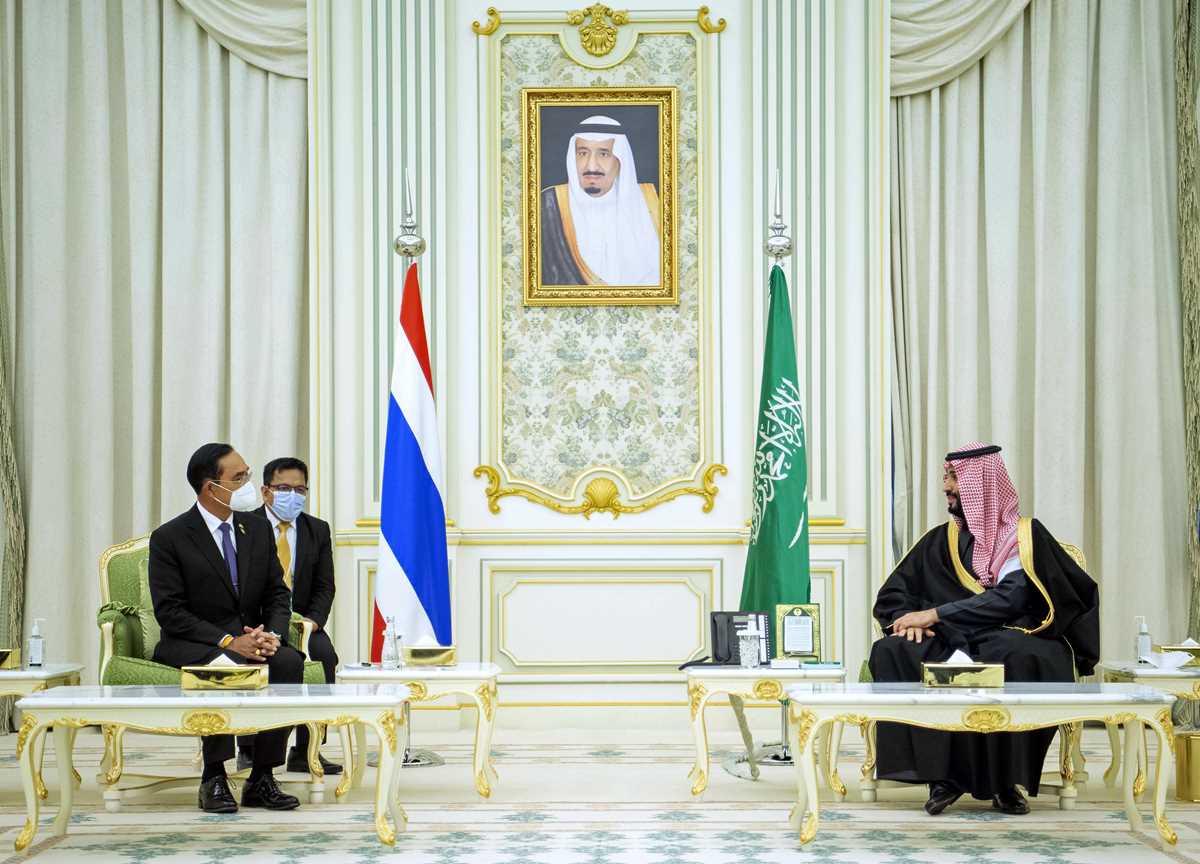 In this photo released by the Saudi Royal Palace, Saudi Crown Prince Mohammed bin Salman, right, meets with Thai Prime Minister Prayuth Chan-ocha, at the Royal Palace in Riyadh, Saudi Arabia, Tuesday, Jan. 25, 2022. Thailand’s prime minister arrived in Saudi Arabia on Tuesday for the first high-level meeting since relations between the nations soured three decades ago over a sensational jewelry heist that led to a diplomatic row and string of mysterious killings. At top is an image of Saudi King Salman. (Bandar Aljaloud/Saudi Royal Palace via AP) 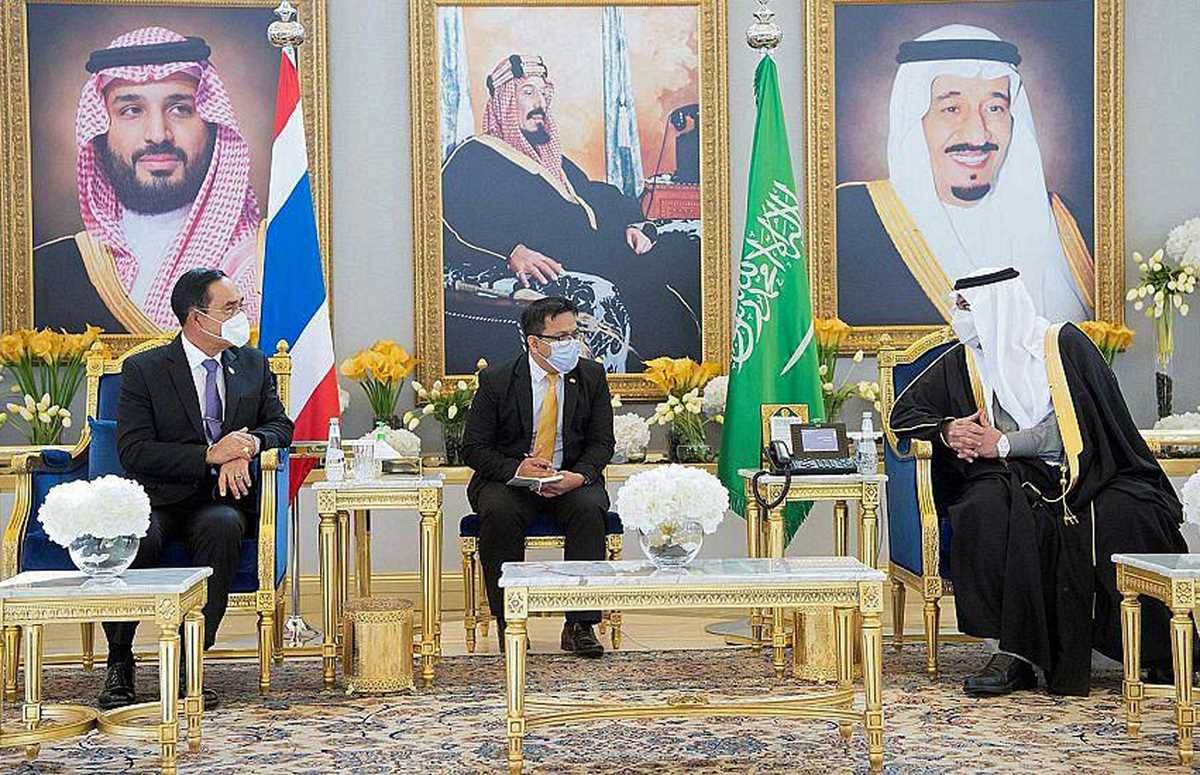 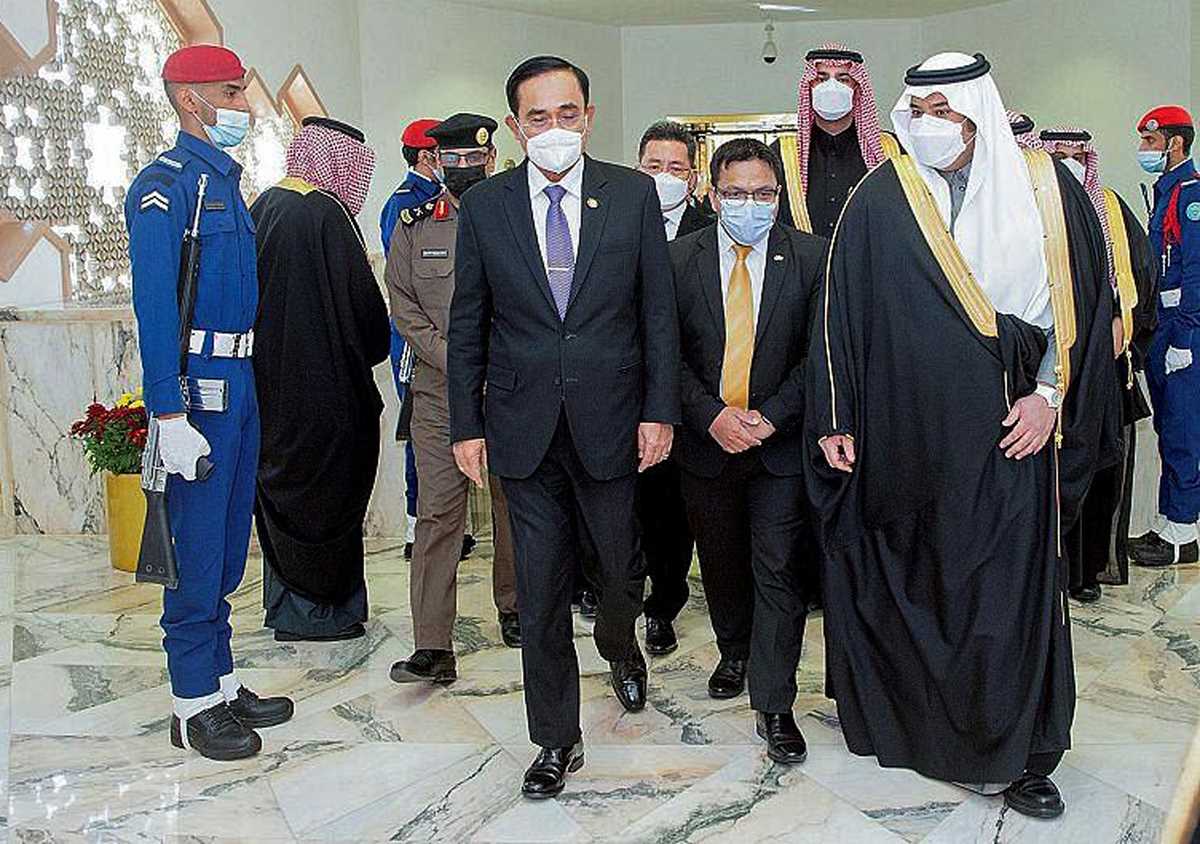 DUBAI, United Arab Emirates (AP) — Saudi Arabia on Tuesday ordered the restoration of full diplomatic ties with Thailand and said the countries agreed to trade ambassadors, closing the chapter on three decades of mistrust and hostility between the nations that stemmed from a sensational jewelry heist.

The rapprochement came during Thai Prime Minister Prayuth Chan-ocha’s official visit to the kingdom, which marked the highest-level meeting between the countries since relations soured over the 1989 political scandal. Saudi Arabia downgraded its diplomatic relations with Thailand over the theft that led to a string of mysterious killings and became known as the Blue Diamond affair.

The countries will explore joint investment in fields ranging from energy and petrochemicals to tourism and hospitality, the statement added. Tourism is a key element of Vision 2030, Saudi Arabia’s economic reform plan meant to wean the kingdom off oil.

Saudi Arabian Airlines, meanwhile, said it would start direct flights from Riyadh to Bangkok in May, promoting Thailand in a Twitter post as “the land of culture.”

Prince Mohammed has ventured into diplomatic territory where previously the government refused to go. In 1989, priceless 50-carat blue diamond was among an estimated $20 million worth of gems and jewelry pilfered by a Thai janitor from a Saudi prince’s palace in the heist that wrecked relations between the countries. The kingdom stopped issuing and renewing visas for hundreds of thousands of Thai workers, suspended permits for thousands of Thai Muslims hoping to make the annual hajj pilgrimage to Mecca and warned its citizens not to travel to Thailand.

Three Saudi diplomats seeking the valuables’ return were shot dead in Bangkok. A Bangkok-based Saudi businessman believed to have been hunting for the missing jewels also disappeared, and was presumed killed. No one was convicted for the killings.

The Thai government on Tuesday expressed “regret over the tragic incidents that occurred to Saudi citizens in Thailand between 1989 and 1990″ and stressed “its keenness to resolve issues related to these events,” the joint statement said.

The Thai police claimed to have solved the case, but many of the jewels they sent back to Riyadh were fake. Thai media crackled with reports that the wives of top officials had been spotted wearing diamond necklaces that bore an uncanny resemblance to the stolen jewels. The fabled blue diamond was never recovered.

Thailand promised that it would raise cases with competent authorities if any “new and relevant evidence” related to the killings emerged, SPA added.

The saga exposed the graft and abuse of power that runs rampant in Thailand’s police forces as speculation mounted that senior officers and members of the elite had kept the stones and ordered a cover-up.

Thailand, deprived by the dispute of billions of dollars in badly needed tourism revenues and workers’ remittances, long has wanted to patch up relations with oil-rich Saudi Arabia.

Saudi Arabia, in a push to modernize and diversify its oil-dependent economy, is trying to draw foreign tourists and investors and overhaul its reputation as one of the world’s most closed countries with a bleak human rights record.

7 Growth Stocks to Buy as the Market Slumps

At times of volatility, it can be hard for even experienced investors to stay the course. Yet over time, stocks have consistently increased in value. And growth stocks tend to be among the ones that show the largest gains. Growth stocks are companies that analysts believe will grow at a rate that is significantly above the market average.

These stocks are also characterized by companies that invest a significant portion of its profits back into its business in order to accelerate growth. This is opposed to value stocks that make returning a portion of its profits to shareholders a priority. This typically occurs in the form of a dividend.
One misconception of growth stocks is that they have a high correlation with the market. It’s true that when the market is moving higher, these stocks tend to outperform. However, when the market is moving lower, these stocks sometimes perform better.

So why should you consider buying growth stocks now? The reason is this. In many cases, the company’s underlying fundamentals are still positive, but the sentiment has changed. And that means it’s a good time to buy these stocks on sale.

View the “7 Growth Stocks to Buy as the Market Slumps”.