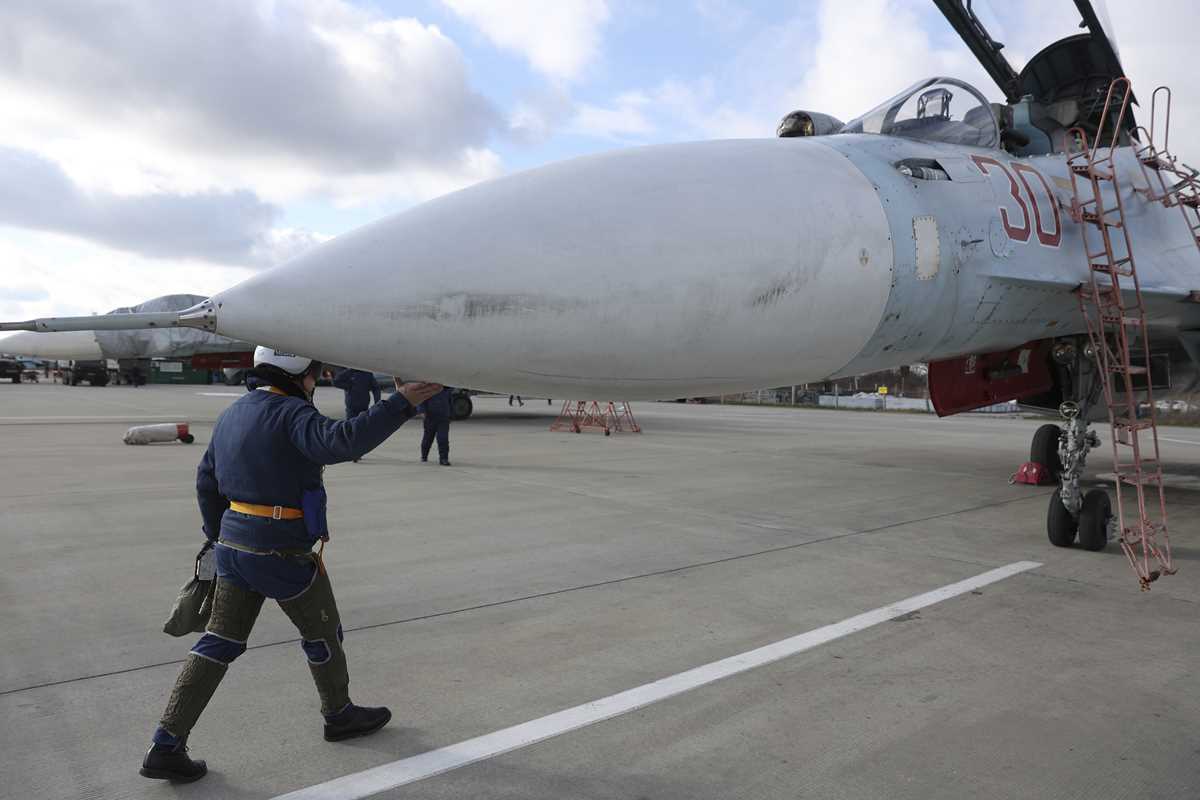 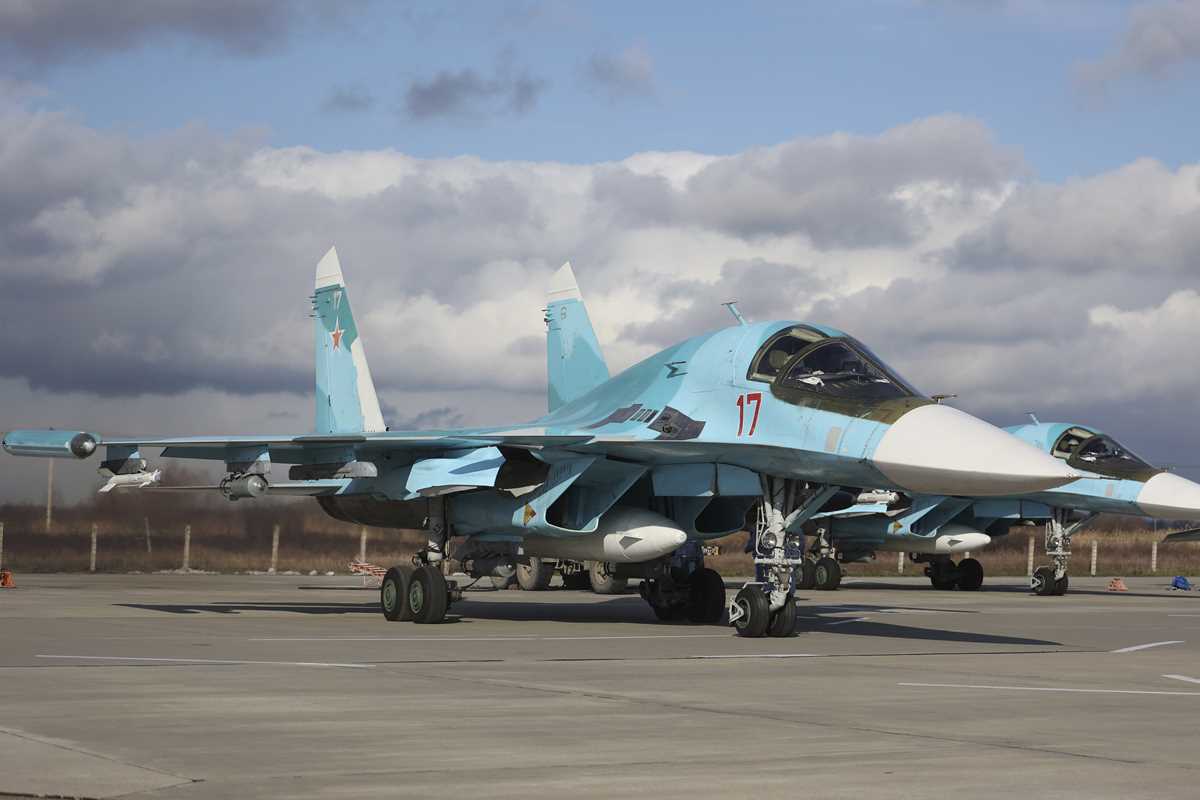 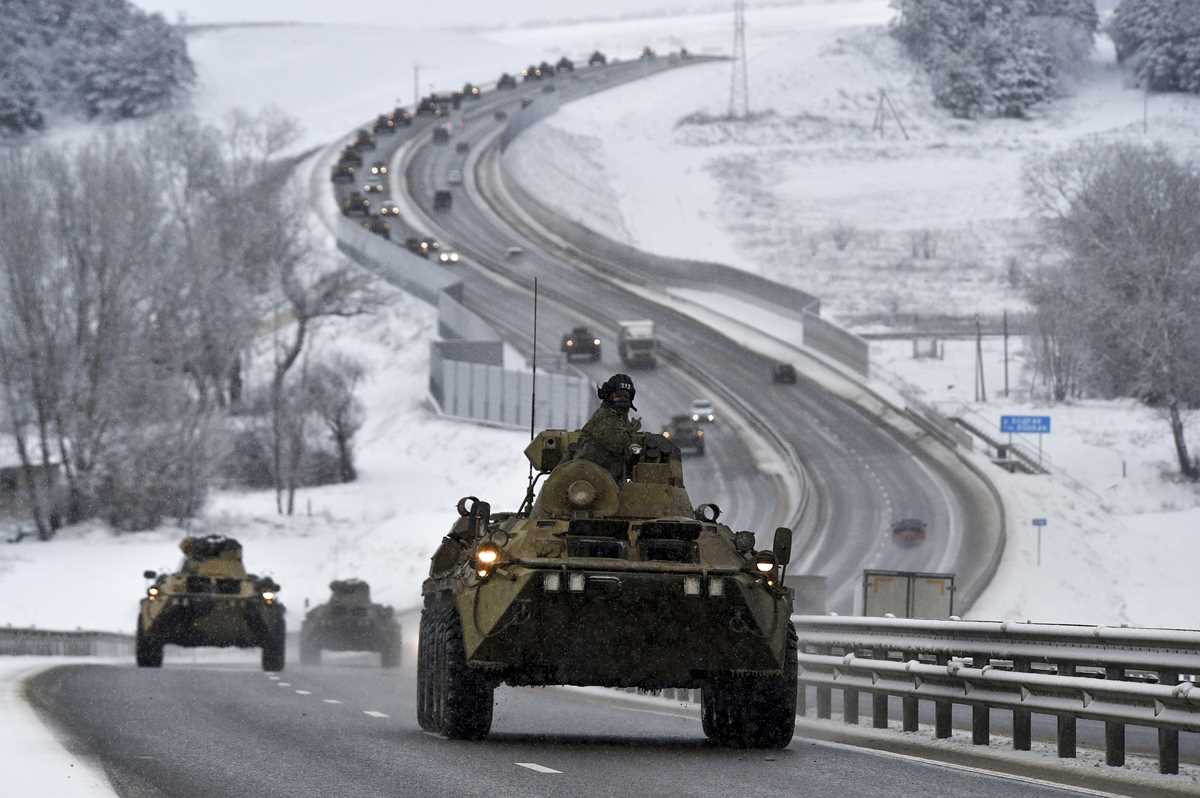 A convoy of Russian armored vehicles moves along a highway in Crimea, Tuesday, Jan. 18, 2022. Russia has concentrated an estimated 100,000 troops with tanks and other heavy weapons near Ukraine in what the West fears could be a prelude to an invasion. The Biden administration is unlikely to answer a further Russian invasion of Ukraine by sending U.S. combat troops. But it could pursue a range of less dramatic yet still risky options, including giving military support to a post-invasion Ukrainian resistance. (AP Photo) 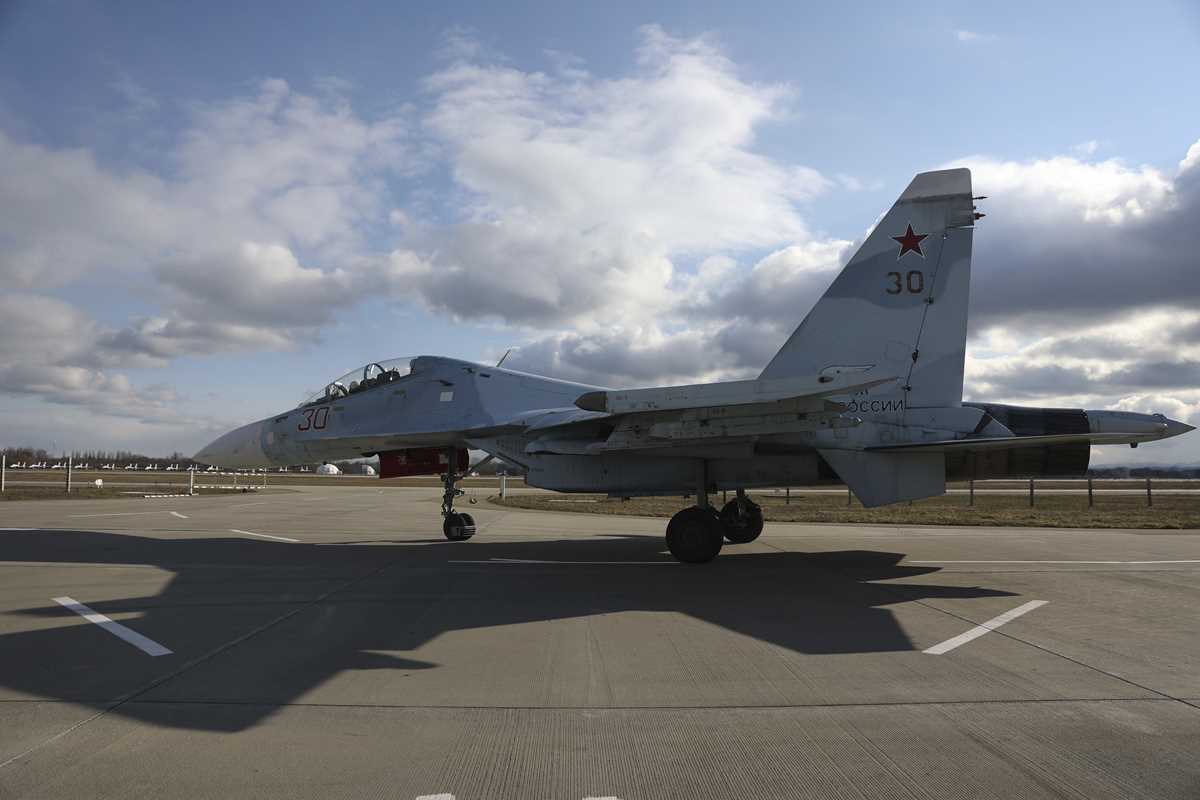 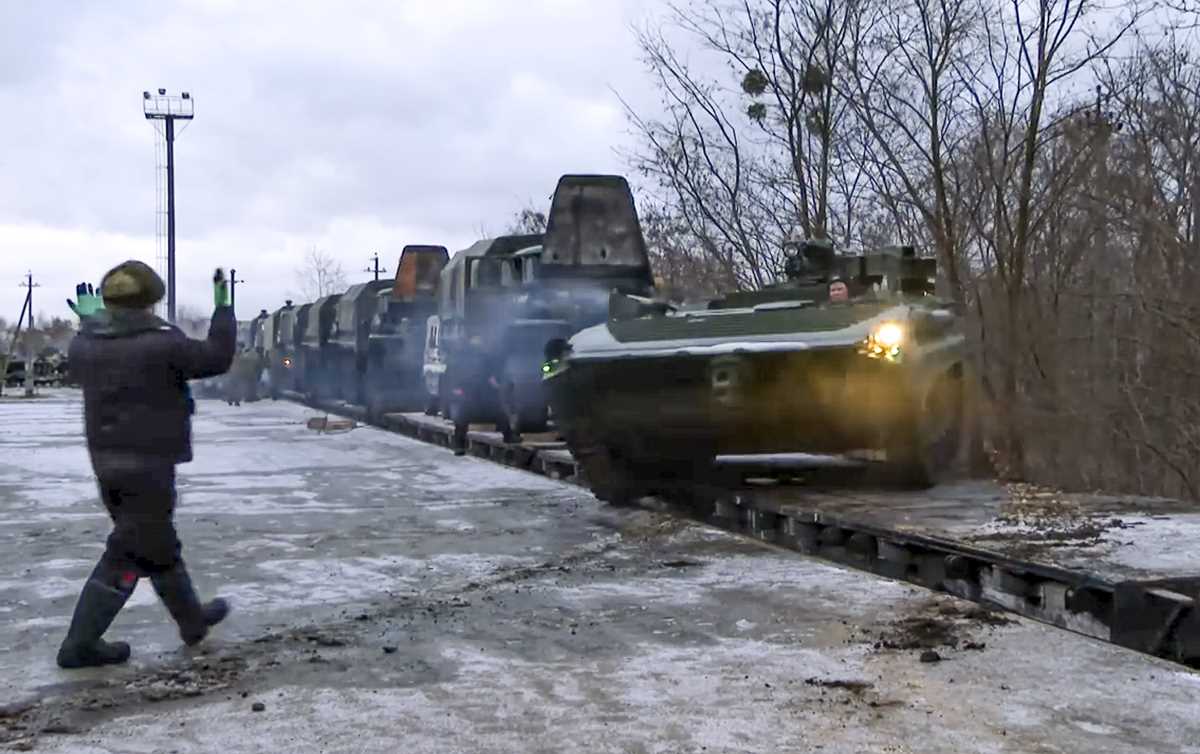 In this photo taken from video provided by the Russian Defense Ministry Press Service, A Russian armored vehicle drives off a railway platform after arrival in Belarus, Wednesday, Jan. 19, 2022. In a move that further beefs up forces near Ukraine, Russia has sent an unspecified number of troops from the country’s far east to its ally Belarus, which shares a border with Ukraine, for major war games next month. The Biden administration is unlikely to answer a further Russian invasion of Ukraine by sending U.S. combat troops. But it could pursue a range of less dramatic yet still risky options, including giving military support to a post-invasion Ukrainian resistance. (Russian Defense Ministry Press Service via AP) 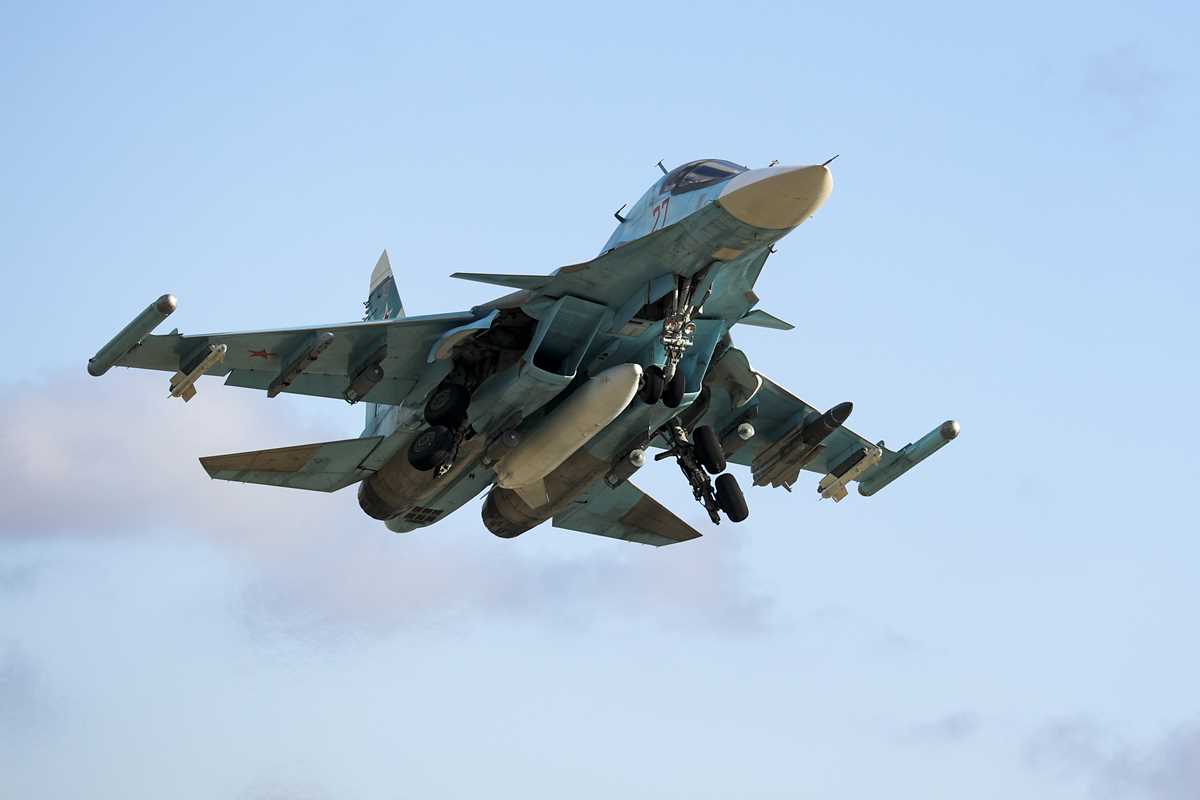 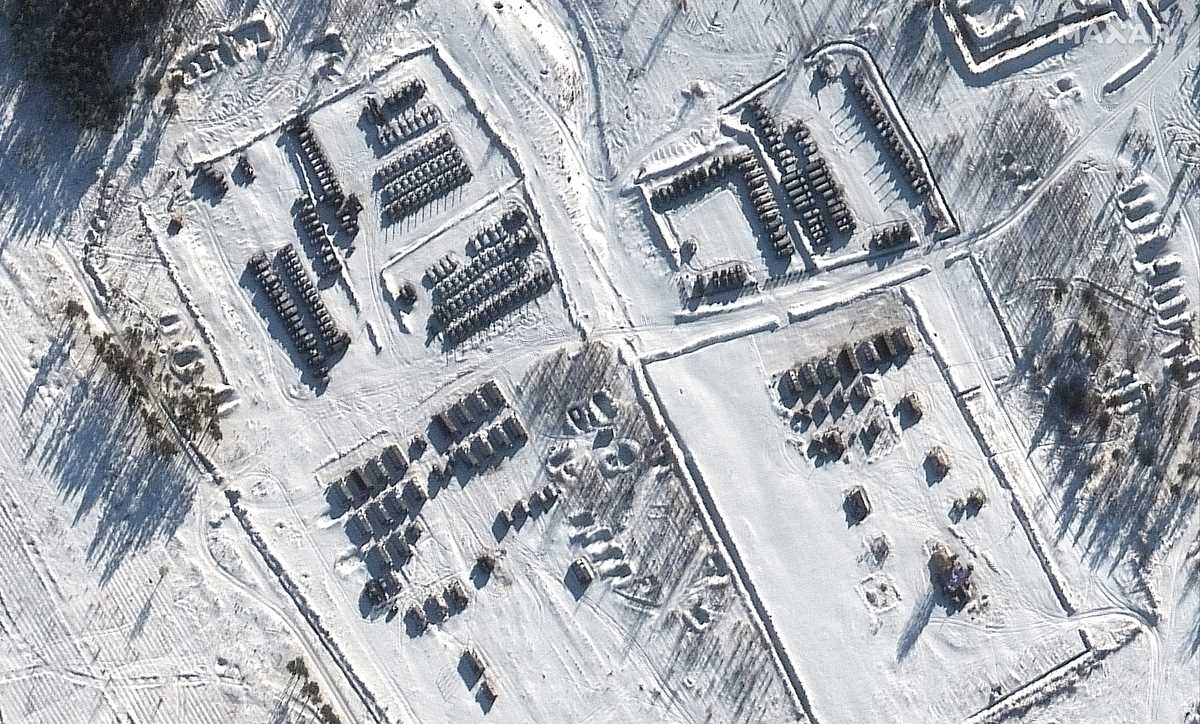 This satellite image provided by Maxar Technologies shows battle group deployments at the Pogonovo training area in Voronezh, Russia, Sunday, Jan. 16, 2022. President Joe Biden said Wednesday, Jan. 19, he thinks Russia will invade Ukraine and warned President Vladimir Putin that his country would pay a “dear price” in lives lost and a possible cutoff from the global banking system if it does. (Maxar Technologies via AP) 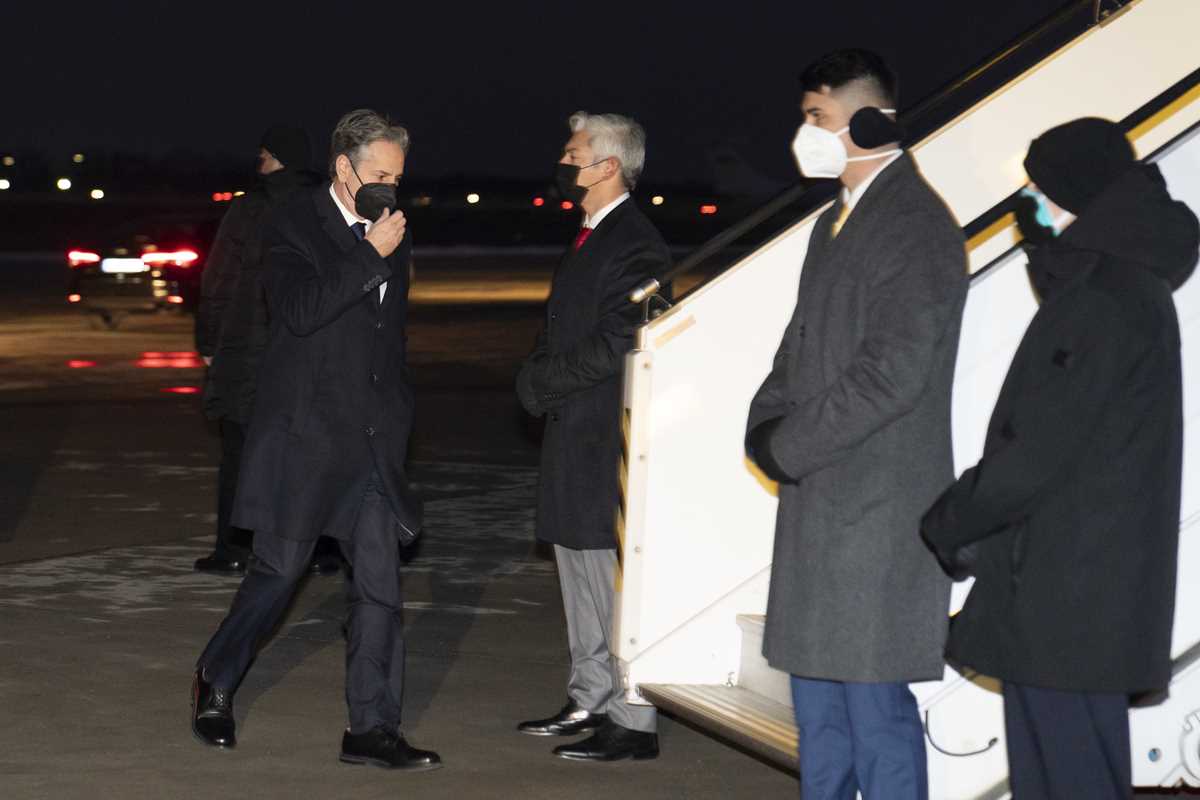 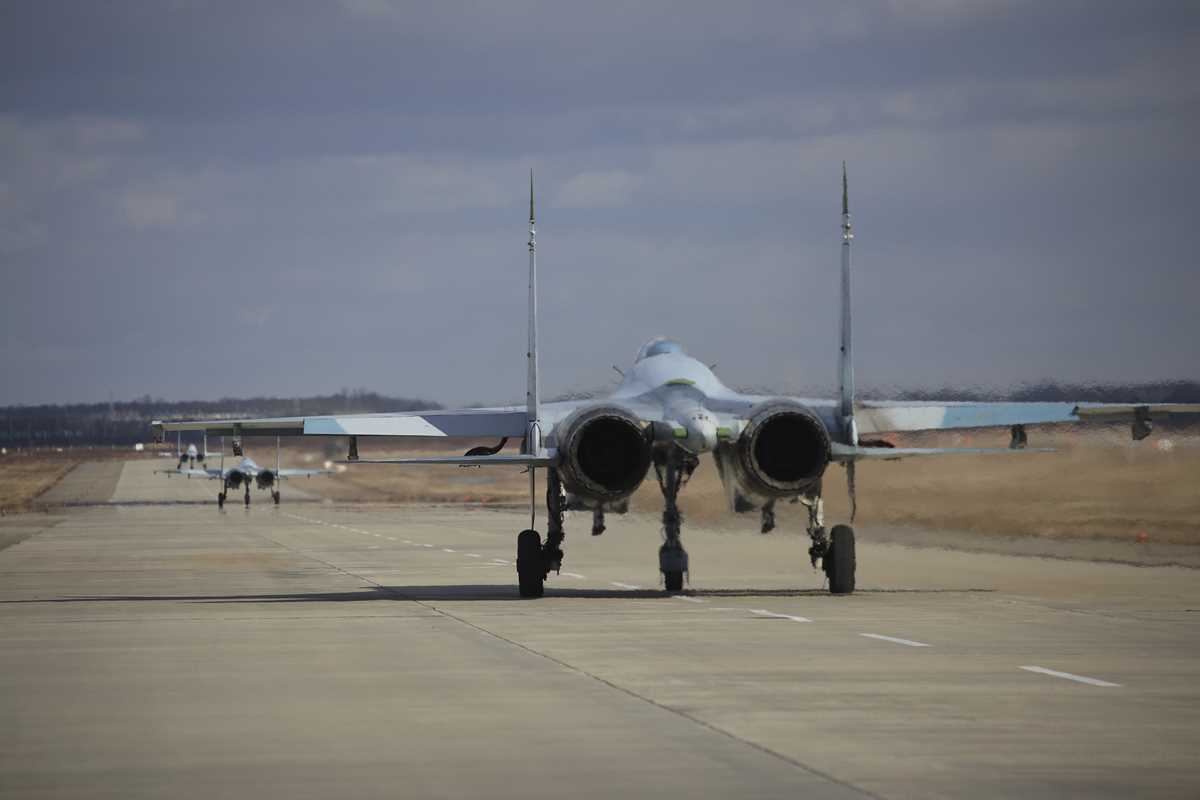 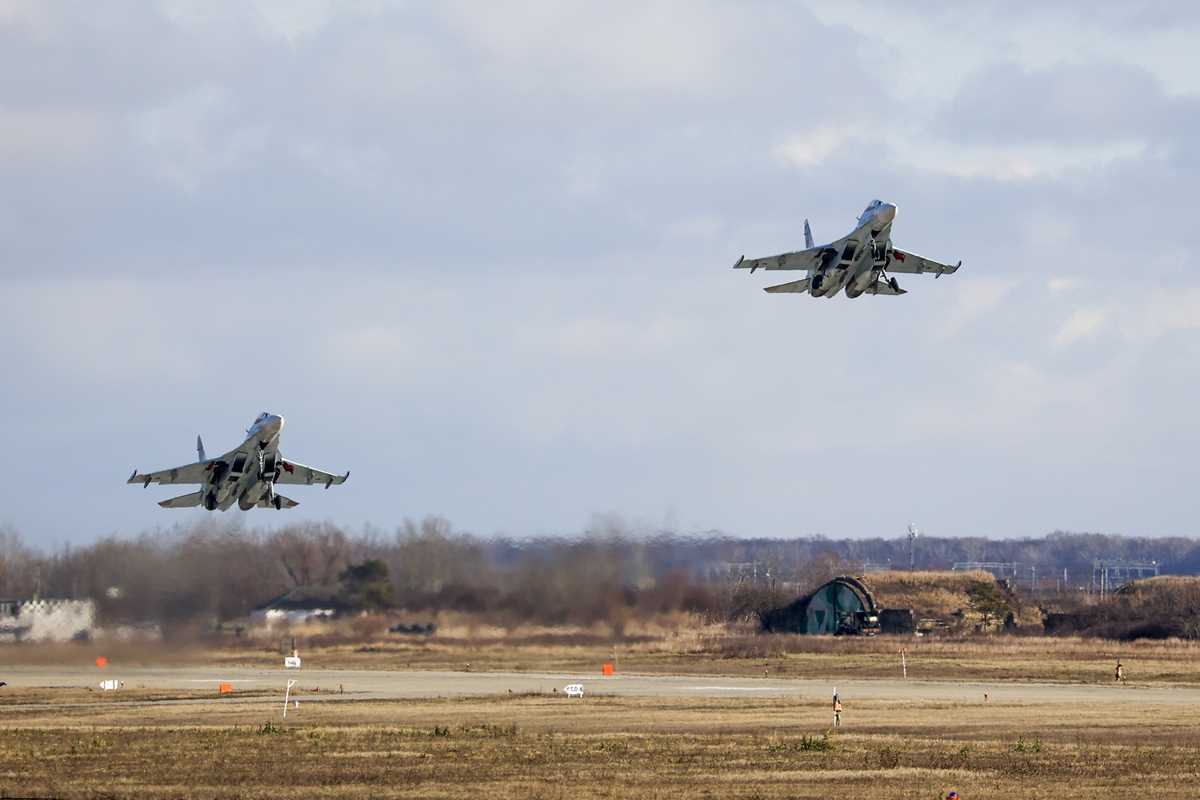 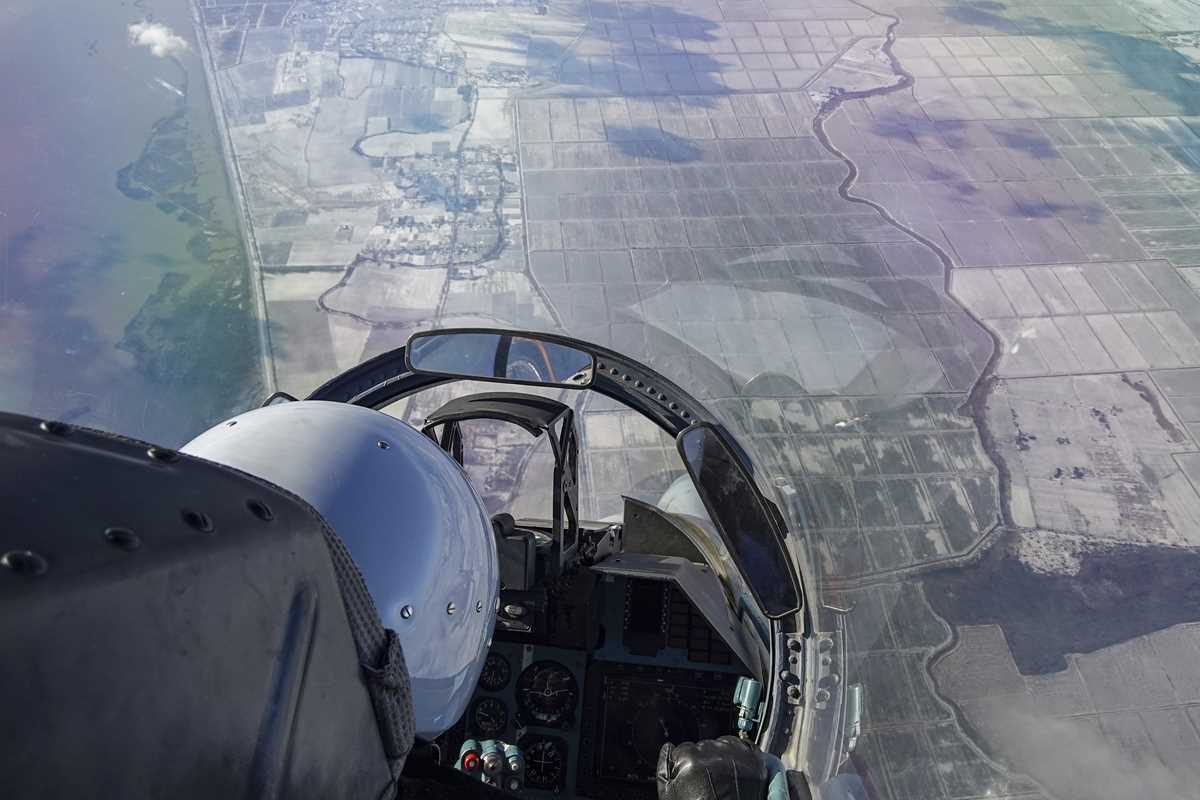 A view from the cockpit of a Russian Su-30 fighter jet as it takes part in a training mission in Krasnodar Region, Russia, Wednesday, Jan. 19, 2022. (AP Photo/Vitaliy Timkiv) 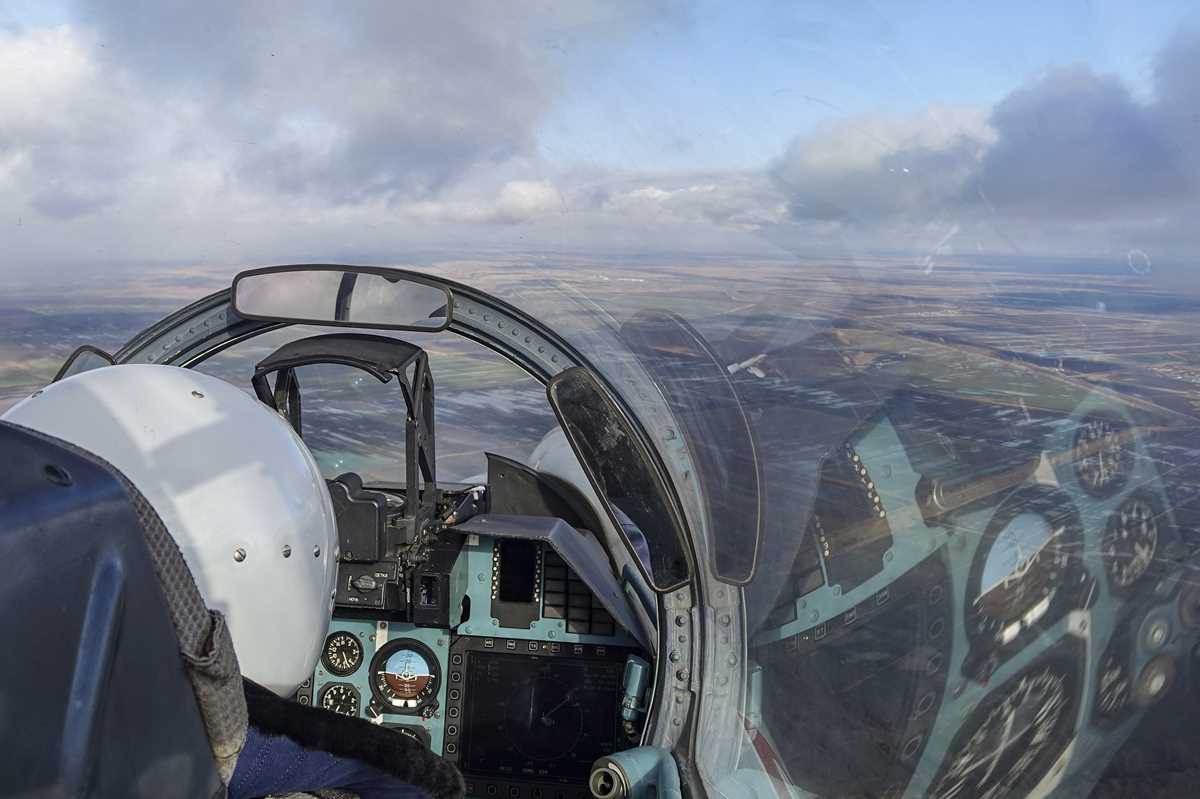 A view from the cockpit of a Russian Su-30 fighter jet as it takes part in a training mission in Krasnodar Region, Russia, Wednesday, Jan. 19, 2022. (AP Photo/Vitaliy Timkiv)

MOSCOW (AP) — Russia on Thursday announced sweeping naval drills in several parts of the world this month, and claimed the West is plotting “provocations” in neighboring Ukraine where the Kremlin has been accused of planning aggressive military action.

Amid a buildup of an estimated 100,000 Russian troops near the border with Ukraine and massive joint war games with Belarus, the Defense Ministry said it will also conduct maneuvers involving the bulk of Russia’s naval potential.

“The drills are intended to practice navy and air force action to protect Russian national interests in the world’s oceans and to counter military threats to the Russian Federation,” the ministry said, adding that they will start this month and run through February.

It said the exercise will involve over 140 warships and more than 60 aircraft, and will be conducted in both littoral waters and more distant “operationally important” areas including the Mediterranean, northeastern Atlantic and the Pacific Ocean.

The ministry said several Russian warships are currently taking part in a joint exercise with China and Iran in the Gulf of Oman that began Tuesday and will last until the weekend.

U.S. President Joe Biden said Wednesday he thinks Russia will invade Ukraine and warned President Vladimir Putin that his country would pay a “dear price” in lives lost and a possible cutoff from the global banking system if it does.

Moscow has repeatedly denied having plans to launch an offensive. But it has sought a set of security guarantees from the West that would exclude NATO’s expansion to Ukraine and other ex-Soviet nations and the deployment of alliance weapons there.

Washington and its allies firmly rejected Moscow’s demands in security talks last week but kept the door open to possible further talks on arms control and confidence-building measures to reduce the potential for hostilities.

Amid the tensions, U.S. Secretary of State Antony Blinken visited Ukraine Wednesday to reassure it of Western support and met with his British, French and German counterparts in Berlin on Thursday to discuss Ukraine and other security matters. Blinken is set to meet Russian Foreign Minister Sergey Lavrov in Geneva on Friday.

Russian Foreign Ministry spokeswoman Maria Zakharova alleged that Ukrainian and Western claims of an imminent Russian attack on Ukraine were a “cover for staging large-scale provocations of their own, including those of military character.”

“They may have extremely tragic consequences for the regional and global security,” Zakharova said.

She pointed to the delivery of weapons to Ukraine by British military transport planes in recent days, claiming that Ukraine perceives Western military assistance as a “carte blanche for a military operation in Donbas.”

Donbas, located in eastern Ukraine, is under control of Russia-backed separatists who have fought Ukrainian forces for nearly eight years, a conflict that has killed more than 14,000 people.

Ukraine said earlier this week that it has taken the delivery of anti-tank missiles from the U.K. It has rejected Moscow’s claims that it plans an offensive to reclaim control of separatist-held areas in the country’s eastern industrial heartland.

Kremlin spokesman Dmitry Peskov said the U.S. threat to cut off Russia from the global banking system could encourage hawkish forces in Ukraine to use force to reclaim control of the rebel east.

“It may implant false hopes in the hotheads of some representatives of the Ukrainian leadership who may decide to quietly restart a civil war in their country,” Peskov said in a conference call with reporters.

In a move that further beefs up forces near Ukraine, Russia has sent an unspecified number of troops from its far east to its ally Belarus, which shares a border with Ukraine, for major war games that run through Feb. 20. Ukrainian officials have said Moscow could use Belarusian territory to launch a potential multi-pronged invasion.

The head of the European Union’s executive arm, European Commission President Ursula von der Leyen reiterated Thursday that the EU “will respond with massive economic and financial sanctions” if Russia invades Ukraine. “We hope an attack won’t happen, but if it does, we are prepared,” von der Leyen said during an online speech to the Davos business forum.

Vanessa Gera in Warsaw, Poland, and Lorne Cook in Brussels, contributed to this report.