You wouldn’t know it from reading TFF Pharmaceuticals’ (NASDAQ: TFFP) recent press releases, but buried in the most recent biopharmaceutical company’s investor presentation (slide 29 of 32) released on December 21st, 2021, TFFP says it is collaborating with Pfizer (NYSE: PFE) to evaluate the feasibility of its proprietary thin film freezing technology on multiple drug candidates.

The jury is still out whether TFFP’s collaboration with Pfizer will bear any fruit, but investors are reevaluating the stock’s potential after several weeks of trading near 52-week lows and a management team that seems primed to deliver.

We asked our community whether it’s the right time to take a closer look at TFFP, and guest contributor, Dan Carlson, from TW Research, provided StoryTrading with a VIP Pick update through the lens of our four pillars: Catalysts, Sentiment, Technicals, and Fundamentals.

Even though TFFP is coming off an extended stretch of agony for its shareholders, the company’s technology may be poised to address a large market. Roughly 60% of all pharmaceutical products are non-water soluble. This means that they need to be administered either through injection or orally. However, due to lower absorption rates, this is frequently not the ideal delivery methodology for these drugs.

In doing so, TFFP increases the water solubility of drugs and enables direct dosing to the lungs, thereby increasing the absorption of many medications. This allows for lowering doses and fewer side effects, which would enable more drugs to come to market at lower costs.

Thin film freezing can improve the effectiveness of many therapeutics. Some drugs are limited by safety issues associated with the optimally therapeutic dose. Additionally, many drugs poorly penetrate the deep lung (alveoli). With thin film freezing, drugs can be manufactured in “brittle matrix particles” with an extremely high specific surface allowing them to supersaturate immediately upon contact with the target site, such as the alveoli. This way, drugs manufactured with TFFP’s process could be able to treat respiratory conditions more safely and effectively.

Thin film freezing is also applicable to drugs targeting distant organs or drugs that need systemic administration. Additionally, the technology could be used to create new chemical compositions in patents, thereby improving existing drugs and extending the runway of these drugs for potential pharma partners. There is a lot of potential for TFFP to partner with companies that may be interested in utilizing its technology to develop drugs that are otherwise unviable.

Therefore, the market opportunity for thin film freezing is vast.

So why consider investing now in TFFP?

There are several catalytic forces coming together for TFFP that could create the excitement needed to send its shares on an extended run.

TFFP’s internal programs are all proceeding very smoothly, despite the common Covid-related delays seen by most clinical-stage healthcare companies. Upcoming near-term catalysts may include:

While none of these events is necessarily game-changing for TFFP, “stacked catalysts”  can help fuel momentum in stock performance.

The other force that is palpable for TFFP is the potential announcement of at least one significant partnership with a major pharmaceutical company. Partnering with one of the top pharmas has been a goal of management and an event that has been disappointingly slow to materialize for TFFP investors.

Joint collaborations on a new compound’s development is an essential step before a partnership comes to fruition. TFFP has entered into Material Transfer Agreements with over half of the top 20 pharma companies globally. In several of these arrangements, they are working on demonstrating thin film freezing’s efficacy across multiple product lines.

These collaborations appear to be coming to a successful conclusion. On multiple earnings calls, CEO Glenn Mattes has discussed the “terms sheets on his desk” and predicted closing deals before year-end. He missed that timeline, but his optimism is unchanged.

Even more telling, in the last several weeks, TFFP has updated the company’s investor presentation to include Pfizer by name as a collaboration partner. This could be a significant development as Pfizer would not allow TFFP to use its name unless a relationship had progressed to the point where they feel comfortable that it’s going to work out. That doesn’t mean TFFP is ready to issue a press release on the collaboration, but it may be close.

Sentiment for TFFP, which is how StoryTrading assesses the Street’s opinion on management, the sector, long-term growth prospects, competitive advantages, and product-market fit, among other qualitative factors, turned negative in 2021 due to management credibility issues.

The CEO had been optimistic about closing deals in 2021, but the delay into 2022 weighed on investors’ confidence causing the stock to be hit with a discount. The recent reveal of Pfizer as a collaboration partner is turning sentiment around as management is regaining credibility. This can cause the discount to be removed and improve prices in the near-term as investors re-gain confidence that previously promised deals will finally come to fruition.

Micro-cap healthcare stocks have also just suffered through a period of almost unprecedented underperformance relative to every other index. Historically, times like this have led to periods of dramatic outperformance.

Within this group, TFFP was hit particularly hard last year, losing 38%. However, the internal technicals for TFFP turned around late in the year with the stock trading up in Q4 despite a weaker group, and the chart is now looking more attractive.

StoryTrading consults with technical expert Rexman to identify resistance levels and bull targets. Following is his recent chart and analysis on TFFP. 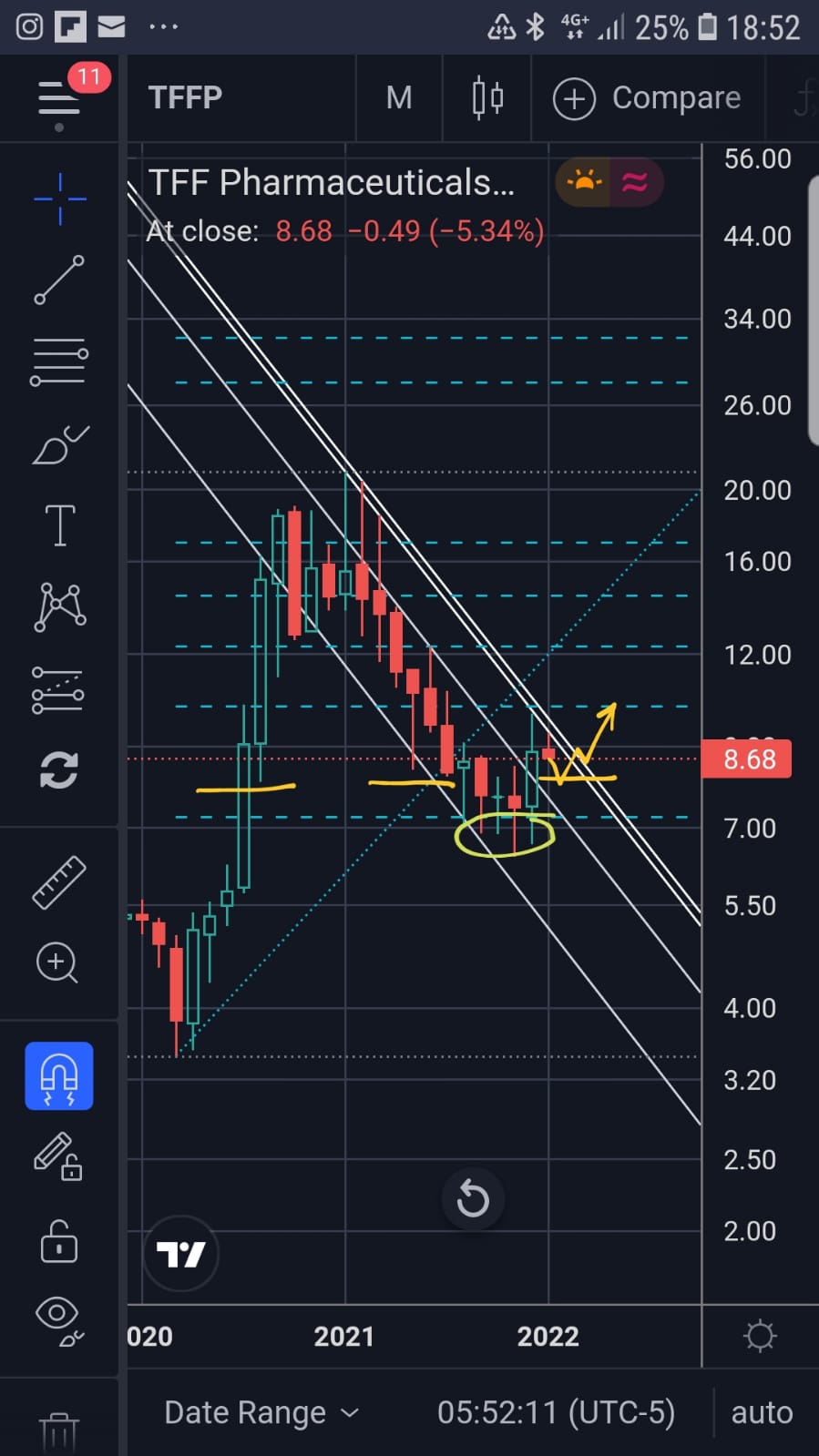 “Bull flag drawn from all-time highs. The low 7s has established a bottom support on the monthly imo. But I expect another consolidation to the low 8s/high 7s supports next (underlined), where it should pick up momentum for the next leg, which might break out the flag and push this to the 10s/11s, or even further up for the longer term.” You can find Rexman on Twitter.

It appears TFFP is positioned technically for a rally, but what will drive this to generate dramatic returns?

The company must execute on potential catalysts, make good on the CEO’s optimism and manage its cash, which was $44 million as of Sept. 30, 2021. The company says its cash position provides sufficient runway into 2023. 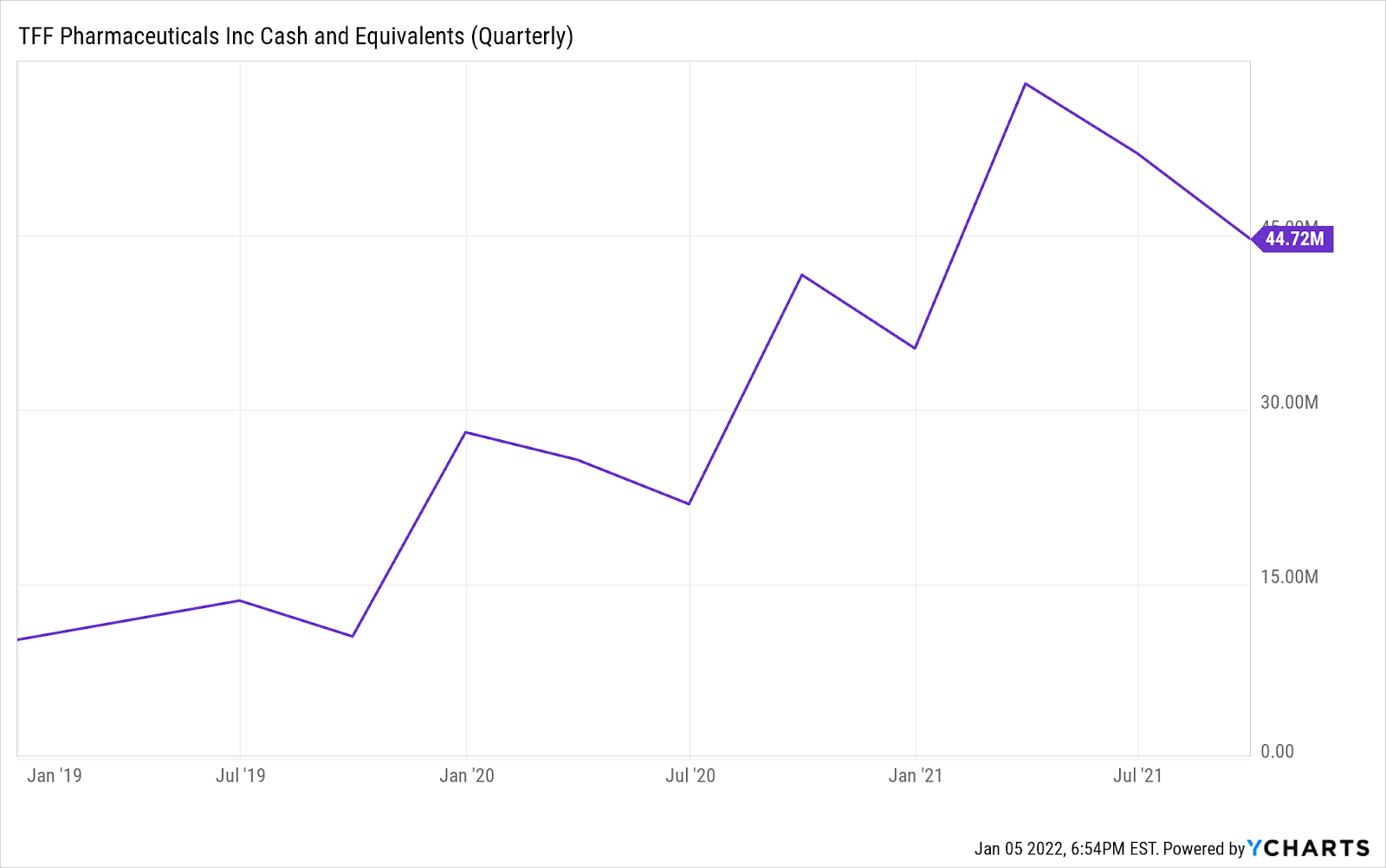 When Carlson picked up coverage on TFFP, he ran a sum of the parts analysis of the company. Based on his work, TFFP was worth more than its current value when looking solely at the two (at that time) internal programs, Voriconazole (VORI) and Tacrolimus (TAC). The rest of the story was simply upside.

Since then, the company has had many successes with its internal programs, added more to the mix, and has come a long way toward inking a major deal. Based on Carlson’s analysis, the stock could be more cheaply valued today than it was at $5 when he first got involved.

The initial values he came up with for VORI and TAC were, respectively, $5.80 and $10.55 per share. Since that time, both programs have completed highly successful phase 1 programs that have significantly expanded the market potential for both products.

As they enter phase 2 trials, Carlson’s NPVs are roughly double what they were before. Similar to Roth Capital, which values TFFP at $27 based solely on these two programs and their cannabis program, Carlson believes VORI and TAC will be worth about $30 a share sometime in the next year or two.

But the value of TFFP could go far beyond these two programs, even if you throw in the other internal programs of niclosamide and the Augmenta partnership. It’s the platform aspect of the technology that makes TFFP so exciting and could provide returns that are in the 5-10X range or even more over time.

The StoryTrading community empowers individuals to make the best informed trade and investment decisions through a holistic view of stocks based on the four pillars of Catalysts, Sentiment, Technicals, and Fundamentals. Analyzing all four pillars together can also help identify key inflection points.

Looking at catalysts, things may be starting to inflect for TFFP with the recent reveal of the Pfizer collaboration, which many investors still do not know about since a press release was not issued. Management delivering on this deal is improving sentiment which can eliminate prior discounts the stock was penalized with.

Technically, TFFP outperformed in Q4. While the stock was rocked early on in January with the rest of the market, momentum could soon continue when the next catalyst hits, putting TFFP in reach of Rexman’s target of $10+. At the same time, the company’s fundamentals should be in good shape for the year ahead, with a cash position of $44 million, which the company said is sufficient into 2023.

So will TFFP drive healthy returns in 2022? That’s for you and the rest of the market to determine. We’ll be here to tell the story as events unfold!