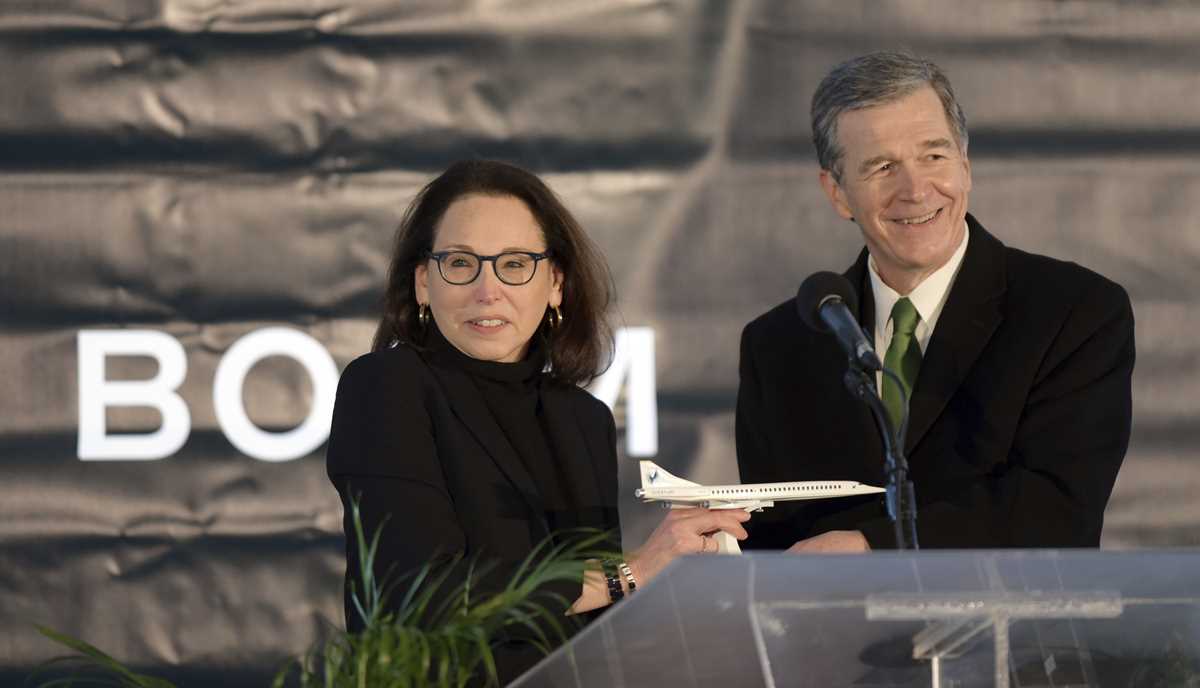 North Carolina Gov. Roy Cooper receives a model of Boom Supersonic’s Overture jet from Boom’s President and Chief Business Officer Kathy Savitt during an announcement, Wednesday, Jan. 26, 2022 that the aviation company will build its supersonic jet at Piedmont Triad International Airport in Greensboro, N.C. The company said it will employ more than 1700 people by the end of the decade. (Walt Unks/Winston-Salem Journal via AP) 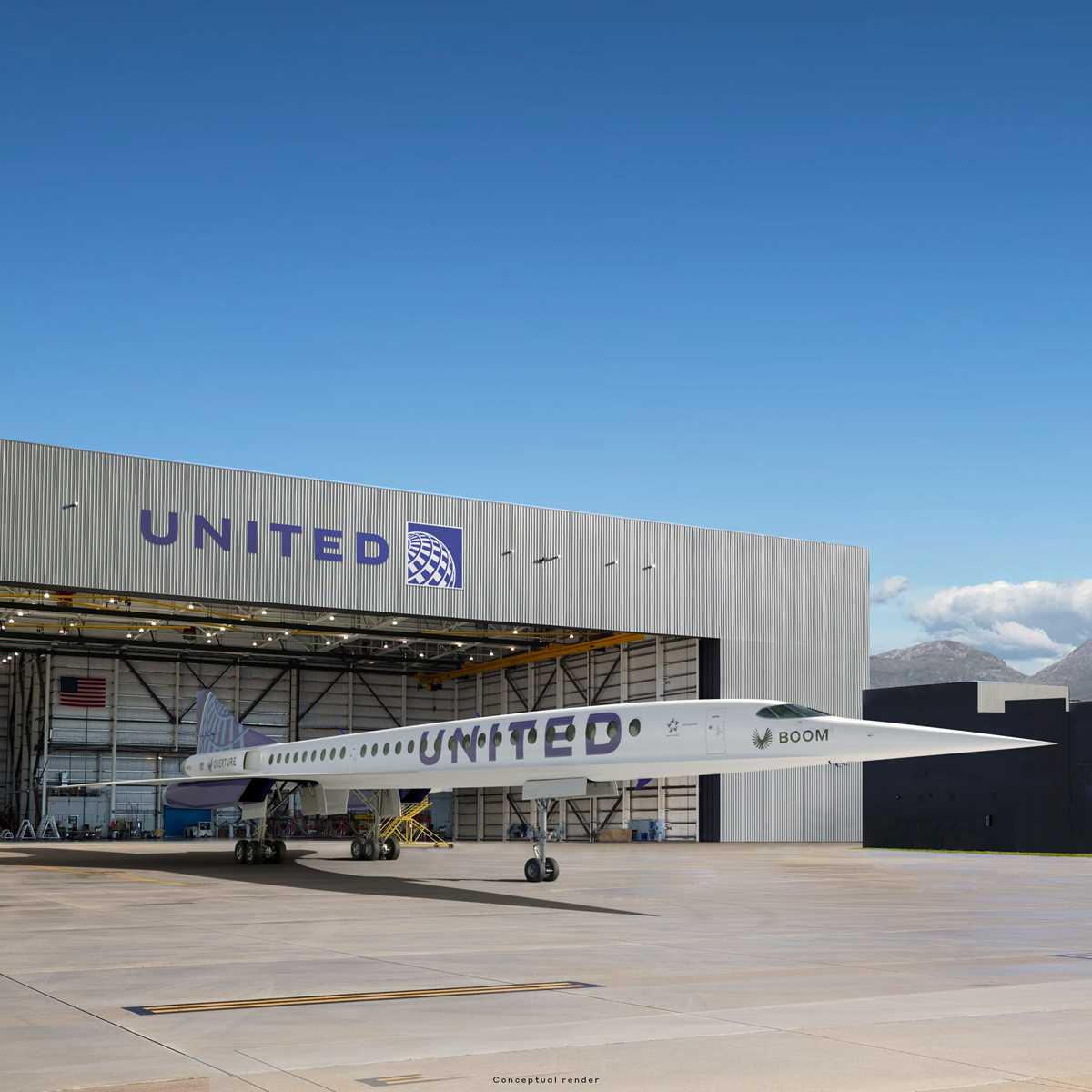 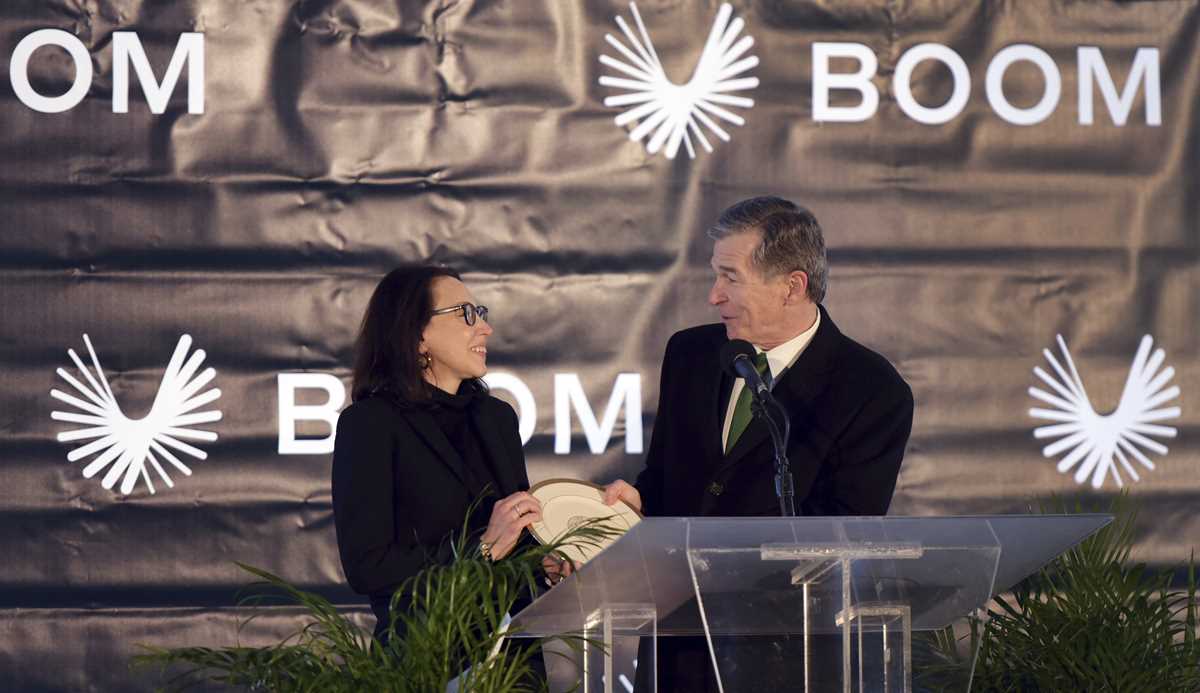 North Carolina Gov. Roy Cooper presents a gift to Kathy Savitt, President and Chief Business Officer of Boom Supersonic, during an announcement, Wednesday, Jan. 26, 2022 that the aviation company will build its supersonic jet at Piedmont Triad International Airport in Greensboro, N.C. The company said it will employ more than 1700 people by the end of the decade. (Walt Unks/Winston-Salem Journal via AP)

RALEIGH, N.C. (AP) — A Colorado-based aviation company announced on Wednesday that it has chosen a North Carolina airport as the location for a plant that will manufacture next-generation supersonic passenger jets. If successful, its investment could create more than 2,000 jobs in the region over the next decade while cutting flight times significantly for a post-Concorde generation of consumers.

Boom Supersonic announced that Piedmont Triad International Airport in Greensboro will be the home for its first full-scale manufacturing facility, including the final assembly line, testing and delivery center for its proposed Overture supersonic airliner. Boom estimates it will create 1,750 jobs by 2030, with a goal of reaching 2,400 jobs by 2032.

State and local governments have offered $230 million in financial incentives to make the project a reality, including money for airport improvements, which the legislature approved in November, and other sweeteners approved on Wednesday.

As is the case with most such projects, some of the incentives going to Boom Technology Inc., the company’s parent, will be canceled if it doesn’t meet job-creation goals and invest at least $450 million in the plant.

Jacksonville, Florida, and Greenville-Spartanburg, South Carolina, were also in the running for the plant, according to a state Commerce Department official who publicly briefed an incentives committee prior to the formal announcement. The project had been known to recruiters as “Project Thunderbird.”

The Overture plane is designed to carry 65 to 88 passengers, consume so-called sustainable aviation fuel and cruise at 60,000 feet (18,290 meters) at 1,300 mph (2,090 kph) — twice the speed of today’s passenger jets. Many technical and manufacturing hurdles still must be overcome before the aircraft becomes a practical option for airlines, however.

In a news release Wednesday, the company said the new factory will begin production in 2024, with the first Overture aircraft rolled out in 2025, flying in 2026 and carrying its first passengers by 2029.

The Piedmont Triad airport is already the headquarters of Honda Aircraft Co. and the production site for its seven-passenger HondaJet Elites.

“Boom is confident that Greensboro will emerge as the world’s supersonic manufacturing hub,” Scholl said.

Gov. Roy Cooper and other elected leaders and recruiters gathered in Greensboro for the announcement. It came less than two months after Toyota said it would build an electric vehicle battery plant in the region, which is a roughly 90-minute car trip west from Raleigh.

Cooper made a reference to the crowd about North Carolina’s “First in Flight” designation — it was on the Outer Banks that the Wright brothers’ completed the first powered self-propelled flights in December 1903.

“This afternoon, we’re launching the future of flight,” Cooper said. “We are ready with the education, the diverse workforce, with the transportation, with the good economy and with the quality of life necessary for success.” The average salary for plant employees is expected to be almost $69,000 annually.

Boom is one of several companies trying to revive supersonic passenger travel, which died with the grounding of the Concorde nearly two decades ago. Boom has built a one-third-size demonstrator aircraft called the XB1, but now it faces the daunting challenge of bulking that up.

Boom boasts of “pre-orders” from several potential customers including United Airlines, which last year announced plans to buy 15 copies of the Overture and take options for another 35. United, however, said any orders hinge on Boom meeting certain financial and operational targets, which it declined to describe in any detail.

Skeptics say that if supersonic passenger travel were really feasible, Boeing and Airbus would be building the planes instead of leaving the market to start-ups like Boom.

The Concorde flew over the Atlantic and was barred from many overland routes because of the sonic booms, and any new supersonic planes will face the same hurdles. Another factor that helped kill the Concorde was its high cost of operation. Scholl has said technology will help solve both of those challenges, and tickets should be in the range of current-day business-class fares.