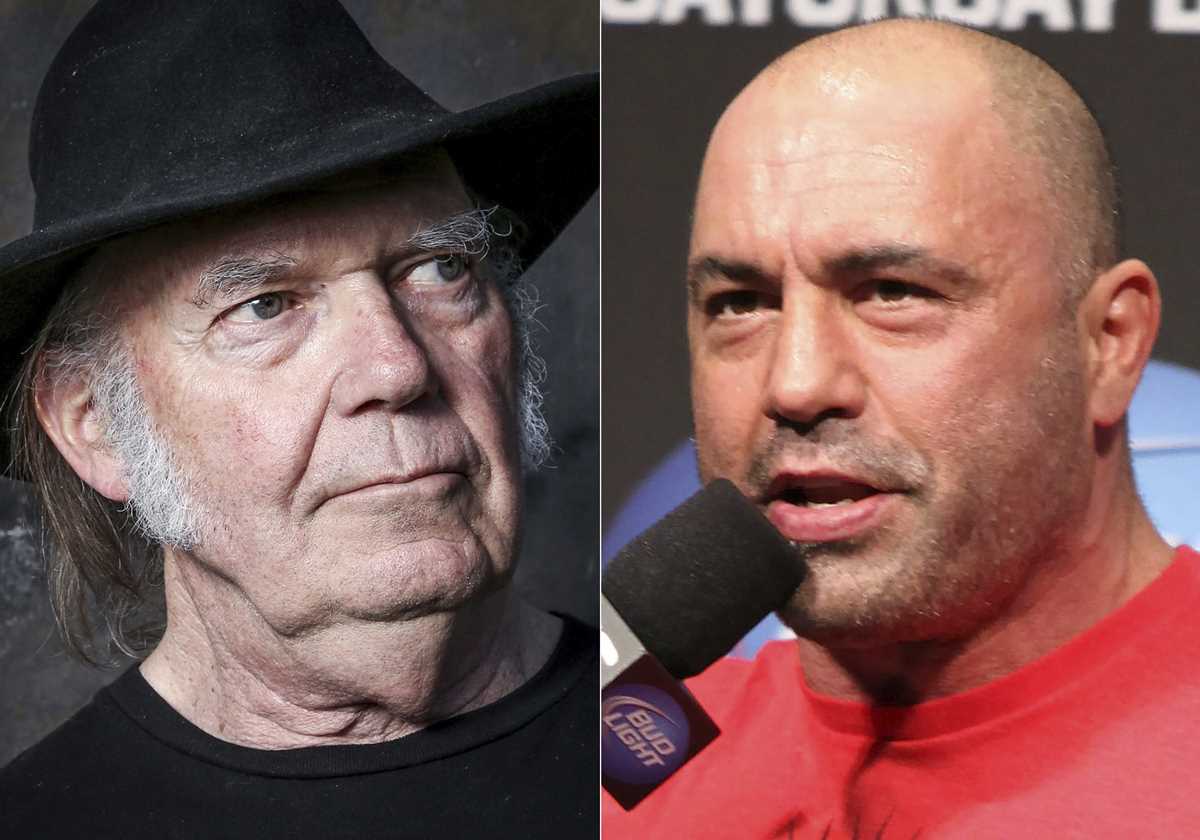 This combination photo shows Neil Young in Calabasas, Calif., on May 18, 2016, left, and UFC announcer and podcaster Joe Rogan before a UFC on FOX 5 event in Seattle on Dec. 7, 2012. Young fired off a public missive to his management on Monday, Jan. 24, 2022, demanding that they remove his music from the popular streaming service Spotify in protest over Rogan’s popular podcast spreading misinformation about COVID-19. But by Tuesday afternoon, his letter had been removed from his website, “Heart of Gold” and other hits were still streaming. (AP Photo)

NEW YORK (AP) — It’s Neil Young vs. Joe Rogan for the allegiance of Spotify. Or is it?

The veteran rocker fired off a public missive to his management on Monday, demanding that they remove his music from Spotify in protest of Rogan spreading misinformation about the COVID-19 vaccine on his popular podcast, “The Joe Rogan Experience.”

But the letter soon disappeared from view on Young’s website, and on Tuesday afternoon music fans could still listen to “Heart of Gold,” “Rockin’ in the Free World” and other Young hits on the popular streaming site.

Representatives for Young and Spotify did not return repeated requests for comment on Tuesday.

In his letter, Young made the request because Spotify “is spreading false information about vaccines — potentially causing death to those who believe the disinformation,” according to Rolling Stone magazine.

Young said Spotify “can have Rogan or Young. Not both.”

It may not be a choice Young’s management would want to force. Rogan’s podcast is wildly popular on Spotify. The 76-year-old rocker’s music has more than 6 million listeners, according to his artist’s page on Spotify.

Rogan provoked anger within the past month for interviewing Dr. Robert Malone on his podcast. Malone, an infectious disease specialist, has been banned for Twitter for spreading misinformation but has become a hero in the anti-vaccine community. He has questioned the COVID-19 vaccine’s effectiveness and falsely suggested that millions of people had been hypnotized into believing that the vaccines work to prevent serious disease.

A group of doctors and scientists have spread a petition online calling on Spotify to adopt policies to prevent the spread of misinformation on their platform.

Young has never been a rabid fan of Spotify. At his insistence, much of his music was removed from the platform for several months beginning in 2015 because of his concerns about audio quality.