The tech-heavy Nasdaq 100 Index staged a remarkable turnaround during Monday’s session to erase a 2% decline and finish in the green. Equities were once again under pressure as interest rate hike bets intensified, as the 10-year US Treasury yield briefly traded above 1.80% before retreating slightly. In a research note released Sunday, Goldman Sachs now projects four interest rate hikes from the Federal Reserve in 2022. This revision to the forecast reflects the increasing expectation that the Federal Reserve will aggressively move to tighten financial conditions.

Following the closing bell in New York, Fed Vice Chair Richard Clarida announced his intention to retire effective January 14th, 2022. Clarida has served at the Fed since 2018, and his term was set to expire on January 31st, 2022. More can be found here.

Many large constituents of the Nasdaq 100 were under pressure on Monday, most notably Take-Two, which dropped over 15% after they announced the purchase of Zynga. Apple, Tesla, and Nvidia were all sharply lower early in the session, but staged strong rebounds to finish the session in positive territory. Despite the rebound on Monday, the Nasdaq 100 Index may remain vulnerable as Federal Reserve Chairman Jerome Powell heads to Capitol Hill for his nomination hearing. 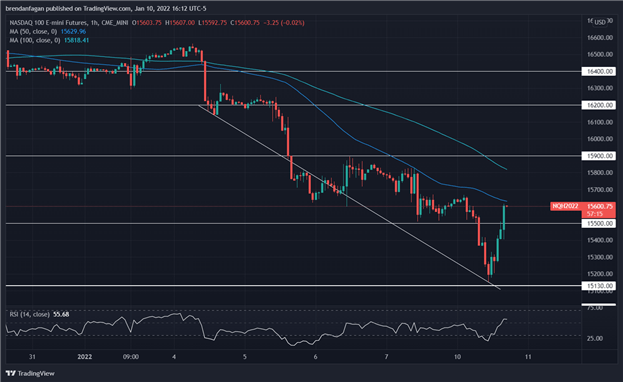 Monday’s session lows for the Nasdaq 100 Index coincided with the 15,130 level, which in the past has acted as a significant pivot point. While bulls were able to step in at this level and carry the index back above 15,600, near-term headwinds do remain with significant event risk on the calendar. As mentioned, Fed Chair Jerome Powell heads to the Senate for his nomination hearing, while Wednesday will see the release of key CPI (Consumer Price Index) data.

Courtesy of the DailyFX Economic Calendar

Whether you are a new or experienced trader, we have several resources available to help you; indicator for tracking trader sentiment, quarterly trading forecasts, analytical and educational webinars held daily, trading guides to help you improve trading performance, and one specifically for those who are new to forex.