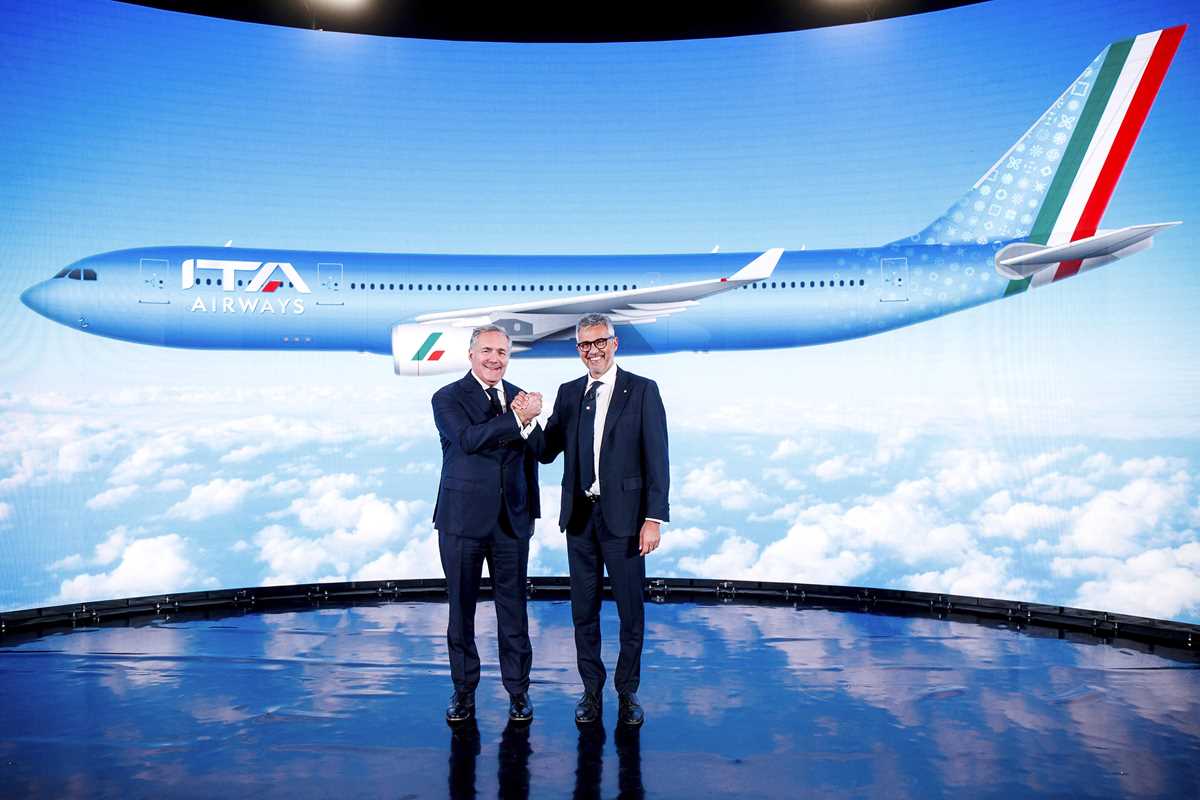 Fabio Lazzerini, right, CEO of new national carrier ITA, poses with President Alfredo Altavilla during the presentation in Rome, on Oct. 15, 2021. The parent group of MSC Cruises is partnering with Lufthansa in a bid for a majority stake in Italy’s ITA Airways, the company created from the ashes of former Italian flagship airline Alitalia. MSC Group, which runs cruise ships, said in a statement late Monday that the deal would leverage synergies in both passenger and cargo, and that Lufthansa has already shown interest in the deal. (Roberto Monaldo/LaPresse via AP)

MILAN (AP) — The parent group of MSC Cruises is partnering with Lufthansa in a bid for a majority stake in Italy’s ITA Airways, the company created from the ashes of former Italian flagship airline Alitalia.

MSC Group, which includes container shipping and logistics businesses in addition to cruises, said in a statement late Monday that the deal would leverage synergies in both passenger and cargo, and that Lufthansa has already shown interest in the deal.

The companies have requested that the Italian government, which currently controls ITA Airways, grant a 90-day period for exclusive talks and due diligence. Lufthansa said it would use the 90-day period to “explore all possible options for cooperation, including a possible equity investment.”

“Let’s hope that the conditions are maintained until the end of this adventure,” he said.

Altavilla also said he also saw synergies with cargo, which is one of the most profitable parts of the business.

ITA Airways has been looking for an industrial partner, and a successful conclusion to the MSC-Lufthansa operation could secure the future for the airline that succeeds long-struggling Alitalia.

At one point, former Premier Silvio Berlusconi nixed a bid by KLM-Air France to buy Alitalia, citing its importance as a strategic asset, only to hand it over to a group of reluctant Italian investors, who eventually sold a 49-percent share to Abu Dhabi Etihad in 2014. By 2017, Alitalia was in its second bankruptcy in a decade.

“Lufthansa looks like a solid airline-centered business,” Alegi said. ”It has been running airlines for almost 100 years, it is a very efficient well-run company, and all the indications are that it would run on an industrial and not a political basis. If that holds, it would be the end of the saga.”

He added that the MSC partnership “seems to hit at a business model oriented toward leisure traffic.”

ITA has 52 planes that it says will grow to 105 and is pointing to next-generation aircraft that use sustainable, alternative fuel sources.

7 Trucking Stocks That Are About to Go On a Roll

Americans are facing a historic supply chain crisis. The solutions are simple on the one hand and
maddeningly complex on the other. And no industry embodies that complexity more than the trucking
industry. Just getting the barges unloaded will not be enough. Those goods have to be transported to a
final destination.

For that, we’re going to need trucks. And those trucks will need drivers. According to the American
Trucking Association (ATA), approximately 70% of consumer goods in the United States are transported
by trucks. However, for a variety of reasons, the industry faces a shortage of qualified drivers.

How extreme is that shortage? The ATA estimates that the shortage of qualified truck drivers sits at over
50,000 and continues to grow. In fact, it suggests that over 900,000 drivers are needed and there simply
are not enough qualified drivers to meet that demand.

We’re not going to see one million new drivers on the road by the end of the year. And even if we did,
trucking companies will be a beneficiary as the industry rises to meet this moment. This also means that
investors should be eyeing trucking stocks. And that’s why we’ve prepared this special presentation
which identifies seven trucking stocks that are excellent opportunities at this time.

View the “7 Trucking Stocks That Are About to Go On a Roll”.