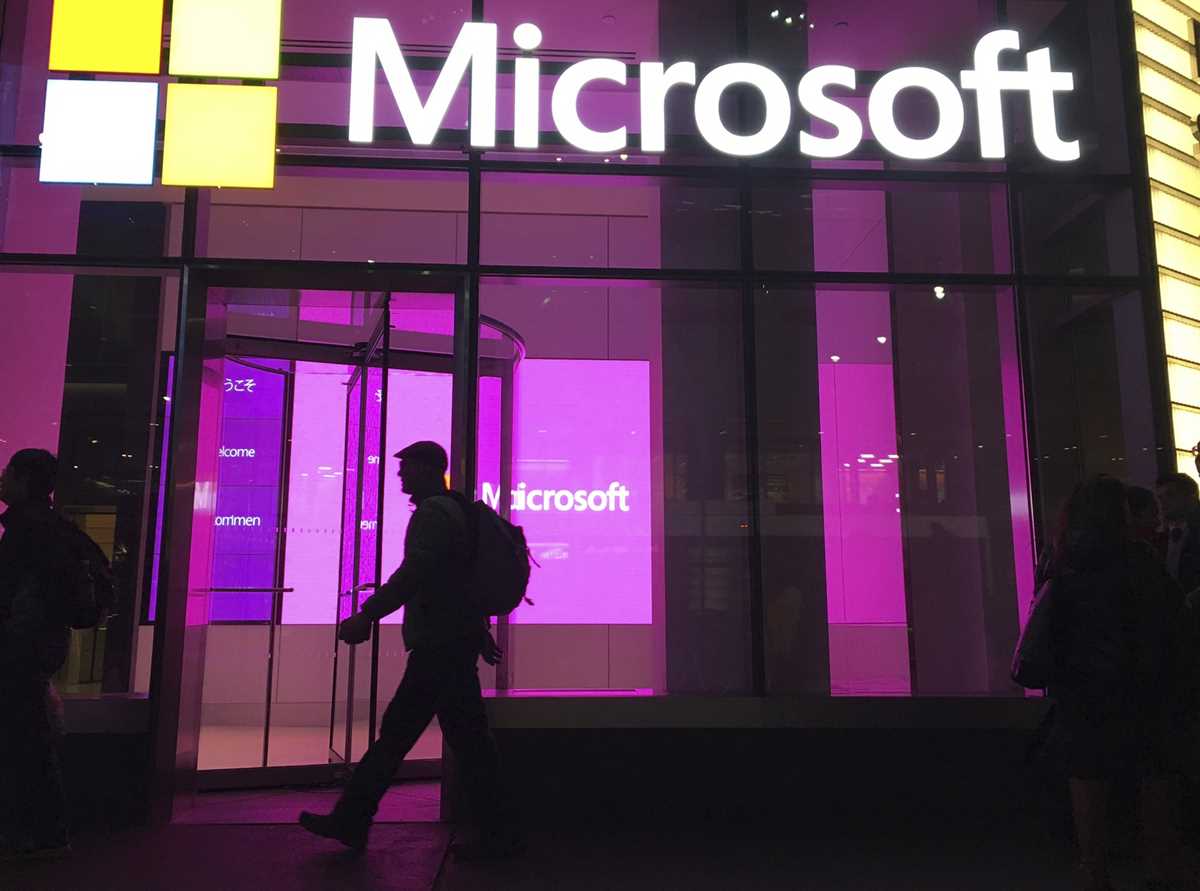 A sign for Microsoft offices, Thursday, May 6, 2021 in New York. Microsoft stunned the gaming industry when it announced, Tuesday, Jan. 18, 2022, it would buy game publisher Activision Blizzard for $68.7 billion, a deal that would immediately make it a larger video-game company than Nintendo. (AP Photo/Mark Lennihan)

In this Nov. 10, 2016, file photo, people walk past a Microsoft office in New York. Demand for Microsoft’s cloud-computing services and work software helped boost its quarterly profits by 21% as the pandemic kept many office workers at home. The company on Tuesday, Jan. 25, 2022, reported fiscal second-quarter profit of $18.8 billion. (AP Photo/Swayne B. Hall, File)

REDMOND, Wash. (AP) — Demand for Microsoft’s cloud-computing services and work software helped boost its quarterly profits by 21% as the pandemic continued to keep many office workers at home.

The Redmond, Washington company on Tuesday reported fiscal second-quarter profit of $18.8 billion. It posted revenue of $51.7 billion for the October-December period, up 20% from a year earlier.

Microsoft last week announced its plans to buy high-profile game publisher Activision Blizzard for $68.7 billion, an all-cash deal that could be the priciest tech acquisition in history if it withstands scrutiny by antitrust regulators. It could also catapult the Xbox-maker ahead of Nintendo to join Sony and Tencent as one of the three biggest video game companies.

But the financial results revealed Tuesday show it’s still business-focused products such as Microsoft’s Azure cloud computing platform and its suite of software products that are driving the company’s growth.

Net income of $2.48 per share beat Wall Street expectations. Analysts surveyed by FactSet were expecting Microsoft to earn $2.32 per share on revenue of $50.71 billion for the fiscal quarter.

Sales from Microsoft’s cloud computing business segment grew 26% to $18.3 billion in the quarter ending in December.

The company late last year halted its localized version of LinkedIn in mainland China, citing tightening government restrictions affecting the only major Western social networking platform that had still operated in the country.

Microsoft’s personal computing business, which includes Windows software licenses, Xbox and its Surface line of devices, grew by 15% to $17.5 billion.

Holiday gadget sales typically make the October-December quarter an important one for Surface devices and Xbox games and consoles. The company said Xbox content and services revenue grew 10% over the same time a year earlier. Xbox hardware revenue grew more modestly at 4% — in part because numbers in late 2020 had been boosted by the release of Microsoft’s Xbox Series X system, the company’s first new console since 2013.

Microsoft expects that snapping up Activision, the owner of popular games such as Candy Crush, Call of Duty, Overwatch and World of Warcraft, will boost demand for its Xbox Game Pass subscription service while also advancing its broader ambitions for creating immersive virtual worlds.

7 Cyclical Stocks That Make Sense In a Volatile Market

Despite many predictions of an imminent, and possibly severe, market correction, 2021 has been a great year for investors. And that’s particularly true for investors who invested in cyclical stocks. This group of stocks was hit hard as the economy ground to a halt. This makes sense because cyclical stocks move in the direction of the broader economy.

But that’s also why, almost immediately, many of these stocks began to come back. And with the economy reopening, these stocks continue to show strength.

Cyclical stocks are commonly dividend into companies that manufacture durable goods, non-durable goods, or deliver services. At any given time, one or more of these sectors has outperformed others. But for the most part investors that bought into cyclical stocks continue to be rewarded.

In this presentation, we’ll take a look at seven cyclical stocks that are proving to be resilient even as the market continues to baffle even the most experienced investors.

View the “7 Cyclical Stocks That Make Sense In a Volatile Market”.