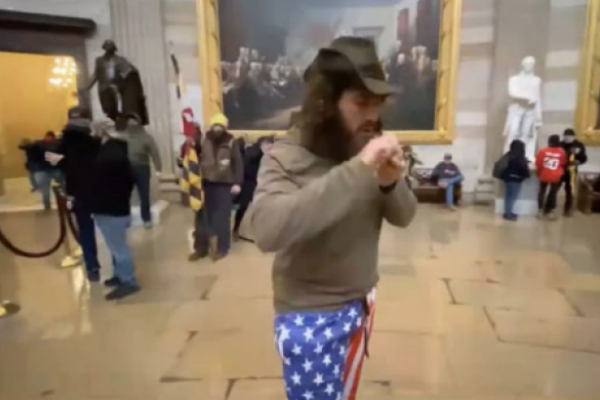 Eduardo Nicholas Alvear Gonzalez, aka Nick Alvear, although better known as the “Capitol Rotunda Doobie Smoker,” Zoomed numerous photographs and videos of himself smoking up a storm as he took a break from tearing up the U.S. Capitol building on Jan. 6, 2021.

“Here it is, me blazing up at the Capitol. Mary Jane,” Gonzalez said to his Zoom followers, who apparently, or at least eventually, included the FBI.

After Gonzalez’s 1-hour Zoom, which included commentary on having already smoked three joints at the “Stop the Steal” rally earlier in the day, he noted that he still had eight left when he went into the Rotunda, which he proceeded to hand out to fellow rioters.

“Time to smoke weed in here,” Gonzalez yelped then handed his camera to another rioter who recorded him lighting a pipe.

Then in February, Gonzalez was at it again. The California resident proudly posted a now unavailable YouTube video called “Smoking with brotunda” from a friend’s house in Virginia Beach, where he was supposedly laying low. He talked about hiding in the closet when a police officer came to the house earlier that day. But now we’re cool, Gonzalez assured his followers.

“We are here now. We are alive and safe,” Gonzalez said in the video. “I think the whole riot is going to be safe, like, we’ll be good, absolutely … I’m out of weed.”

Not only had Gonzalez run out of weed, he’d run out of time. The FBI arrested him the next day.

Gonzalez was charged with knowingly entering or remaining in a restricted building or grounds without lawful authority and violent entry and disorderly conduct on Capitol grounds.

Though Gonzalez’s rowdy weed smoking was documented extensively in his own Zoom videos and in multiple FBI statements against him, prosecutors did not mention it during his plea agreement hearing in late September, in which he pleaded guilty to one count of parading, demonstrating or picketing at the Capitol — a misdemeanor offense that holds a maximum prison sentence of six months.

According to the U.S. Attorney’s Office of the District of Columbia, Alvear was meant to be sentenced Jan. 5, 2022, but as yet there is no news except to note that so far, sentencing determinations for those who accepted the same plea have not included any jail time.

Alvear’s YouTube channel Good Lion TV is still broadcasting, though it’s slightly toned down from his normal QAnon conspiracy theory videos that tell viewers we may be living in a simulation, the earth is flat and the Smithsonian Institution is hiding evidence of giants.