Tesla, Inc TSLA shot up over 8% on Tuesday, after Elon Musk cut the ribbon at Giga Berlin, the EV maker’s first manufacturing plant outside the U.S. and China.

On CNBC’s “Squawk On The Street,” Jim Cramer said he believes Tesla will lead the overall market higher and likened Tesla’s dominance in the EV market to that of Ford Motor Co F when it commanded the automobile market in the early 20th century.

Earlier on Tuesday, Jefferies analyst Mark Philippe Houchois, reduced the stock’s price target from $1,400 to $1,250. Although Houchois remains bullish on Tesla, macro and geopolitical events present risk, according to Jefferies. If Tesla’s stock is able to reach Jefferies’ revised target, it would represent an increase of over 26% from the current share price.

On Tesla’s current trajectory, having soared up 31% over the past six trading days, a drive toward a new all-time high of $1,250 isn’t impossible, but if the stock reaches the level, it won’t be without pitstops along the way.

The Tesla Chart: On March 14 and March 15, Tesla printed a bullish double bottom pattern at the $956.04 level and on March 16, the stock reacted bullishly and has closed each trading day since that date at a higher price. Tesla hasn’t printed a higher low to confirm the uptrend, however, and will eventually need to retrace.

The pullback to print a higher low could come soon because on Tuesday, Tesla’s relative strength index (RSI) was measuring in at about 64%. When a stock’s RSI nears or reaches the 70% level, it becomes overbought, which can be a sell signal for technical traders.

The move higher on Tuesday was taking place on higher-than-average volume, which indicates a high level of traders and investor interest in the stock. By late afternoon, over 24 million Tesla shares had exchanged hands, compared to the 10-day average of 24.52 million. 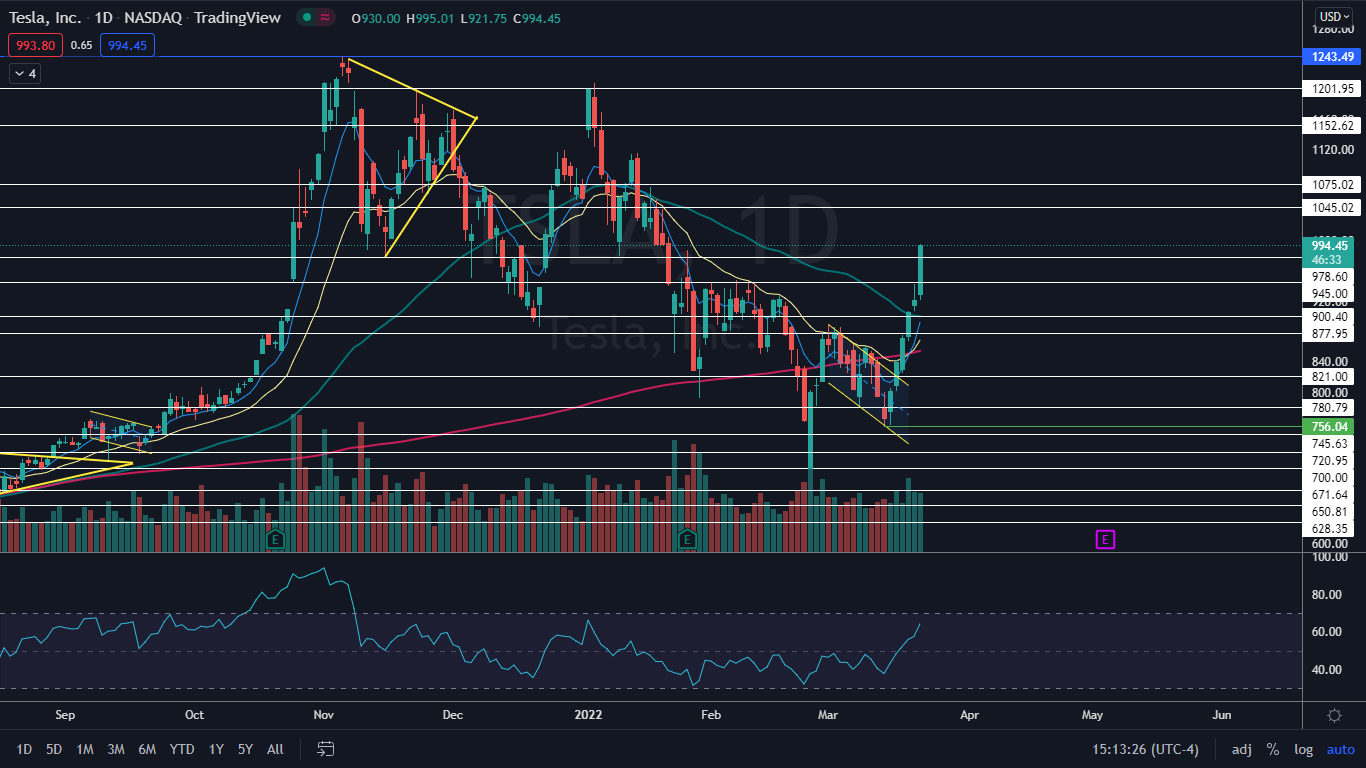