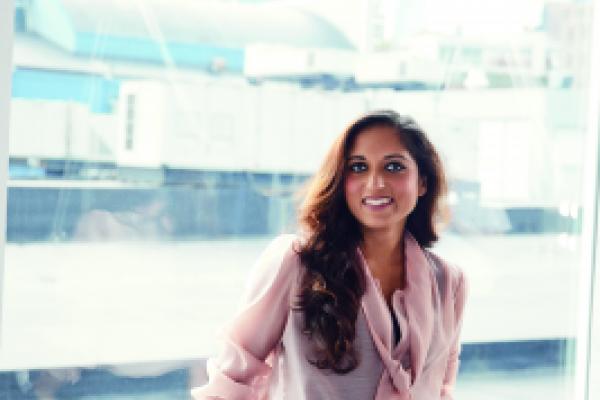 When Dheerja Kaur joined Robinhood Markets Inc (NASDAQ: HOOD) as its head of consumer products in April of 2020, she had no idea the company was about to enter the stratosphere.

Robinhood, which had already entrenched itself as the most popular trading app, ended 2019 with a valuation of $7.6 billion and about 10 million monthly active users. But the ensuing year brought a whole new level of growth for the company.

Led by a dramatic increase in retail investor interest in the stock and crypto markets, Robinhood’s revenue nearly tripled in 2020 to $959 million; through the first three quarters of 2021, that figure was at $1.4 billion.

Against this backdrop, the company has been feverishly developing new products to keep pace with user demand, including everything from IPO access, to Robinhood Snacks, to a crypto wallet.

Kaur, who has helped spearhead these products, recently caught up with Benzinga to share the three biggest lessons she’s learned in her career.

Lesson 1: Don’t be afraid to bring a new perspective to an old problem

This is hardly surprising given Kaur’s unconventional career path. After studying industrial engineering and operations research at Columbia, Kaur began her career as a web developer at ESPN, despite the fact that she had taken just four web development classes in college.

“I ended up interviewing for a web development role with little experience including a few SQL tricks, and the ability to recite a decade worth of the Jets regular-season records,” Kaur told Benzinga. “I ended up getting the job, thanks to an awesome team taking a chance on the crazy Jets fan without a CS degree, but with a passion to learn.”

From there, Kaur led the development of Grantland.com, the project of star sportswriter Bill Simmons. At Robinhood, Kaur has applied those media learnings to inform Robinhood Snacks, which boasts newsletter readership of over 23 million readers and a podcast with over 10 million downloads.

It’s easy to enter industries like finance or media and mold to the age-old way the industries think and operate,” she said. “I think the most successful companies tap into new ways of thinking about a problem, and challenge the status quo.”

Lesson 2: Empathy, humility, and being human are more important than any skills

Despite Kaur’s career success, first at ESPN then as the Chief Product Officer at theSkimm and now at Robinhood, Kaur stressed that one of the most important things she learned is to be supportive of those around you, especially because it’s not something companies are always mindful of.

“These tend to be under-appreciated traits in leaders, but have a huge impact on how you authentically lead and build culture,” she said.

Kaur experienced this firsthand. Early in her career, she struggled with imposter syndrome and understanding that she belonged. She’s overcome that, she said, thanks in part to professional mentors who have helped her along the way.

“I often felt like I didn’t deserve to be there. Imposter syndrome is well-documented, and I’ve read so many accounts of women and under-represented minorities feeling like they weren’t qualified for a role they very clearly were. But it still took me a while to realize it was something I felt through so much of my entire career. I was lucky to have extremely supportive managers who were my personal cheerleaders.”

Lesson 3: Everything I do should have a 30% chance of failure

Whether it’s launching an independent website under the umbrella of a sports behemoth, figuring out more content strategies for an emerging women’s-focused media brand, or creating educational content for traders and investors, Kaur emphasized the importance of failure.

Though she said this mantra makes her “want to throw up,” Kaur swears by the idea of pushing beyond the point of comfort, both in her career and in product design.

“This mantra has been huge in pushing myself to constantly learn and be challenged. It’s also helped me overcome insecurities and be okay with taking risks in my career.”