I spoke a lot about high beta stocks this past week.

But what exactly are high beta stocks and why is this subject so important right now?

Much more than just buying and selling, trading is about proper risk management.

So as the market continues to struggle with recovering Wednesday’s sharp FOMC minutes-induced losses, I want to take this opportunity to explain why it is so important to understand the beta of the stocks you are looking to trade, and I want to give you a high beta trading idea that can benefit from the recent increase in volatility.

Before we get going here, don’t forget that you can always join me every Monday at 11 am live as I trade and review my setups with you as I’m watching the markets.

You don’t want to miss any of this action!

What in the world is a stock’s beta and why is it so important now?

Finding a stock’s beta is easy

Many charting services these days allow traders to place beta as an indicator on their price charts. In addition, many online brokers and data services provide beta as part of their stock statistics offering.

Below is just one example of a very popular and free method for finding a stock’s beta.

This first image shows that when you simply search “GOOGL beta” using Google search, the first item on the results page is a Yahoo Finance summary that includes the stock’s beta. 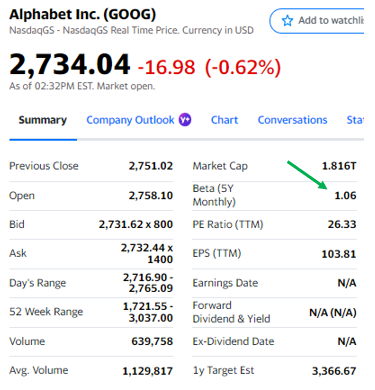 One thing that is important to understand is that there is not a consistent method for calculating beta, so the number may differ a bit between providers.

This might compare to your online broker that may use 24 or 48 months of data.

In the end, though, the beta figures shouldn’t vary too wildly.

Right now, I’m really targeting stocks that have a -3 ATR move to the downside.

Those are what I think are the highest probability trades for put selling right now after they test a level for a few days.

As this next chart shows, GOOGL is one of those stocks that is close to falling to such an extreme level.

Oh, and it’s also helpful that the 200-day moving average is coming into the picture as support soon. 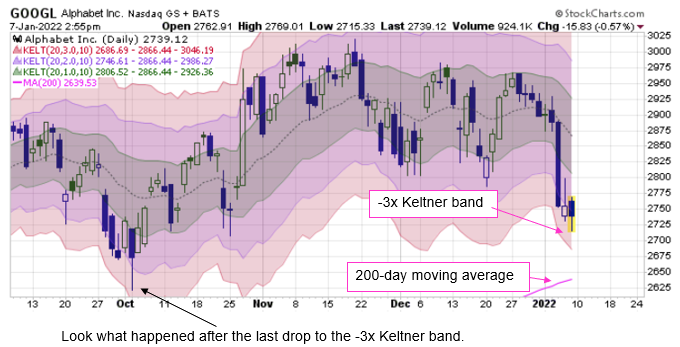 You can also see on the chart above that the last time Google had a -3 ATR was in October and then began to rally to new all-time highs a month after that?

With all of this information in hand, I am looking to sell a bull put spread (also known as a credit call spread) in GOOGL during this dip.

GOOGL just doesn’t get to oversold very often and we’re also at the -3 ATR there.  I would be really surprised if we see $2700 get taken out.  I don’t think GOOGL is one of those overpriced software stocks like AFRM, UPST, SE, etc that should get taken out to the woodshed.

If you would like to know more about why a trader, like myself, would choose to use a bull put spread you can find out all about it HERE. along with more about taking advantage of the jump in volatility we are currently seeing.