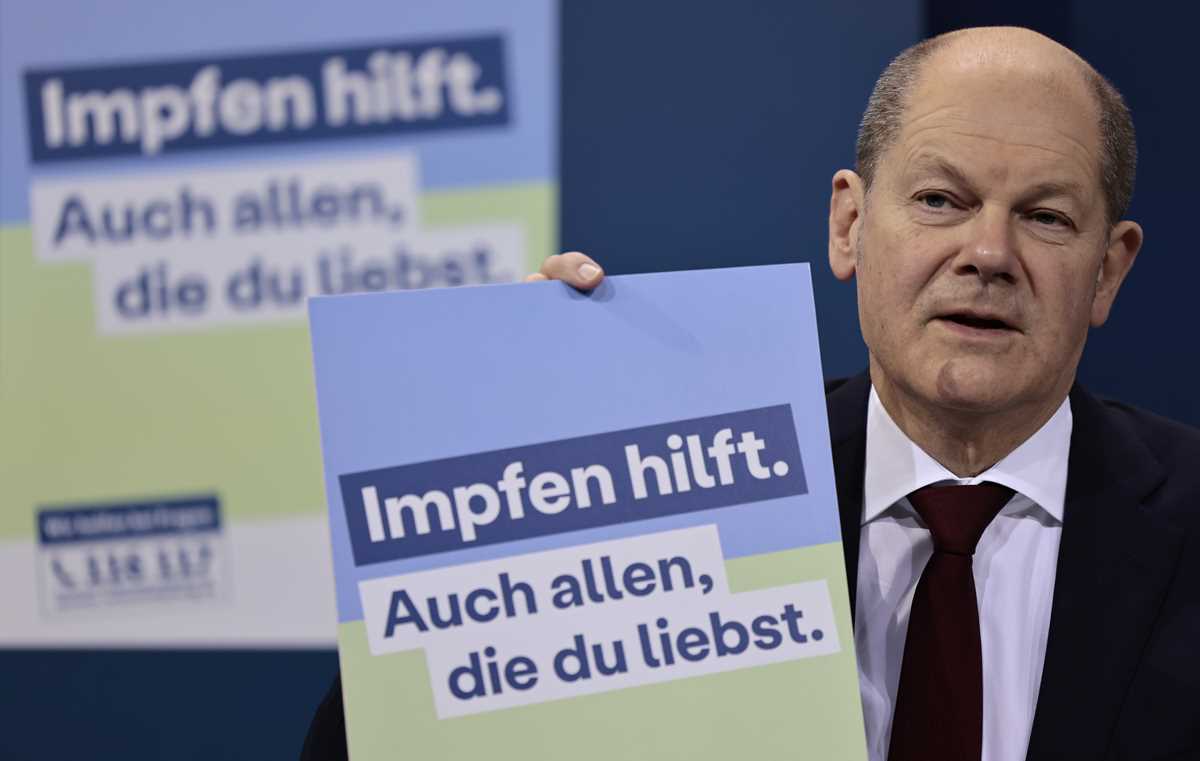 German Chancellor Olaf Scholz presents a poster of a new vaccination campaign during a press conference after a meeting at the Chancellery in Berlin, Germany, Monday, Jan. 24, 2022. German Chancellor Olaf Scholz met the governors of the country’s 16 states to discuss the coronavirus situation and the measures to combat the virus. Poster reads: “Vaccination helps. It also helps everyone you love.” (AP Photo/Hannibal Hanschke, pool)

BERLIN (AP) — Germany’s parliament is set to hold its first debate Wednesday on a possible wide-ranging coronavirus vaccine mandate, with three options emerging: obligatory vaccinations for all adults or for everyone above 50, or no mandate at all.

German politicians of all stripes long insisted that there would be no vaccine mandate. But the tide turned late last year amid frustration that a large number of holdouts was hampering the fight against COVID-19.

Shortly before he became chancellor in December, Olaf Scholz came out in favor of a vaccine mandate, predicting that it would take effect in February or early March.

That timetable has slipped, in part because of the path Scholz has chosen. The government isn’t putting forward legislation itself, but leaving groups of lawmakers to come up with cross-party proposals and then allowing members of parliament to vote according to their conscience rather than along party lines.

That device that has been used before to tackle ethically complicated medical questions, most recently in early 2020 to decide on rules for organ donors.

On Wednesday, lawmakers are due to kick off proceedings with an “orientation debate.” It isn’t yet clear when legislation will go to a vote, but it appears that it could be well into the spring before any law takes effect.

Three proposals have emerged so far from lawmakers in Scholz’s three-party governing coalition.

There is a call for a vaccine mandate for everyone age 18 and above, which would be valid for two years and cover a maximum three shots, with fines for holdouts. A rival proposal calls for obligatory counseling meetings for the unvaccinated, to be followed by a vaccine mandate for over-50s if progress is unsatisfactory. And one group wants to prevent any mandate.

Exactly how compliance would be checked is unclear. Germany lacks a central vaccination register.

The center-right Union bloc, the main opposition party, has insisted that the government should produce its own legislation and complained that Scholz has failed to provide leadership.

Last month, the German parliament approved legislation that will require staff at hospitals and nursing homes to show that they are fully vaccinated or have recovered from COVID-19 by mid-March.

Last week, neighboring Austria became the first European country to approve a vaccine mandate for all adults, which will become law on Feb. 1 and be enforced from mid-March.

Some other European countries have introduced mandates for specific professions or age groups. Greece has a mandate for over-60s and Italy for over-50s.

As of Tuesday, at least 73.5% of Germany’s population was fully vaccinated and 50.8% also had received a booster. The pace of vaccinations has slowed again after speeding up last month.