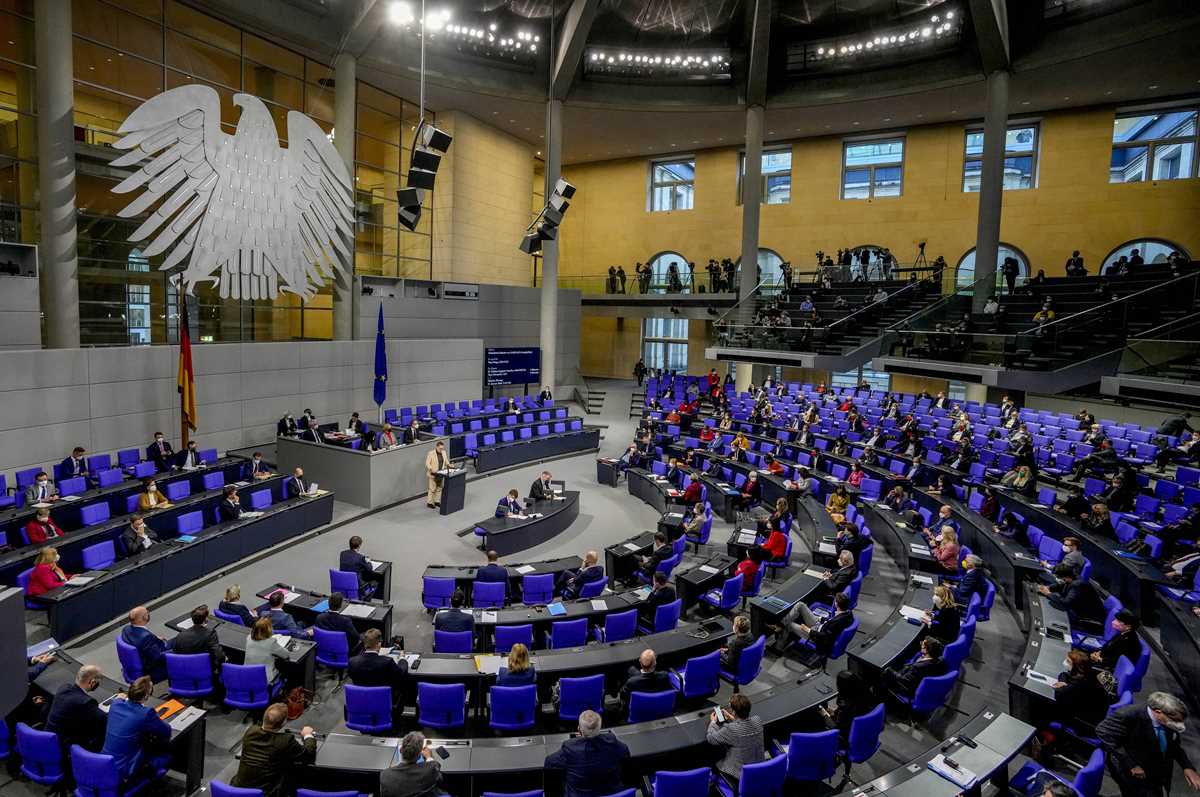 Lawmakers attend a debate about a vaccination mandate at the parliament Bundestag in Berlin, Germany, Wednesday, Jan. 26, 2022. (AP Photo/Markus Schreiber) 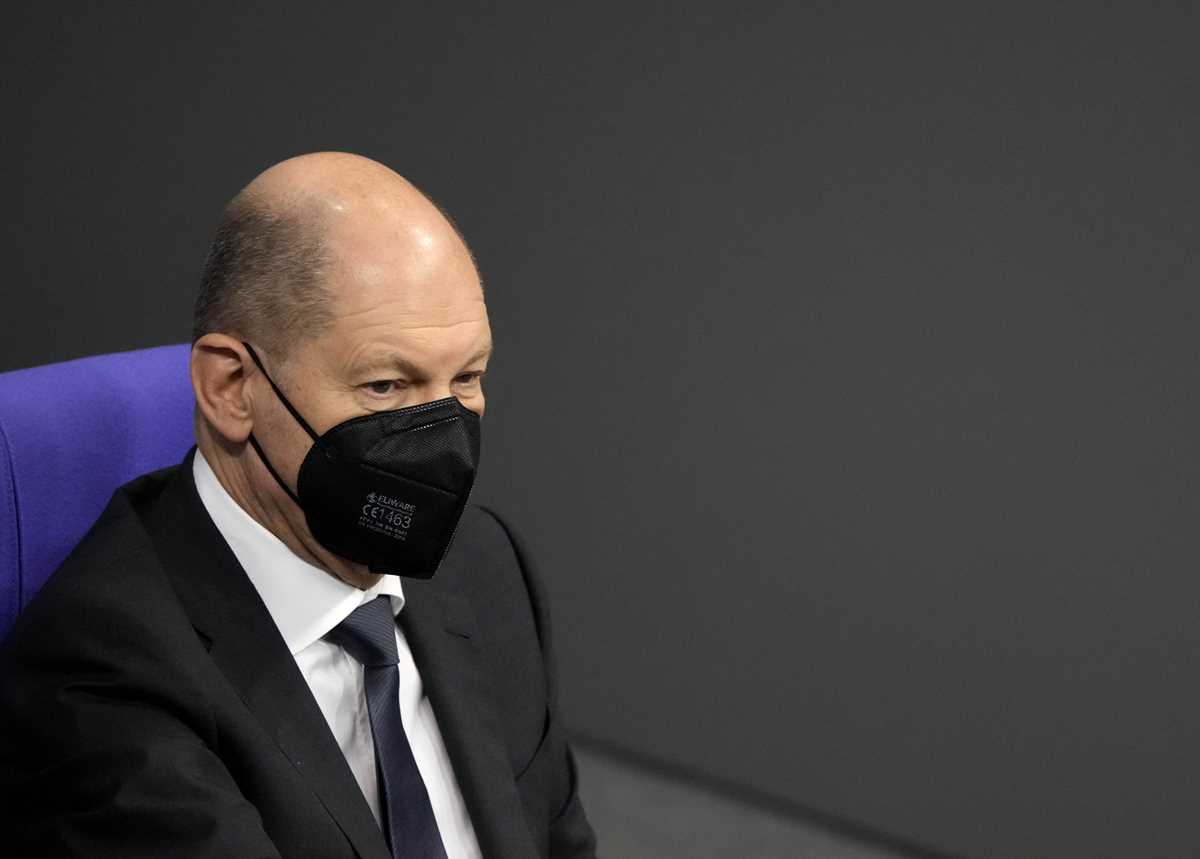 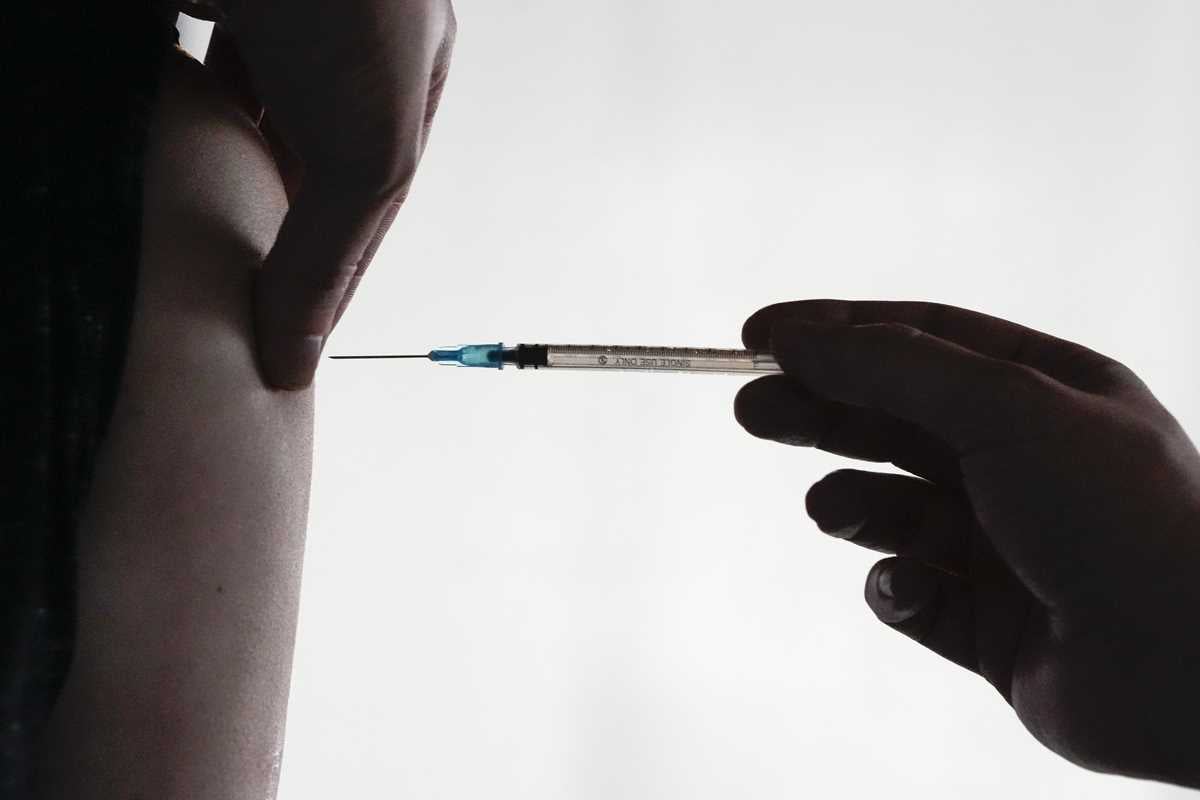 A doctor injects vaccination against the coronavirus and the COVID-19 disease to a man inside the Klunkerkranich restaurant and night club during an ongoing vaccination campaign of the Clubkommission in Berlin, Germany, Wednesday, Jan. 5, 2022. Germany’s parliament is set to hold its first debate Wednesday on a possible wide-ranging coronavirus vaccine mandate, with three options emerging: obligatory vaccinations for all adults or for everyone above 50, or no mandate at all. (AP Photo/Markus Schreiber, File) 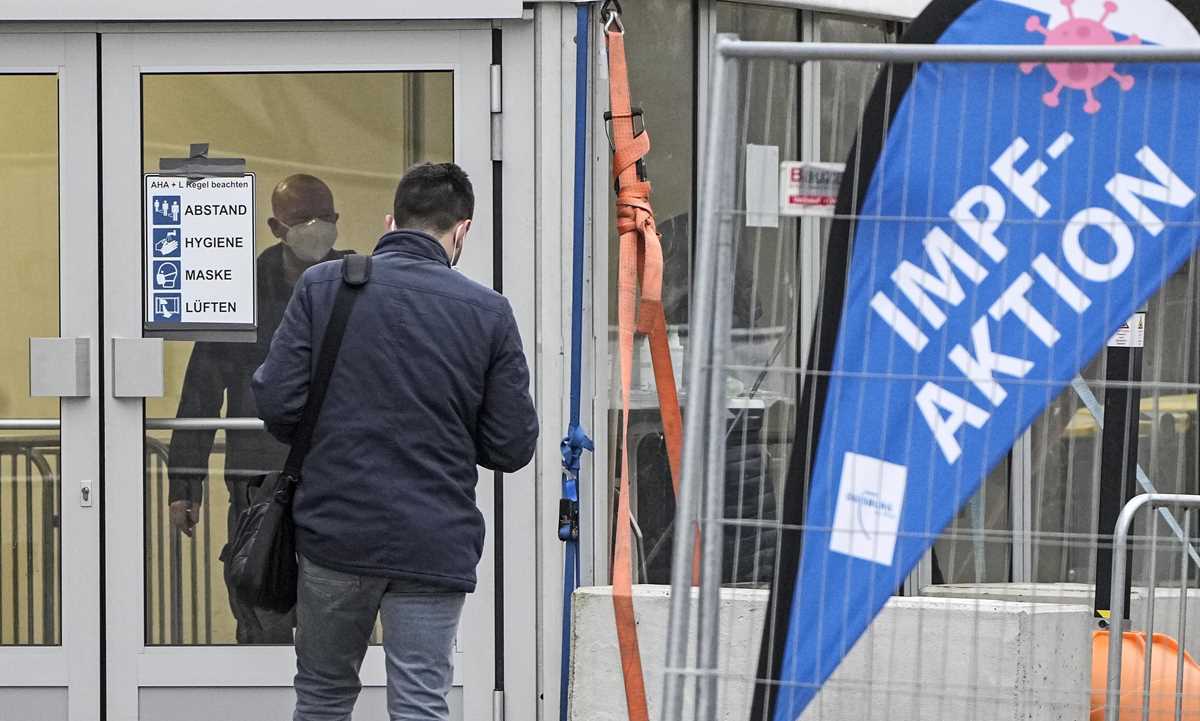 A man enters a coronavirus vaccination center in Duisburg, Germany, Tuesday, Jan. 25, 2022. Germany’s parliament is set to hold its first debate Wednesday on a possible wide-ranging coronavirus vaccine mandate, with three options emerging: obligatory vaccinations for all adults or for everyone above 50, or no mandate at all. (AP Photo/Martin Meissner) 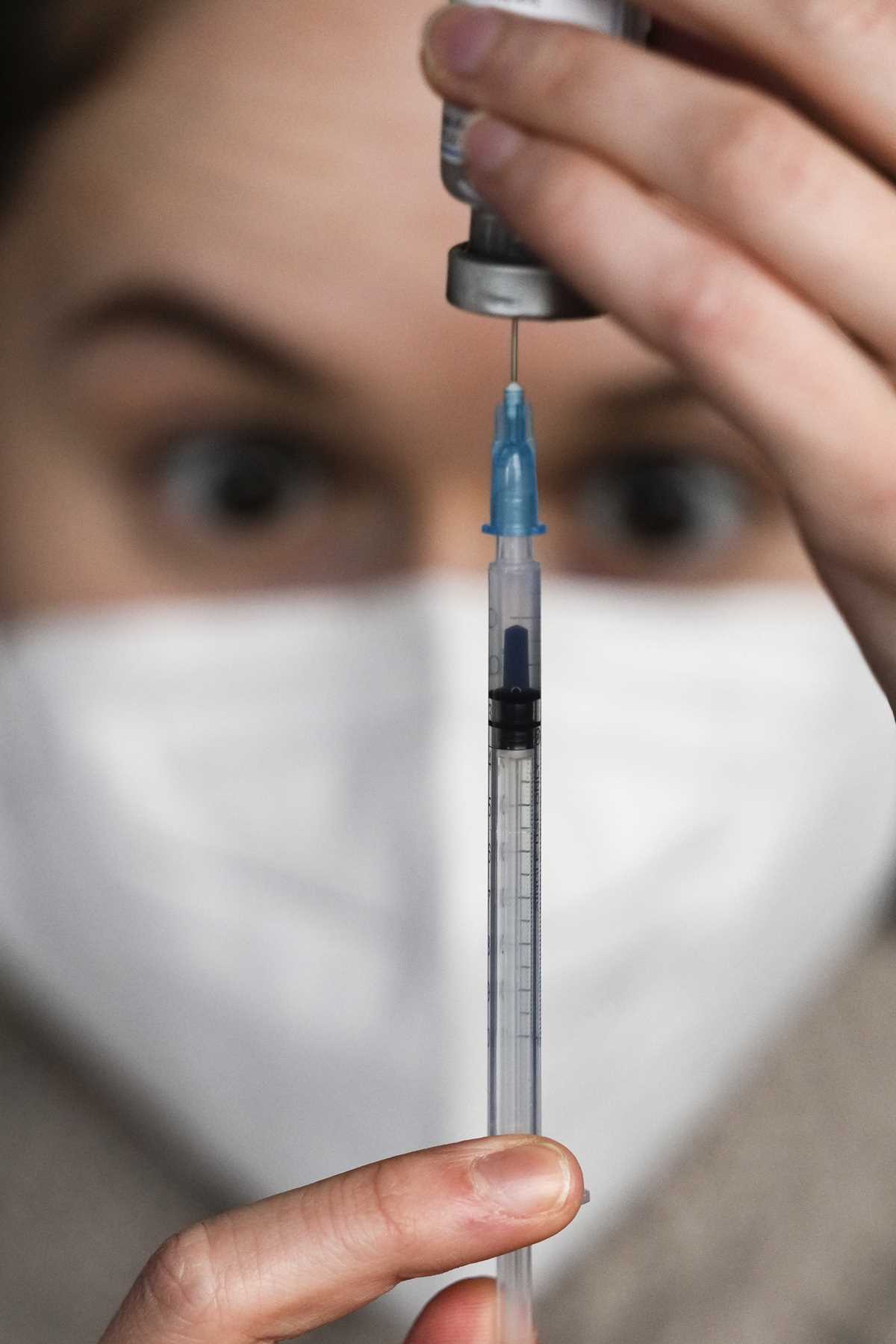 Medical staff prepares a syringe with vaccination against the coronavirus and the COVID-19 disease inside Klunkerkranich Restaurant and night club during an ongoing vaccination campaign of the Clubkommission in Berlin, Germany, Wednesday, Jan. 5, 2022. Germany’s parliament is set to hold its first debate Wednesday on a possible wide-ranging coronavirus vaccine mandate, with three options emerging: obligatory vaccinations for all adults or for everyone above 50, or no mandate at all. (AP Photo/Markus Schreiber, File) 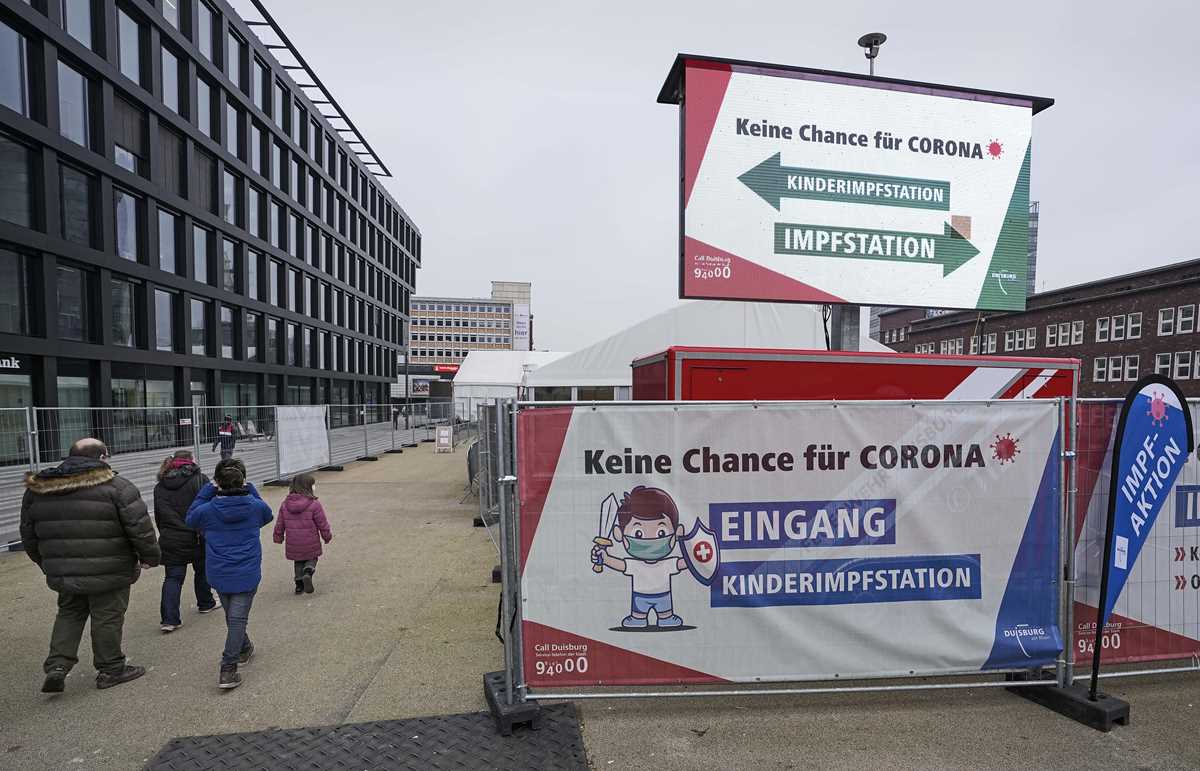 Families enter a coronavirus vaccination center for children in Duisburg, Germany, Tuesday, Jan. 25, 2022. Germany’s parliament is set to hold its first debate Wednesday on a possible wide-ranging coronavirus vaccine mandate, with three options emerging: obligatory vaccinations for all adults or for everyone above 50, or no mandate at all. (AP Photo/Martin Meissner) 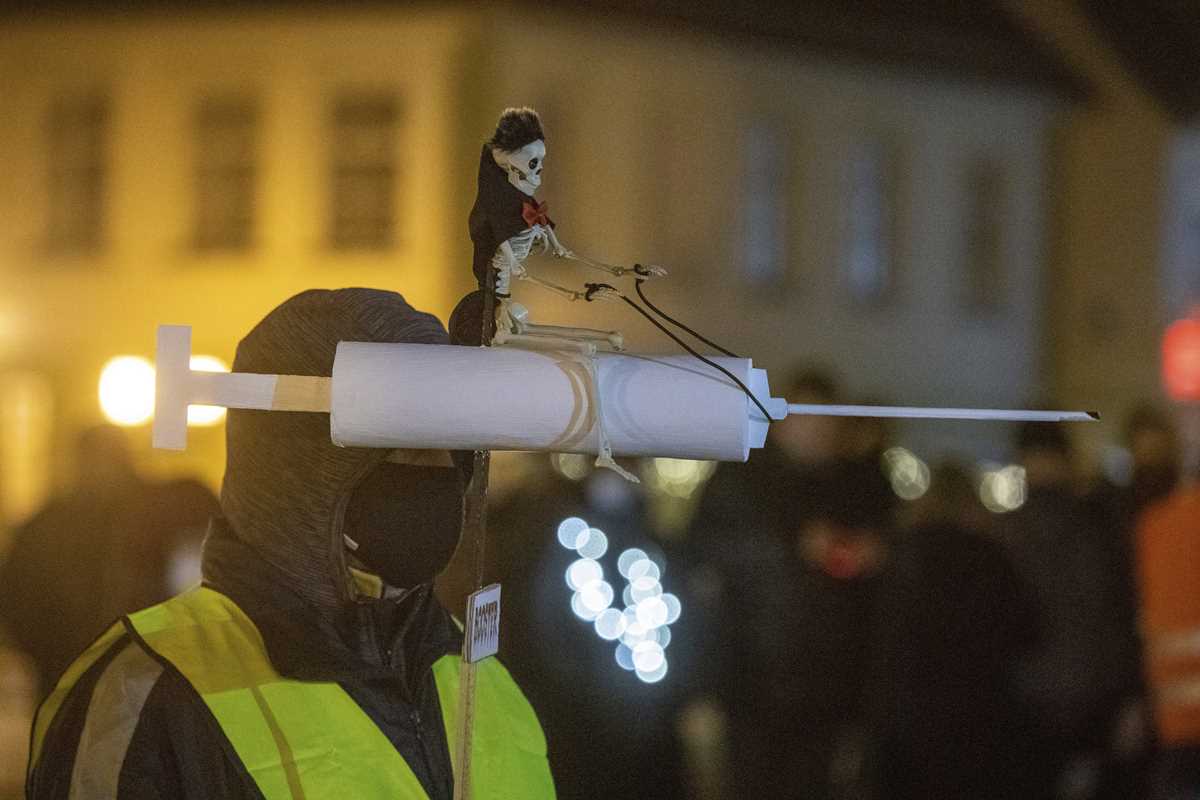 Participants of a demonstration against Corona measures and vaccination stand in the market in Greifswald, Germany, Monday, Jan. 24, 2022. Germany’s parliament is set to hold its first debate Wednesday on a possible wide-ranging coronavirus vaccine mandate, with three options emerging: obligatory vaccinations for all adults or for everyone above 50, or no mandate at all.(Stefan Sauer/dpa via AP) 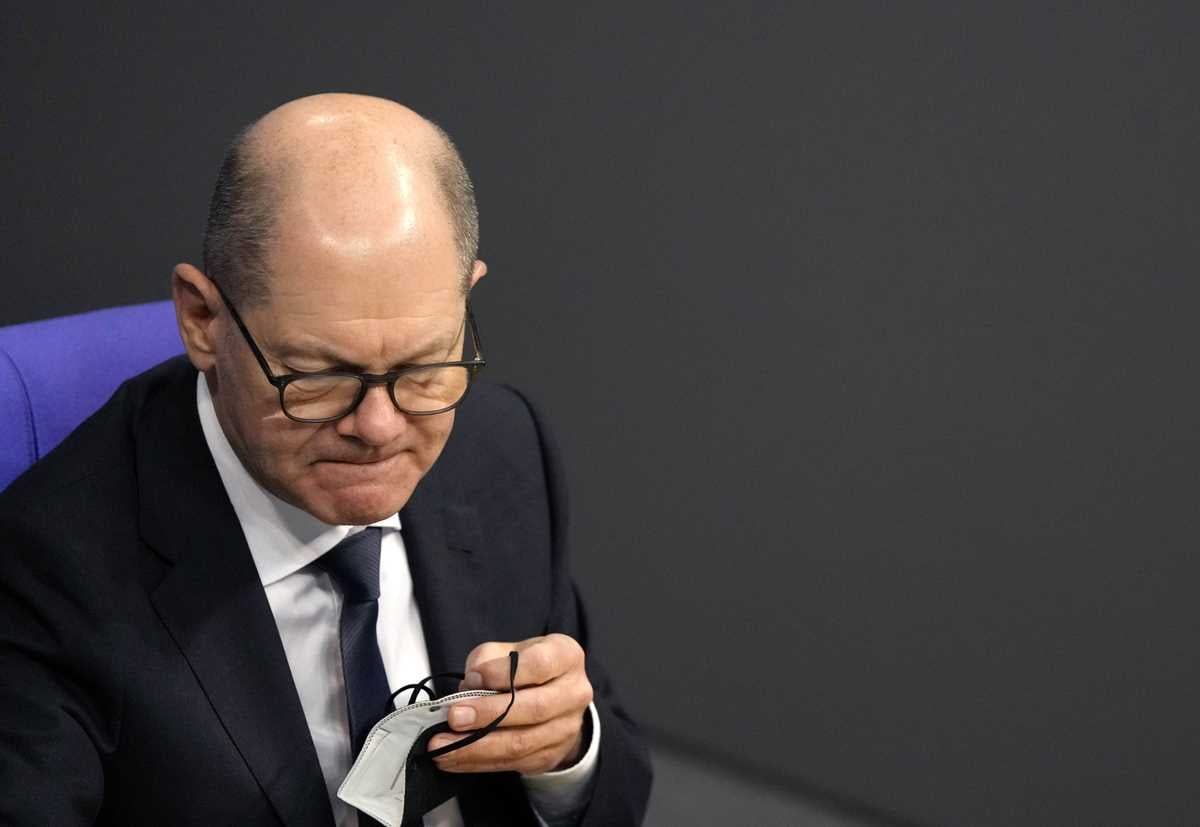 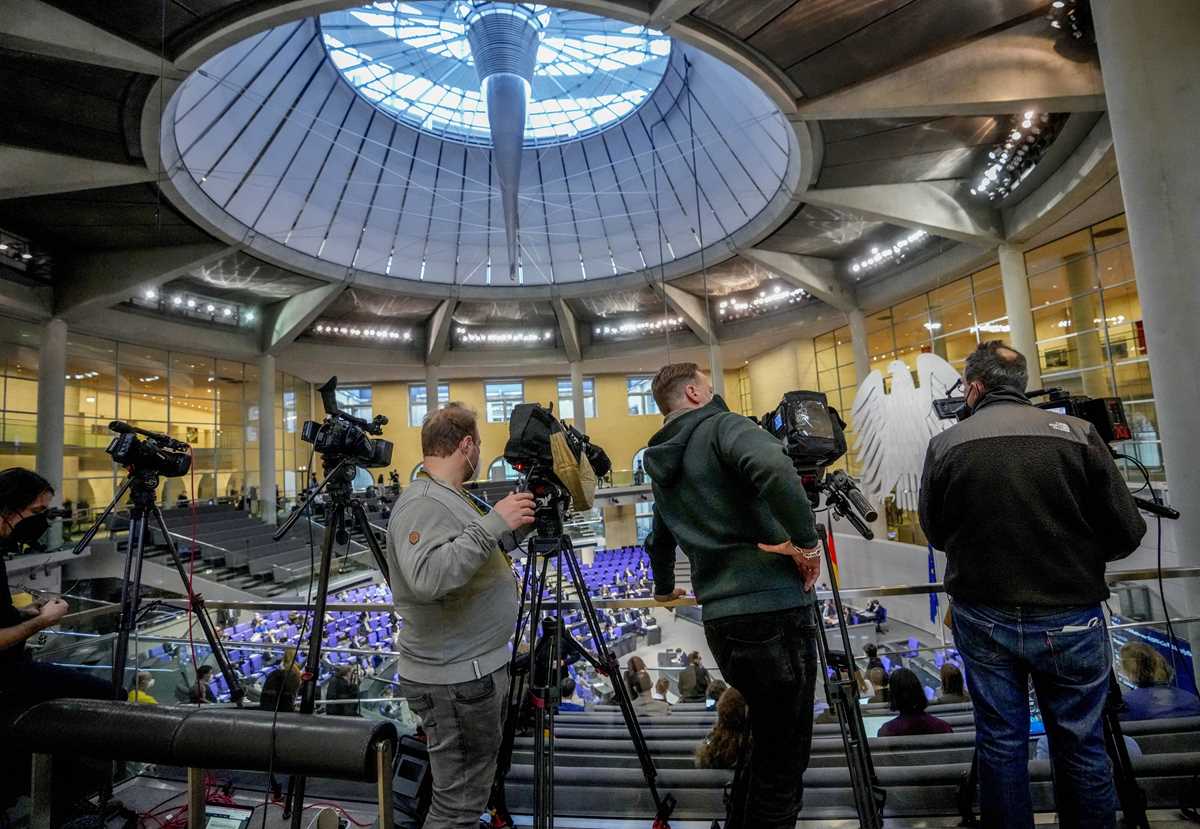 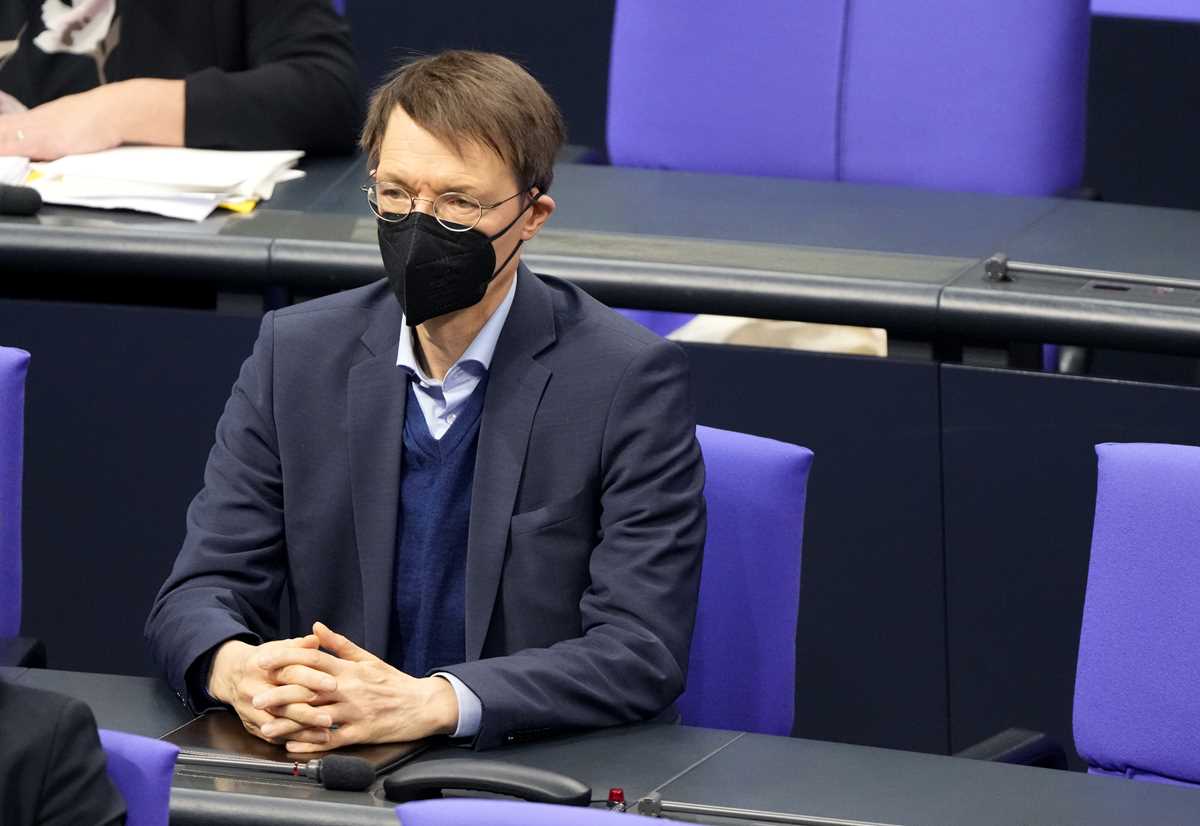 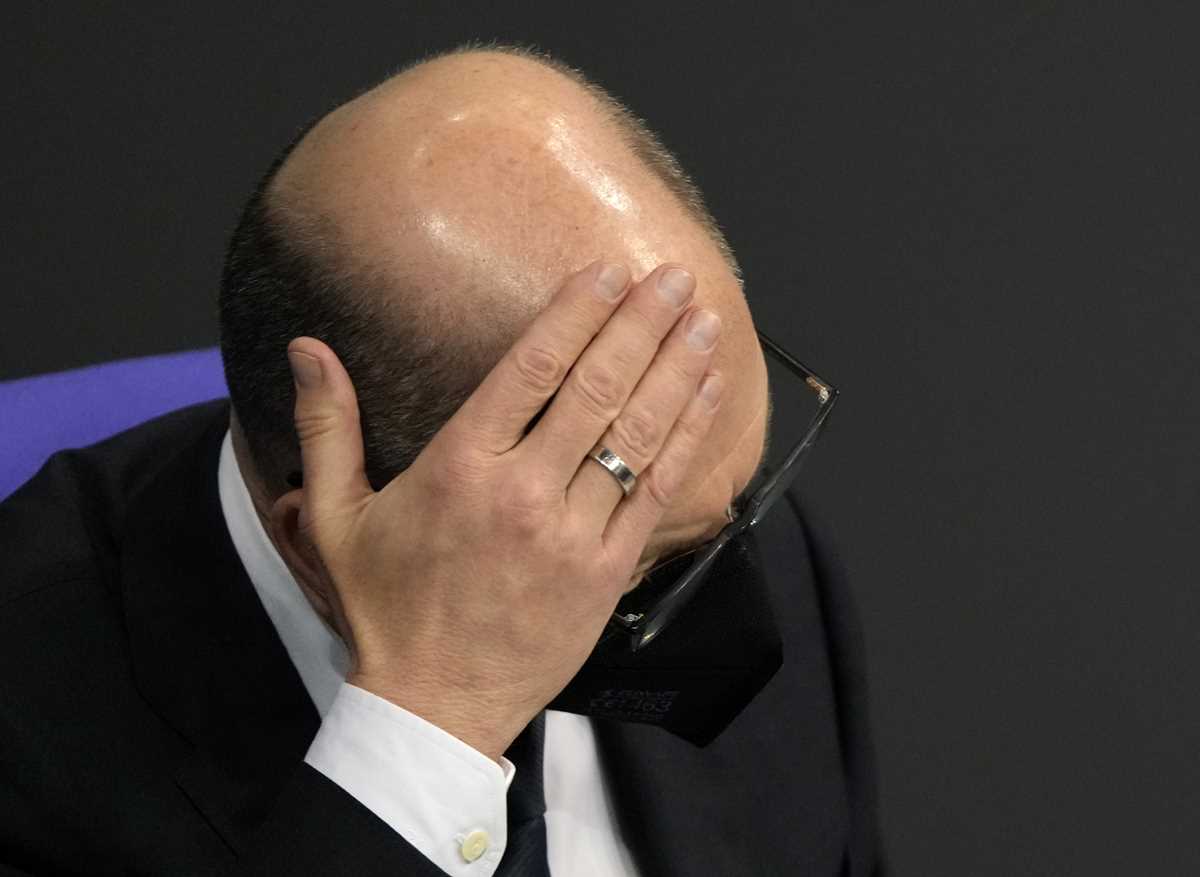 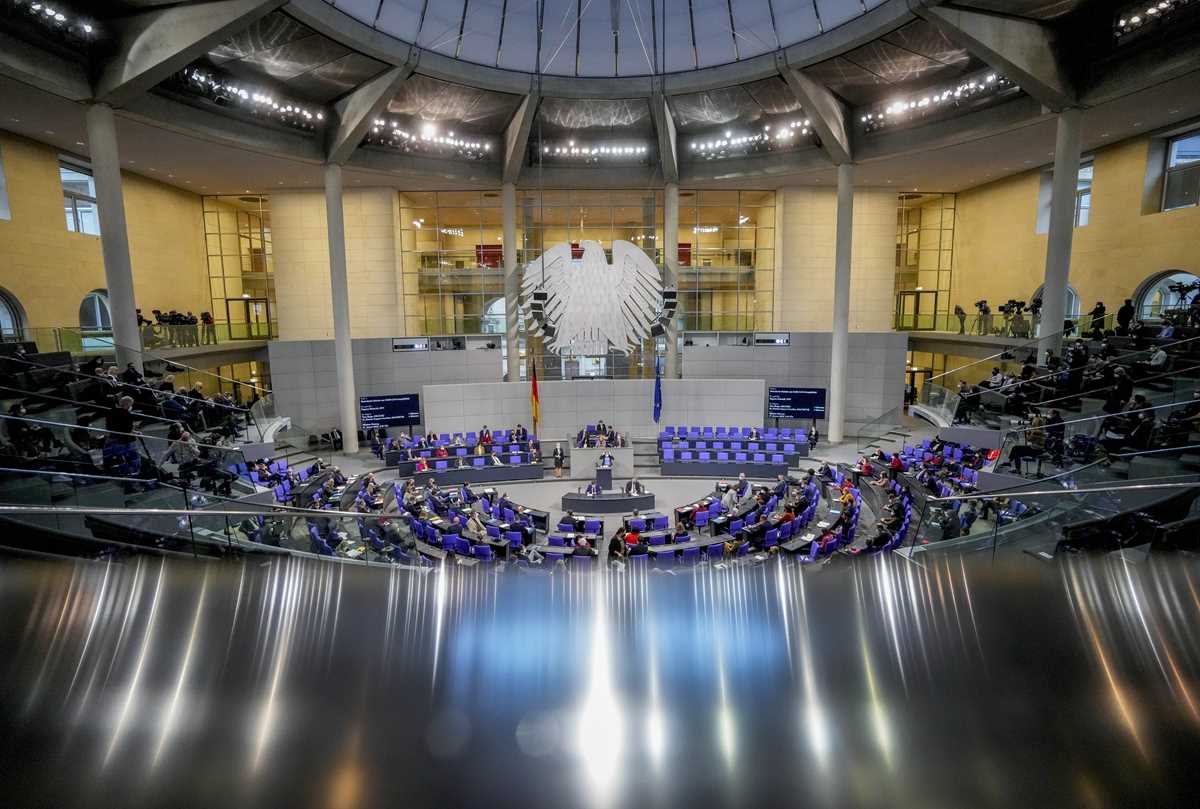 Lawmakers attend a debate about a vaccination mandate at the parliament Bundestag in Berlin, Germany, Wednesday, Jan. 26, 2022. (AP Photo/Markus Schreiber)

BERLIN (AP) — Germany’s parliament on Wednesday began a debate on a possible wide-ranging coronavirus vaccine mandate, with three main options on the table so far: obligatory vaccinations for all adults, just for everyone 50 and above, or no mandate at all.

German politicians of all stripes long insisted there would be no vaccine mandate. But the tide turned late last year amid frustration that a large number of holdouts was hampering the country’s fight against COVID-19.

Shortly before becoming chancellor in December, Olaf Scholz came out in favor of a vaccine mandate, predicting that it would take effect in February or early March.

That timetable has slipped. Scholz’s new coalition government is leaving it up to lawmakers to come up with cross-party vaccination proposals and then vote according to their conscience rather than along party lines.

That has been done before to tackle ethically complicated medical questions, most recently in 2020 to decide on rules for organ donors.

On Wednesday, lawmakers kicked off proceedings with an “orientation debate.” It isn’t clear when any legislation will go to a vote, but it appears that it could be well into the spring before any vaccine mandate law takes effect.

Three proposals have emerged so far from lawmakers in Scholz’s three-party governing coalition.

One is a call for a vaccine mandate for everyone 18 and above, which would be valid for two years and cover a maximum three shots, with fines for holdouts. A rival proposal calls for obligatory counseling meetings for the unvaccinated, followed by a vaccine mandate for people 50 and over if progress is unsatisfactory. And another group wants to prevent any vaccination mandate.

As of Wednesday, at least 73.6% of Germany’s population was fully vaccinated — higher than the European Union average of 70% but lower than in countries such as Spain and Portugal — and 51.3% also had received a booster. Officials aren’t satisfied with that vaccination level.

Germany is a long way from a very high vaccination rate “despite all our efforts, and so we need a general vaccine mandate for the way out of the pandemic,” Dagmar Schmidt, a senior lawmaker with Scholz’s center-left Social Democrats who backs the broadest proposal, told parliament.

Justice Minister Marco Buschmann didn’t back any specific proposal but pointed to high constitutional requirements for a universal mandate.

“We must take the milder alternative of an age-linked, staggered vaccination mandate very seriously,” he said, adding that ensuring quick and wide access to promising antiviral drugs might help relieve the pressure on intensive care units.

Green lawmaker Kirsten Kappert-Gonther questioned the sense of limiting a vaccination mandate to those 50 and over.

“There is severe illness among younger people as well, and long COVID is an additional risk,” she said. And “if we sent the signal that vaccination is important above all for the over-50s, that carries the risk of readiness to be vaccinated among younger people declining.”

Exactly how compliance would be checked is unclear. Germany lacks a central vaccination register.

The center-right Union bloc, the main opposition party, has insisted that the government should produce its own legislation and complained that Scholz has failed to provide leadership.

The Union’s health policy spokesman, Tino Sorge, said many questions remain unanswered and called for a “pragmatic approach.” He noted that the omicron variant, which is currently pushing infections to record levels, is milder and suggested that might raise questions over the need for “sweeping solutions.”

“There are good reasons for vaccination, but the reasons for a vaccine mandate don’t convince me,” said Wolfgang Kubicki, a senior lawmaker with Buschmann’s Free Democrats who opposes any mandate.

He said the German health system isn’t at risk of collapse and a mandate won’t help fight the current omicron wave, meaning there is no justifications for “a massive interference in fundamental rights.”

Scholz attended the debate but wasn’t scheduled to speak.

Last month, the German parliament approved legislation that will require staff at hospitals and nursing homes to show that they are fully vaccinated or have recovered from COVID-19 by mid-March.

Last week, neighboring Austria became the first European country to approve a vaccine mandate for all adults, which will become law on Feb. 1 and be enforced from mid-March.

Some other European countries have introduced mandates for specific professions or age groups. Greece has a mandate for those 60 and over, and Italy has one for people 50 and older.