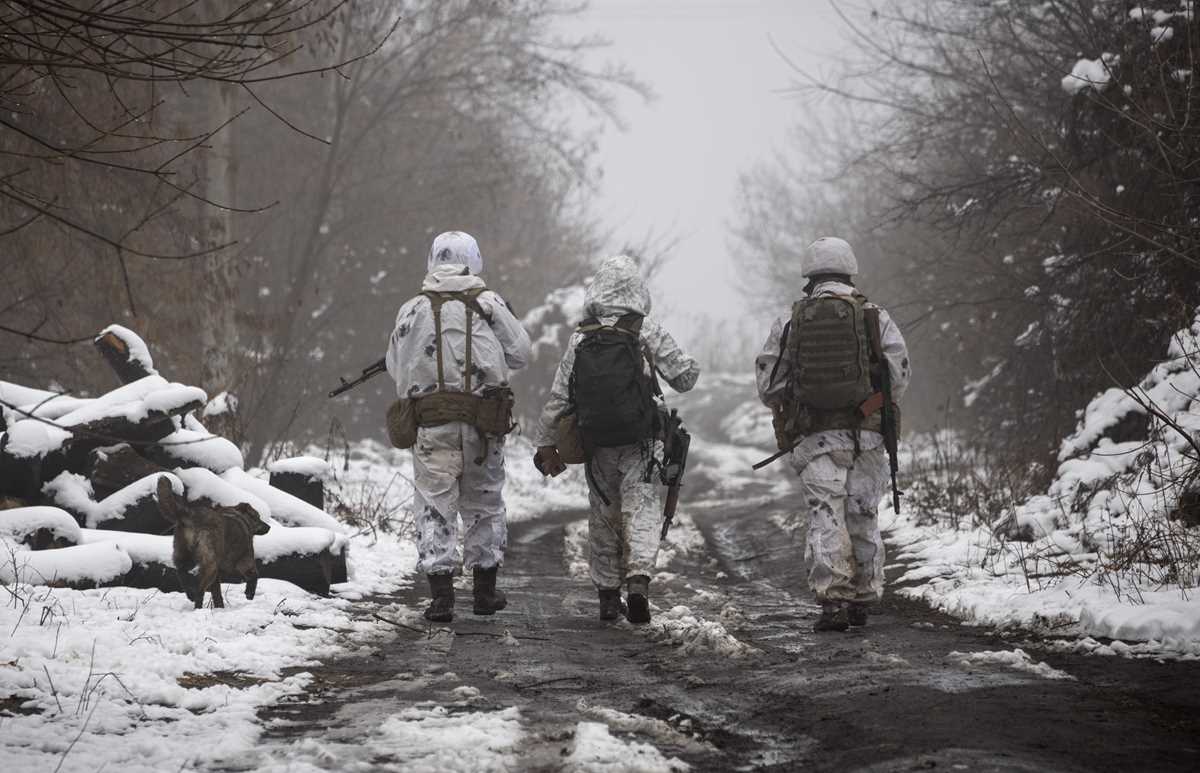 Ukrainian soldiers walks at the line of separation from pro-Russian rebels near Katerinivka, Donetsk region, Ukraine, Tuesday, Dec 7, 2021. Germany’s refusal to join other NATO members in supplying Ukraine with weapons has frustrated allies and prompted some to question Berlin’s resolve in standing up to Russia. (AP Photo/Andriy Dubchak) 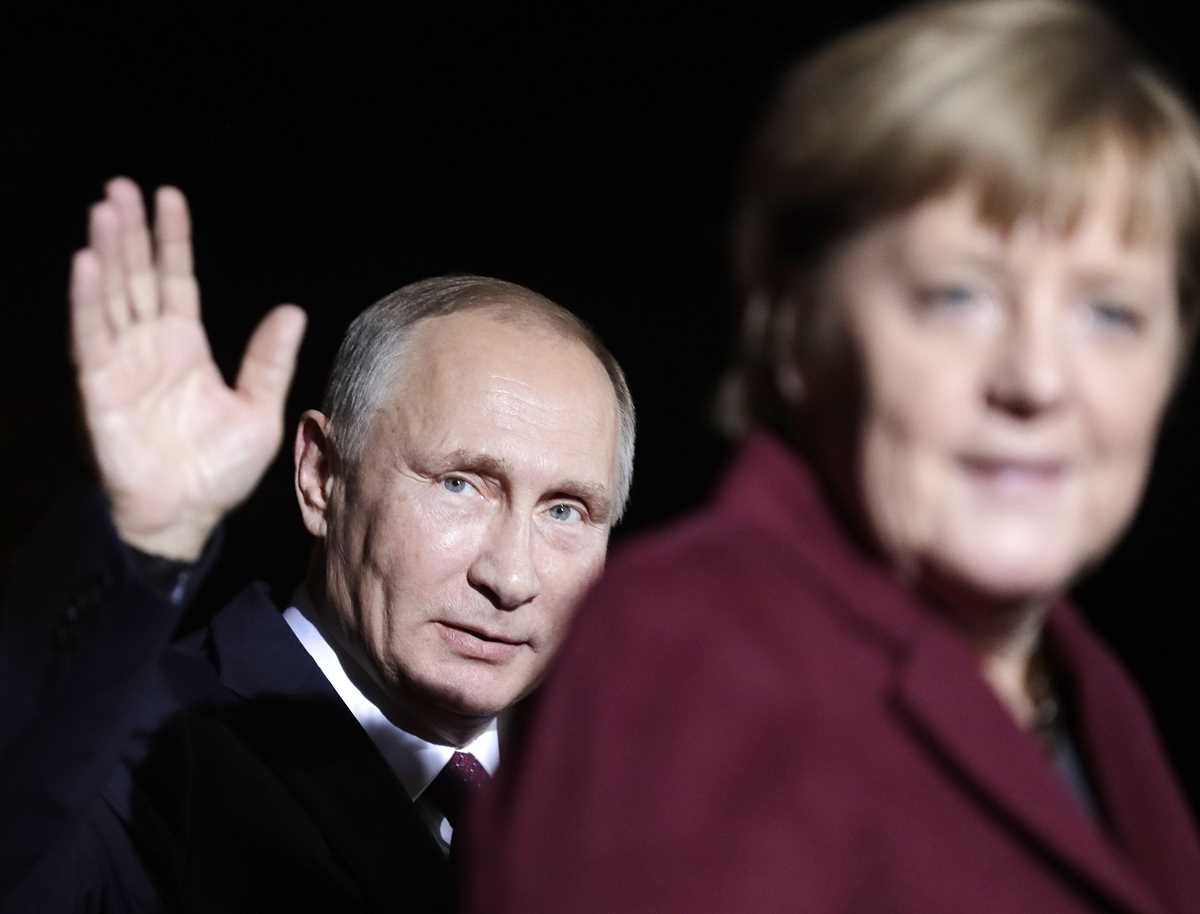 President of Russia Vladimir Putin waves after he meets this time German Chancellor Angela Merkel for a summit with the leaders of Russia, Ukraine and France at the chancellery in Berlin, Oct. 19, 2016. Germany’s refusal to join other NATO members in supplying Ukraine with weapons has frustrated allies and prompted some to question Berlin’s resolve in standing up to Russia. (AP Photo/Markus Schreiber, File) 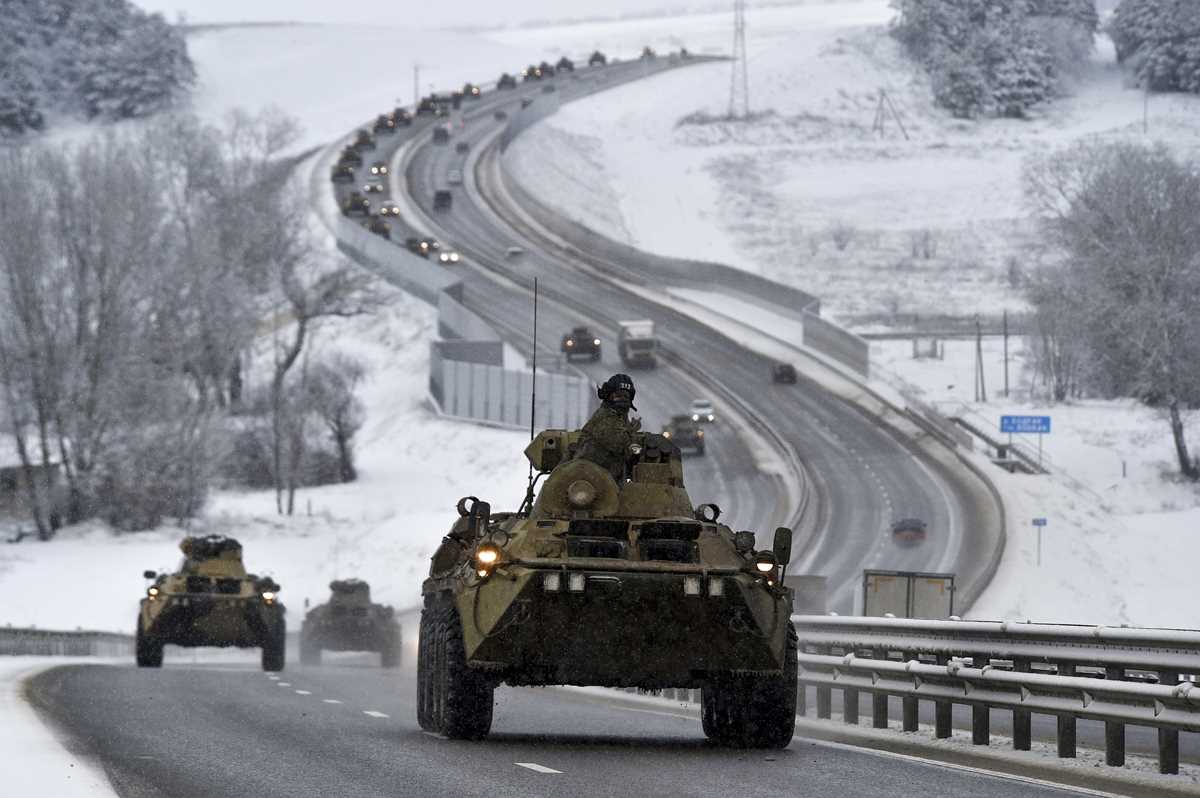 A convoy of Russian armored vehicles moves along a highway in Crimea, Tuesday, Jan. 18, 2022. Russia has concentrated an estimated 100,000 troops with tanks and other heavy weapons near Ukraine in what the West fears could be a prelude to an invasion. Germany’s refusal to join other NATO members in supplying Ukraine with weapons has frustrated allies and prompted some to question Berlin’s resolve in standing up to Russia. (AP Photo, File) 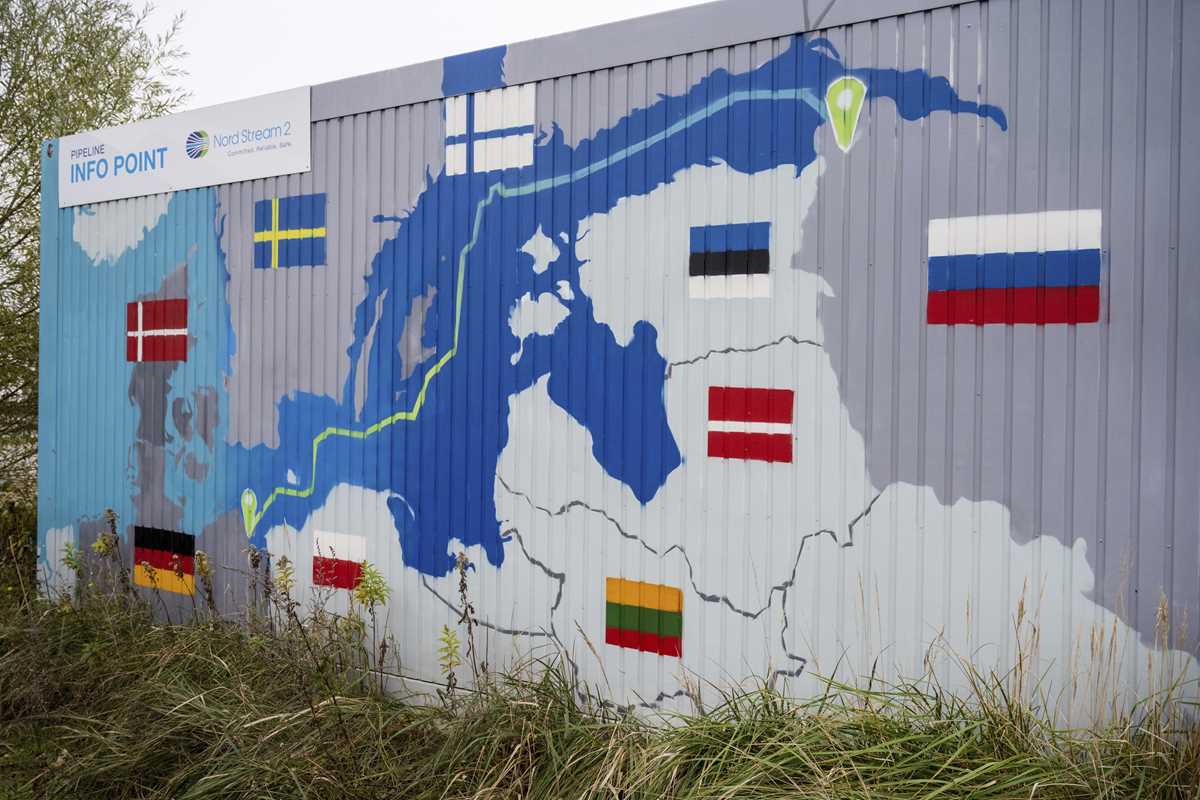 A sign reading “Nord Stream 2 Committed. Reliable. Safe.” hangs above a painted map of the Nord Stream 2 pipeline from Russia to Germany at the natural gas receiving station in the Lubmin industrial estate in Lubmin, Germany, Nov 16, 2021. Germany’s refusal to join other NATO members in supplying Ukraine with weapons has frustrated allies and prompted some to question Berlin’s resolve in standing up to Russia. (Stefan Sauer/dpa via AP)

BERLIN (AP) — Germany’s refusal to join other NATO members in providing weapons to Ukraine has annoyed some allies and raised questions about Berlin’s resolve in standing up to Russia.

The issue rose to the fore over the weekend following a report that Berlin had gone so far as to block Estonia from supplying old German howitzers to Kyiv to help defend itself against Russian troops massing near the Ukrainian border.

Germany’s stance on arms supplies does “not correspond to the level of our relations and the current security situation,” Ukrainian Foreign Minister Dmytro Kuleba said on Twitter.

Speaking to reporters Monday in Berlin, German Chancellor Olaf Scholz denied a decision had been made on the howitzers and insisted that his country stands with its NATO and European Union allies in opposing any Russian incursion into Ukraine.

“Should this situation occur, we will jointly act,” he told reporters. “There would be a high price.”

Still, while Germany would continue to provide help to Ukraine, there would be one exception, he said: “We don’t provide any lethal weapons.”

That stance, criticized in Kyiv and — less loudly — in Washington and London, has caused consternation among some in Germany who worry that their country may not be considered a reliable partner.

“How many in Berlin are actually aware how our seemingly confused Ukraine policy harms not just (Germany) but the entire EU?” asked Wolfgang Ischinger, Germany’s former ambassador to the United States and now head of the annual Munich Security Conference.

Experts say Germany’s position is partly rooted in its history of aggression during the 20th century.

“There’s the obvious legacy of Germany’s own militarization in Europe during two World Wars that has led many German leaders to view any military response as the last resort,” said Rachel Ellehuus, deputy director of the Europe, Russia and Eurasia program at the Washington-based Center for Strategic and International Studies.

That attitude could backfire, she said. “The current government does not seem to grasp that sending defensive weapons to Ukraine might actually deter further Russian aggression.”

And while Germany has pointed to its restrictive position on arms exports to conflict zones in the past, analysts say the rule has not been consistently applied.

“There have always been borderline cases here, such as the Kosovo war or support for the Kurds against IS in Syria,” said Sabine Fischer, a senior Russia expert at the German Institute for International and Security Affairs.

The debate over German weapons is unfolding days after the head of the German navy resigned following criticism at home and abroad for comments he made on Ukraine and Russia. Speaking Friday in India, Vice Admiral Kay-Achim Schoenbach said it was important to have Russia on the same side as the EU against China and suggested that Russian President Vladimir Putin deserved “respect.”

With Scholz’s Social Democrats are steeped in the legacy of Cold War rapprochement pursued by his predecessor Willy Brandt, his governing partner the Greens are rooted in a tradition of pacifism. That means two out of Germany’s three governing parties would balk at the idea of supplying arms to a non-NATO country in a conflict with Russia. But letting Estonia pass on the old Soviet-designed 122-mm D-30 howitzers to Ukraine might be an acceptable compromise.

“In recent weeks, more than 100,000 Russian troops with tanks and guns have gathered near Ukraine for no understandable reason. And it’s hard not to see that as a threat,” she said during a visit to Moscow.

Speaking alongside her Russian counterpart, Baerbock acknowledged the “suffering and destruction that we Germans brought upon the peoples of the Soviet Union” during the Nazi era, but warned that Germany was willing to consider tough steps if Russia acts against Ukraine.

This includes calling into question the future of the new Nord Stream 2 pipeline meant to bring natural gas from Russia to Germany.

Such a move against its biggest energy supplier would come at a high price for Germany, too.

With plans to switch off its last three nuclear power plants this year and phase out the use of coal by 2030, Germany’s reliance on gas will increase in the short term until enough renewable energy comes online, said Georg Zachmann, a senior fellow at the Bruegel economic think tank in Brussels.

Yet German officials believe that being a large customer of Russian gas can give it leverage, as Moscow won’t want to harm its reputation as a reliable supplier.

Germany’s neighbors, however, aren’t convinced that tactic will work.

“For almost three decades, Germany has been pushing for a more inclusive approach to Russia based on the Wandel durch Handel (change through trade) approach. But it didn’t change Russia,” said Slawomir Debski, director of the Polish Institute of International Affairs, a think tank in Warsaw.

But the bickering now among NATO and EU allies doesn’t help either, he said.

If Berlin wants to focus on putting economic pressure on Moscow while others provide military aid to Ukraine, such a ‘good cop, bad cop’ approach could work, said Debski, “provided there is part of an agreed allied strategy and agreement on the fundamental endgame.”

Speaking Monday at a meeting of EU foreign ministers in Brussels, Baerbock said the German government’s priority is to deescalate the situation over Ukraine, dampening allies’ calls for military support to Kyiv and swift new sanctions against Moscow.

“Berlin will have to deal with the criticism that is now coming from Ukraine, other European countries and Washington,” Fischer said. “At the same time, Germany remains an important player in the negotiations surrounding the Russian-Ukrainian conflict and, I predict, will continue to support sanctions and other measures in the future.”

Geir Moulson in Berlin contributed to this report.