General Motors GM delivered around 2.9 million vehicles in China in 2021 despite the global semiconductor supply chain disruption. The challenging environment could not deter premium models and new energy vehicles (NEVs) from sustaining robust growth momentum and posting strong performance across their brands. GM, with a focus to create a future of zero crashes, zero emissions and zero congestion, had an impressive sales performance across its brands in the country last year, with some of them making it to the top positions.

Here’s a sneak peek on the robust sales that GM brands witnessed in China:

Cadillac posted record sales of more than 230,000 units in 2021. Models like the XT6 three-row SUV and the CT5 luxury sedan saw significant surge in sales, and the latter went on to become the brand’s best-selling model in the country. Presales of the Cadillac LYRIQ all-electric luxury SUV, the first model from the Ultium platform, were strong after its launch in November.

With deliveries of more than 210,000 units, Baojun expanded its EV portfolio. The latest entry to its NEV family is the KiWi EV, a trendy four seater with a personalized appearance that is appealing to younger consumers.

Deliveries of Wuling topped 1.4 million units. The Hong Guang MINI EV cemented its position as the best-selling EV in China, with sales of 400,000 units. Wuling continued to bolster its reach in the passenger vehicle segment and the sales of its first SUV, the Asta, kicked off to a strong start in September.

In 2021, GM introduced its revolutionary Ultium platform, which has the power, range and flexibility to make almost every vehicle an EV, to expedite its move toward a zero-emissions future. Cadillac will lead the launch with its LYRIQ in the Chinese market, followed suit by Buick and Chevrolet. The first Ultium Center opened in Shanghai in October to assemble battery packs for locally built EVs.

GM has an intensive launch upcoming in 2022 in the country. More than 20 new and refreshed models will be introduced, with key focus on luxury and premium models as well as NEVs.

In another breakthrough development, bringing novelty to used-vehicle shopping, GM has recently introduced CarBravo, a new online used-vehicle marketplace. The virtual platform promises to offer the company’s as well as other automakers’ used-vehicle customers the access to an expansive inventory, an omnichannel shopping experience and exclusive ownership benefits. The site is expected to launch in spring.

As per the blueprint of the plan, CarBravo also boasts of a seamless customer experience through GM’s new digital retail platform (“DRP”). The DRP will provide a simple and transparent shopping interface featuring clear dealer pricing, vehicle history reports and 360-degree views of the vehicle. All vehicles under CarBravo will undergo inspection and will be reconditioned to meet standards set by the company. Customers can receive guaranteed online offers from the industry-standard Black Book to buy their vehicles even if they are not a purchaser of a vehicle through CarBravo.

CarBravo also comes with standard warranty coverage on all vehicles, an extensive dealerships network spanning globally, offering service and maintenance, and a variety of ownership benefits that include roadside service, and OnStar and SiriusXM trials on eligible vehicles throughout the ownership lifecycle.

The nearly 400,000 cars that are there with dealers in the inventory can now be sold through the website. Around 500,000 used cars are also available annually through GM and GM Financial.

Big automakers are facing pressure from digital retailers in recent times which have siphoned off sales with consumer preference for online buying. Used vehicles comprise of a significant part of GM’s business, with sales totaling nearly 70% and are vital to expand the GM’s customer pool. The announcement addresses the needs of the changing times.

GM’s shares have risen 28.5% over the past year outperforming the industry’s 3% rise. The company has an expected earnings growth rate of 1.1% for the current year 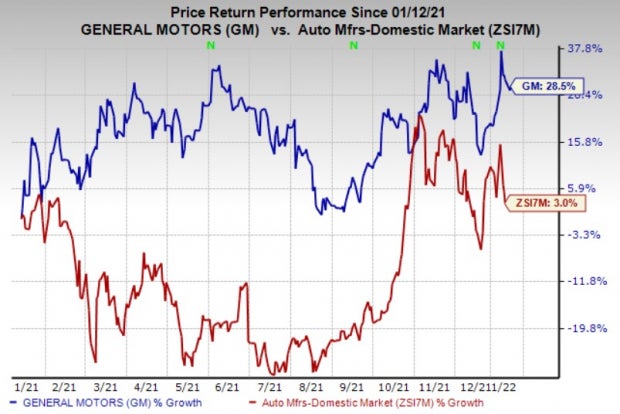 Genuine Parts’ earnings beat the Zacks Consensus Estimate in all the trailing four quarters. GPC pulled off a trailing four-quarter earnings surprise of 16%, on average. Its shares have gained 27% over a year.

Fox Factory’s bottom line beat the Zacks Consensus Estimate in all the trailing four quarters. FOXF delivered a trailing four-quarter earnings surprise of roughly 16%, on average. The stock has rallied 24.3% over a year.

Ford has an expected earnings growth rate of 2.2% for the current year. The Zacks Consensus Estimate for the current-year earnings has been revised around 2.7% upward over the past 60 days.

Ford’s earnings beat the Zacks Consensus Estimate in all of the trailing four quarters. F pulled off a trailing four-quarter earnings surprise of 335.6%, on average. The stock has also rallied 149% over a year.