Barring one-time items, adjusted earnings per share came in at 96 cents. The figure missed the Zacks Consensus Estimate of 97 cents.

Revenues rose roughly 37% year over year to $6,164 million. The figure also missed the Zacks Consensus Estimate of $6,226.8 million. The mining giant benefited from higher realized copper prices and sales and in the quarter.

Copper production rose around 20% year over year to 1,033 million pounds in the fourth quarter.

Consolidated sales from mines went up 18% year over year to 1,020 million pounds of copper, driven mainly by the ramp-up of underground mining at PT-FI and higher milling rates across North America and South America. The company sold 395,000 ounces of gold (up around 35%) and 19 million pounds (down roughly 10%) of molybdenum during the quarter.

Consolidated average unit net cash costs per pound of copper were $1.29, up about 0.8% year over year. The figure was higher than the company’s October 2021 estimate of $1.26 per pound, mainly due to nonrecurring labor-related charges at the Cerro Verde mine for collective labor agreements.

Cash flows provided by operations were $2.3 billion for the fourth quarter.

For 2022, Freeport anticipates consolidated sales volumes to be roughly 4.3 billion pounds of copper.

The company also expects gold sales volumes of 1.6 million ounces for 2022. It also expects sales of 80 million pounds of molybdenum for the year.

Freeport’s shares have rallied 53.7% in the past year compared with a 22% rise of the industry. 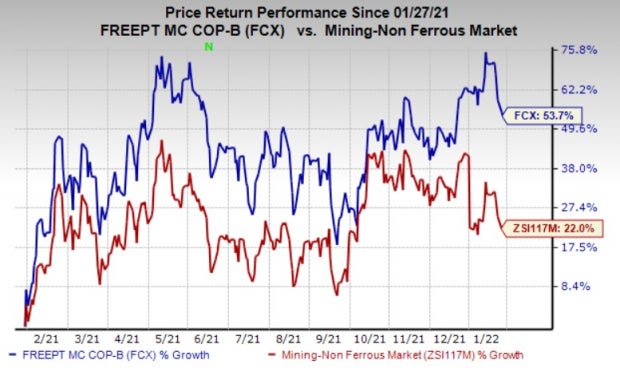 Commercial Metals, sporting a Zacks Rank #1 (Strong Buy), has a projected earnings growth rate of 62% for the current fiscal year. The Zacks Consensus Estimate for CMC’s current fiscal year earnings has been revised 39.5% upward over the past 60 days. You can see the complete list of today’s Zacks #1 Rank stocks here.

Commercial Metals beat the Zacks Consensus Estimate for earnings in three of the last four quarters while missed once. It has a trailing four-quarter earnings surprise of roughly 13.1%, on average. CMC has rallied around 67% in a year.

Albemarle beat the Zacks Consensus Estimate for earnings in each of the trailing four quarters, the average being 22.1%. ALB shares have gained around 22% in a year.

AdvanSix, carrying a Zacks Rank #1, has an expected earnings growth rate of 7.4% for the current year. The Zacks Consensus Estimate for ASIX’s current-year earnings has been revised 5.3% upward in the past 60 days.

AdvanSix beat the Zacks Consensus Estimate for earnings in each of the trailing four quarters, the average being 46.9%. ASIX has rallied around 84% in a year.

From thousands of stocks, 5 Zacks experts each have chosen their favorite to skyrocket +100% or more in months to come. From those 5, Director of Research Sheraz Mian hand-picks one to have the most explosive upside of all.

As one investor put it, “curing and preventing hundreds of diseases…what should that market be worth?” This company could rival or surpass other recent Zacks’ Stocks Set to Double like Boston Beer Company which shot up +143.0% in little more than 9 months and NVIDIA which boomed +175.9% in one year.