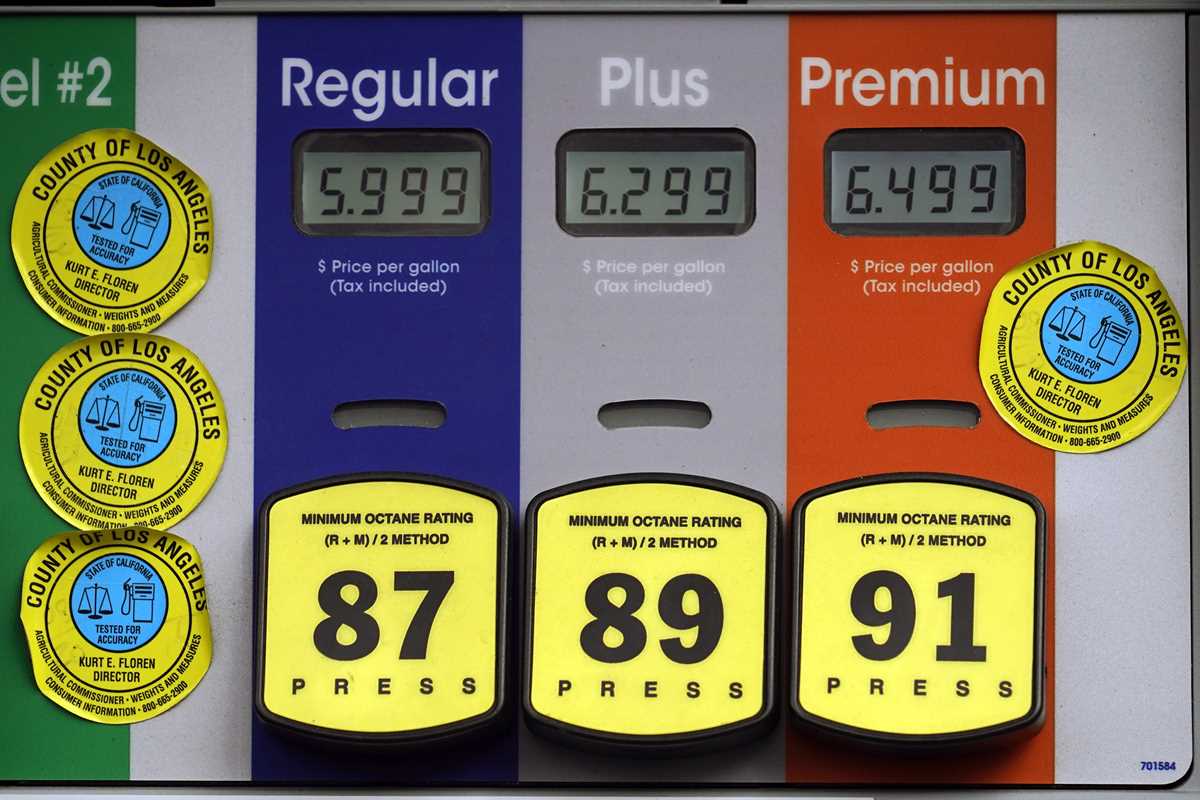 High gas prices are posted at a full service gas station in Beverly Hills, Calif., Nov. 7, 2021. Oil prices, which have a big impact on the price of gasoline and home heating oils, have been on an up-and-down ride since the fall. And while oil prices are usually pretty volatile, the constantly change nature of the coronavirus pandemic has made predicting the ups and downs even harder. (AP Photo/Damian Dovarganes)

NEW YORK (AP) — Anyone who’s bought food, paid rent or looked for a used car recently has come up against the billowing inflation that has engulfed the U.S. economy.

And, with surging oil prices keeping gasoline high, so has anyone who’s filled up a car.

Energy costs have been one of the main drivers of what’s become the highest inflation in a generation. In recent days, the price of a barrel of U.S. benchmark crude oil hit a seven-year high — $87 a barrel, a dizzying jump of about 36% since Dec. 1.

That price spike reversed a nearly equally steep plunge that began in late October. Because oil has a direct effect on the prices of gasoline and home heating oils, consumers have been battered by the wild volatility. For now, a gallon of regular gas is averaging $3.33, according to AAA, compared with $2.40 a year ago.

For one thing, the ever-evolving state of the viral pandemic has played havoc with both supply and demand. As a consequence, energy has been gripped by violent price swings.

“COVID has upended everything,” said Andrew Gross, spokesman for AAA. “It’s even made a lack of predictability even more unpredictable.”

Other factors, too, have kept energy prices high. And most analysts say they think prospects for any relief soon are dim. Most urgently, Russia’s buildup of a military presence along the Ukraine border has raised fears of an imminent invasion and a consequential impact on global energy supplies.

Russia supplies much oil and gas to the rest of the world — a supply that could be cut off if tensions escalate to the point of an invasion.

As it stands, Russia has deployed approximately 100,000 troops near Ukraine’s border and has demanded that NATO promise it will never allow Ukraine to join — a demand that Russia is unlikely to see fulfilled. On Sunday, the U.S. State Department ordered families of American personnel at the U.S. Embassy in Ukraine to leave the country.

Any Russian invasion into Ukraine would almost surely trigger economic sanctions form the U.S. and its European allies. That could lead to oil and gas shortages around the world and, most likely, higher energy prices.

Russia provides 30 to 40% of Europe’s oil, gas and coal, noted Kevin Book, managing director at Clearview Energy Partners. In any given year, he said, Russia’s exports supply 4% to 5% of the world’s energy.

“So what does the world do if you have a cutoff of some significant amount of that sort of 5%?” Book said. “Well, the price goes up everywhere.”

The pain of high gasoline prices has most hurt public-facing workers, a disproportionate number of whom are lower-income commuters who must travel to their workplaces. By contrast, office workers who have had the opportunity to work mostly or exclusively from home have endured less of the price impact.

A year ago at this time, the typical family was spending about $30 a week on gasoline. Now, for the same amount of fuel, they’re spending about $43 a week, according to the National Energy Assistance Directors Association. That’s a particularly heavy toll at a time when households are struggling with inflation in other areas of the economy and a child tax credit recently expired.

“Those who are front-line workers, have children who they need to drive to school, the dentist and other essential trips — they will bear the full burden of these increases,” said Mark Wolfe, executive director of the energy assistance association. “There’s not a lot of room to cut back.”

Home heating oils could also get more expensive. But Wolfe noted that many people have already filled their storage tanks with fuel for the winter, so the higher prices will have less of an effect on families than high gasoline prices will.

After oil and gas prices spiked in the fall, people had good reason to hope that prices would come down. President Joe Biden took action in November to try to suppress rising energy prices by announcing that the U.S. and other nations would release oil from their strategic petroleum reserves. Prices fell in anticipation of the announcement. Ultimately, though, the move wasn’t enough to stop the upward climb in prices.

Then the omicron variant of the coronavirus started hammering cities hard around the globe. People expected oil prices to fall because typically, when a virus surge overtakes a community, people do less traveling and there’s less demand for fuel. Traffic did in fact decline in many parts of the world by 8 or 9%, said Claudio Galimberti, senior vice president at Rystad Energy.

“The market appears to have overlooked these important details,” he said.

And even with those traffic declines, there’s still not enough oil to go around. Some nations that are part of the OPEC+ oil cartel are producing less oil than they promised during recent negotiations. And many U.S. companies slowed production of oil at the start of the pandemic and haven’t returned to previous levels of production.

WHEN WILL IT END?

No one knows for sure.

The cold winter months we’re shivering through aren’t typically high time for drivers to hit the road. And as the weather warms up, there’s typically more demand for fuel, which usually raises prices. So the simple passage of time won’t necessarily solve the problem.

“With more people hitting the roads, it’s probably going to keep going this way for a while,” said Andrew Gross, spokesman for AAA.

It’s unclear what, if anything, the federal government can do to help. Biden’s decision to sell oil from the strategic petroleum reserve made little lasting impact.

In some markets, energy providers started burning oil to generate electricity instead of using expensive natural gas, which drained oil supplies further and also contributed to the price surge. The U.S. has accelerated its exports of LNG to Asia and Europe, and energy analysts expect that to continue.

The biggest unknown variable is whether Russia goes ahead and takes military action against Ukraine and how the U.S. and its European allies would then respond.

“We don’t know exactly what they’re going to do,” Book said. “But one thing is pretty clear: The European energy sector is very much at risk, even without all our sanctions.”