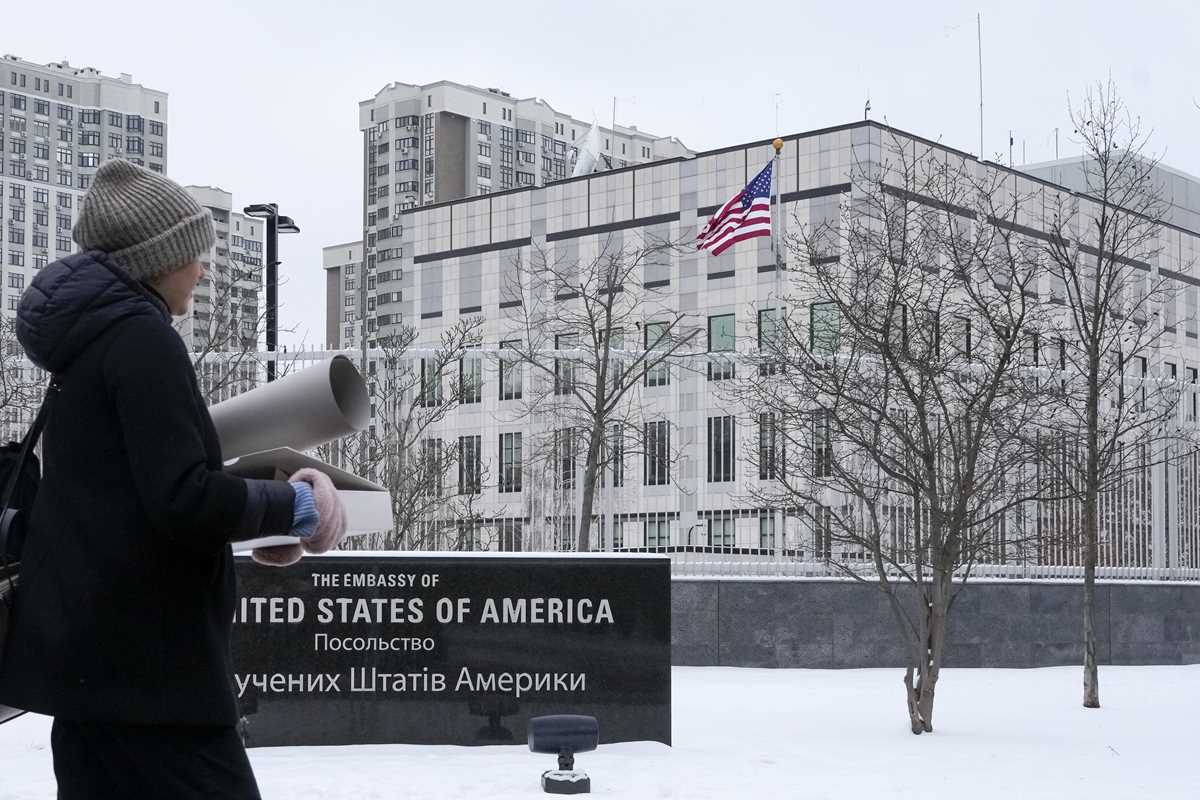 Pentagon spokesman John Kirby speaks during a briefing at the Pentagon in Washington, Monday, Jan. 24, 2022. The Pentagon says that Defense Secretary Lloyd Austin has put about 8,500 troops on heightened alert, so they will be prepared to deploy if needed to reassure NATO allies in the face of ongoing Russian aggression on the border of Ukraine. (AP Photo/Manuel Balce Ceneta) 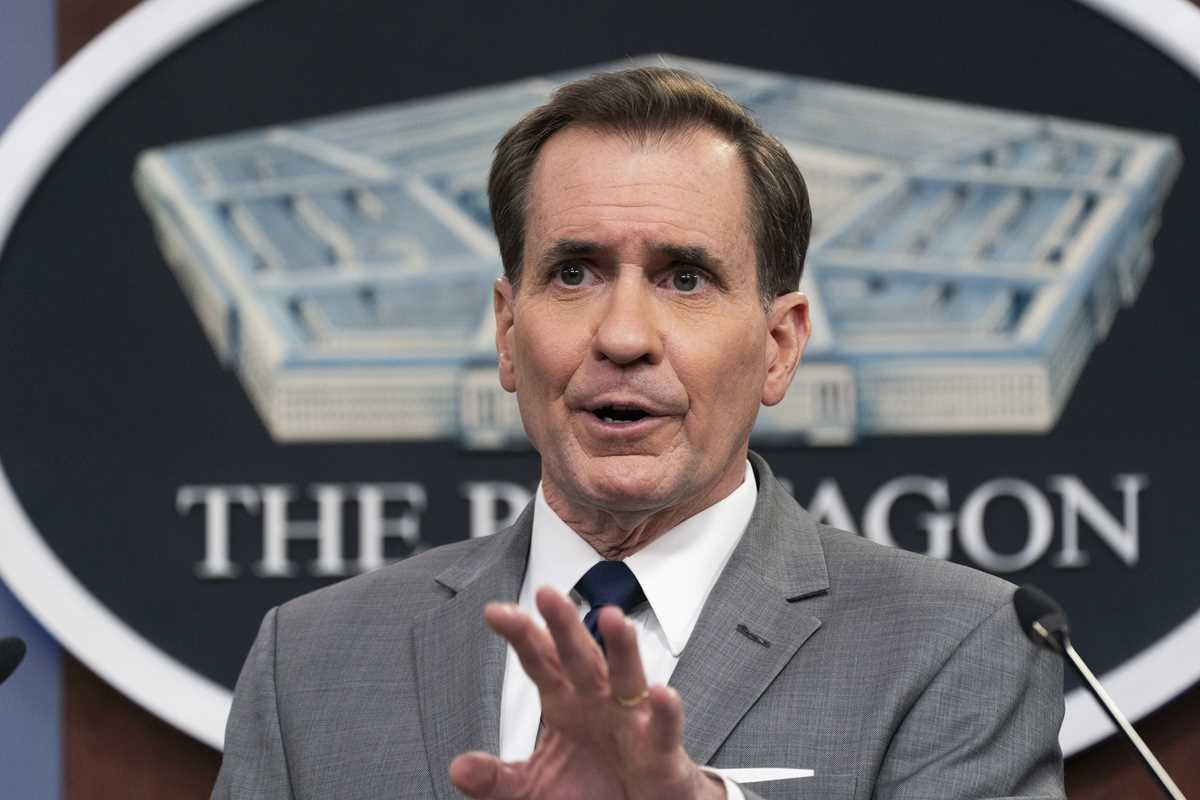 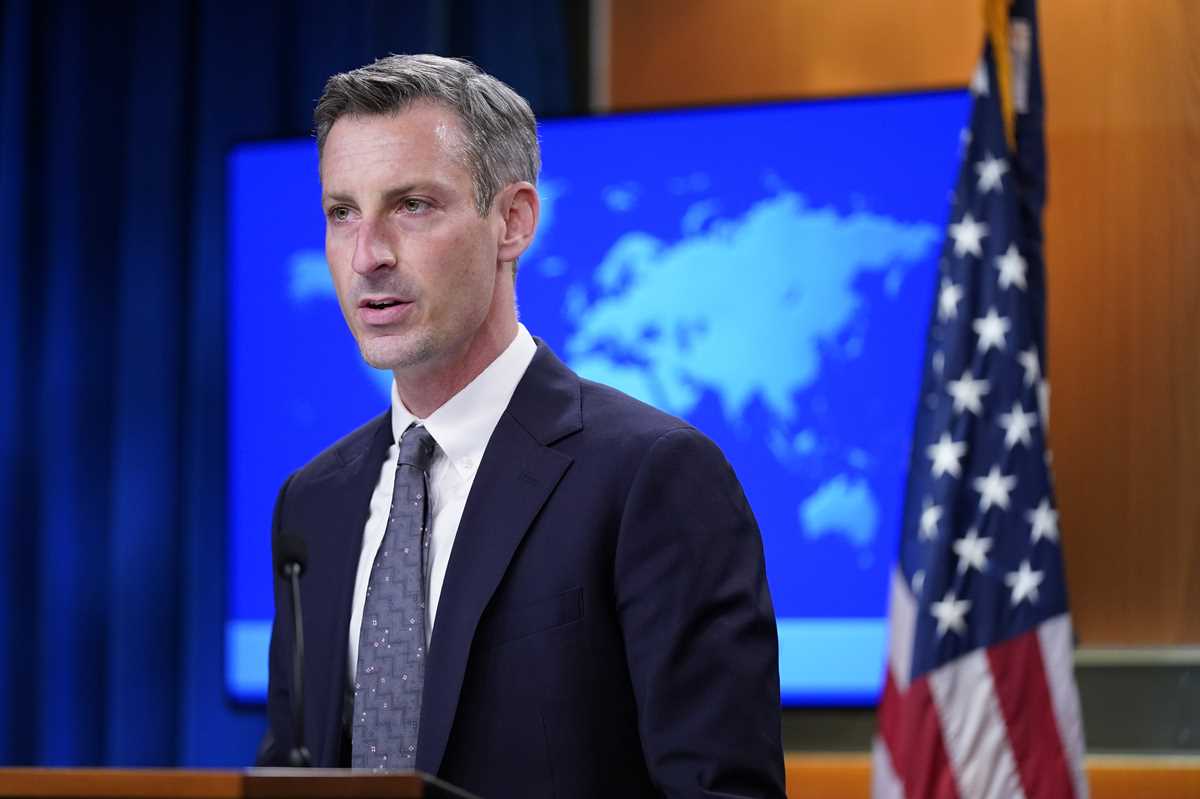 A woman walks past the U.S. Embassy in Kyiv, Ukraine, Monday, Jan. 24, 2022. The State Department is ordering the families of all American personnel at the U.S. Embassy in Kyiv to leave the country and allowing non-essential staff to leave Ukraine. The move comes amid heightened fears of a Russian invasion of Ukraine despite talks between U.S. and Russian officials. (AP Photo/Efrem Lukatsky)

WASHINGTON (AP) — The financial options being considered to punish President Vladimir Putin if Russia invades Ukraine range from the sweeping to the acutely personal — from cutting Russia off from U.S. dollars and international banking to slapping sanctions on a former Olympic gymnast reported to be Putin’s girlfriend.

Publicly, the United States and European allies have promised to hit Russia financially like never before if Putin does roll his military into Ukraine. Leaders have given few hard details to the public, however, arguing it’s best to keep Putin himself guessing.

And weeks into the negotiations, it’s far from clear that Americans have succeeded in achieving U.S. and European consensus on what sanctions will be imposed, and what would trigger them.

A look at some of the financial actions under consideration:

For the U.S. and its European allies, cutting Russia out of the SWIFT financial system, which shuffles money from bank to bank around the globe, would be one of the toughest financial steps they could take, damaging Russia’s economy immediately and in the long term. The move could cut Russia off from most international financial transactions, including international profits from oil and gas production, which in all accounts for more than 40% of the country’s revenue.

Allies on both sides of the Atlantic also considered the SWIFT option in 2014, when Russia invaded and annexed Ukraine’s Crimea and backed separatist forces in eastern Ukraine. Russia declared then that kicking it out of SWIFT would be equivalent to a declaration of war. The allies — criticized ever after for responding too weakly to Russia’s 2014 aggression — shelved the idea.

Russia since then has tried to develop its own financial transfer system, with limited success.

The U.S. has succeeded before in persuading the SWIFT system to kick out a country — Iran, over its nuclear program.

But kicking Russia out of SWIFT would also hurt other economies, including those of the U.S. and key ally Germany. U.S. lawmakers said last week the Biden administration is still analyzing how bad that impact would be. Annalena Baerbock, the foreign minister for Germany, asked by reporters about the proposed Russian SWIFT ban, seemed to express doubts.

“The toughest stick won’t always ultimately be the most intelligent sword,” Baerbock said.

The United States already holds one of the most powerful financial weapons to wield against Putin if he invades Ukraine — blocking Russia from access to the U.S. dollar.

Dollars still dominate in financial transactions around the world, with trillions of dollars in play daily.

Transactions in U.S. dollars ultimately are cleared through the Federal Reserve or through U.S. financial institutions. Crucially for Putin, that means foreign banks have to be able to access to the U.S. financial system to settle dollar transactions.

The ability to block that access gives the United States the ability to inflict financial pain well beyond its borders. Previously, the U.S. has suspended financial institutions from dollar clearing for allegedly violating sanctions against Iran, Sudan and other countries.

Biden indicated to reporters that cutting off Russia’s and Russians’ ability to deal in dollars was one of the options the U.S. was studying. Unlike the SWIFT option and the other financial measures, it’s one the U.S. could do on its own. Many Russians and Russian companies would be stymied in carrying out even the most routine transactions, like making payroll or buying things, because they would have no access to the U.S. banking system.

White House press secretary Jen Psaki has confirmed that the U.S. is considering imposing export controls — potentially cutting off Russia from the high tech that helps warplanes and passenger jets fly and makes smartphones smart, along with the other software and advanced electronic gear that make the modern world run.

That could include adding Russia to the most restrictive group of countries for export control purposes, together with Cuba, Iran, North Korea and Syria, officials said.

That would mean that Russia’s ability to obtain integrated circuits, and products containing integrated circuits, would be severely restricted, because of the global dominance of U.S. software, technology and equipment. The impact could extend to aircraft avionics, machine tools, smartphones, game consoles, tablets and televisions.

Such sanctions could also target critical Russian industry, including its defense and civil aviation sectors, which would hit Russia’s high-tech ambitions, whether in artificial intelligence or quantum computing.

Like some of the other penalties under consideration, U.S. export restrictions would risk motivating businesses to look for alternatives in other countries, including China.

The Biden administration limited Russia’s ability to borrow money by banning U.S. financial institutions from buying Russian government bonds directly from state institutions last year. But the sanctions didn’t target the secondary market, leaving this as a possible next step.

Republicans and Democrats in the Congress fought Russia’s new Nord Stream 2 natural gas pipeline to Germany for years, arguing it would help Russia use its control of the gas supply as leverage to achieve its policy aims in Europe. Rival bills in Congress would sanction the pipeline’s operators — Republicans want to impose the sanctions right away, but Democrats only if Russia invades Ukraine.

The Biden administration previously has held off from that level of sanctions, to avoid getting crossways with ally Germany.

German officials say blocking operation of the pipeline if Russia moves in to Ukraine would be “on the table” if there’s an invasion — but that’s as far as they’ve gone publicly.

GOING AFTER THE OLIGARCHS … AND A REPORTED GIRLFRIEND

One of the most-used sanctions tactics by the U.S. is sanctioning the immediate circles of leaders, their families, and military and civilian circles. Putin and his friends and family could face that as well, along with Russia’s powerful business oligarchs, and its banks.

Sweeping legislation by Indiana Republican Rep. Jim Banks, co-sponsored by nearly 40 other House Republicans, would pile on sanctions even before any further Russian invasion of Ukraine, from the SWIFT cutoff to the Nord Stream penalties.

They also would urge consideration of targeting many in Russia’s upper echelon with sanctions.

That includes Putin’s family and a woman reported to be Putin’s romantic interest, Alina Kabaeva, who won Olympic gold in 2004 as a gymnast.