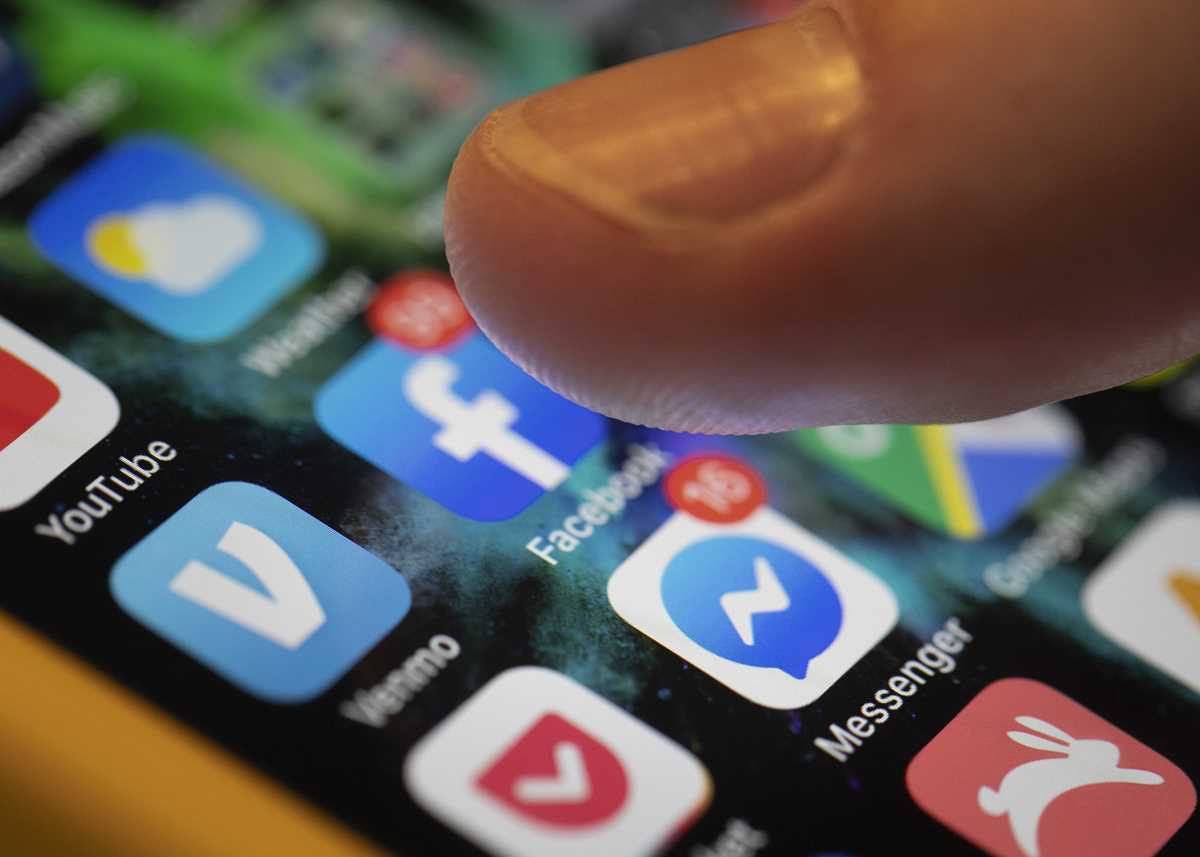 An iPhone displays the apps for Facebook and Messenger in New Orleans, Aug. 11, 2019. Online companies would have to ramp up efforts to keep harmful content off their platforms and take other steps to protect users under rules that European Union lawmakers are set to vote on Thursday Jan. 20, 2022. (AP Photo/Jenny Kane, File) 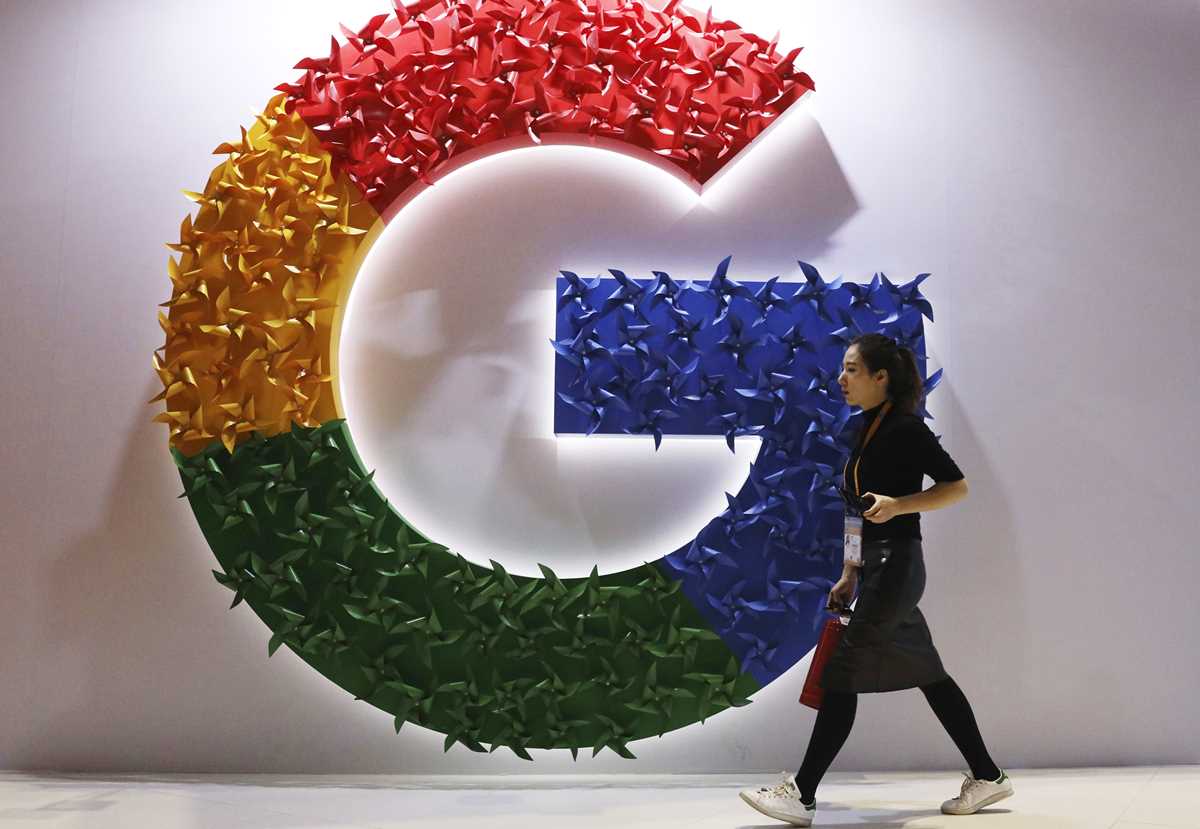 A woman walks past the logo for Google at the China International Import Expo in Shanghai, Nov. 5, 2018. Online companies would have to ramp up efforts to keep harmful content off their platforms and take other steps to protect users under rules that European Union lawmakers are set to vote on Thursday Jan. 20, 2022. (AP Photo/Ng Han Guan, File)

LONDON (AP) — Online companies would have to ramp up efforts to keep harmful content off their platforms and take other steps to protect users under rules that European Union lawmakers are set to vote on Thursday.

The 27-nation bloc has gained a reputation as a trendsetter in the growing global push to rein in big tech companies as they face withering criticism over misinformation, hate speech and other harmful content on their platforms.

Here’s a look at the proposed EU rules, known as the Digital Services Act, and why they would make an impact:

WHAT IS THE DIGITAL SERVICES ACT?

The legislation is part of a sweeping overhaul of the European Union’s digital rules aimed at ensuring online companies, including tech giants like Google and Facebook parent Meta, protect users on their platforms and treat rivals fairly. It’s an update of the EU’s two-decade-old e-commerce directive.

“The Digital Services Act could now become the new gold standard for digital regulation, not just in Europe but around the world,” the lead EU lawmaker on the bill, Christel Schaldemose, said during a debate Wednesday. “Big tech nations like the U.S. or China are watching closely to see what we’re now going to agree.”

The proposals are one-half of flagship digital regulations drafted by the bloc. EU lawmakers are also working on a separate proposal, the Digital Markets Act, which is aimed at reining in the power of the biggest online “gatekeepers.” Both still face further negotiations with EU bodies before taking effect.

WHAT WILL IT COVER?

The Digital Services Act includes a raft of measures aimed at better protecting internet users and their “fundamental rights online.” Tech companies will be held more responsible for content on their platforms, with requirements to beef up flagging and removal of illegal content like hate speech or dodgy goods and services sold online like counterfeit sneakers or unsafe toys.

But lawmakers have been battling about the details of such takedowns, including whether court orders would be required.

Online platforms will have to be more transparent about their algorithms that recommend the next video to watch, product to buy or news item at the top of people’s social media feeds. So-called recommender systems have been criticized for leading people to more increasingly extreme or polarizing content.

Some amendments to the legislation proposed giving users the option of turning recommendations off or using third-party systems.

ARE THERE ANY CONTROVERSIAL POINTS?

One of the legislation’s biggest battles is over surveillance-based advertising, also known as targeted or behavioral advertising. Such ads would be banned for children, but digital and consumer rights groups say the proposals don’t go far enough and have called for prohibiting them outright. That idea has faced fierce resistance from the digital ad industry dominated by Google and Meta.

Surveillance ads track online behavior, such as the websites visited or products bought online by a user, to serve them more digital ads based on those interests.

Groups such as Amnesty International say ad tracking undermines the rights that the legislation is supposed to protect, because it involves a massive invasion of privacy and indiscriminate data harvesting as part of a system that manipulates users and encourages ad fraud.

WHAT HAPPENS TO OFFENDERS?

The EU’s single market commissioner, Thierry Breton, took to Twitter on Wednesday to portray the proposed rules as the start of a new era for tough online enforcement.

“It’s time to put some order in the digital ‘Wild West,'” he said. “A new sheriff is in town — and it goes by the name #DSA,” he said, posting a mashup of video clips from a Clint Eastwood spaghetti Western film.

Under the Digital Services Act, violations could be punished with hefty fines of up to 6% of a company’s annual revenue. Some amendments have pushed for raising that amount.

See all of AP’s tech coverage at https://apnews.com/hub/technology.