EUR/USD attempts to retrace the decline from the start of the week as it snaps the recent series of lower highs and lows, and the exchange rate may stage a larger rebound over the coming days as it appears to be reversing course ahead of the monthly low (1.1272).

EUR/USD halts a three-day selloff as it bounces back from the 50-Day SMA (1.1321), and it remains to be seen if the account of the European Central Bank’s (ECB) December meeting will influence the exchange rate as the Governing Council plans to “discontinue net asset purchases under the PEPP (Pandemic Emergency Purchase Programme) at the end of March 2022.”

The transcript may generate a bullish reaction in the Euro as the ECB insists that “the future roll-off of the PEPP portfolio will be managed to avoid interference with the appropriate monetary policy stance,” and indications of a more detailed exit strategy may keep EUR/USD within the monthly range as market participants brace for a change in regime.

However, the ECB may keep the door open to further support the Euro Area as President Christine Lagarde and Co. emphasize that “net purchases under the PEPP could also be resumed, if necessary, to counter negative shocks related to the pandemic,” and more of the same from the Governing Council may drag on EUR/USD as the central bank appears to be in no rush to normalize monetary policy.

In turn, the deviating paths between the ECB and Federal Reserve may produce headwinds for EUR/USD as Chairman Jerome Powell and Co. look to implement higher interest rates in 2022, and a further decline in the exchange rate may fuel the recent flip in retail sentiment like the behavior seen during the previous year. 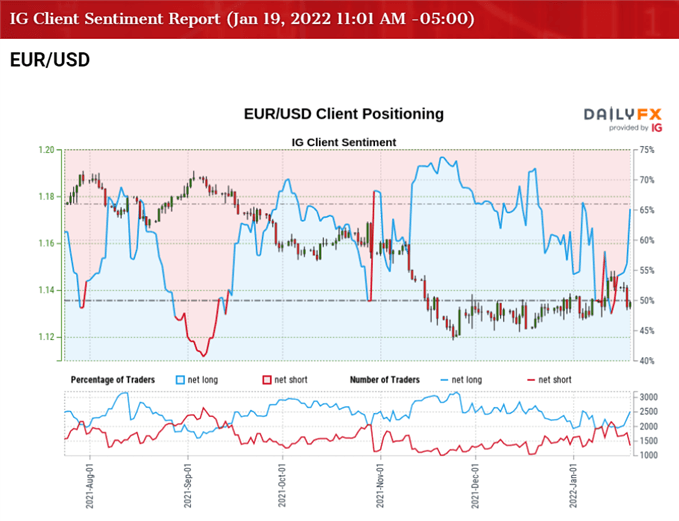 The IG Client Sentient report shows 63.52% of traders are currently net-long EUR/USD, with the ratio of traders long to short standing at 1.74 to 1.

The number of traders net-long is 6.52% higher than yesterday and 19.75% higher from last week, while the number of traders net-short is 9.24% lower than yesterday and 24.35% lower from last week. The jump in net-long interest has brought back the crowding behavior seen in 2021 as 64.05% of traders were net-long EUR/USD in mid-December, while the surge in net-short position comes as the exchange rate snaps the recent series of lower highs and lows.

With that said, EUR/USD may stage a larger rebound over the coming days as it appears to be reversing course ahead of the monthly low (1.1272), but the account of the ECB meeting may do little to prop up the exchange rate as the “the Governing Council stands ready to adjust all of its instruments, as appropriate and in either direction, to ensure that inflation stabilises at its 2% target over the medium term.”