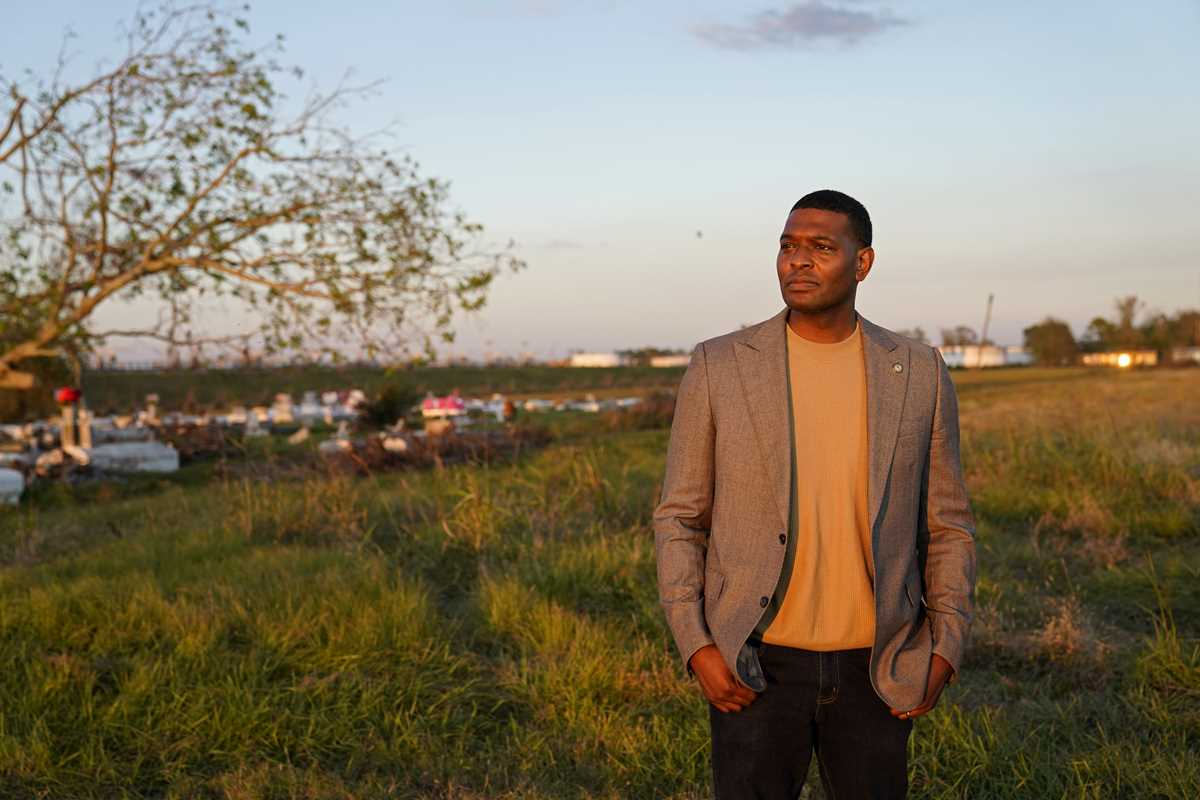 EPA Administrator Michael Regan, right, speaks to reporters at the O.B. Curtis Water Treatment Plant, a Ridgeland based facility near Jackson, Miss., about longstanding water issues that have plagued the city, on Nov. 15, 2021. The Environmental Protection Agency is taking a series of enforcement actions to address air pollution, unsafe drinking water and other problems in minority communities in three Gulf Coast states that Administrator Michael Regan visited as part of a “Journey to Justice” tour last fall.(AP Photo/Rogelio V. Solis, File) 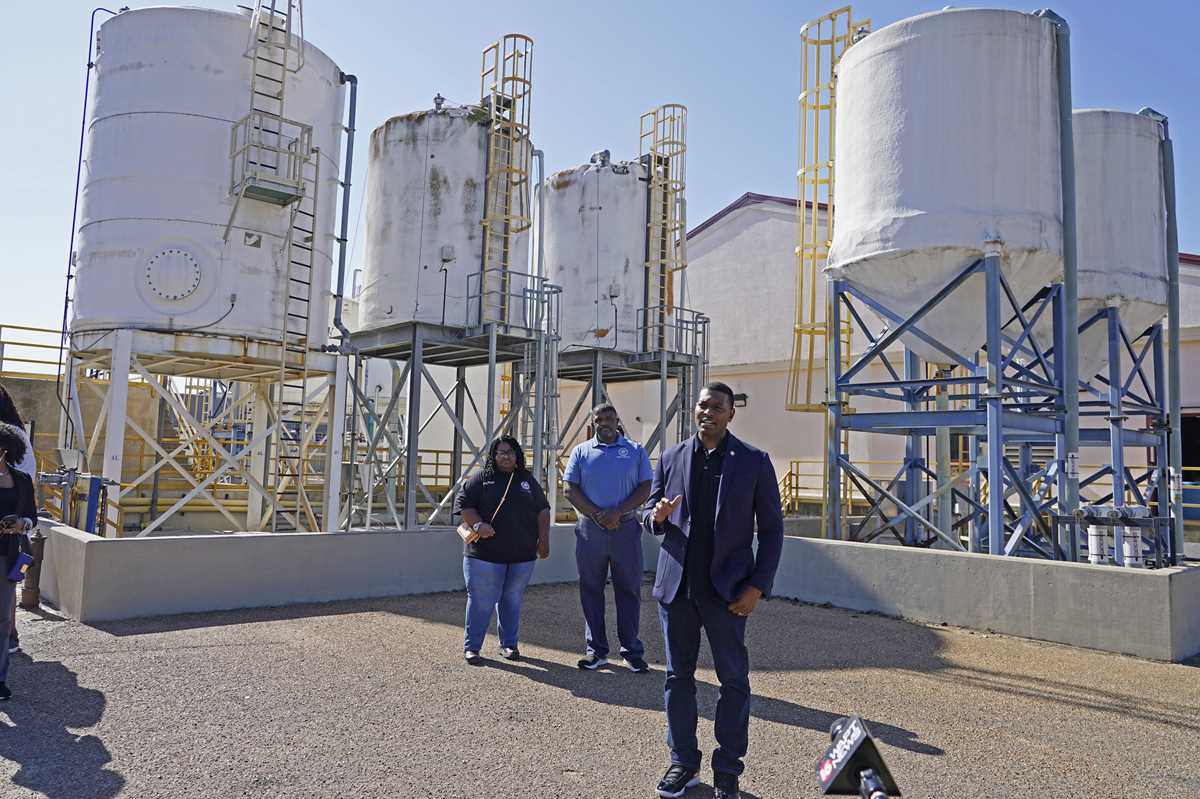 EPA staff members, walk past a closed drinking water fountain at Wilkins Elementary School in Jackson, Miss., on Nov. 15, 2021. On Nov. 16, several Jackson schools resorted to virtual learning as the city reported low or no water pressure throughout the city and affected schools were closed for the day. The Environmental Protection Agency is taking a series of enforcement actions to address air pollution, unsafe drinking water and other problems in minority communities in three Gulf Coast states that Administrator Michael Regan visited as part of a “Journey to Justice” tour last fall. (AP Photo/Rogelio V. Solis, File) 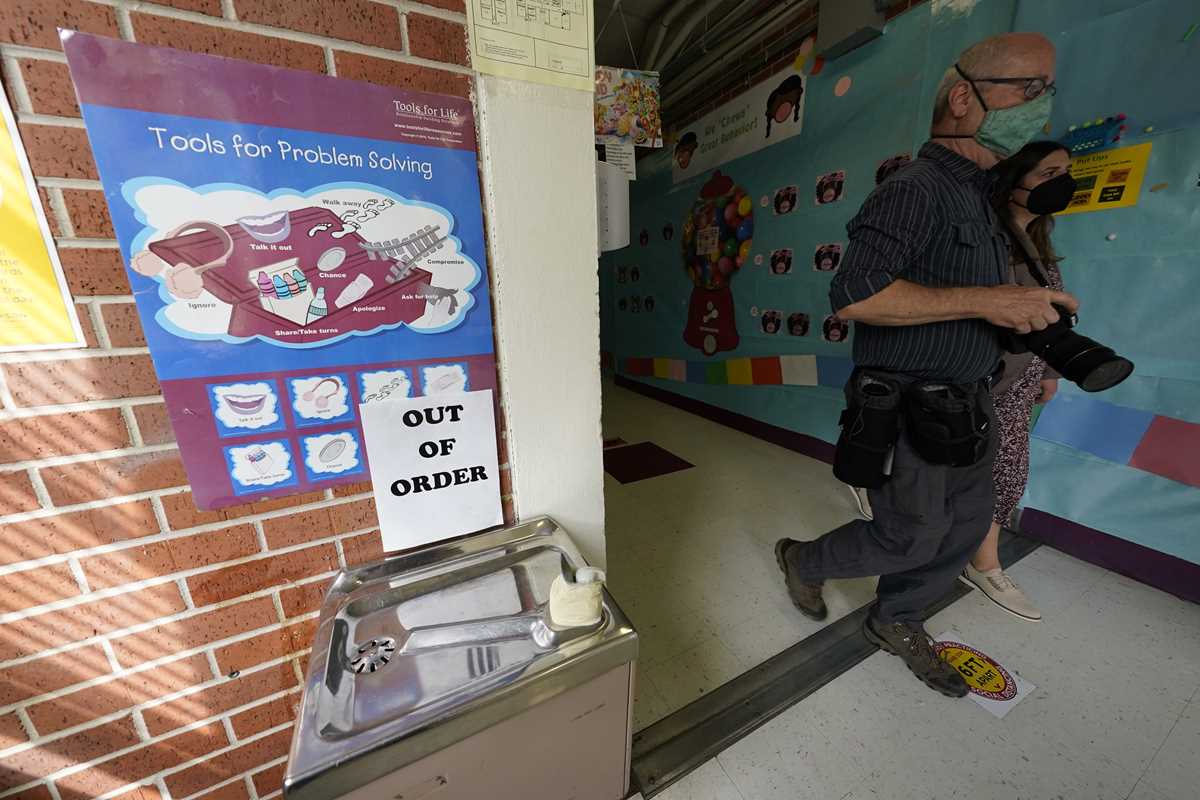 The agency will conduct unannounced inspections of chemical plants, refineries and other industrial sites suspected of polluting air and water and causing health problems to nearby residents, Regan said. And it will install air monitoring equipment in Louisiana’s “chemical corridor” to enhance enforcement at chemical and plastics plants between New Orleans and Baton Rouge. The region contains several hotspots where cancer risks are far above national levels.

The EPA also issued a notice to the city of Jackson, Mississippi, saying its aging and overwhelmed drinking water system violates the federal Safe Drinking Water Act. The order directs the city to outline a plan to “correct the significant deficiencies identified” in an EPA report within 45 days.

In separate letters, Regan urged city and state officials to use nearly $79 million in funding allocated to Mississippi under the bipartisan infrastructure law “to solve some of the most dire water needs in Jackson and other areas of need across Mississippi.”

The actions were among more than a dozen steps being taken in response to Regan’s tour last November. Regan visited low-income, mostly minority communities in Mississippi, Louisiana and Texas as part of an effort to focus federal attention on communities adversely affected by decades of industrial pollution.

A Toxics Release Inventory prepared by the EPA shows that minority groups make up 56% of those living near toxic sites such as refineries, landfills and chemical plants. Negative effects include chronic health problems such as asthma, diabetes and hypertension.

“In every community I visited during the Journey to Justice tour, the message was clear: residents have suffered far too long and local, state, and federal agencies have to do better,” Regan said in a statement. ”Our actions will begin to help not only the communities I visited on this tour, but also others across the country who have suffered from environmental injustices.”

The unannounced inspections of chemical plants and other sites “are going to keep these facilities on their toes,” Regan said Tuesday in a conference call with reporters.

Inspections currently are done on a schedule or with advance notice, Regan said, but that is about to change. “We are amping up our aggressiveness to utilize a tool that’s in our toolbox that … has been there for quite some time,” he said.

When facilities are found to be noncompliant, the EPA “will use all available tools to hold them accountable,” he added.

A pilot project combining high-tech air pollution monitoring with additional inspectors will begin in three Louisiana parishes, including St. John the Baptist, St. James and Calcasieu. The parishes are home to scores of industrial sites and are long plagued by water and air pollution.

Regan, a former environmental regulator in North Carolina, has made environmental justice a top priority since taking over as EPA head last year. As the first Black man to lead the agency, the issue “is really personal for me, as well as professional,″ he told The Associated Press in November.

Historically marginalized communities like St. John and St. James, along with cities such as New Orleans, Jackson, Mississippi and Houston, will benefit from the $1 trillion bipartisan infrastructure law signed by President Joe Biden, Regan said. The law includes $55 billion for water and wastewater infrastructure, while a sweeping climate and social policy bill pending in the Senate would pump more than twice that amount into EPA programs to clean up the environment and address water and environmental justice issues.

As part of its enforcement action, the EPA is requiring a former DuPont petrochemical plant in La Place, Louisiana, to install fence-line monitors to identify emissions from the site, Regan said. The plant is now owned by the Japanese conglomerate Denka.

The agency also said it will push for greater scrutiny of a proposed expansion of a Formosa Plastics plant in St. James and issued a notice of violation to a Nucor Steel plant that emits hydrogen sulfide and other harmful chemicals.

Regan said he has spoken with New Orleans Mayor LaToya Cantrell about Gordon Plaza, a city neighborhood built on the site of a former toxic landfill. Gordon Plaza was designated as a Superfund site in the 1990s, but dozens of mostly Black families still live there.

The EPA will review the site, starting in March, Regan said, and will add nine homes not included in earlier plans to help families move. City officials hope to use money from the infrastructure law to relocate families and build a solar farm on the site.