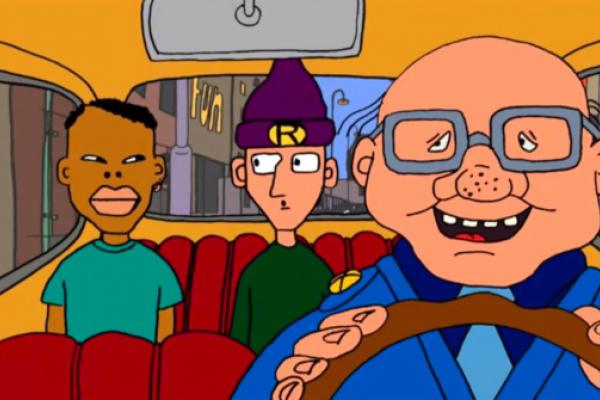 By Hernan Panessi via El Planteo.

There was a time when cartoons rehearsed speeches against the grain of good manners, where the cheekiness broke the prevailing norms and where new narratives full of incorrectness, sex, drugs and vagrancy appeared. Why, 25 years after its premiere, do some people still remember Robin, the wonderful creation of the Swedish animator Magnus Carlsson?

In the story, Robin is a slacker who lives in a bare apartment, takes any casual job, likes to party and hang around with Benjamin, his heavy-drinker best friend.

Over the course of 30 self-contained episodes full of slice-of-life, Robin’s misadventures almost always end up in the same place: doing nothing constructive with his life.

The series first aired on Sweden’s SVT1. In Latin America, the Robin series was broadcast on the legendary Locomotion TV channel. In total, it was broadcast to some 50 countries. “It’s great that people still like it,” Magnus tells El Planteo.

At the time, Robin mixed a certain lack of prejudice with a strong underground spirit, compressing a dry story and novel that captivated people across generations with slices of mundane realism.

In addition, among its curiosities, in Latin America, the voice of the character was provided by Mario Castañeda himself, known for dubbing Goku in Dragon Ball Z.

“People like nostalgia. The older you get, the more nostalgic you become. Those who remember Robin from when they were kids or teenagers are now middle-aged adults and want to remember things the way they used to be,” he continues.

However, it’s hard to argue that Robin was his most recognized work in the world, as Magnus Carlsson is also the author behind Three Amigos and Jerry, aired on ViacomCBS (NASDAQ:VIAC)’s Nickelodeon and Jetix, and Lisa, seen on AT&T Inc. (NYSE:T)’s Cartoon Network in the “Small World” block.

“It’s complicated to say which is my most popular series. Some of my series have aired in more countries than Robin, although they were aimed at children.”

Magnus Carlsson is currently developing a couple of new projects and hopes that “one of them will come to fruition soon.” He also spends his days writing and painting pictures.

“The best thing about making Robin was that it reached many, many viewers all over the world. The worst thing was that I worked with a film company that couldn’t produce more episodes or a feature film,” he confesses.

Sweden in the ’90s: between political detachment, nihilism, and incorrectness

Inspired by Magnus’ own life, in his twenties when he lived in his first apartment of his own (“I was curious, shy and a bit of a womanizer, like Robin”), the animated series narrates a social reality in which “politics and what was politically correct were not discussed at large”.

He continues: “It was about surviving and, at the same time, having fun,” he says.

-What things would Robin do if it was produced today?

Robin has a part-time job as a computer technician and Benjamin is prematurely retired after an unfortunate accident. He has been given a wheelchair and is a medical cannabis activist. They still hang out. Robin and his friend Benjamin have been friends since they were teenagers. Time passes quickly and suddenly they are standing looking at each other and they are over 50 years old. Or, Robin is standing and Benjamin is sitting in his wheelchair, in which he now spends his days as a result of an unnecessary accident.

-What happened to Benjamin and why is he now in a wheelchair?

-During a party, he spent the entire night up in a tree drinking beer, and then Robin bet that Benjamin could safely jump out of the tree with an umbrella as a parachute. In turn, Robin lives in his spacious 35-square-meter studio. And he’s completely fine. The job as a computer technician at Achmed’s IT service and Dry Cleaning is also fine. It’s not a good tech job, to be honest. Most of the time he travels with small packages to different addresses in the city. But it’s okay. Sometimes Robin DJs at PizzaGuzzen where he plays hip-hop and some dub. He didn’t start a family. He doesn’t really have time for that. Sometimes he has to relax. Or… most of the time.

See also: ‘The Freak Brothers:’ A Stoner Animated Series With A Cast That Will Blow Your Mind

-And what about Benjamin’s life?

-Benjamin has moved into the same building as Robin, upstairs. But since the accident, Benjamin spends most of his time with Robin, because it is very difficult to go up or down any flight of stairs (no elevator) in the wheelchair. Benjamin is pre-retired and is a big advocate of medical cannabis. He is greatly helped by this medication and takes every opportunity to relieve pain. Benjamin is also very active on Tinder, with varying degrees of success.

During the 1990s, Sweden was a fairly carefree country. “It was easy to get an apartment and work. We were also precocious with IT and computers. And we young people had enough money to be able to travel the world,” explains the author.

And it’s no wonder that Robin had a very positive reception when it first started airing on television. Later, however, there was even more buzz when Radiohead wanted to have Robin as a starring character in a music video.

What, Radiohead!?!? Yes. In 1997, the British band Radiohead came across the Robin series on Channel 4 and went nuts. They quickly contacted Magnus Carlsson to have Robin star in the music video for their song “Paranoid Android”.

At the time, some parts of that music video were censored for containing “scenes of explicit nudity”.

-When you did the series, did you have any “encouragement”?

-What is your opinion on the recreational use of cannabis?

-I don’t like it, but I have no real opinion about people who smoke and people who don’t smoke.

-What do you think is the most controversial episode of the series?

-Nowadays people get upset about everything, so it’s impossible to say.