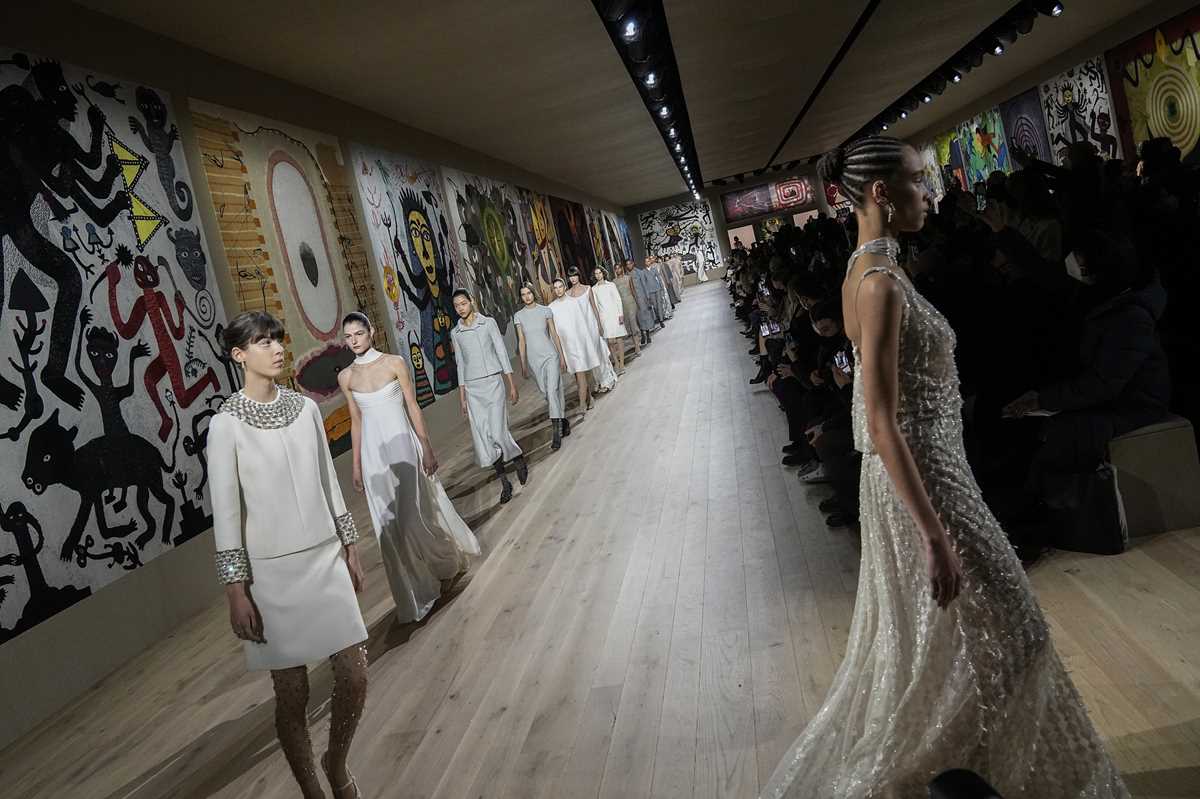 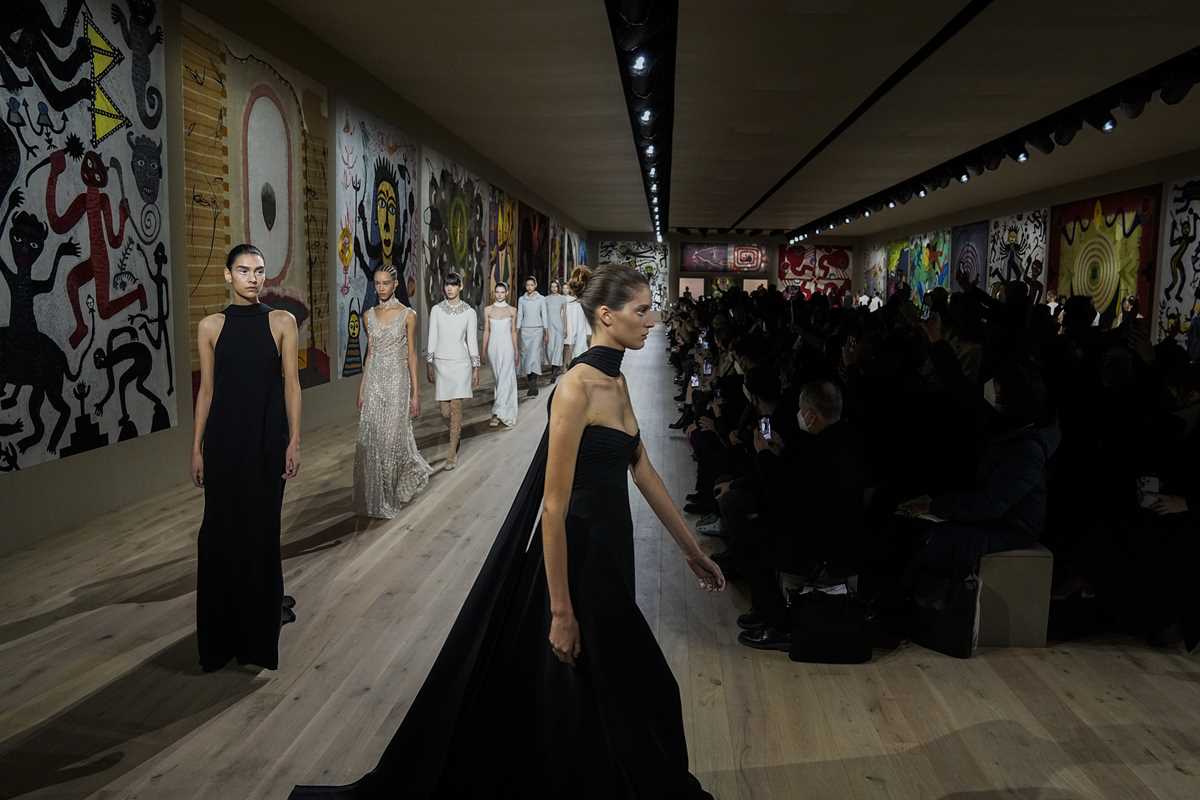 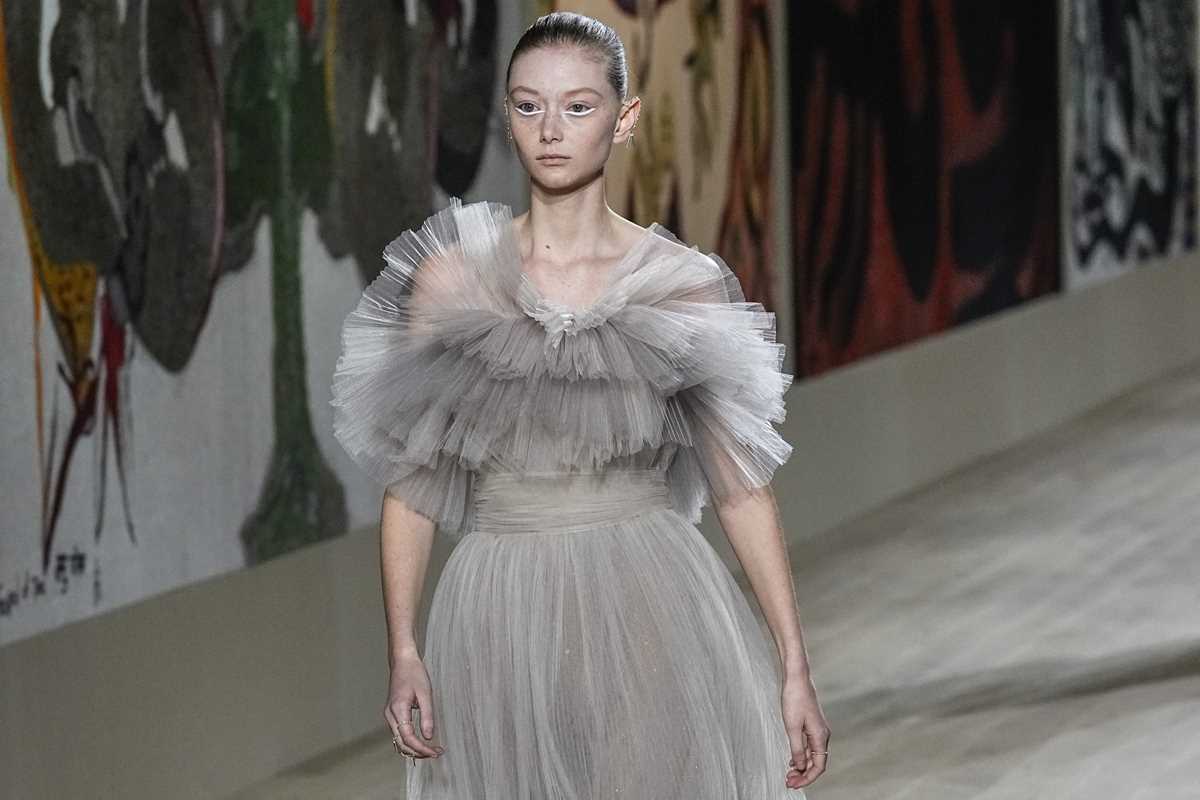 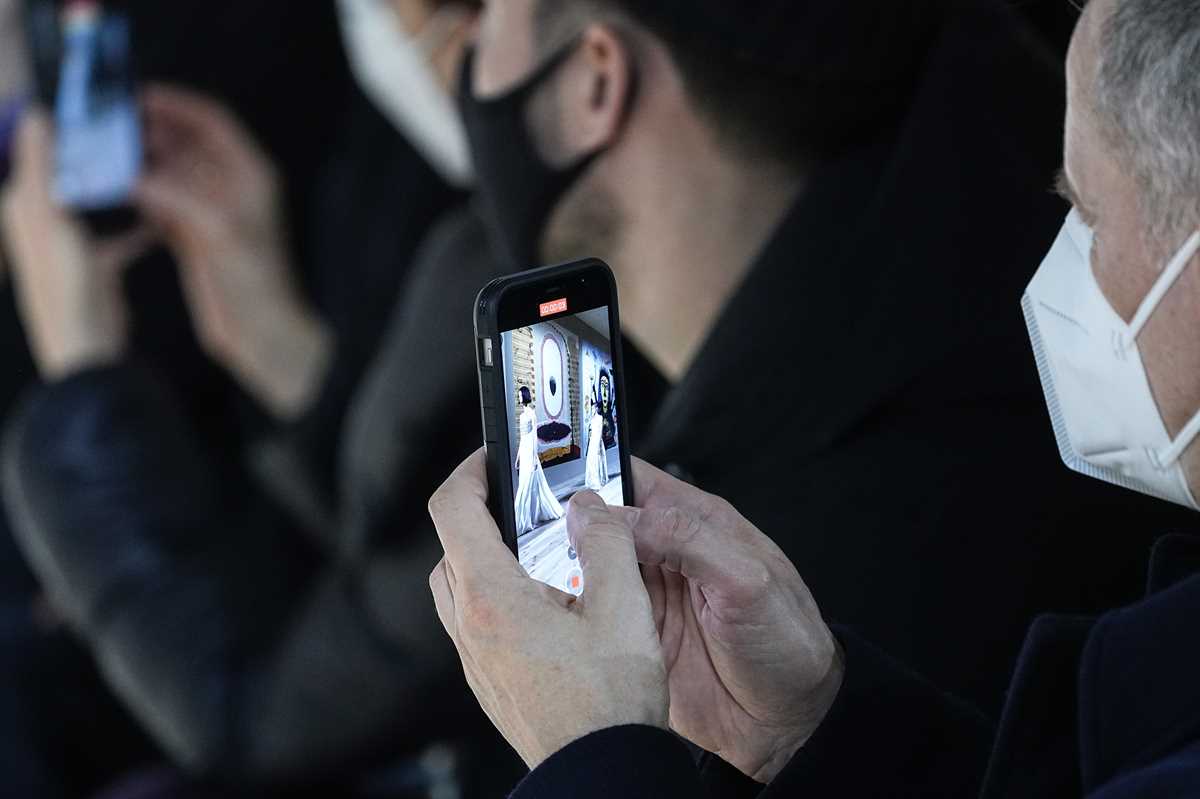 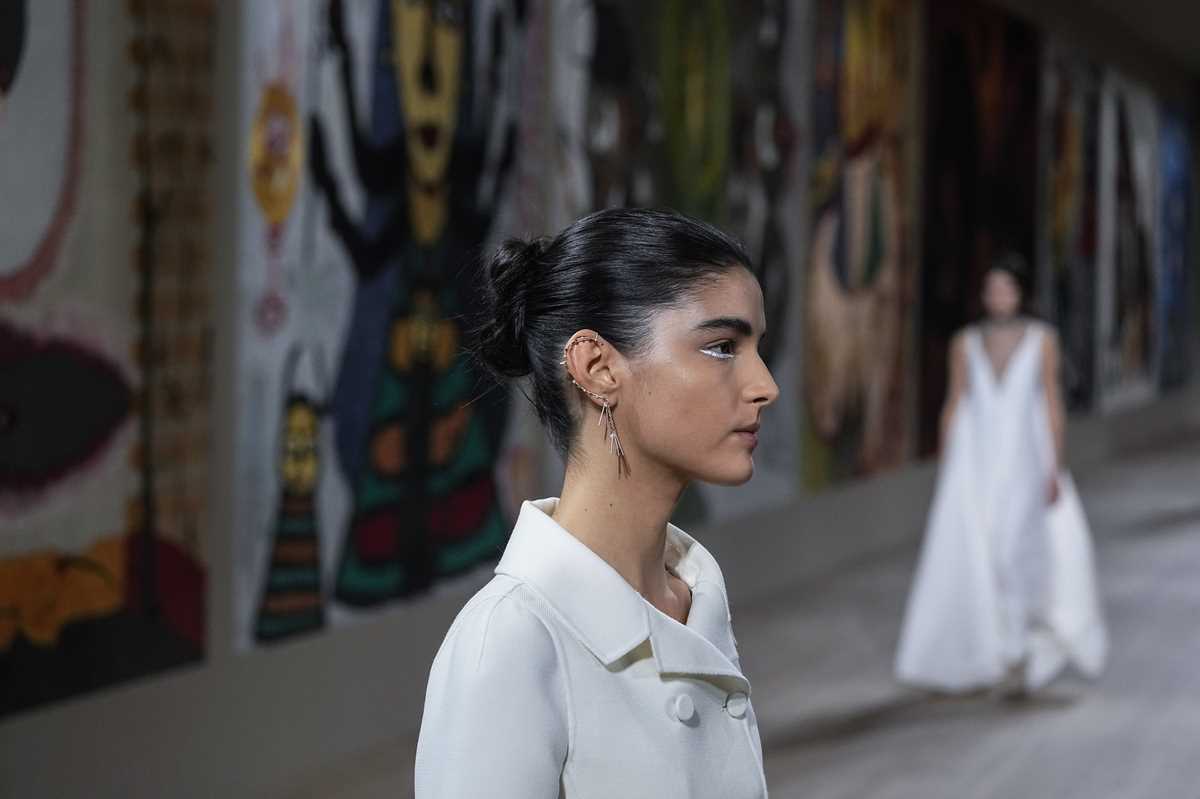 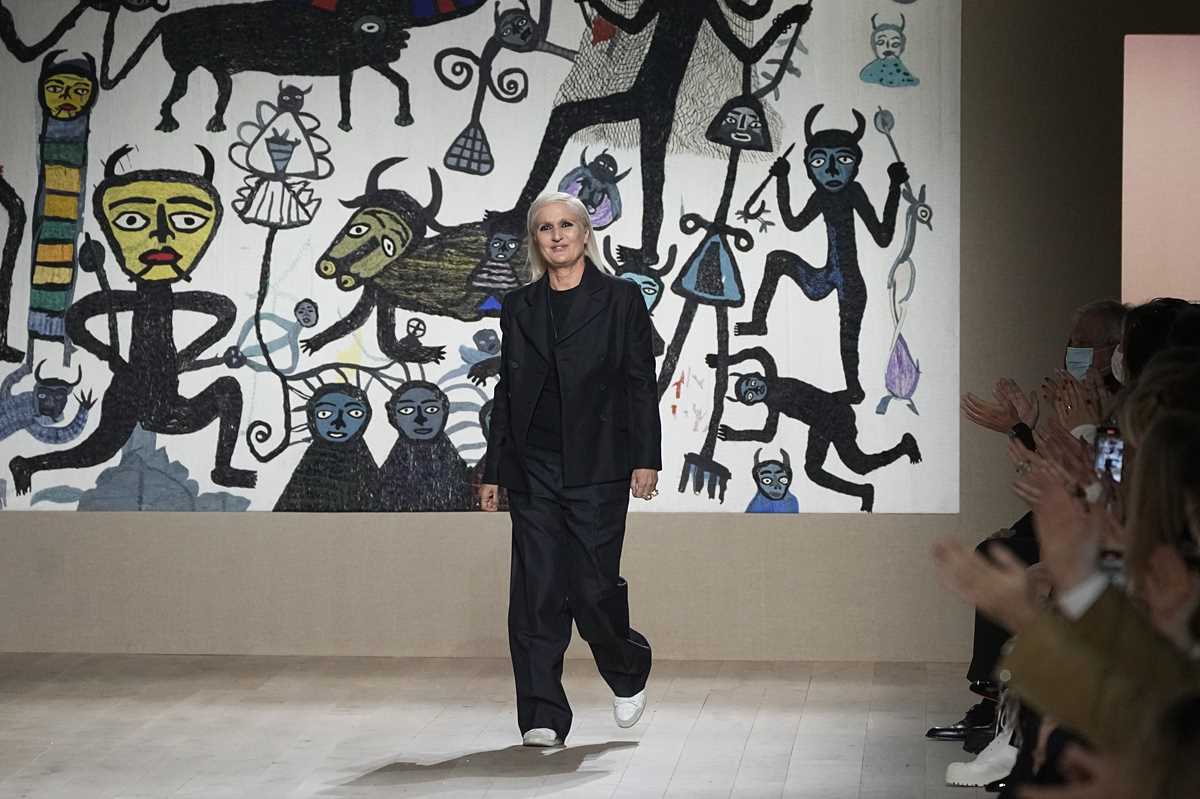 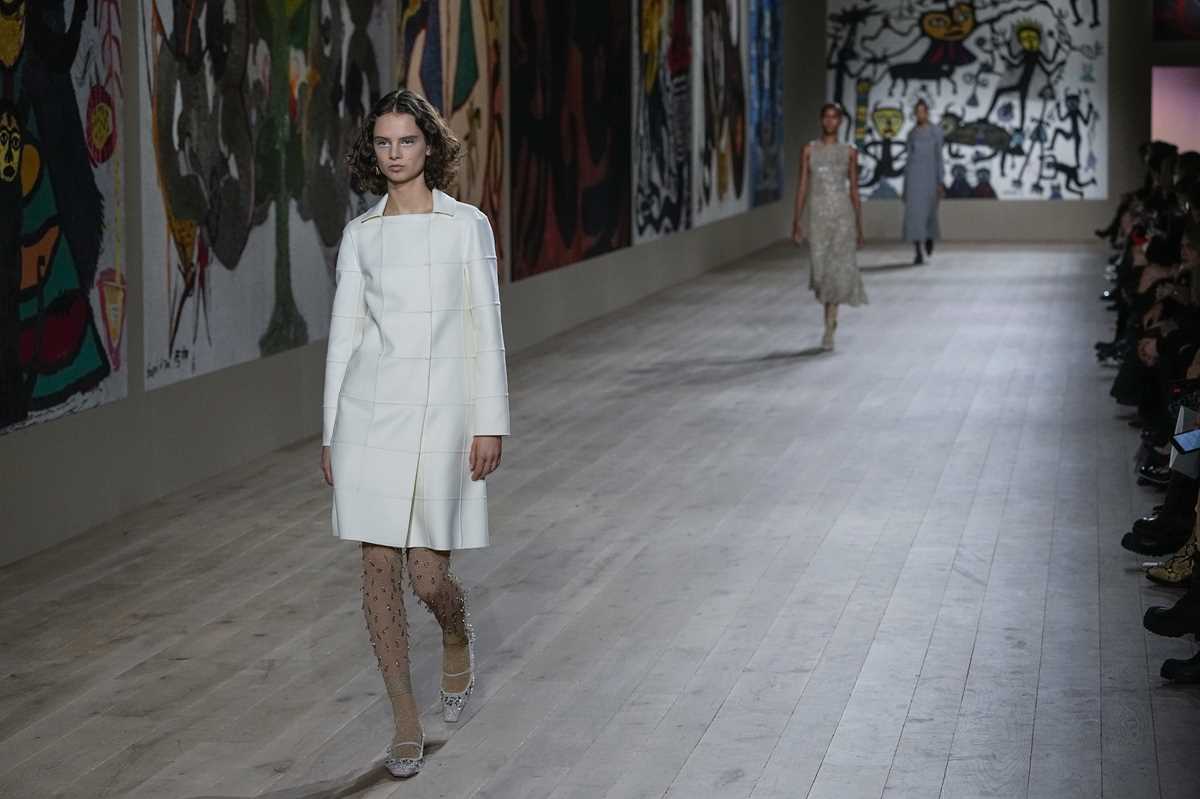 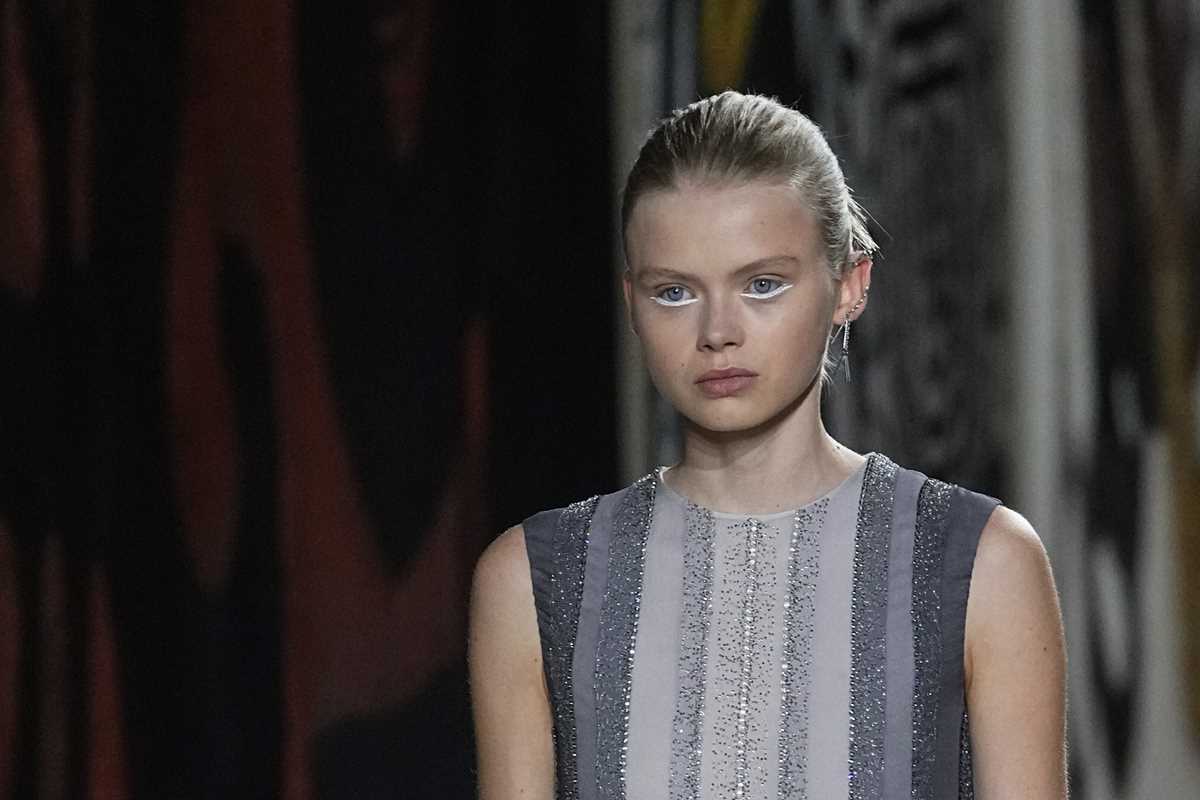 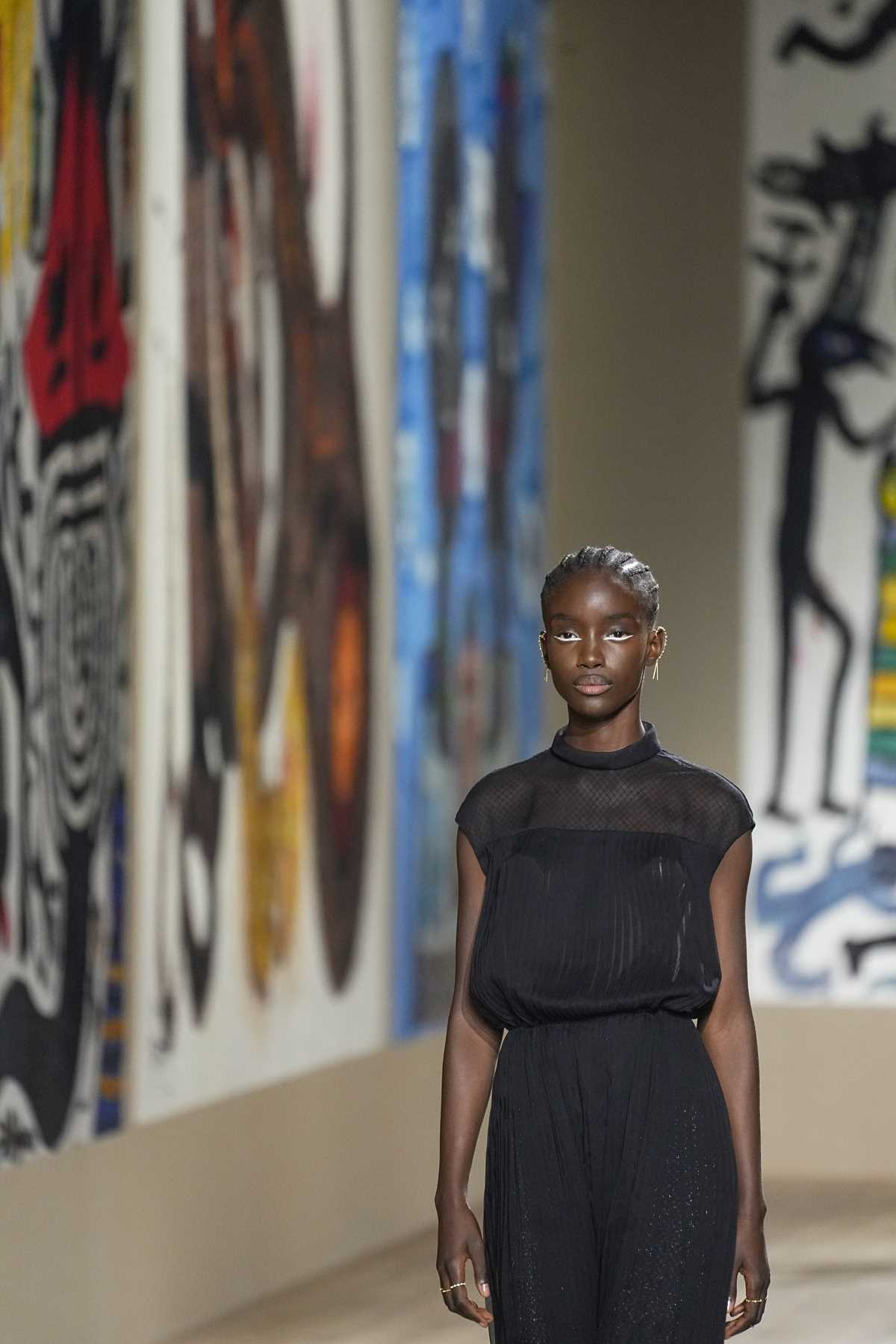 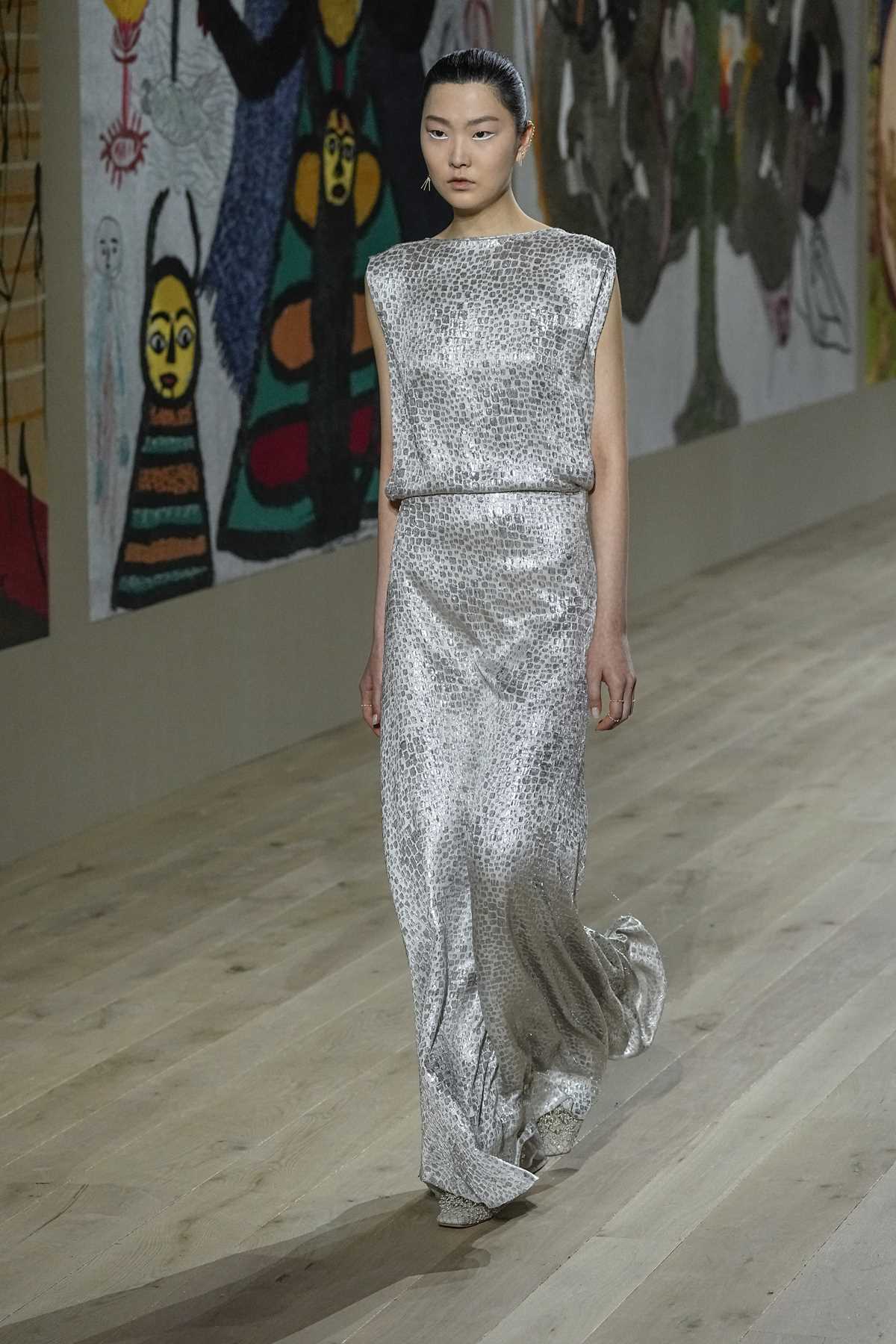 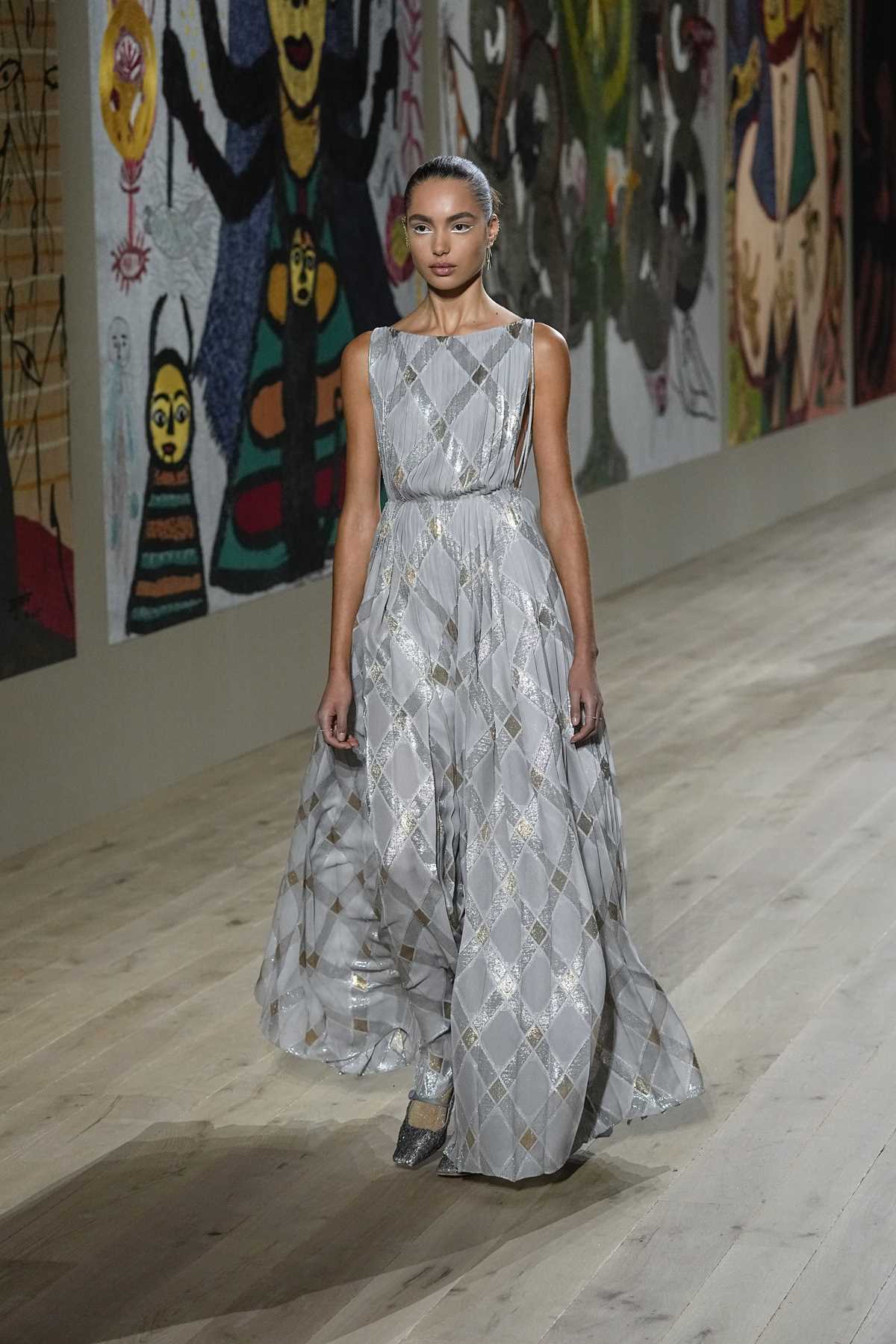 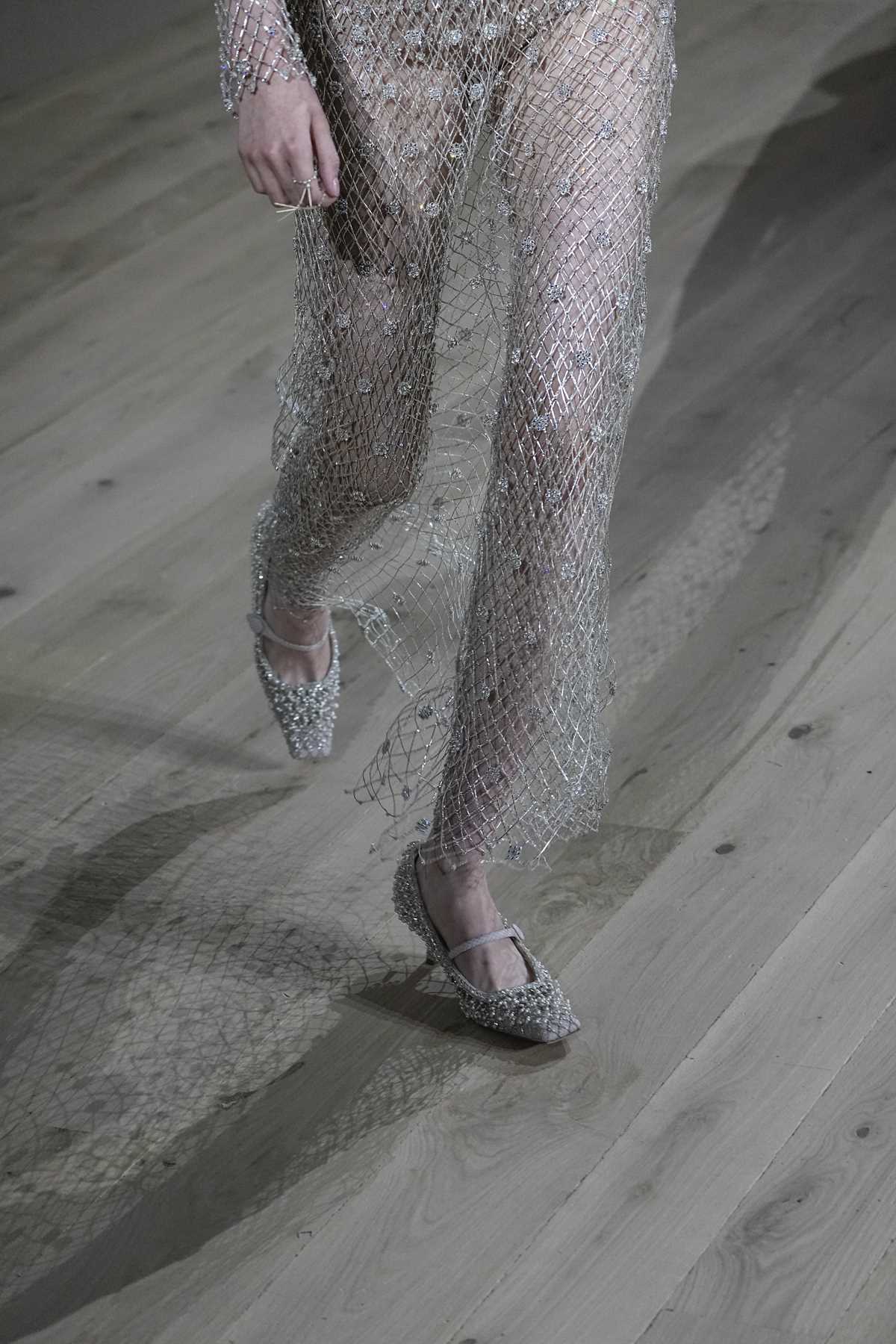 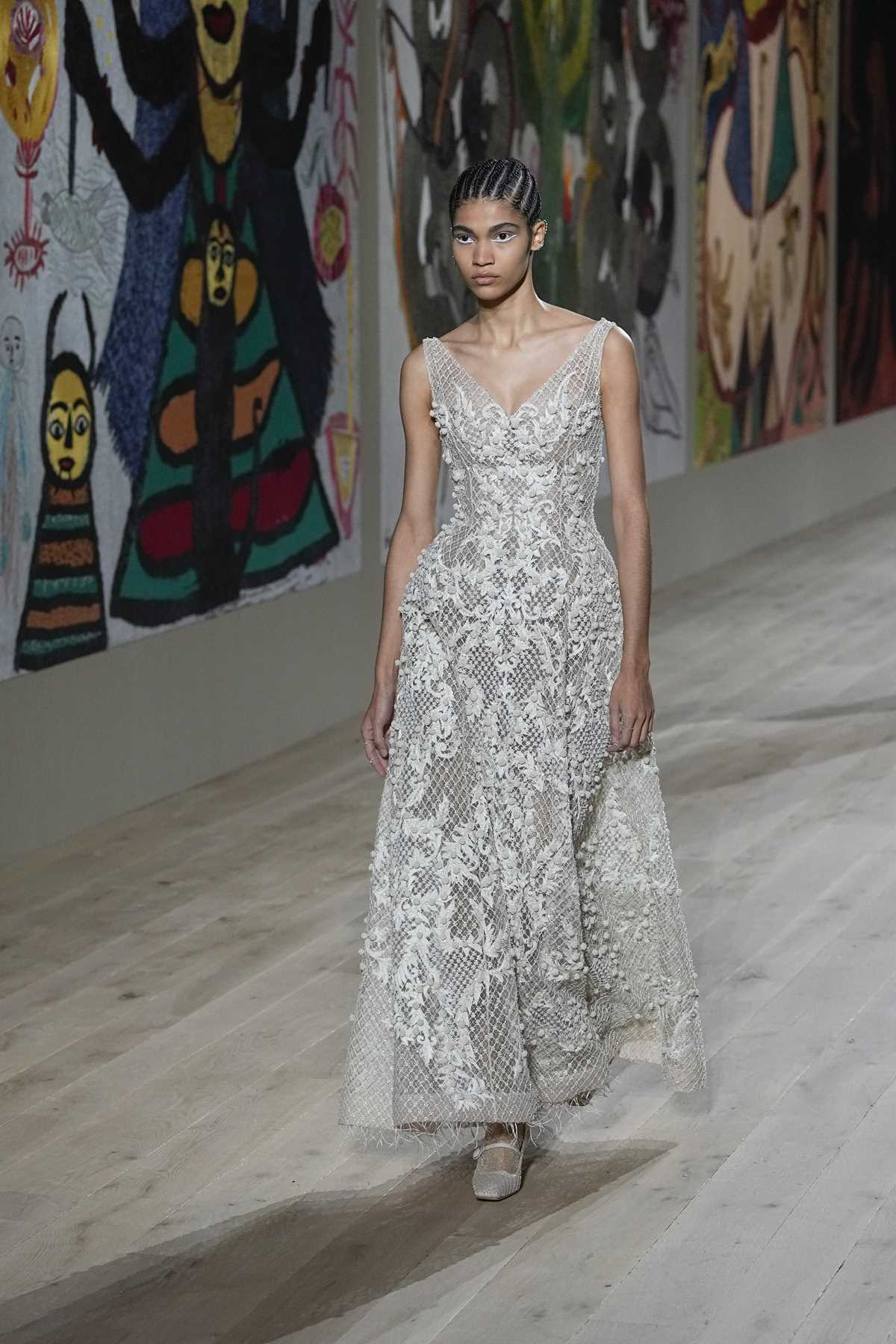 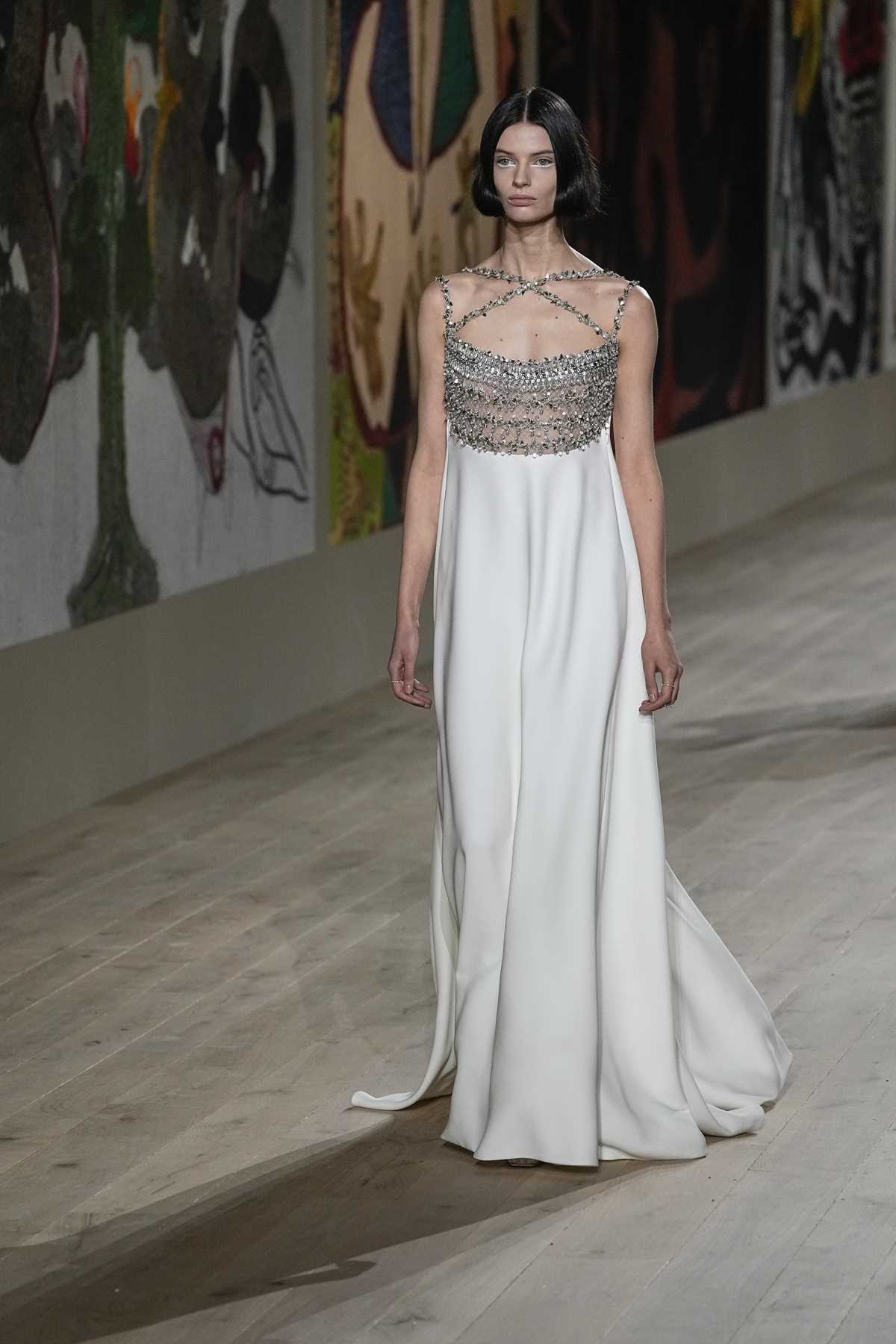 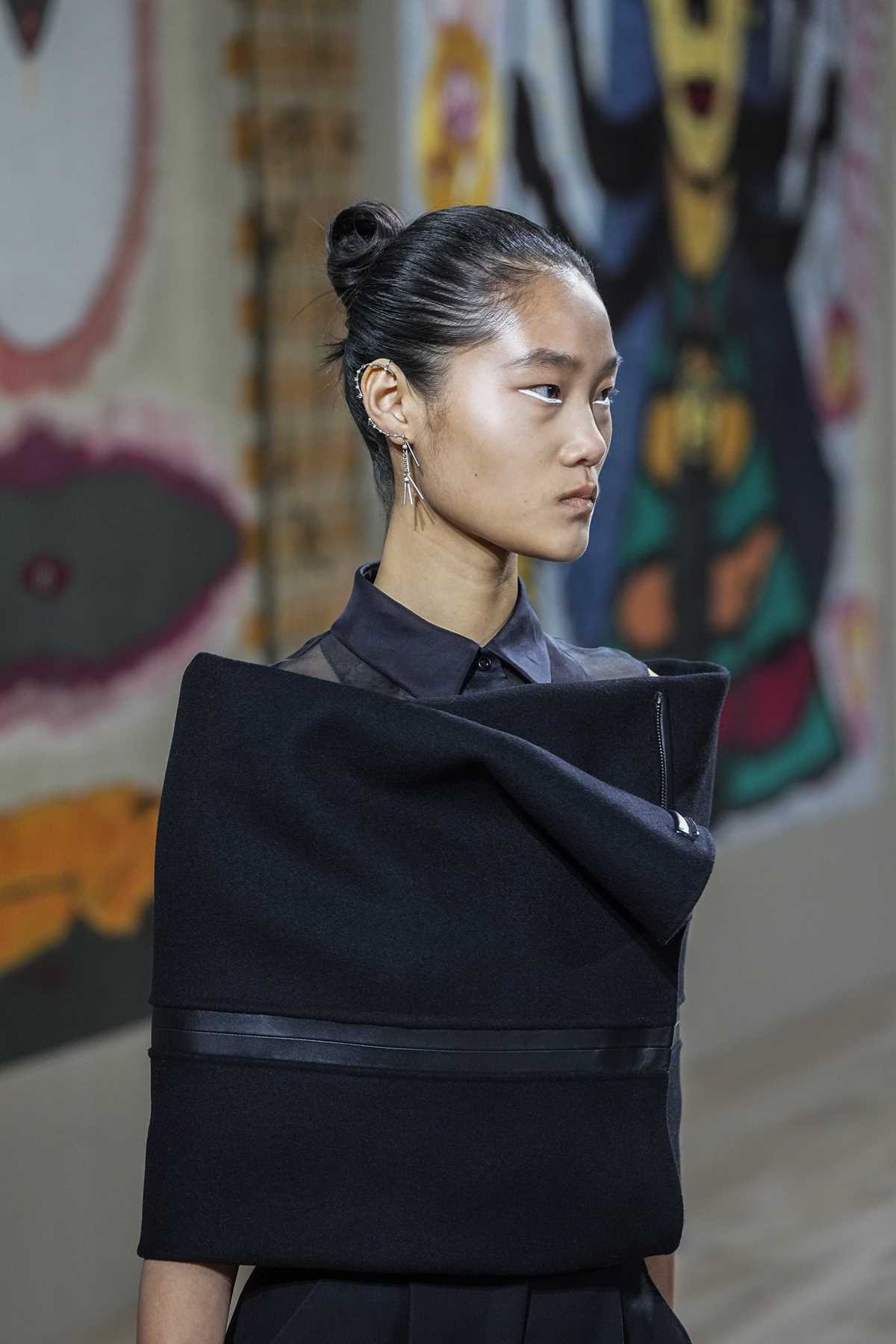 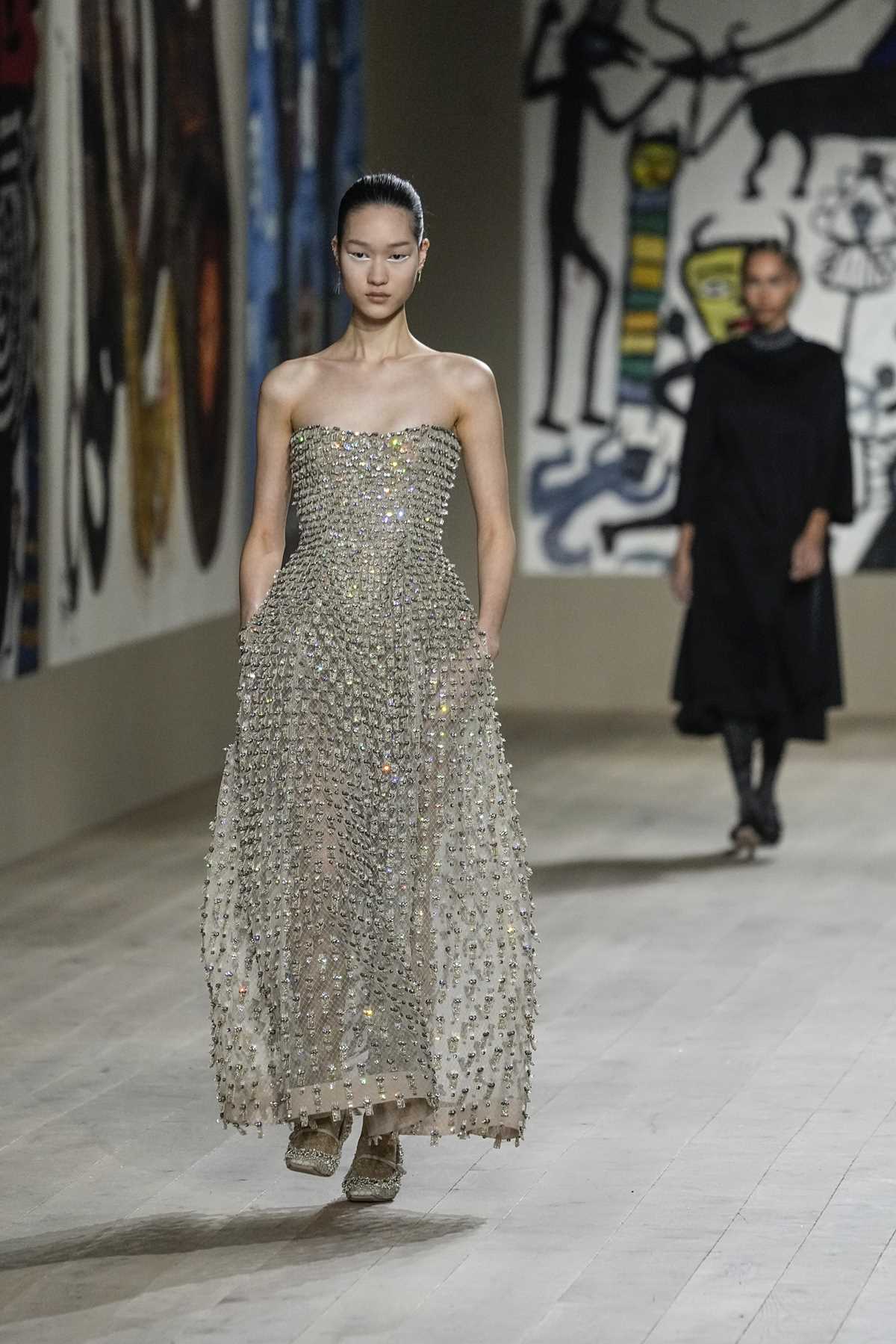 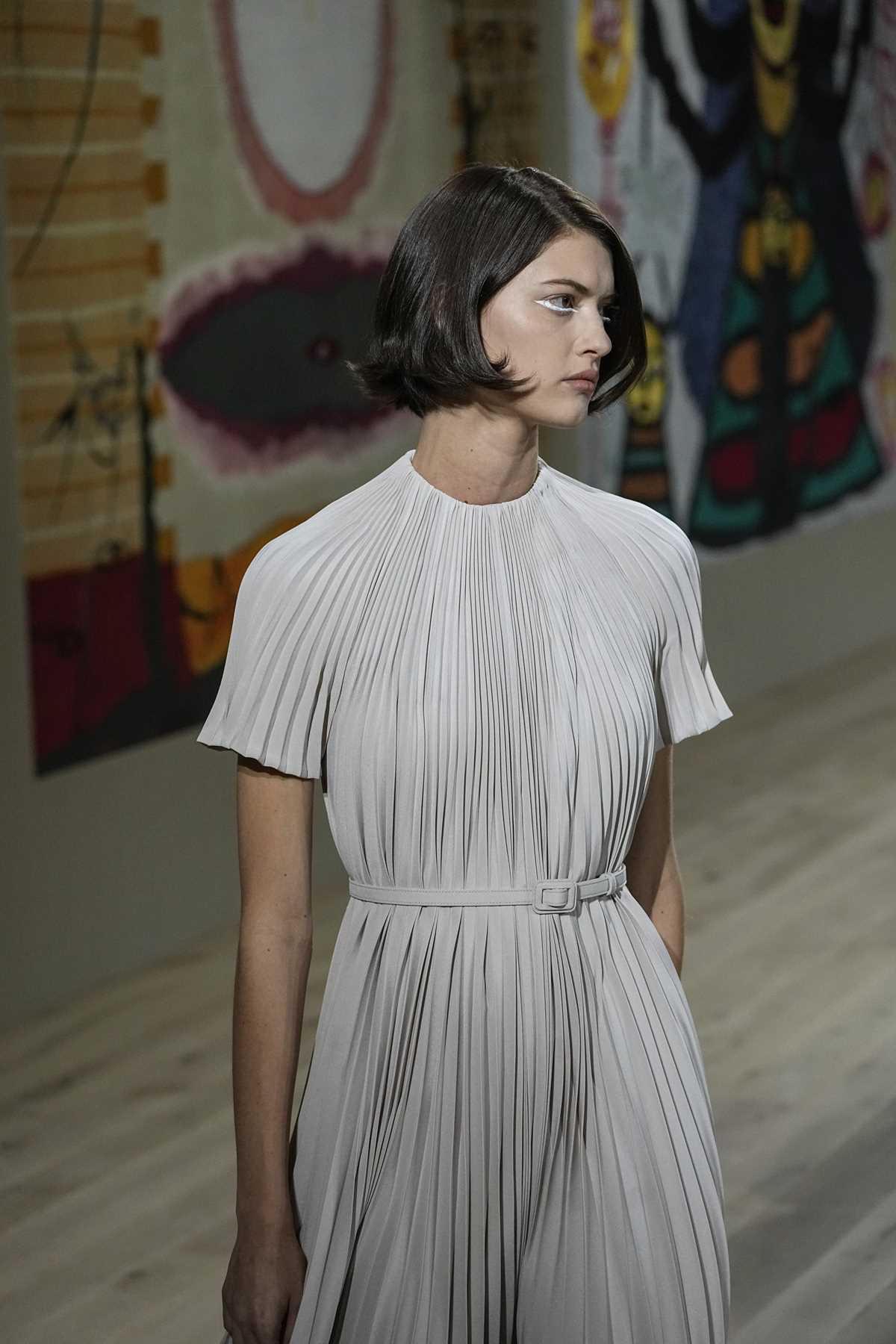 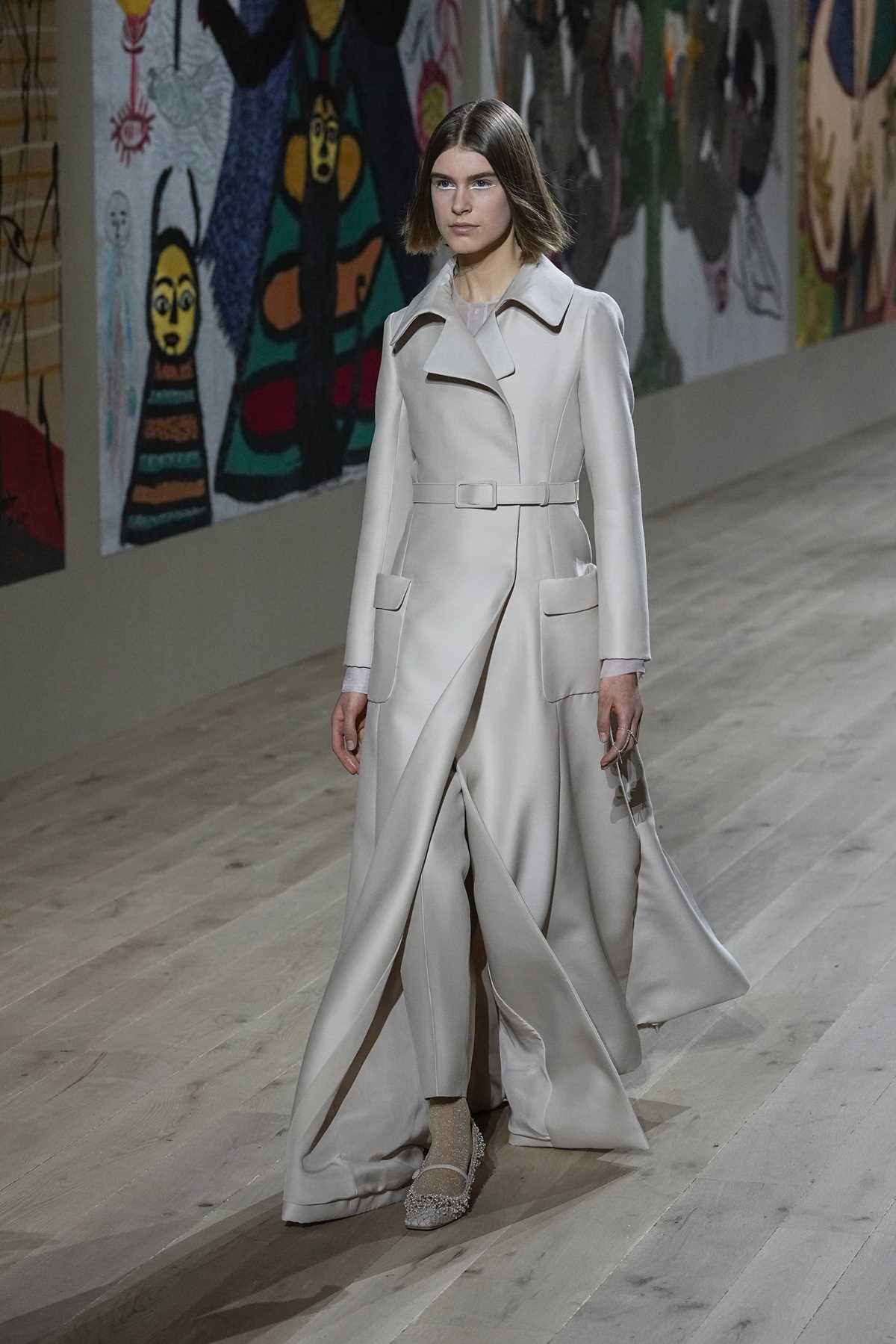 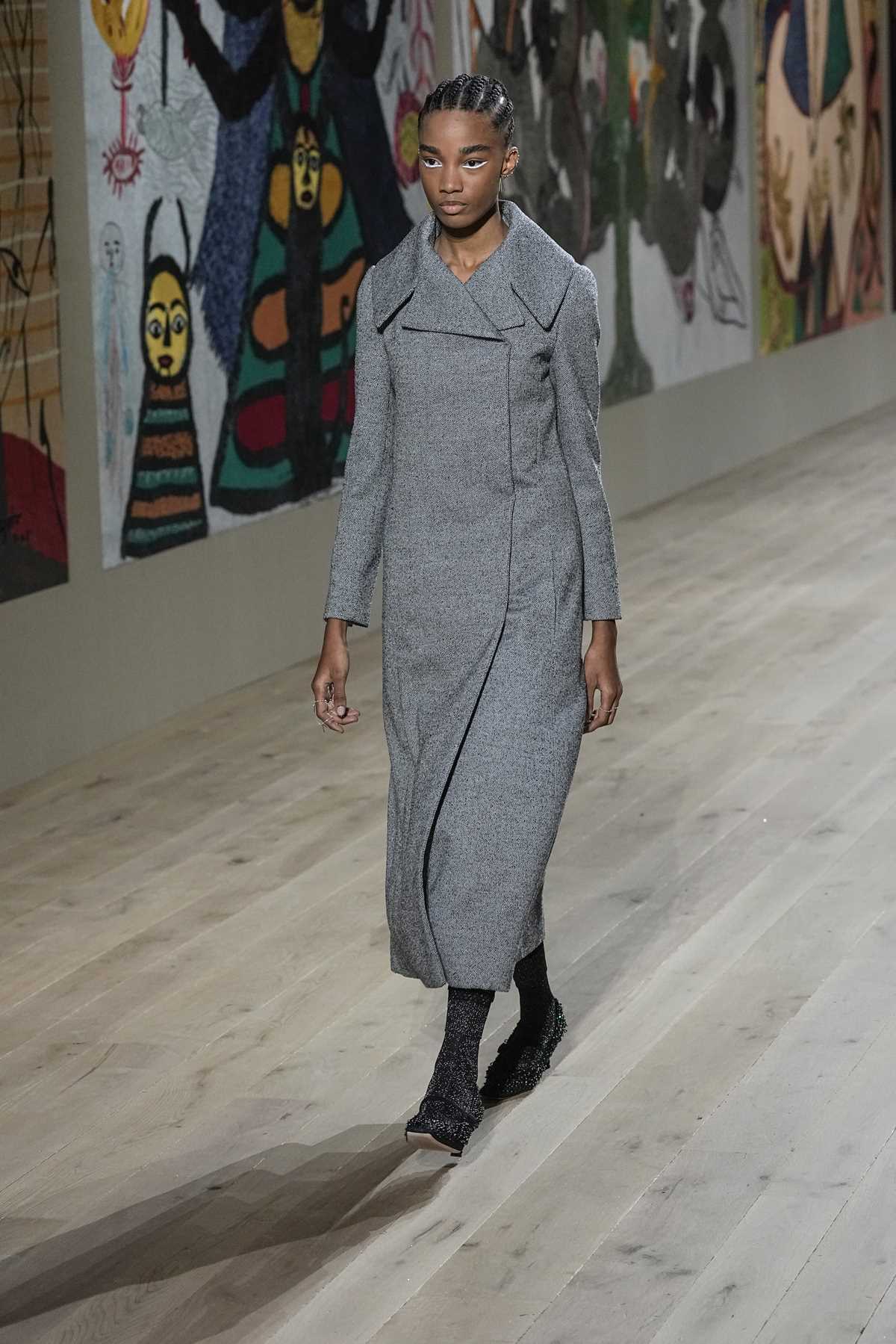 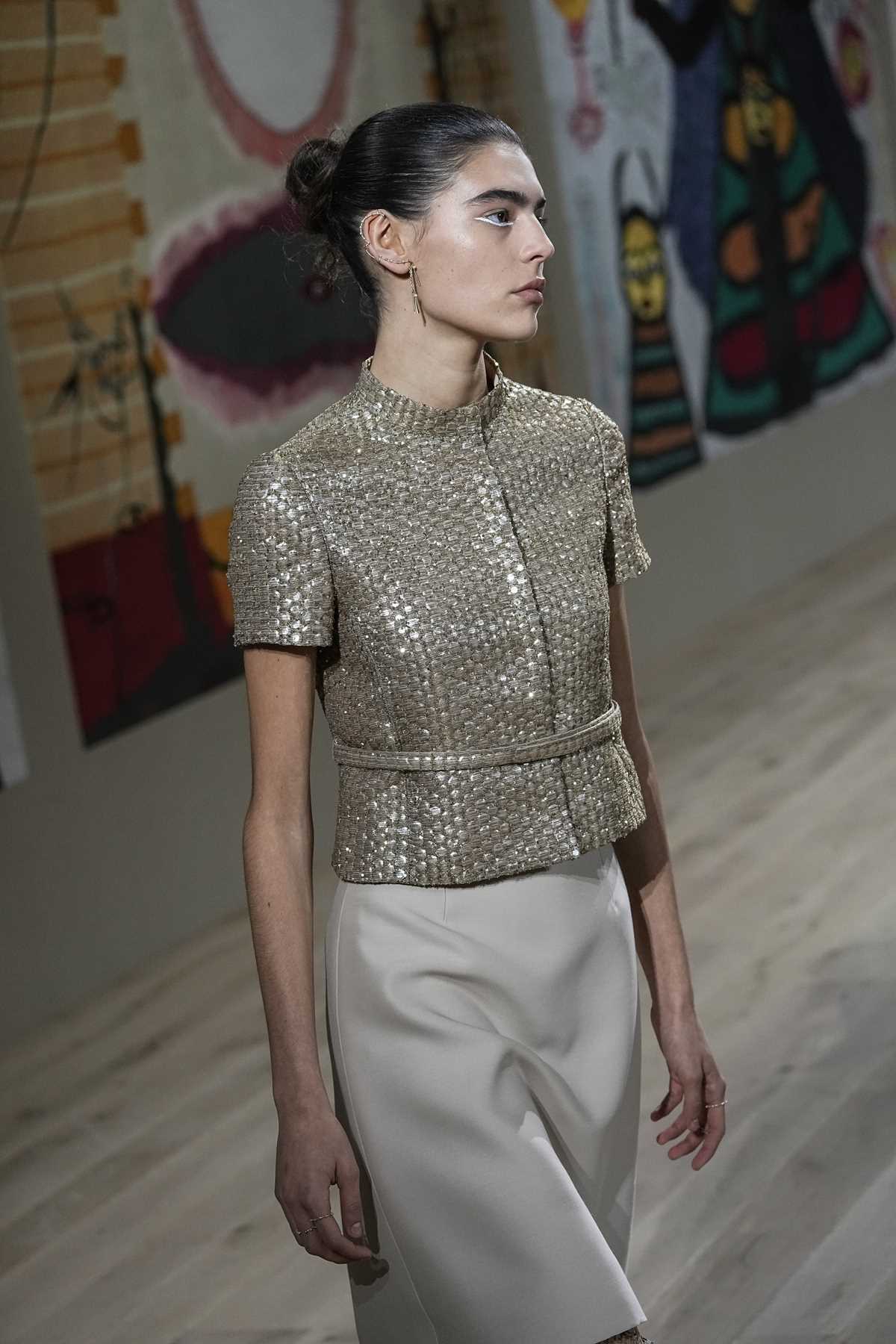 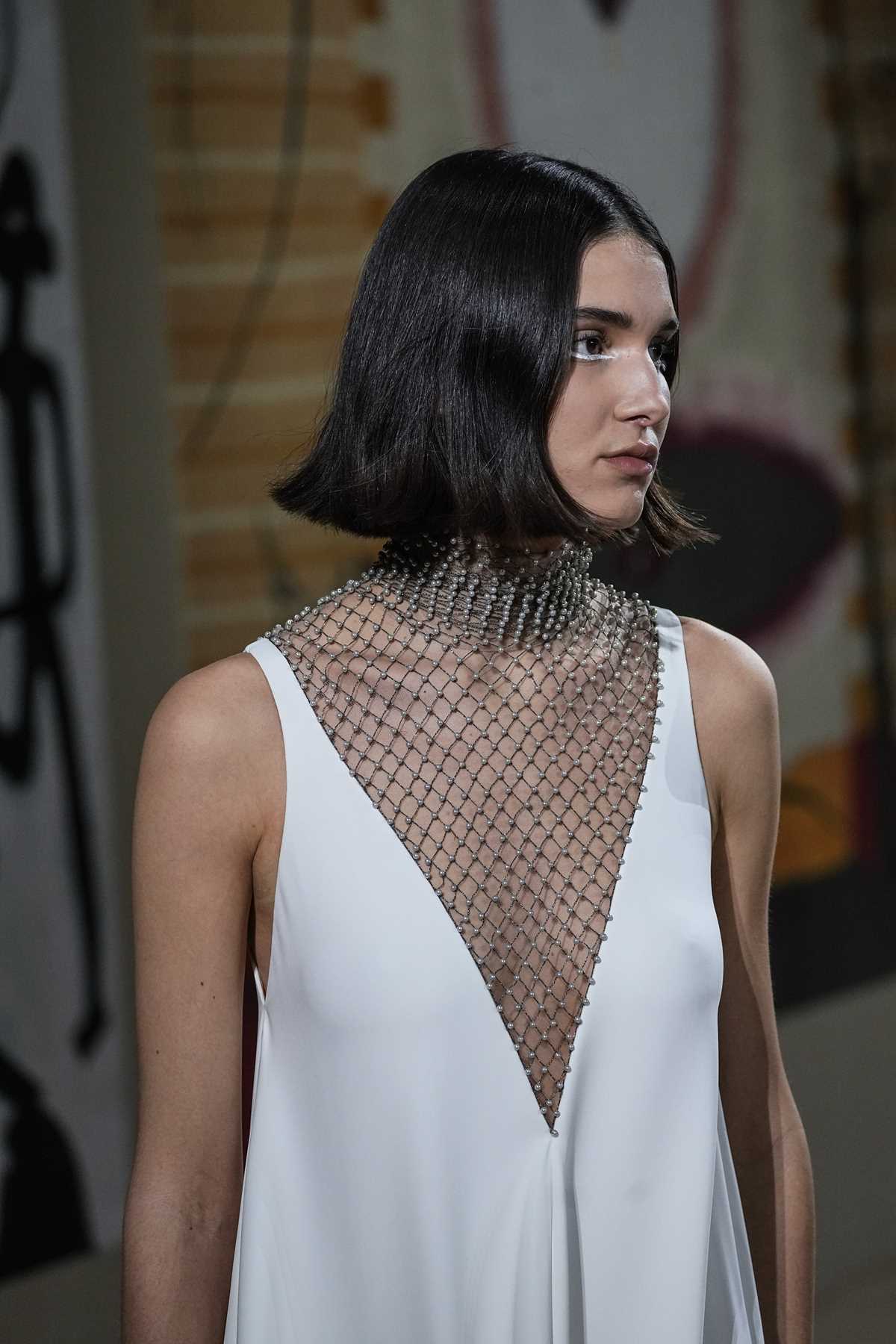 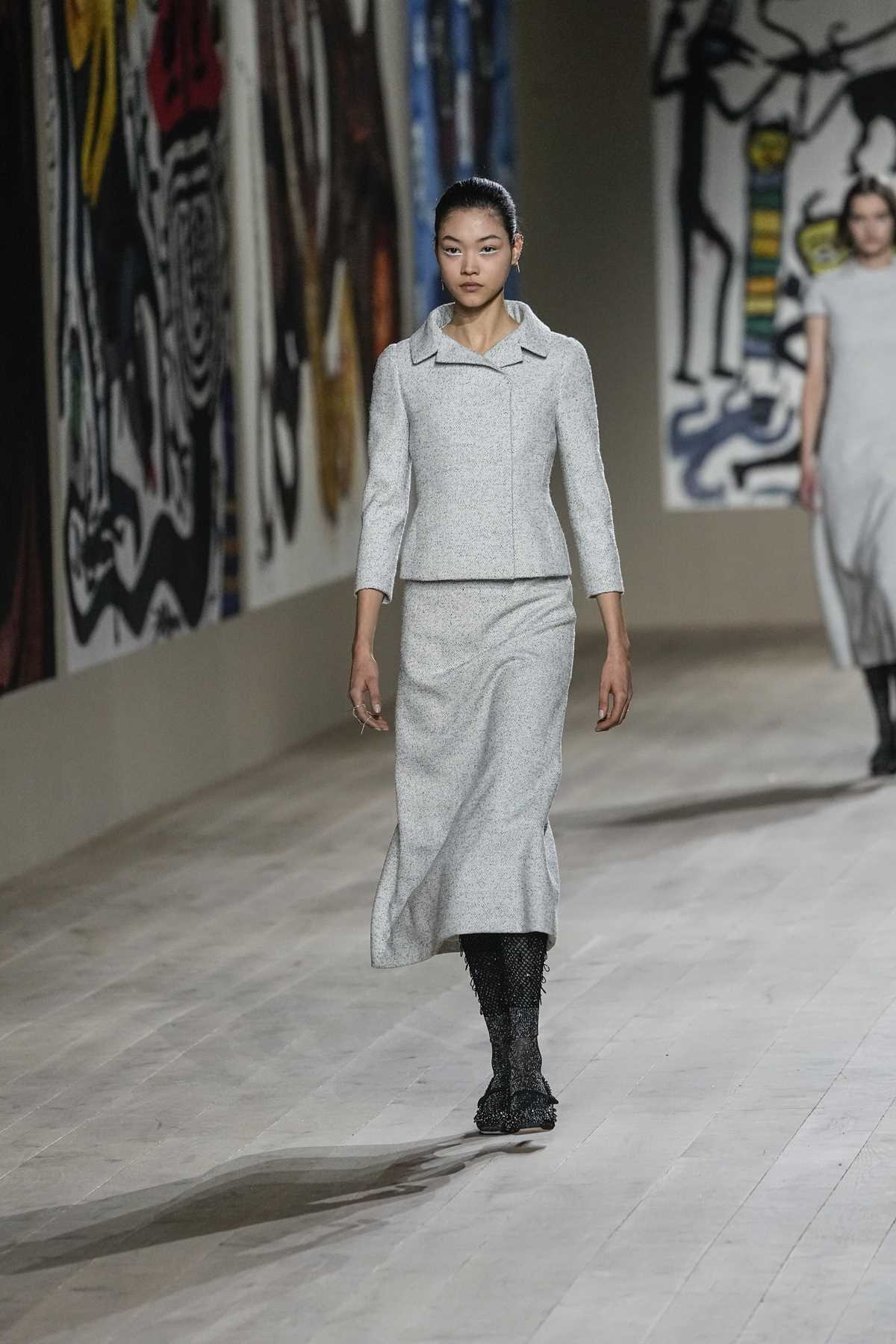 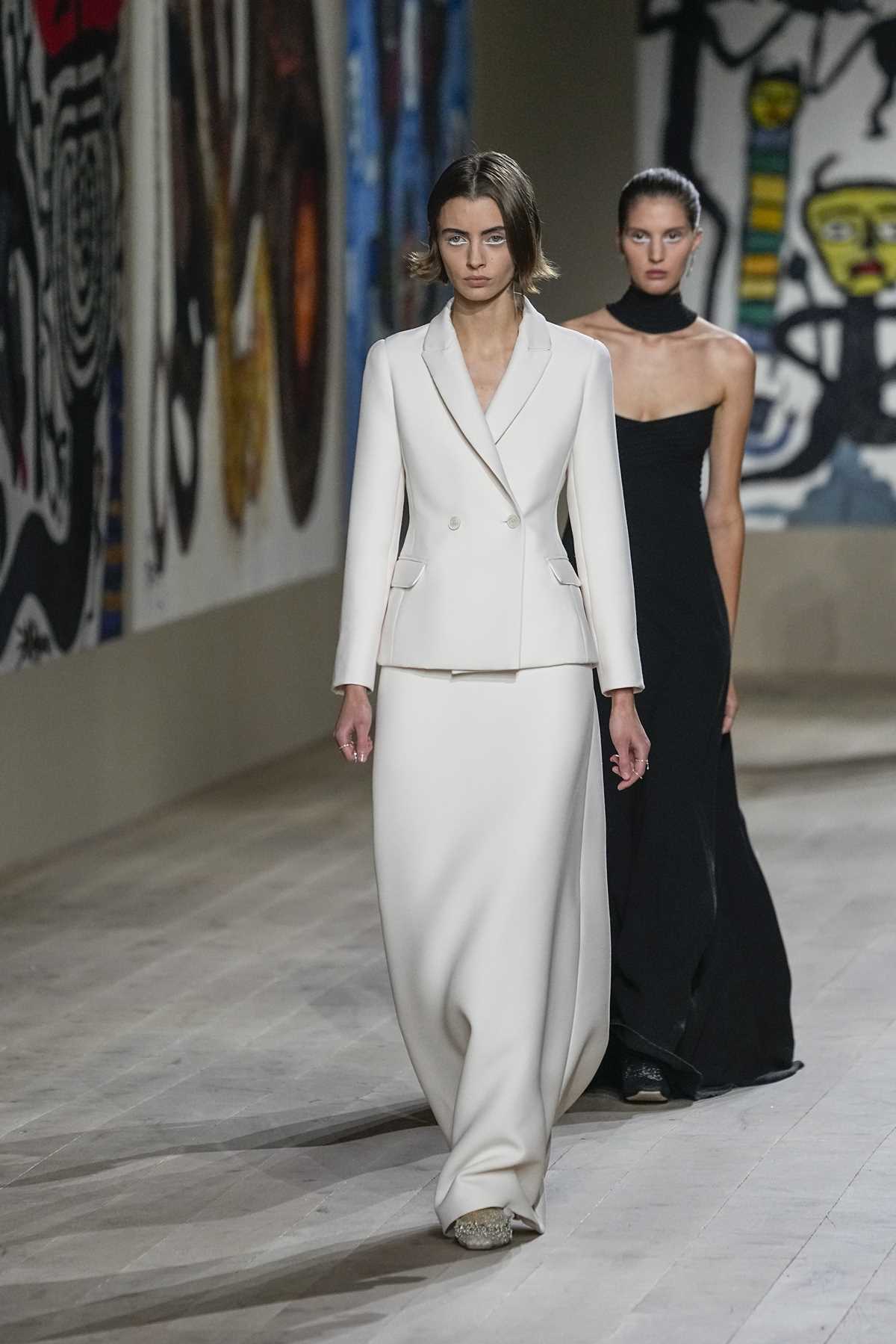 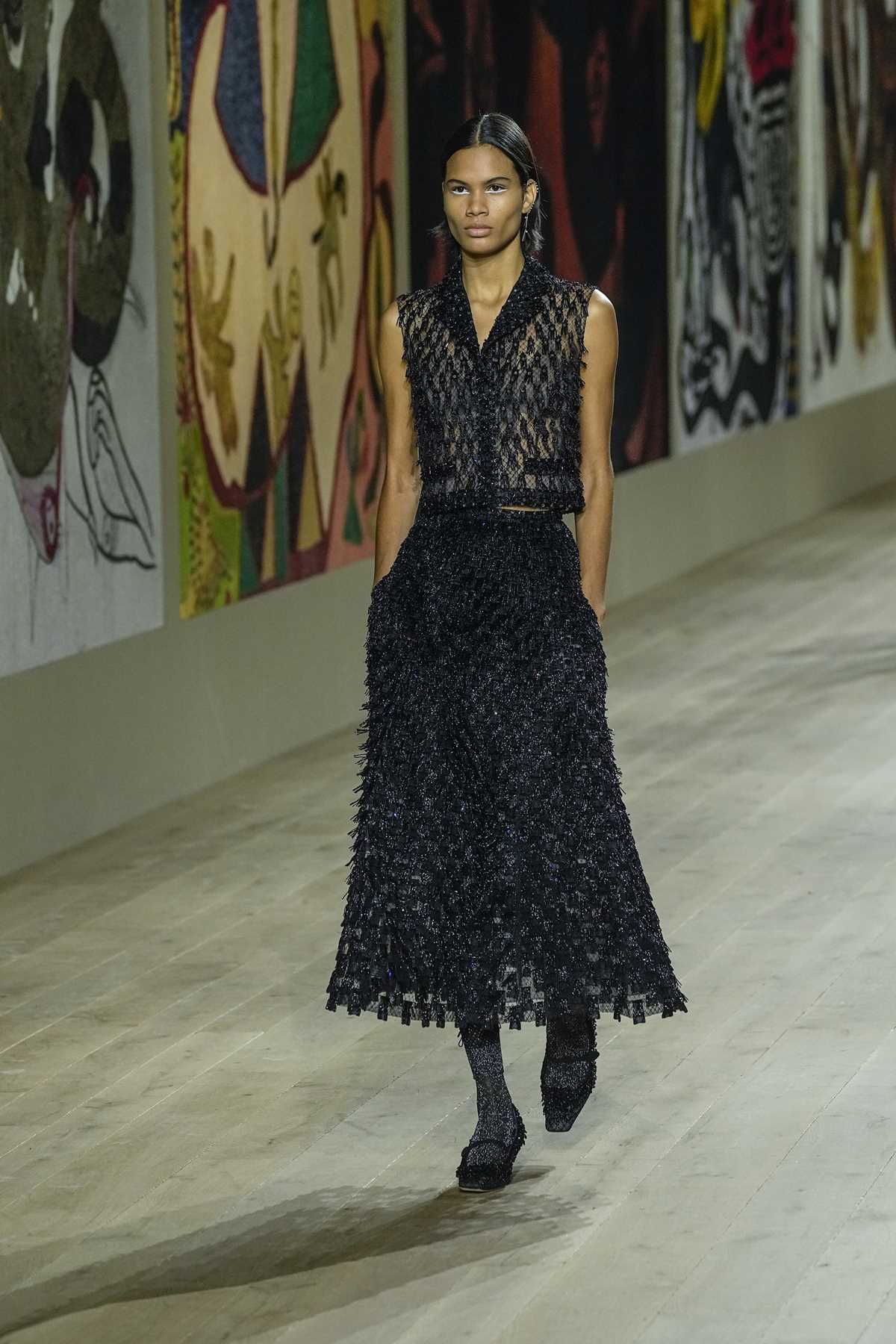 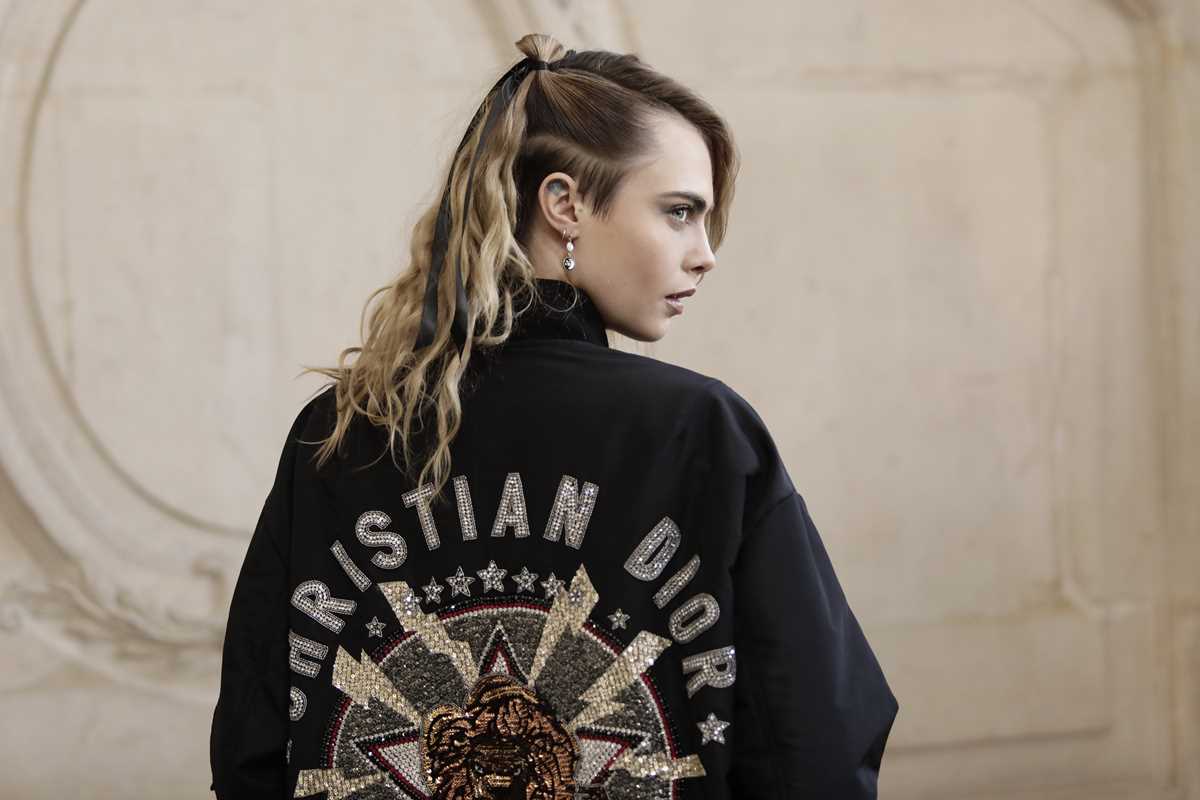 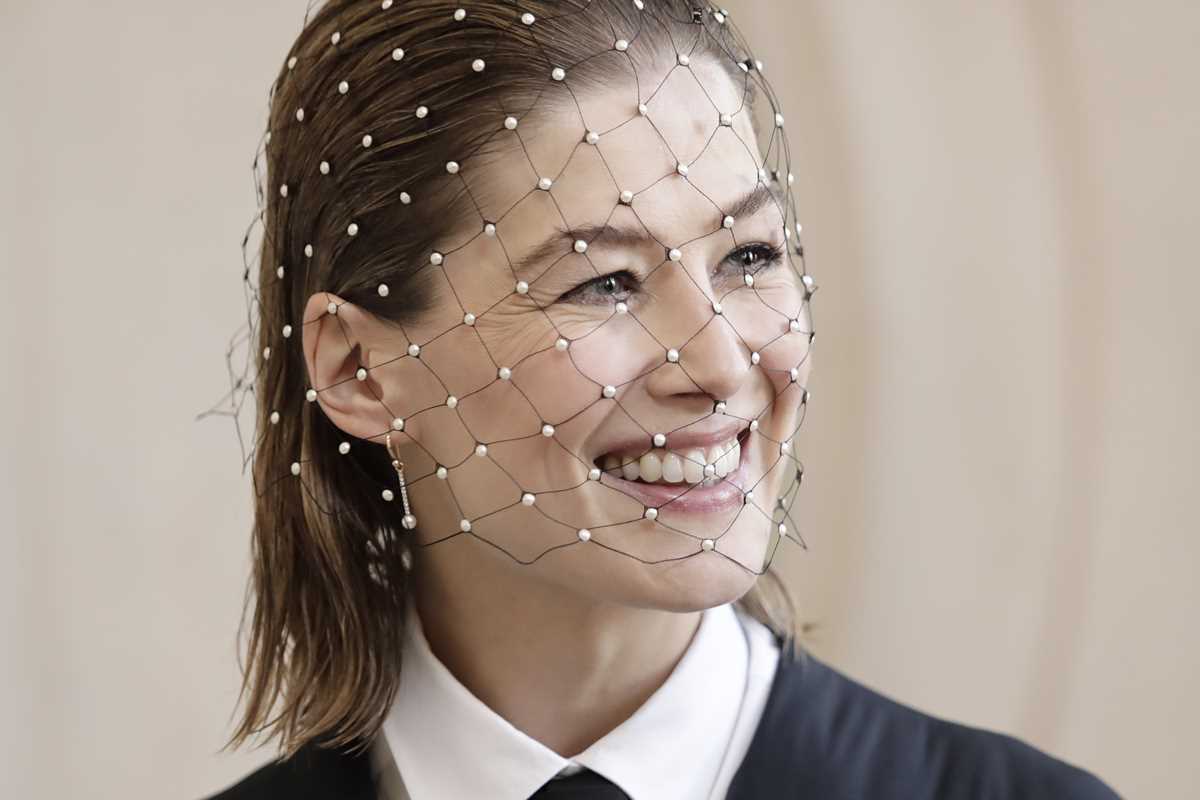 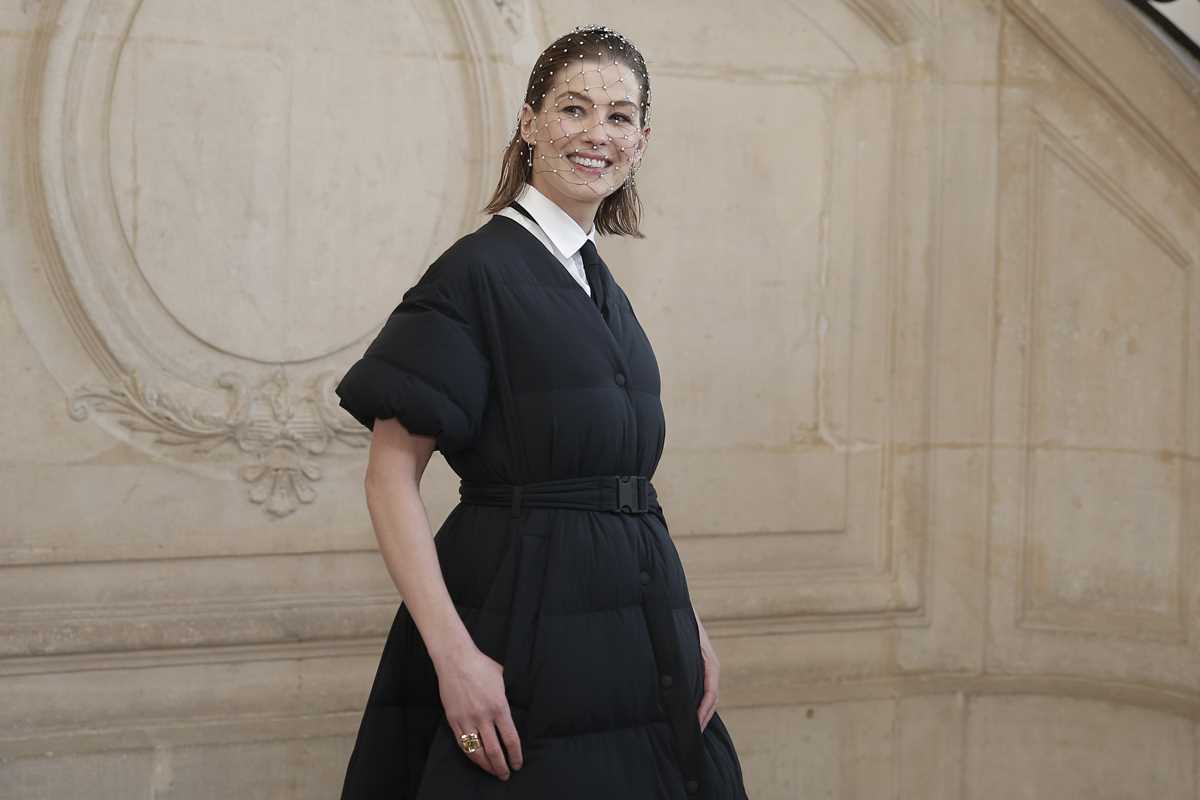 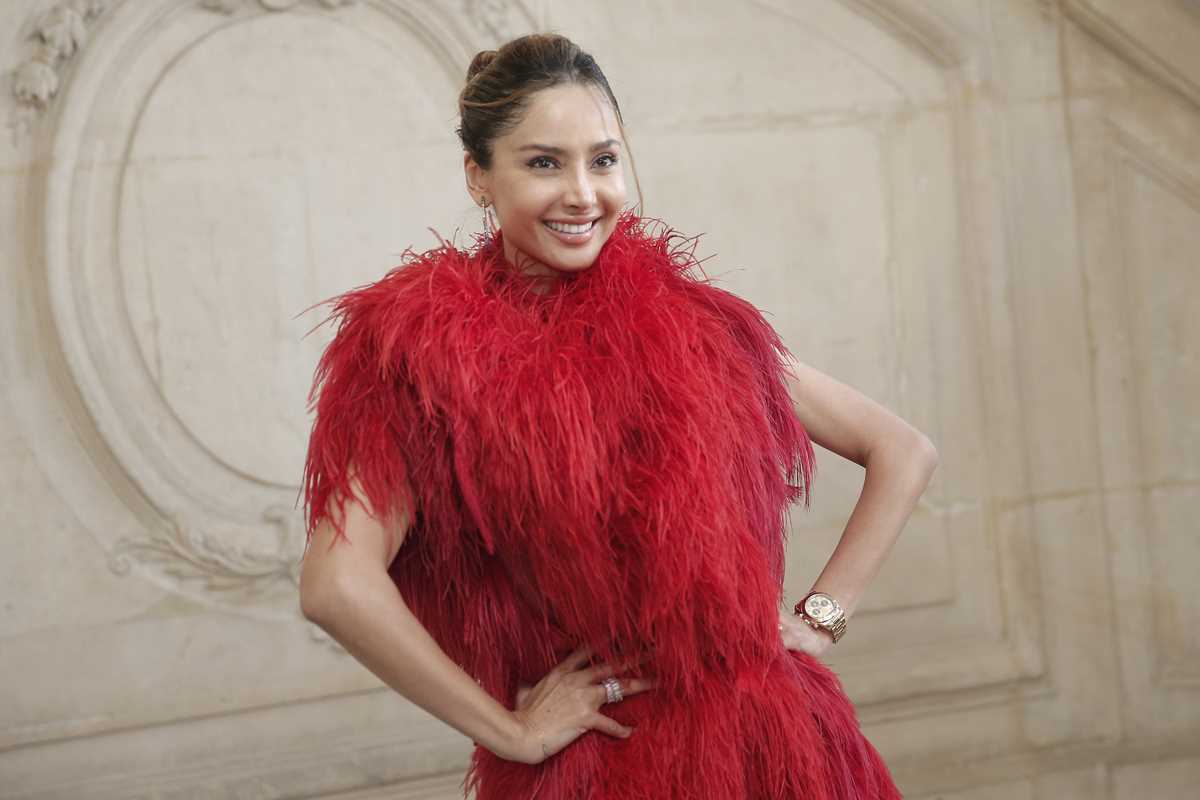 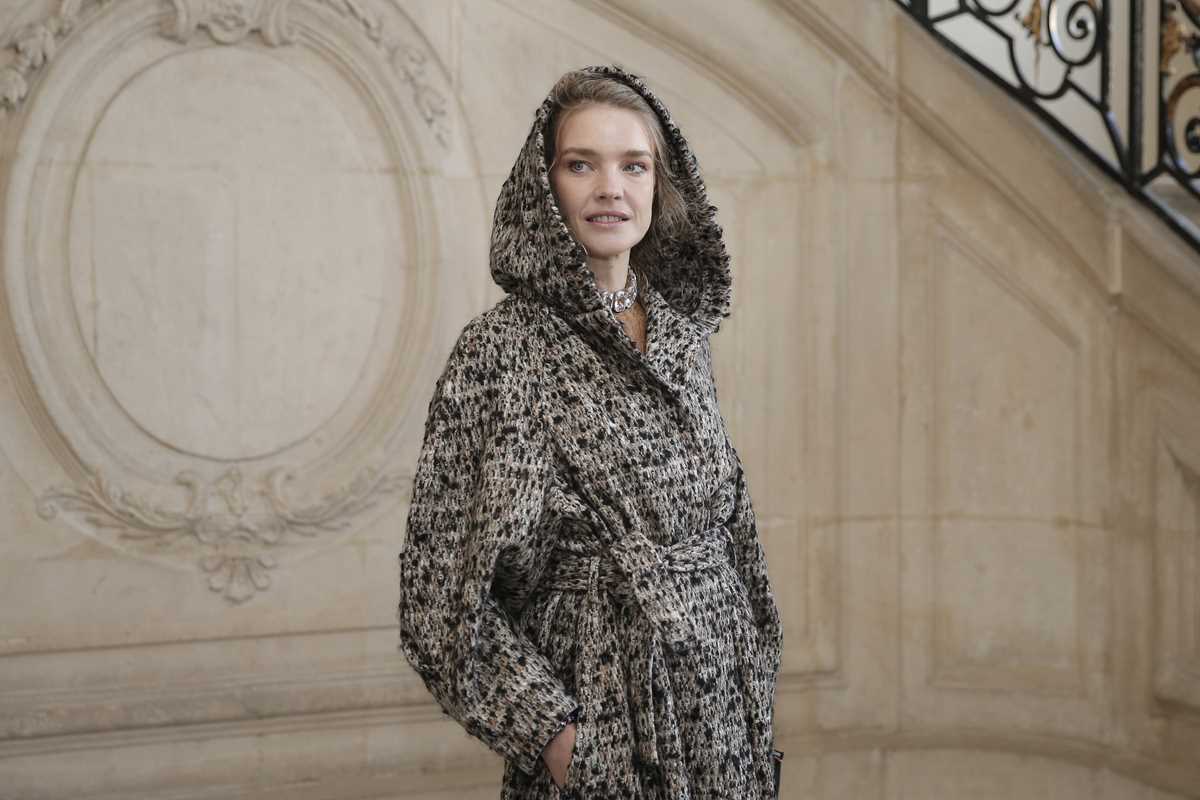 PARIS (AP) — The atelier — the workshop of hands — took the Dior center stage on Monday for a refined show on the first day of Paris couture week, which aims to elevate the work of the house’s behind-the-scenes seamstresses.

The stars came out in droves to the Musee Rodin venue, including actress Rosamund Pike and “The Crown” star Claire Foy, who posed for cameras, exclaiming: “It’s beautiful. I’m in awe.”

Another VIP in attendance, model and actress Cara Delevingne, was criticized for not donning a mask.

Here are some highlights of Monday’s spring-summer 2022 couture collections:

Designer Maria Grazia Chiuri said she wanted to demonstrate how the craft of the dozens of “petites main” seamstresses, many of whom have worked in the atelier for decades, was equally important as the art or fashion itself.

Teeming white beaded tapestry embroideries on a structured ecru wool twill coat were a case in point. Here, more than ornamenting the garment, they actually created its silhouette, which was weighty and chic. Art and craft, Chiuri was saying through the clothes, are one and the same.

An ash gray crepe skirt with a high waist seemed almost alive thanks to its myriad long embroideries that rustled and shook on the pixie-like model.

Embroidered tights were also a big theme for spring, with Dior’s army of seamstresses having gone to work in embellishing several statement pieces. Unfortunately the sheer weight of the paillette embroidering did not always cut the most flattering of shapes on some of the tights, all be them finely executed.

In style terms, there were hints of the on-trend 60s, with features such as Peter Pan collars appearing on sensuous sheer organza blouses, or neat fitted Bar silhouette tuxedo suits with bold menswear black satin lapels.

Stringent measures have been implemented across Paris Fashion Week to comply with French government guidance amid a surge of omicron-driven new infections.

COVID-19 has brought the fashion industry to its knees seeing the cancellation of countless shows, even ending entire seasons, and fashion shows are only being staged again on condition that guests show proof of vaccination and wear face masks while seated. It’s the same rule for everyone whether celebrity or journalist. France is currently registering Europe’s highest-ever daily coronavirus cases.

Actress Rosumund Pike set a fine example by carefully putting on her face mask as soon as she sat down even despite wearing an intricate couture Dior headpiece. Nearby, “The Crown” star Claire Foy also donned a mask after passing the photo call.

Model and actress Cara Delevingne, however, turned heads for all the wrong reasons: Failing to wear a mask throughout as she watched the creations from the front row.

Daniel Roseberry said of his couture collection that he wanted to respond to the “pervasive sense of exhaustion” and that “luckluster” feeling the pandemic has given many.

In particular, the Schiaparelli designer asked himself at the drawing board how the house’s signature Surrealist motifs — first espoused by the late, great Elsa Schiaparelli between the two World Wars — can be relevant in a world where reality itself was in flux.

The answer? He went up to the heavens, channeling the celestial. It was, he said, “a move towards the elemental” to understand the chaos.

This couture collection thus became the realm of the high couture priestess, one who donned exaggerated circular hat-headdresses, wore gold, black and white, and floated by gleaming and resplendent.

Gold jewelry — a specially created shade in 24K leaf — hovered around a model’s bust in all directions as if suspended by supernatural powers. Column silhouettes rose into spliced white bodices that opened up at the bust like a space-age flower, or into to a giant graphic bejeweled bib in black.

Some of the silhouettes verged on pastiche, such as jutting spikes that emanated incoherently from a model’s bust.

But the fastidious construction of many gowns — such as one with gold tentacles spilling down like a jellyfish — surely made up for it. The palatial setting — Le Petit Palais — with its myriad moldings and busts also added to the Grecian drama effect.

French fashion designer Thierry Mugler, whose dramatic designs were worn by celebrities like Madonna, Lady Gaga and Cardi B, has died at 73. The announcement on his official Instagram said he died Sunday.

A contemporary of French couturier Jean Paul Gaultier who admired his work, Mugler was known for his architectural style, defined by broad shoulders and a tiny waist. Much has been said over the years of the tensions between the two fashion greats, rumors that Gaultier has said belong to the past.

In a bittersweet message Monday, Gaultier told The Associated Press that his old acquaintance has now “gone to revamp the angels and demons up there. The sky was his color.”

“Enormous talent,” he added. “Always in search of perfection with his unique style!”