This is the free version of CWS Market Review. If you have a chance, please sign up for the premium newsletter for $20 per month or $200 for the whole year.

The stock market rose today which snapped a three-day losing streak. On Monday, the S&P 500 suffered its biggest drop in two months. At one point during the trading day, the index dropped below its 50-day moving average. That’s often a key bearish move for chart-watchers.

What’s interesting is that the S&P 500 has come close to dipping below its 50-DMA a few times. In fact, it’s gone below it as well. However, each time the index gets near the 50-DMA, it acts almost like a trampoline. Every dip has become a buying opportunity. It happened again today. 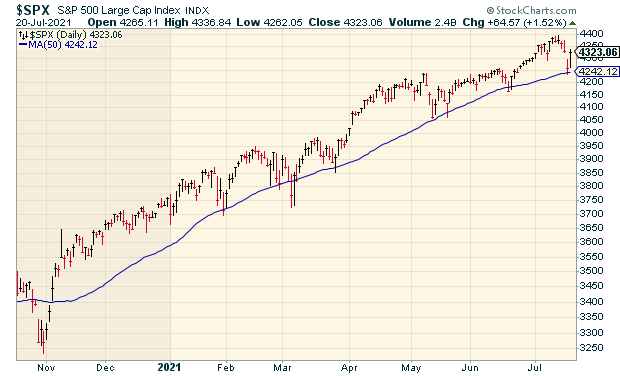 Here’s a great fact: The S&P 500 hasn’t closed below its 50-DMA on back-to-back days since October. That makes this the longest such streak in 25 years.

The takeaway is that this has been a very calm and consistently rising market. That’s why any break has gotten some attention. It’s hard to think of a market where “buy the dip” has worked so consistently.

But what’s really stood out recently has been the divergence between High Beta stocks and Low Volatility stocks. In plain English, these are stocks that move around a lot compared with the stocks that are more stable. Historically, the stable ones have done better, but the High Beta ones can be dramatic winners in a short period of time.

Since the pandemic low, the High Beta stocks have been big winners. I think that’s because of the optimism regarding the economy. Not that things are going swimmingly, but things are going better than the smart money had expected, especially since the beginning of the year.

Since early June, however, the Low Vol stocks have been making their comeback. It started out quietly, but it got very dramatic over the last four days. Monday turned into an all-out rout for the High Beta stocks.

Look at how dramatically the High Beta sector (blue line) has broken down. 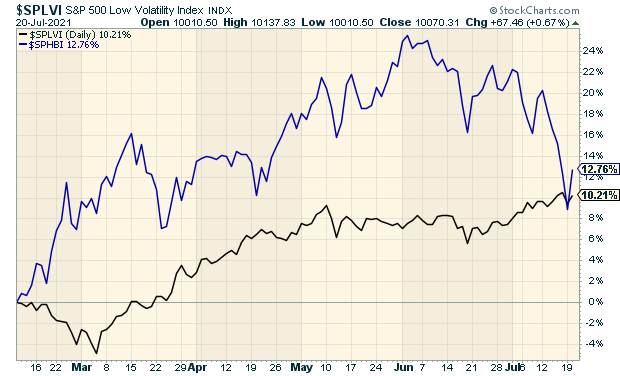 It’s funny that you can easily see that the black line is clearly less volatile.

Our Buy List isn’t exactly a Low Vol portfolio, but it leans in that direction. Quick note: When you build a portfolio—really, any portfolio—you’ll find that you’ll unintentionally skew in one direction or another. That’s just how investing is. For example, if you buy a lot of REITs or Utilities, you’ll quickly find that your portfolio is very sensitive to any interest-rate comments from the Federal Reserve.

I didn’t plan to have a Low Vol portfolio. I chose what I liked, and it turned out that the majority of our stocks bend in that direction. The good news is that we’ve outperformed the overall market significantly over the past few days.

The shift to Low Vol has been too big to ignore. It’s not just a little bump like we’ve seen before. I think this could be the turning point for this cycle. Unfortunately, pinpointing the starting or ending points of market cycles is a notoriously difficult task. This earnings season will probably tell us a lot more where we stand. We have two Buy List earnings reports later this week, and 13 more coming next week. I suspect that Low Vol will continue to lead.

Nearing the Top in the Presidential Election Cycle

That’s not the only cycle to watch. Circle your calendars for August 4. Why? Because that’s been the traditional peak in the four-year market cycle.

I took all of the daily closes of the Dow Jones Industrial Average going back to its beginning 125 years ago. I then crunched what the average four-year cycle looks like. I found that the market peaks on August 4 of the post-election year.

Here’s what the cycle looks like. I started the line at 100 at the beginning of the post-election year. 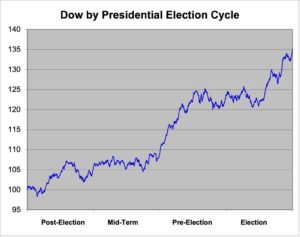 This mini-bear market lasts for about 14 months, until September 30 of the mid-term year. Over that time, the market loses about 2.58%. That may not seem like a lot—and it’s not—but for a 14-month segment in a 125-year data series, it stands out.

Let me be clear: I don’t put faith in these types of stats. I think they’re interesting in a general sense. I would never make a market decision based on this.

Still, it’s interesting that incumbent presidents have probably had an effect on the stock markets. They work to make the economy peak by election day. The rally lasts for a few months before it stalls out. The market eventually bottoms around the mid-term elections. One of the best things about being a long-term investor is that you don’t have to worry about such things.

Don’t forget to sign up for our premium newsletter. It’s just $20 per month or $200 for a full year. With earnings season coming up, you don’t want to miss out!

The Shortest Recession Ever!

This National Bureau for Economic Research (NBER) is considered to be the industry standard in economics for dating economic recessions and expansions. They already told us that the economy went into recession in March 2020 (duh).

We had been waiting for the official word on when the recession ended. This week, NBER said the economy bottomed in April 2020. That means it was just a two-month recession. That’s the fastest one on record. NBER lists all the economic cycles going back to 1854.

The previous record for fastest recession was a six-month recession during the first half of 1980. That was a generally chaotic time for the U.S. economy.

You often hear in the media that a recession is two or more consecutive quarters of negative GDP growth. That’s a good ballpark definition of a recession, but it’s not precisely correct.

This is the official policy from NBER. (My apologies for the econo-speak).

In determining the dates of business cycle turning points, the committee follows standard procedures to assure continuity in the chronology. Because a recession must influence the economy broadly and not be confined to one sector, the committee emphasizes economy-wide measures of economic activity. It views real gross domestic product (GDP) as the single best measure of aggregate economic activity. This concept is measured two ways by the US Bureau of Economic Analysis (BEA)—from the expenditure side and from the income side. Because the two measures have strengths and weaknesses and differ by a statistical discrepancy, the committee considers real GDP and real gross domestic income (GDI) on an equal footing. It also places considerable weight on total payroll employment as measured by the Bureau of Labor Statistics (BLS).

Basically, real GDP is the best. The problem is that that’s quarterly data so the committee uses monthly data like nonfarm payrolls to fill in the gaps.

In March and April 2020, the U.S. economy lost 22 million jobs. Since then, we’ve added back over 15 million. We’re still a long way from full employment, but I don’t see any recession on the horizon.

A few weeks ago, I highlighted Mueller Industries (MLI) for you. At the time, I said “Keep an eye on Mueller. This could be a big winner in the months ahead.” The shares jumped nearly 7% today thanks to a great earnings report.

One of the reasons why I like Mueller, other than being a great company, is that it’s mostly ignored by Wall Street. Mueller is a leading manufacturer of copper, brass, aluminum and plastic products. This is a classic small-cap cyclical stock. Once you realize the scope of their business, you understand that the use of Mueller’s products is seemingly endless. Mueller makes everything from copper tubing and fittings to brass and copper alloy bars and refrigeration valves.

You can find Mueller most anywhere. Some of the companies that rely on Mueller are in sectors like plumbing, heating, air conditioning, refrigeration, appliance, medical, automotive, military and defense, marine and recreational. Mueller’s operations are located throughout the United States and in Canada, Mexico, Great Britain, South Korea, and China.

Over the last 30 years, MLI has gained more than 110-fold (including dividends). 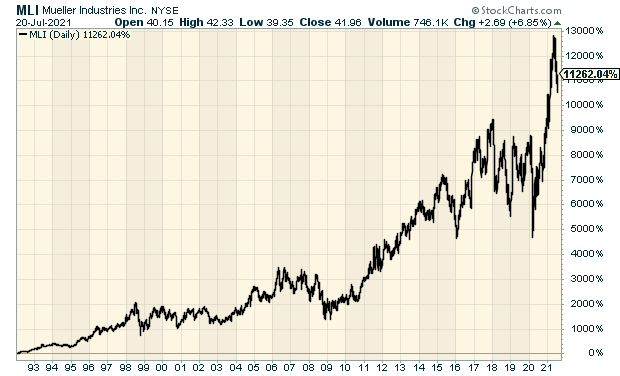 This morning, Mueller reported Q2 earnings of $1.92 per share. That’s up from 50 cents for last year’s Q2. How does that compare with Wall Street’s consensus? Well, that’s hard to say because no analysts currently provide earnings estimates. Given the market’s strong reaction, we can probably assume that it was much better than expected.

It’s pretty amazing that a company that’s been around for over 100 years and has gained more than 100-fold in 30 years is virtually ignored by Wall Street. I’ll reiterate what I said before, keep an eye on Mueller. This can be a big winner for investors.

That’s all for now. I’ll have more for you in the next issue of CWS Market Review.

Don’t forget to sign up for our premium newsletter. It’s full of news and analysis on our Buy List portfolio. Also, if you sign up now, you can see our two recent reports. “Your Handy Guide to Stock Orders” tells you about all the different types of stock orders investors can place. Also, there’s “How Not to Get Screwed on Your Mortgage.” Join us today!