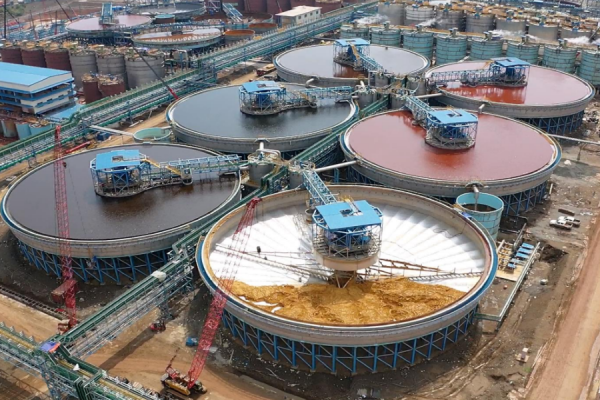 A recent thirst for commodities of all types has driven up prices across the board these last six months, with metals like cobalt, copper, nickel and lithium getting a charge from booming demand for electric vehicle (EV) batteries. That demand has driven up cobalt prices more than 60% alone over that time, with copper up a more modest 7.5%.

Those gains have played nicely to the somewhat misleadingly named China Molybdenum Co. Ltd. (CMOC) (3993.HK; 603993.SH), whose leading business is actually cobalt and copper mining. The company’s profit soared by 119% to 5.11 billion yuan ($803 million) last year, as revenue grew 53.9% to 173.9 billion yuan, both record highs, according to its annual results released on Sunday.

CMOC, which is in the process of changing its name to CMOC Group Ltd. to better reflect its current business, credited both rising copper and cobalt prices, along with its own effective cost controls, for its good performance last year. In addition to the large profit rise, its average return on net assets increased to 12.93% from 5.83%.

Last Wednesday, the same day the company released some preliminary full-year financials, China’s State Council announced it would continue to support efforts by the nation’s companies to list abroad and called on financial institutions to support the development of the real economy. CMOC’s stock surged by 13% that day amid a wider market rally, and rose another 10% the next day. The two-day surge left the stock at HK$3.82, still 43% below its recent high of HK$6.68 reached last August.

But CMOC wasn’t done with the upbeat news just yet. Last Thursday it announced that to meet its operational needs and lower financing costs, it planned to issue up to 10 billion yuan worth of bonds to trade on the Shanghai Stock Exchange. It added that some of the money raised would be used to buy back shares and award employee stock incentives.

The company now boasts a price-to-earnings (P/E) ratio of around 13 times, relatively high for a traditional resources company. Jinchuan Group (2362.HK), whose business most resembles CMOC’s, has also benefited from rising commodity prices and has an even higher P/E ratio of about 15 times. Average P/E ratios for other peers are even higher at around 17 times, perhaps explaining CMOC’s decision to buy back shares due to its relatively lower valuation.

CMOC’s good financial performances doesn’t come as a big surprise given its other recent favorable results and the sizable rises in copper and cobalt prices in recent months, said Kenny Wen, a commentator at Everbright Sun Hung Kai Co. Ltd.

“The prices of copper, cobalt and nickel will remain at high levels thanks to the greater demand for EV batteries, which has been a boon for the company’s business performance this year as well,” Wen said.

Dickie Wong, executive director of research at Kingston Securities Ltd. pointed out that demand has been voracious for lithium and cobalt from manufacturers of both traditional car and EV batteries. Accordingly, he believes CMOC stock could rise further. But he also warned of political risks that could come if some countries classify cobalt as a strategically important resource, which could affect CMOC’s future ability to acquire new cobalt mining projects.

As competition for new cobalt projects heats up worldwide, CMOC has encountered some obstacles with one of its main mining assets in the mineral-rich Democratic Republic of Congo (DRC).

Chinese companies have been quite active in the country over the last decade, splurging lavishly to purchase cobalt resources. In 2016 CMOC spent $2.65 billion to buy the TFM copper and cobalt mine from Freeport-McMoRan Inc., and subsequently bought a 95% stake in the Kisanfu copper and cobalt mine in 2018 for $550 million. That rapid succession of moves speaks to its insatiable hunger for cobalt resources.

The company’s interim financial report last year put its operating revenues from the DRC at 6.06 billion yuan, accounting for over half of its total mineral exploration and processing revenues. Those assets yielded a gross margin of 50.5%, much higher than its margins in any other markets. The lucrative nature of its business there has convinced the company to vigorously expand its local production.

The DRC has some of the world’s biggest cobalt reserves, with its output representing 70% of last year’s global total. The country’s leaders have also noticed this growing demand, recognizing cobalt’s significance as a revenue source. With that in mind, the government established a committee last year to evaluate Chinese companies’ holdings of local mines and related transactions.

U.S. President Joe Biden is also eager to secure an edge over other countries in its access to cobalt resources, and this year sent a delegation to meet with DRC officials. U.S. deputy national security advisor Daleep Singh has also castigated Chinese companies for the lack of transparency in their DRC mining contracts.

What’s more, a DRC court ruled earlier this month that CMOC temporarily suspended operations at the TFM mine for half a year after state-owned company Gecamines SA, which holds 20% of the project, accused the Chinese company of evading millions of dollars in royalty payments by underreporting its reserves. According to a Wall Street Journal report, CMOC has offered to settle the matter, but progress has been glacially slow.

With the EV sector expected to continue developing rapidly, cobalt resources are likely to continue being in short supply and will increasingly be regarded as a strategically important resource by big powers. Countries will be jockeying for control of more such resources by hook or by crook.

Accordingly, Chinese companies should expect more obstructions as they attempt to buy more mines and expand production in Africa, especially as the U.S. and China remain locked in political tensions. All that said, investors might want to look beyond CMOC’s latest healthy profit increase by carefully noting political risks the company will face in the coming years.

This article was submitted by an external contributor and may not represent the views and opinions of Benzinga.