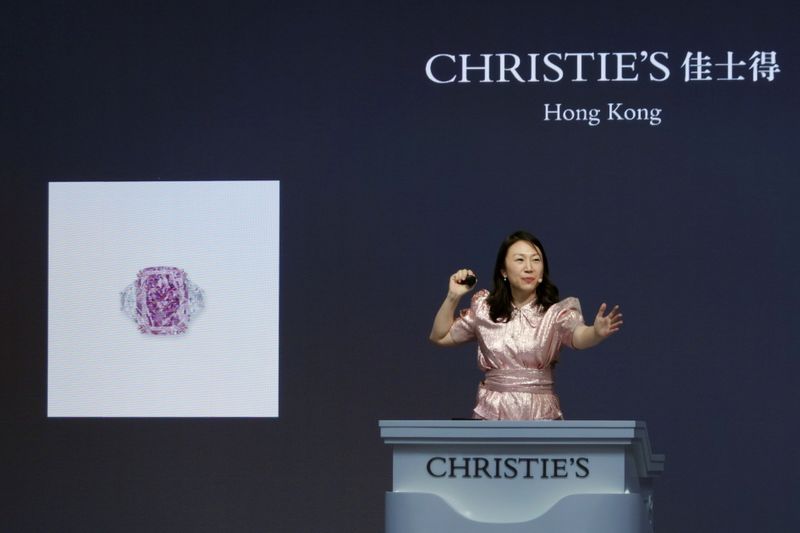 HONG KONG (Reuters) – British auction house Christie’s said on Tuesday it plans to expand its physical presence in Hong Kong by 2024 with galleries and salerooms more than four times larger than it currently has, betting on a growing art market in the finance hub and in Asia.

It will become the first anchor tenant in a new skyscraper in central Hong Kong, leasing a total of 50,000 square foot over four floors. The building, designed by Zaha Hadid Architects and developed by Henderson Land (OTC:), is due for completion in 2023.

“It’s hard for us to extend the sales because we don’t have the real estate to do so,” Belin said. Christie’s currently has to rent outside venues to hold large auctions and exhibitions.

At its future headquarters, the auction house will be able to hold around six major all-week auction events a year, compared to only two currently that fall in Hong Kong’s spring and autumn, he said.

Christie’s $458 million in sales recorded in Hong Kong in May was the highest since 2013 and came as the financial hub recovered from a COVID-induced economic contraction last year.

“Hong Kong is the art centre,” Belin said. “Nothing has dented the confidence in the art market here.”

GlobalData’s Wealth Market Analytics expects the population of high net worth investors with liquid asset above $1 million in Hong Kong to rebound in 2021, and grow 12% to reach 243,320 individuals this year from 217,300 in pandemic-hit 2020. Hong Kong has a population of 7.5 million.

Belin said the expansion would not lead to aggressive hiring in addition to their 200 staff in Hong Kong. Christie’s is also looking for bigger space to relocate in Shanghai.

Christie’s became the first major auction house to sell a digital artpiece that does not exist in physical form in March.

The artwork carried what is known as a Non-Fungible Token (NFT), a unique digital token encrypted with the artist’s signature and which verifies its ownership and authenticity and is permanently attached to the piece.

Christie’s sold close to $100 million of digital artwork in the first half of 2021, and Belin said such sales are bringing new and younger collectors to the auction house.