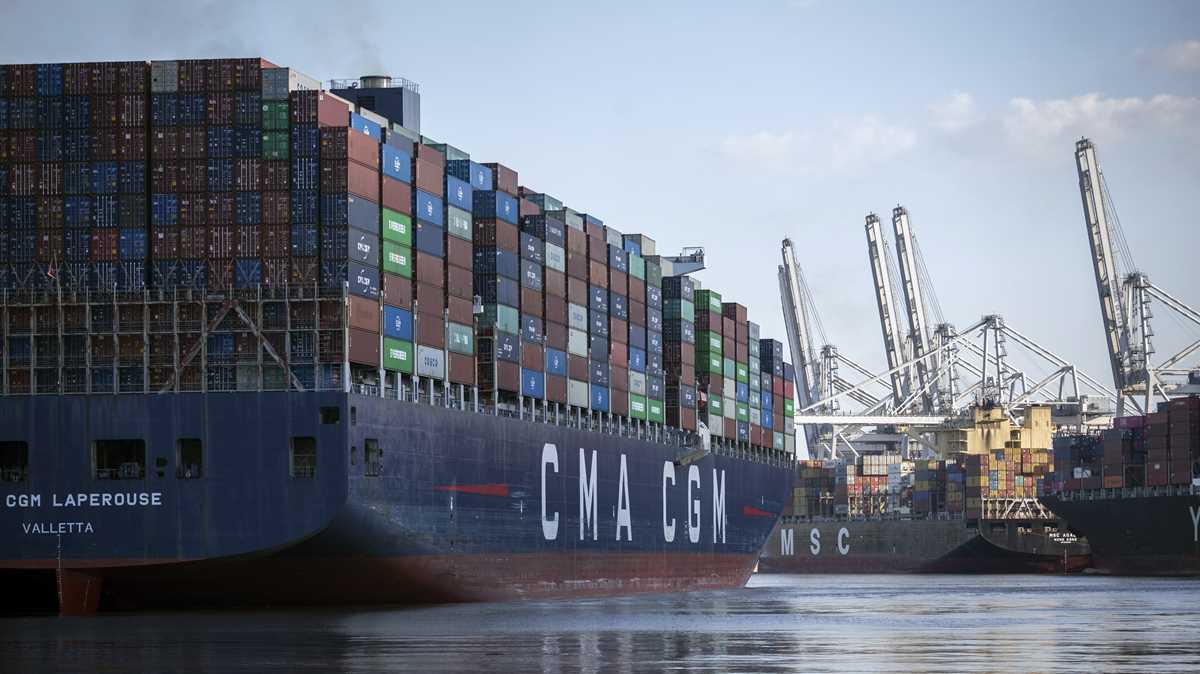 The container ship CMA CGM Laperouse, left, docks at the Georgia Ports Authority’s Port of Savannah, Sept. 29, 2021, in Savannah, Ga. The Port of Savannah saw a whopping 20% increase in shipping containers moving across its docks in 2021 as U.S. seaports scrambled to keep up with a surge in cargo that crammed container yards and forced ships to line up and wait at sea. The Georgia Ports Authority reported Tuesday, Jan. 25, 2022 that Savannah’s port handled a record 5.6 million container units of imports and exports last year _ an increase of 1 million container units from the 2020 calendar year. (AP Photo/Stephen B. Morton, file)

SAVANNAH, Ga. (AP) — The Port of Savannah saw a whopping 20% increase in shipping containers moving across its docks in 2021 as U.S. seaports scrambled to keep up with a surge in cargo that crammed container yards and forced ships to line up and wait at sea.

The crush of cargo brought record volumes to Savannah during all 12 months of last year. As the economy rebounded from the coronavirus pandemic, retailers rushed to refill inventories and kept ordering to ensure shelves stayed stocked while online shopping also continued to grow, said Griff Lynch, executive director of the Georgia Ports Authority.

“It literally is three to four years of growth in one year,” Lynch said. He added: “It didn’t come out without pain.”

Savannah has the fourth-busiest U.S. seaport for cargo shipped in containers — giant metal boxes that can be easily loaded onto ships, trucks and trains to transport retail goods ranging from consumer electronics to frozen chickens.

The spike in trade caused shipping traffic jams at Savannah last fall, when as many as 25 ships at a time waited off the Georgia coast while up to 85,000 containers piled up on the terminal awaiting transport.

The port authority added workers and new equipment, and the agency set up inland sites to temporarily store cargo and free up space at Savannah’s container terminal. The agency won approval from the federal government to use $8 million in leftover grant money to set up four such “pop up” container yards in different areas of the state.

Lynch said the port’s container yard remains largely full, but only one ship was anchored offshore waiting to come into port.

In December, the port authority agreed to accelerate a $150 million expansion at the Savannah port with an aim to increase by 25% Savannah’s capacity for cargo containers by June. The plan includes converting 150 acres (60 hectares) of undeveloped land for container storage, as well as spending $24.4 million on new electric-powered cranes to lift and move containers in that new space.

Lynch said the outlook for 2022 remains uncertain. He expects strong cargo volumes to continue in the first quarter, but said some forecasts predict a slowdown driven by inflation later in the year.

Meanwhile, a $973 million deepening of the Savannah River shipping channel that connects the port to the Atlantic Ocean should be completed by March, Lynch said. Begun in 2015, the dredging project will allow larger ships carrying heavier loads to reach the port without waiting for higher tides.