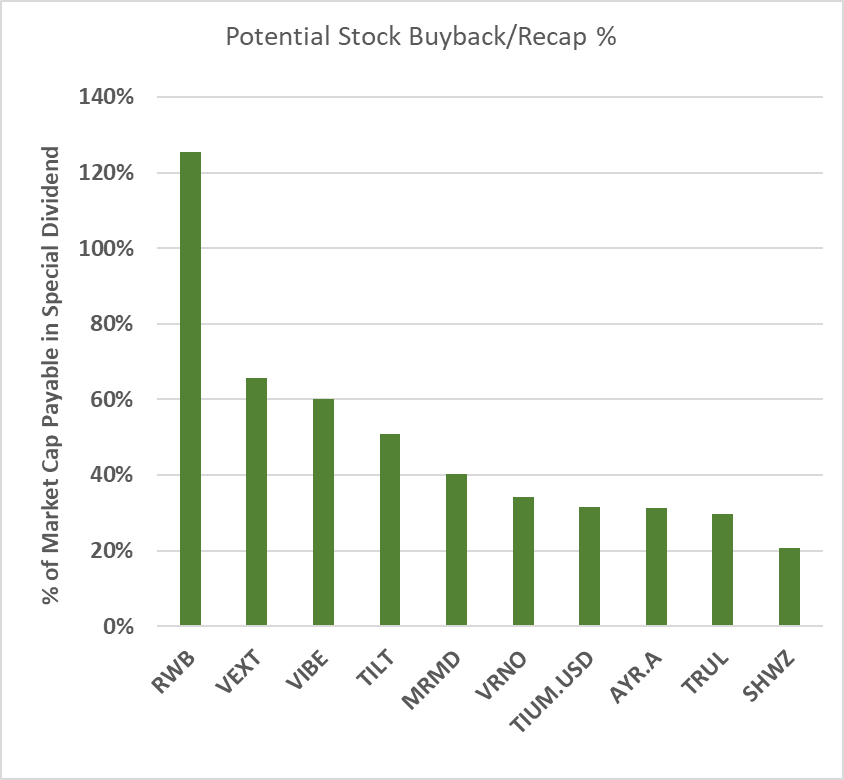 Neither Curaleaf nor its subsidiaries will guarantee the debt, which will only be by recourse to the equity and assets of Bloom.

This transaction begs the question:  are any public cannabis companies potential LBO or Recap candidates?

We are mindful of the cash flow issues that U.S. Cultivation & Retail sector companies operate under – especially 280e.  We estimate that given this extra tax burden, most firms can only safely carry about 3x EBITDA in debt:  $1 of EBITDA that is subject  to a 30% tax rate, and a 2x interest coverage ratio,  and a 12% interest rate debt gives a total supportable debt of $2.92.

The graph shows the percentage of market cap that could be payable to shareholders after leveraging the firm to 3x 2022 consensus EBITDA estimates.  The values in the chart take 3x 2022 EBITDA less existing debt divided by current market cap.

The screen was run on the 28 U.S. Cultivation & Retail companies in the Viridian Value Tracker Database with analyst estimates for 2022 EBITDA.  The chart shows the top 10 companies in declining order of  % possible dividend.

The ability of Acreage Holdings (OTC: ACRHF) and Glass House Brands (OTC:GLASF), which the Viridian Capital Advisors Credit Tracker ranking system views as significantly weaker credits, to issue debt with no or little equity linkage is somewhat more surprising but explainable. The key is that in a credit market starving for yield, the Glass House issue is priced at 890 basis points over treasuries, nearly 200 basis points wide to the B of A CCC high yield index. Investors are being paid a sizeable premium for taking cannabis risks. We believe the top-tier cannabis credits are better than CCC.

Note: due to the conservative level of leverage used, only one company in our database Red White & Bloom (CSE:RWB) (OTCQX:RWYBF) appears to be trading low enough for a full buyout.  Several other companies, however, appear to be capable of repurchasing a significant portion of their outstanding equity.

AYR Wellness is the only company on the list that publicly announced a share repurchase program.  The others on the chart appear to be candidates.

Seventeen other companies in our database do not have analyst estimates but may be potential candidates.  Partial recaps may also be an attractive alternative means of providing cash to owners in private companies.

The combination of languishing stock prices and more available and lower-cost debt could lead the cannabis industry in a direction few of us would have expected a year ago.

The Viridian Cannabis Deal Tracker provides the market intelligence that cannabis companies, investors, and acquirers utilize to make informed decisions regarding capital allocation and M&A strategy. The Deal Tracker is a proprietary information service that monitors capital raise and M&A activity in the legal cannabis and hemp industry. Each week the Tracker aggregates and analyzes all closed deals and segments each according to key metrics:

Industry Sector (one of 12 sectors, from Cultivation to Brands)

Dollar value of the transaction

Region in which the deal occurred (country or U.S. state)

Status of the company announcing the transaction (Public vs. Private)

Since its inception in 2015, the Viridian Cannabis Deal Tracker has tracked and analyzed more than 2,500 capital raises and 1,000 M&A transactions totaling over $50 billion in aggregate value.

The preceding article is from one of our external contributors. It does not represent the opinion of Benzinga and has not been edited.