Why It Matters: A normalized supply chain could mitigate inflationary forces in 2022, according to the testimony of the U.S. Federal Reserve Chair Jerome Powell at his confirmation hearing Tuesday. The central banker said that the era of low-interest rates is likely to stay.

“We have been and probably remain in an era of very low interest rates.”

Cryptocurrencies have been volatile since mid-December after Federal Open Market Committee minutes gave rise to indications that 2022 would see 3 rate hikes.

“The path of inflation may drive quicker rate hikes and a sooner start to shrinking the balance sheet and that could be bearish short-term for risk assets such as cryptos, but equities will likely feel more pain,” said Moya, in an emailed note.

A key indicator, the Spent Out Profit Ratio — which gives traders insight into profit and losses over a particular time period, has slipped below 1. 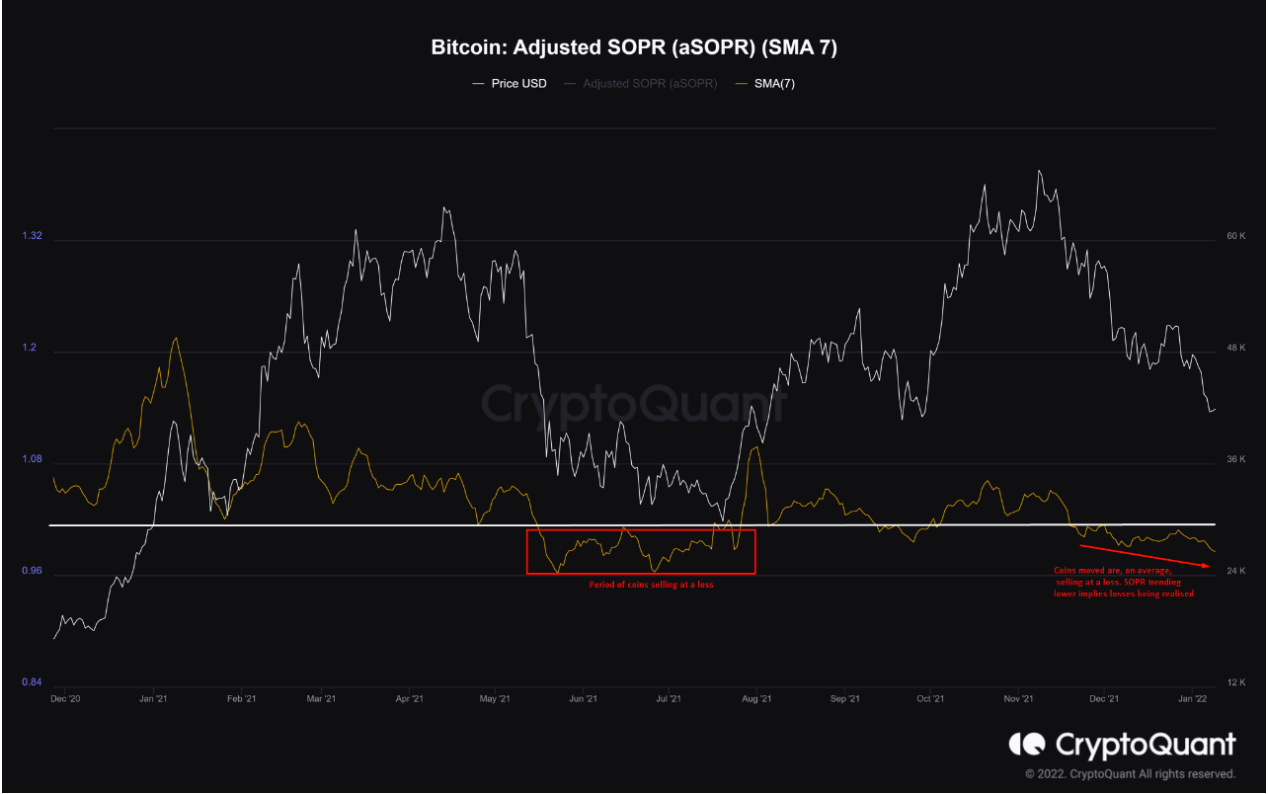 This is a sign that on average Bitcoins moved on a day were sold at a loss, according to CryptoQuant analyst Maartunn. The analyst said similar behavior was seen in May when the market kept selling at a loss for an extended period of time.

CEO of Singapore-based Three Arrow Capitals, Zhu Su, tweeted a chart tracking Bitcoin’s entity-adjusted dormancy flow. This metric is the ratio of the current market capitalization and the annualized dormancy value as measured in dollars. It can be used to determine bullish or bearish trends for the apex coin.

There are moneybags waiting to come into Bitcoin, but they are waiting for risk to abate, according to OANDA’s Moya.

“There is still significant money on the sideline waiting to buy Bitcoin, but many crypto traders are having a wait-and-see approach to see if some potential death cross patterns trigger a major selloff.”

Meanwhile, gas used in GWEI per transaction rose to 188, which is the highest level since October 27, according to a tweet by the financial market data and content platform Santiment.

Santiment noted that while the average fees in dollars are “more modest” they too are beginning to rise.

#Ethereum‘s price dipped to $2.93k Tuesday, and gas used in #GWEI per transaction spiked up to 188, the highest level since October 27th. Average fees (in USD) are more modest, but beginning to rise, currently sitting at $23 per transaction.  https://t.co/fW3me9fgyq pic.twitter.com/sRotORxR1E