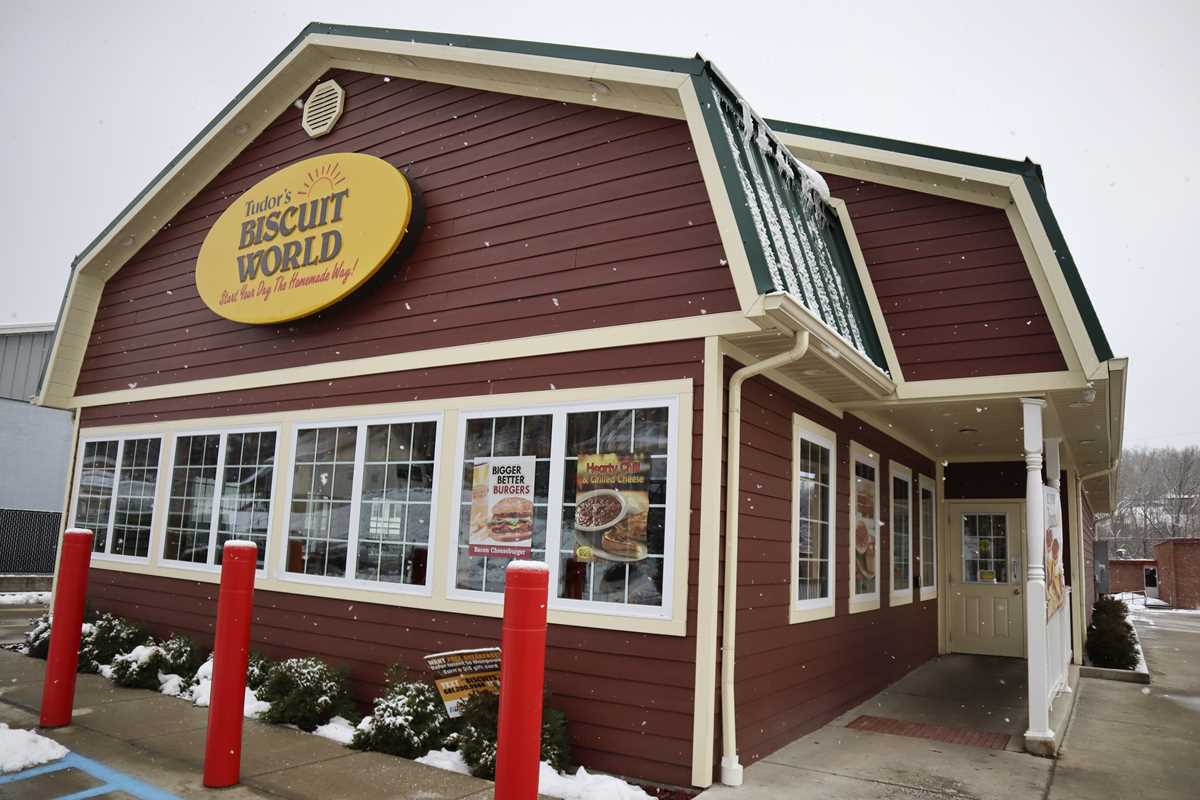 This Jan. 20, 2022 photo shows the Tudor’s Biscuit World in Elkview, W.Va. Employees at the Elkview, W.Va., restaurant have already case ballots to decide whether or not they want to create a union. The votes will be read Tuesday. (AP Photo/Leah M. Willingham) 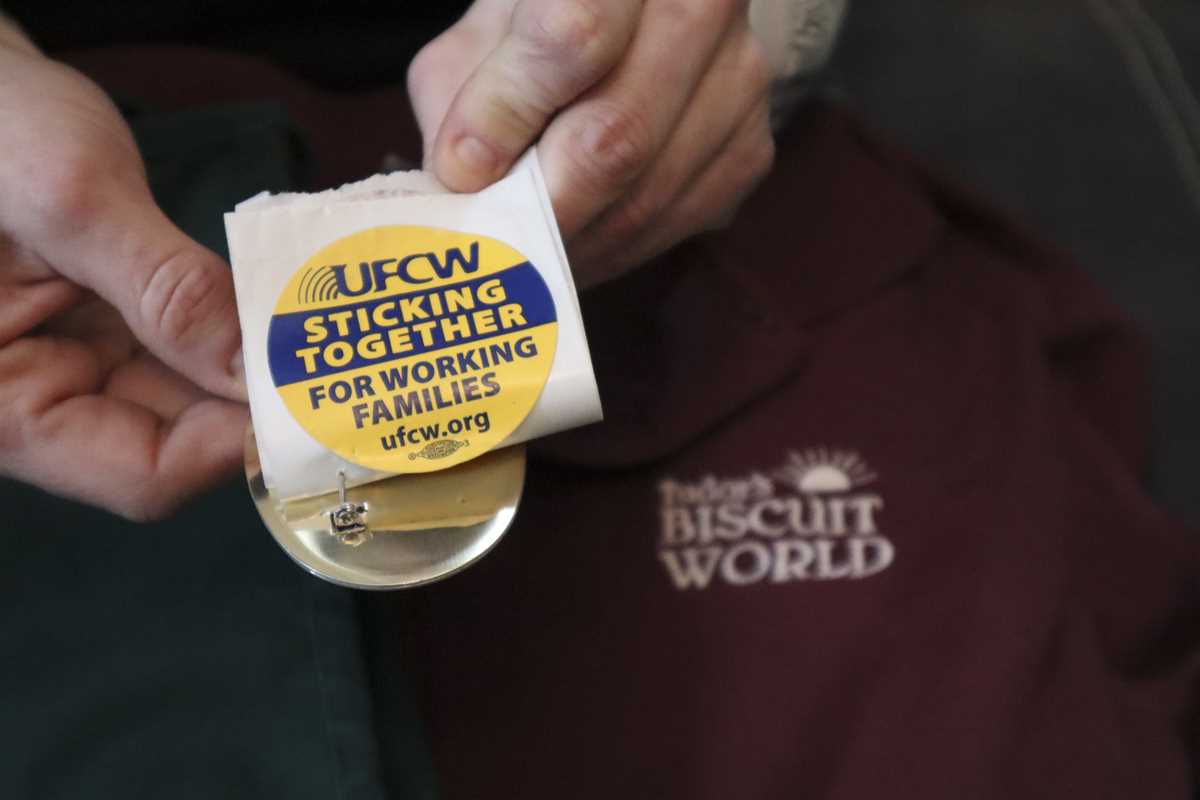 Former Tudor’s Biscuit World employee Jennifer Patton hold stickers displaying the logo of the United Food & Commercial Workers Local 400 union at her coworker’s home in Elkview, W.Va., on Jan. 20, 2022. Patton said she was retaliated against and fired by management after she joined efforts to unionize the restaurant. Employees at the Elkview, W.Va., restaurant have already case ballots to decide whether or not they want to create a union. The votes will be read Tuesday. (AP Photo/Leah M. Willingham) 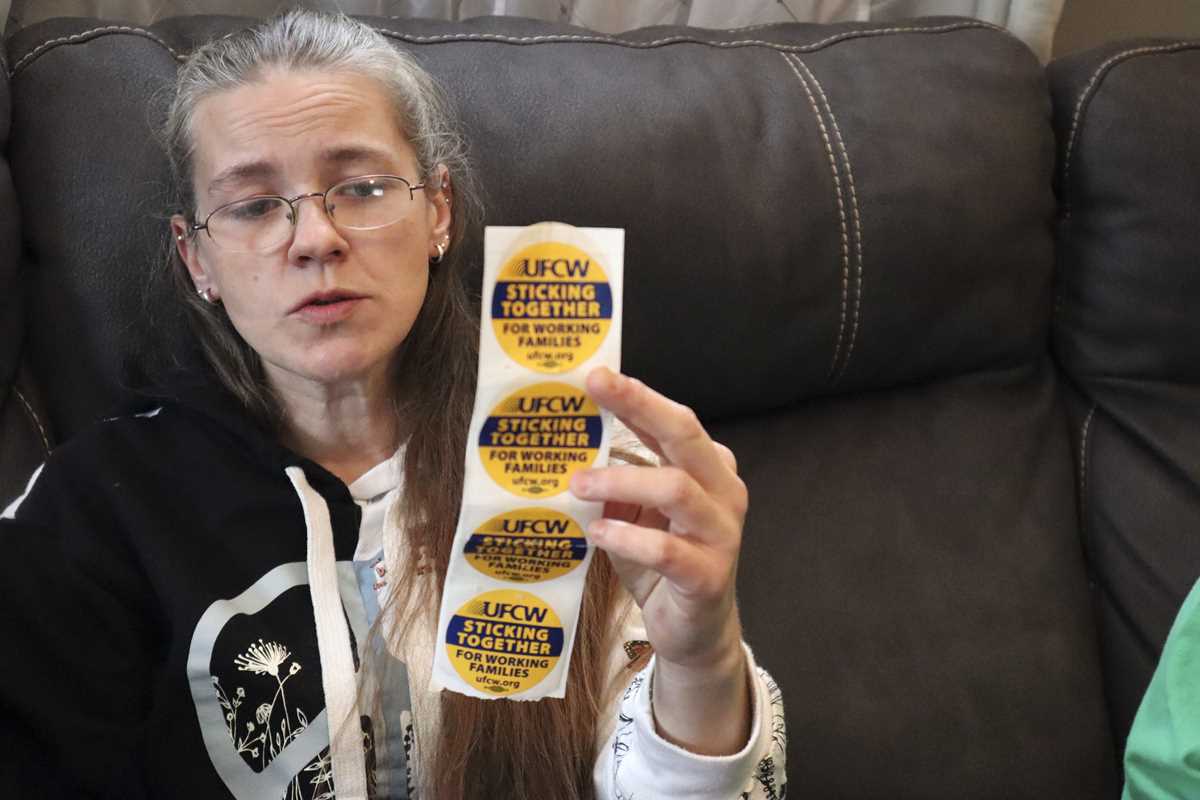 Former Tudor’s Biscuit World employee Jennifer Patton, 38, holds up stickers displaying the logo of the United Food & Commercial Workers Local 400 union at her coworker’s home in Elkview, W.Va., on Jan. 20, 2022. Patton said she was retaliated against and fired by management after she joined efforts to unionize the restaurant. Employees at the Elkview, W.Va., restaurant have already case ballots to decide whether or not they want to create a union. The votes will be read Tuesday. (AP Photo/Leah M. Willingham)

CHARLESTON, W.Va. (AP) — Workers at a West Virginia franchise of a regional fast-food restaurant on Tuesday rejected efforts to form a union that would have been the first of its kind in the state. Immediately after the vote, union organizers announced that they had filed unfair labor practice charges against the company.

United Food & Commercial Workers Local 400 alleges that Tudor’s Biscuit World fired employees of the Elkview franchise and used union-busting techniques to discourage others from voting in favor of a collective bargaining unit, said Local 400 Organizing Director Alan Hanson. Because of that, the vote should also be thrown out, Hanson said.

“We’re incredibly proud to stand with these extraordinarily brave workers, and this fight is far from over,” he said in an interview at union headquarters in Charleston. Several pro-union workers had gathered there Tuesday to watch a representative of the National Labor Relations Board count the ballots on a live Zoom call.

A secretary who answered the telephone at Biscuit World’s corporate headquarters said Tuesday that she would forward a request for comment on the unfair labor practice charges. She said the company would not comment on the vote.

The union effort is part of a larger national trend of organizing among retail and food service workers during the COVID-19 pandemic.

The mood among pro-union Elkview Biscuit World workers was somber after the NLRB official counted the ballots out loud one by one and announced that employees had rejected the union by a 7-5 vote. Roughly two dozen people work at the franchise. Twenty workers were eligible to vote. Fourteen returned ballots and two ballots were challenged and not counted. Employees sent in their ballots over the past few weeks.

“It’s disheartening,” said employee Cynthia Nicholson, 64, who wore a scarf with the UFCW logo and clutched her good luck charm, a work badge used by her late husband, a coal miner and pipefitter who belonged to unions. “We’re going to keep fighting because you just cannot let this injustice go on. … That battle is not over yet.”

Relatively unknown outside the region, Tudor’s Biscuit World is a staple of West Virginia where diners can get made-from-scratch biscuits doused in gravy; country-fried steak and sandwiches including the Miner or the Mountaineer. Founded in Charleston in 1980, the chain now has more than 70 locations, mostly in West Virginia and in parts of neighboring states Ohio and Kentucky.

Some of the workers in Elkview, a town of fewer than 2,000 surrounded by hills, pushed to unionize because they said they were treated unfairly and have worked in unsafe conditions during the COVID-19 pandemic.

Among the employees’ allegations were that they were not informed when workers tested positive for COVID-19 and that they were asked to work long hours and at different store locations and then were reprimanded for working overtime.

Nicholson and many others were also driven to organize because of familial ties to unions and a connection to the state’s history of labor activism. A century ago, West Virginia was the site of the largest labor uprising in U.S. history when a group of armed coal miners marched to Blair Mountain seeking safer working conditions and better treatment. At least 16 men were killed in the clash with government officials.

Former Elkview Tudor’s Head Cashier Jennifer Patton, whose father-in-law was a union man, was clearly upset after the ballots were read. Patton joined the union efforts after she rode in a car and worked with an employee who had recently tested positive for COVID-19 and was never told. After she started questioning the company’s policies, she was disciplined and got her hours cut. A week ago, she was fired.

“I lost my job for this,” she said, burying her head in her hands. Patton, 38, spent the morning before the vote at the Local 400 office speaking with a representative from the NLRB to document the retaliation she said she experienced at Tudor’s after joining the union efforts.

Tudor’s employee Susie Thompson, 67, said it will be difficult going back to work this weekend for the first time after the union vote. Still, Thompson, whose ex-husband was a strip miner and union member, said she’s determined to see the work environment change.

“We know the way we’re being treated is wrong,” she said, wearing a “vote union” pin. “We know it.”