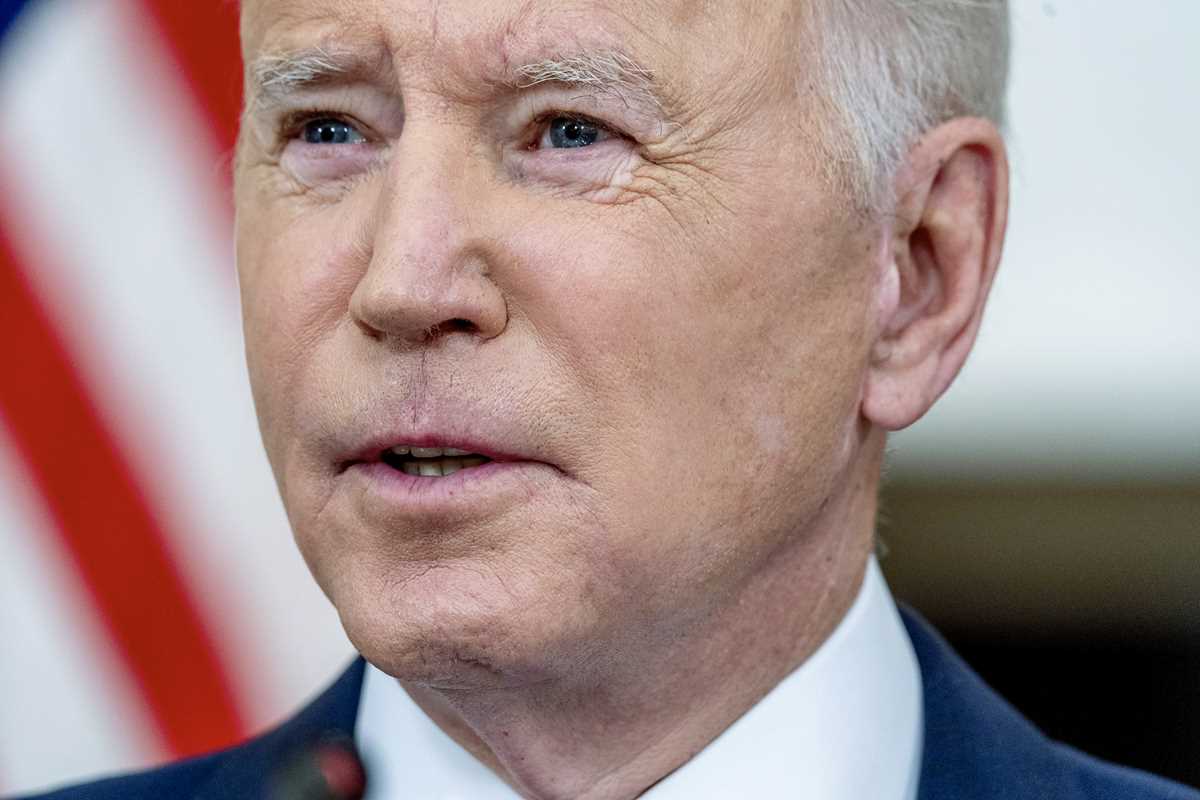 President Joe Biden speaks during a meeting with private sector CEOs about the economy in the State Dining Room of the White House in Washington, Wednesday, Jan. 26, 2022. (AP Photo/Andrew Harnik) 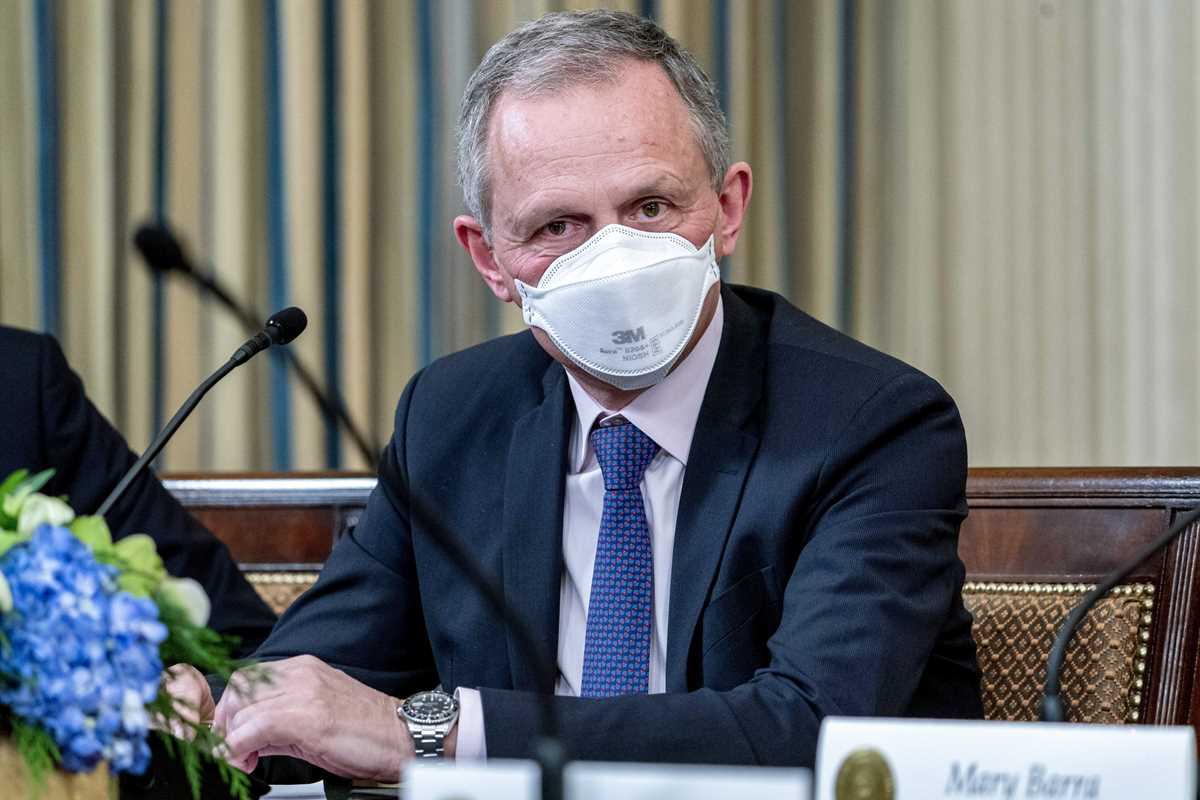 Enrique Lores, President and CEO of HP, appears at a meeting with President Joe Biden and other private sector CEOs about the economy in the State Dining Room of the White House in Washington, Wednesday, Jan. 26, 2022. (AP Photo/Andrew Harnik) 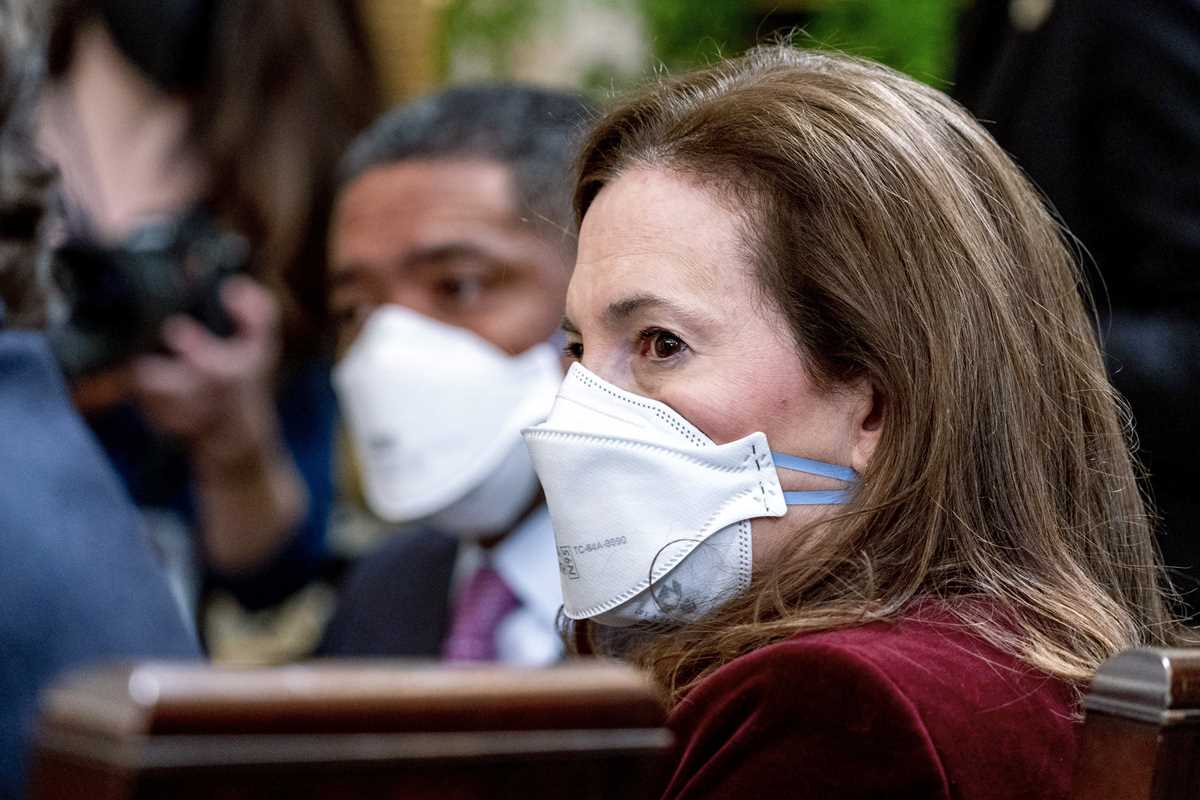 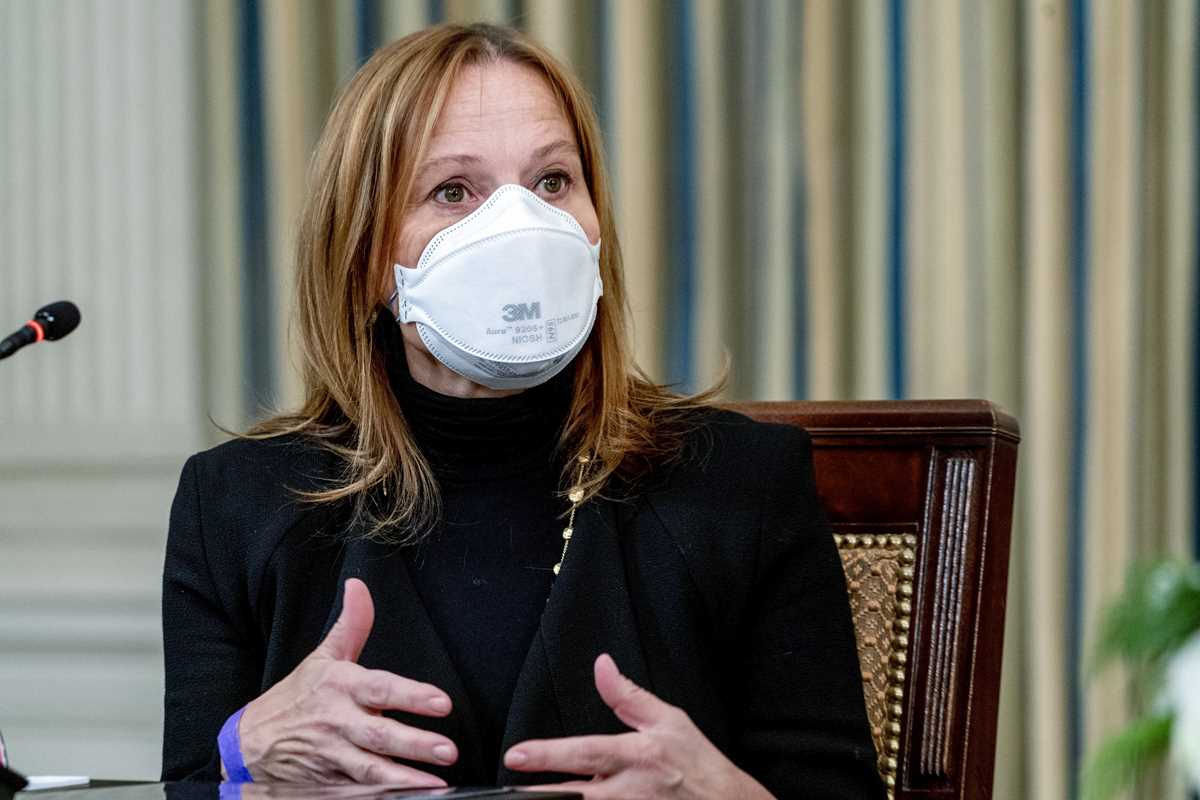 Mary Barra, CEO of General Motors, speaks during a meeting with President Joe Biden and private sector CEOs about the economy in the State Dining Room of the White House in Washington, Wednesday, Jan. 26, 2022. (AP Photo/Andrew Harnik) 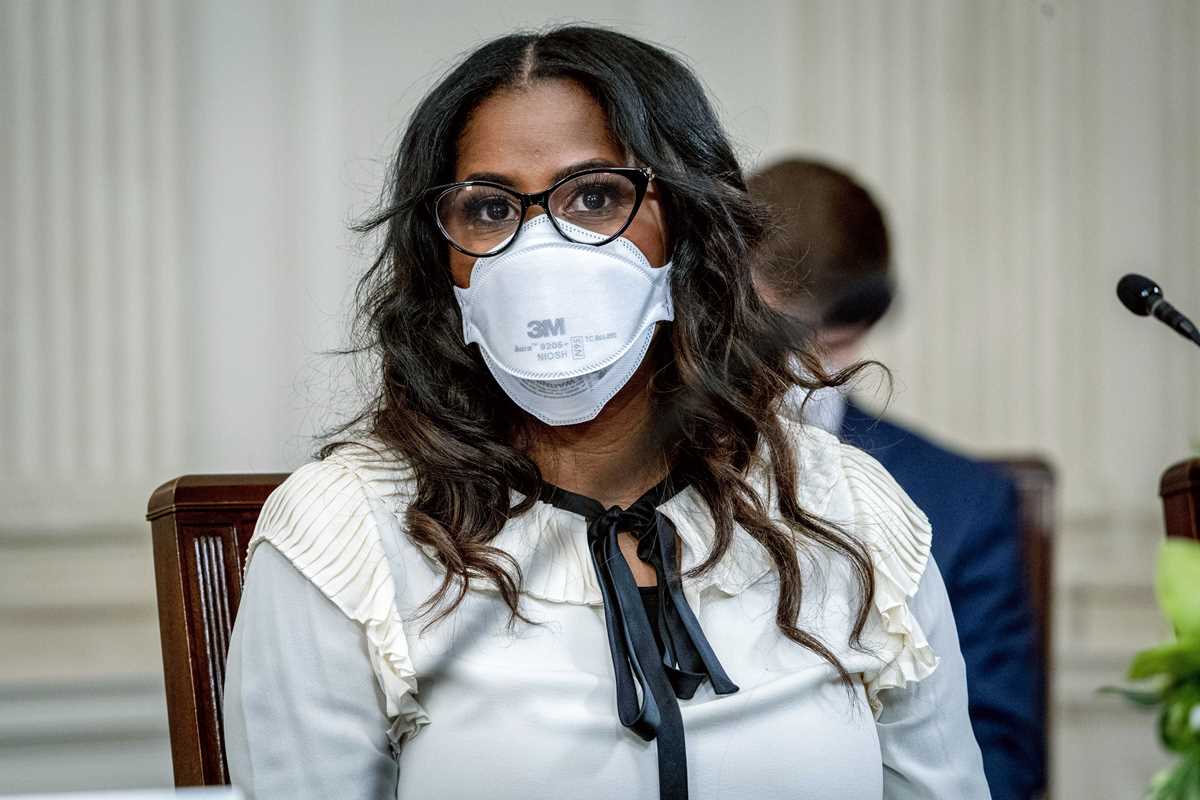 Thasunda Brown Duckett, President and CEO of TIAA (Teachers Insurance and Annuity Association), appears at a meeting with President Joe Biden and other private sector CEOs about the economy in the State Dining Room of the White House in Washington, Wednesday, Jan. 26, 2022. (AP Photo/Andrew Harnik) 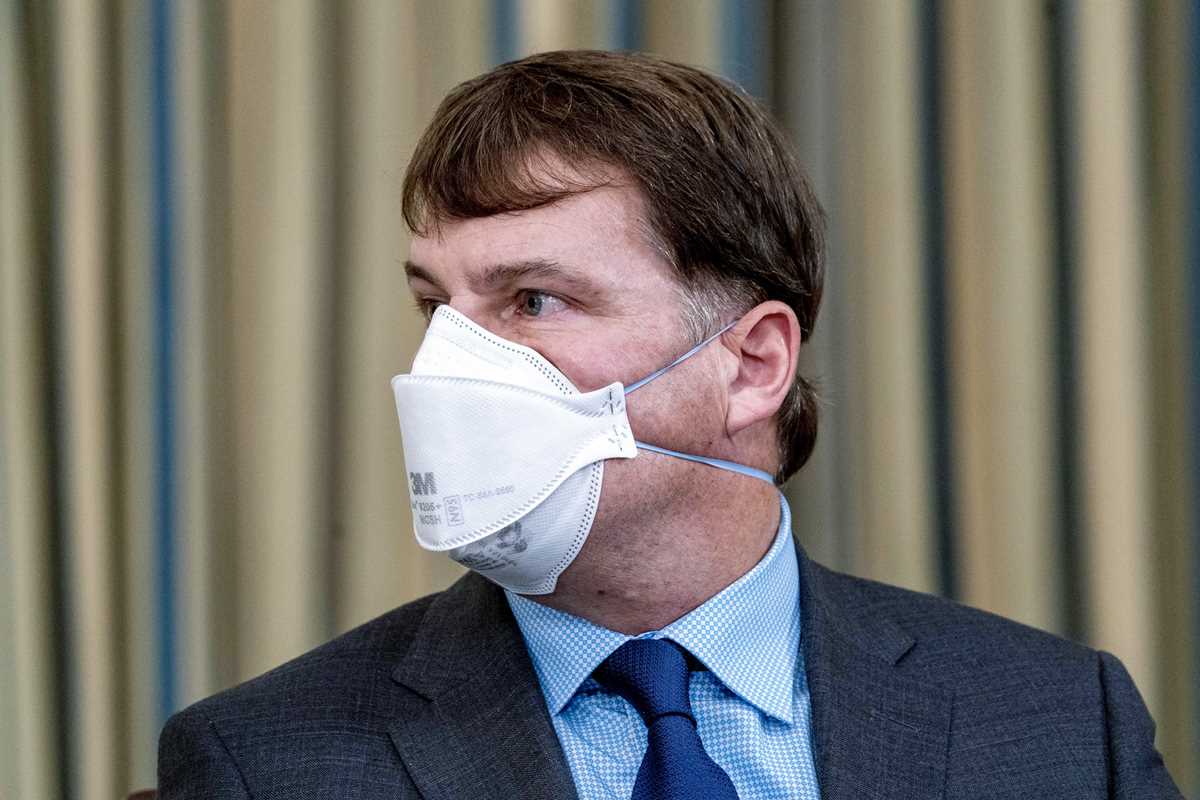 Jim Farley, President and CEO of Ford, appears at a meeting with President Joe Biden and other private sector CEOs about the economy in the State Dining Room of the White House in Washington, Wednesday, Jan. 26, 2022. (AP Photo/Andrew Harnik) 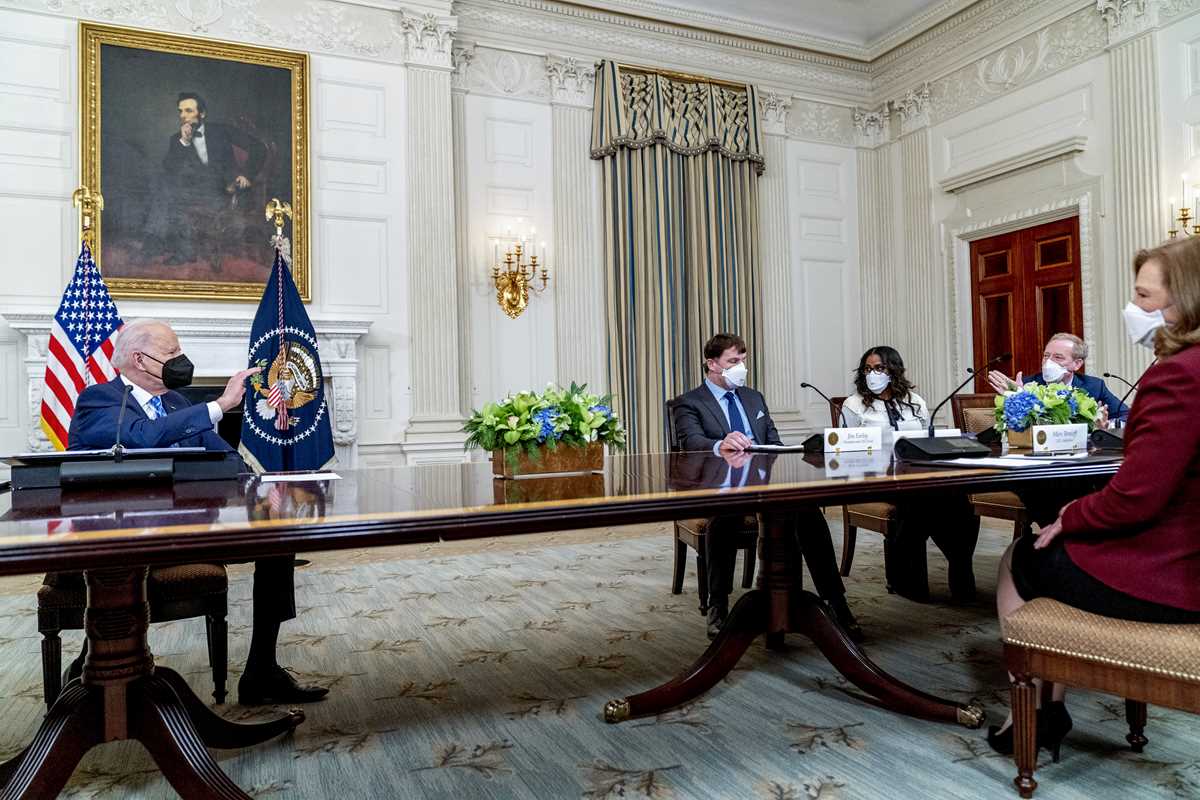 President Joe Biden, left, speaks during a meeting with private sector CEOs about the economy in the State Dining Room of the White House in Washington, Wednesday, Jan. 26, 2022. (AP Photo/Andrew Harnik)

WASHINGTON (AP) — President Joe Biden on Wednesday secured the blessing of several business leaders on his economic agenda that has stalled in the Senate, part of an effort to restart some momentum for the nearly $2 trillion in spending and tax increases that he’s proposed.

Biden met at the White House with top executives from General Motors, Ford, Microsoft, Etsy, Salesforce and other companies. The president emphasized the benefits from spending more on climate issues, manufacturing and child care.

“A lot of folks refer to this as just social spending,” Biden said. “Well, I see it this way: The Build Back Better plan lowers prices for families and gets people working.”

The president stressed the benefits of child care subsidies and universal pre-kindergarten when talking with Tom Linebarger, CEO of the engine-maker Cummins. Biden noted that a single mother raised Linebarger.

Linebarger first emphasized the need to tackle climate change, but he said that childcare is a “significant burden” for the parents who work at his company and that it’s clearly an issue that “needs to be addressed.”

It’s unclear when Congress will move to take up Biden’s plans, after West Virginia Sen. Joe Manchin — the critical Democratic vote in a split Senate — opposed the measure in December for its possible impact on the national debt and inflation. Manchin also disliked Biden’s plan to preserve the expanded child tax credit and its monthly payments, causing the benefits that were part of Biden’s coronavirus relief package to lapse in January.

Five Democratic senators on Wednesday sent a letter calling for Biden to keep the expanded child tax credit in any legislation. The president has said he needs to pare down his proposal to get it through the Senate and indicated that the tax credit will be cut, but Sens. Michael Bennet of Colorado, Sherrod Brown of Ohio, Cory Booker of New Jersey, Raphael Warnock of Georgia and Ron Wyden of Oregon urged him to reconsider.

“After historic progress, it is unacceptable to return to a status quo in which children are America’s poorest residents,” they wrote. “Raising taxes on working families is the last thing we should do during a pandemic.”

White House press secretary Jen Psaki said that Biden’s meeting with the executives was not about legislative strategy.

“The point we’re at now is determining what components there are 50 votes for and that will hopefully include a big, big chunk of what the president has proposed,” she said.

Congress also has other items on its agenda, such as a possible deal that could include $52 billion to boost semiconductor production amid a supply crunch. General Motors CEO Mary Barra emphasized that her company was moving into electric vehicles and that the funding for semiconductors was critical.

“Without having the ability to have that supply chain in this country as well, that is going to hurt our ability to lead, whether it is in electric vehicles, autonomous vehicles,” Barra said. “These are key technologies for the future and it truly is a global race.”