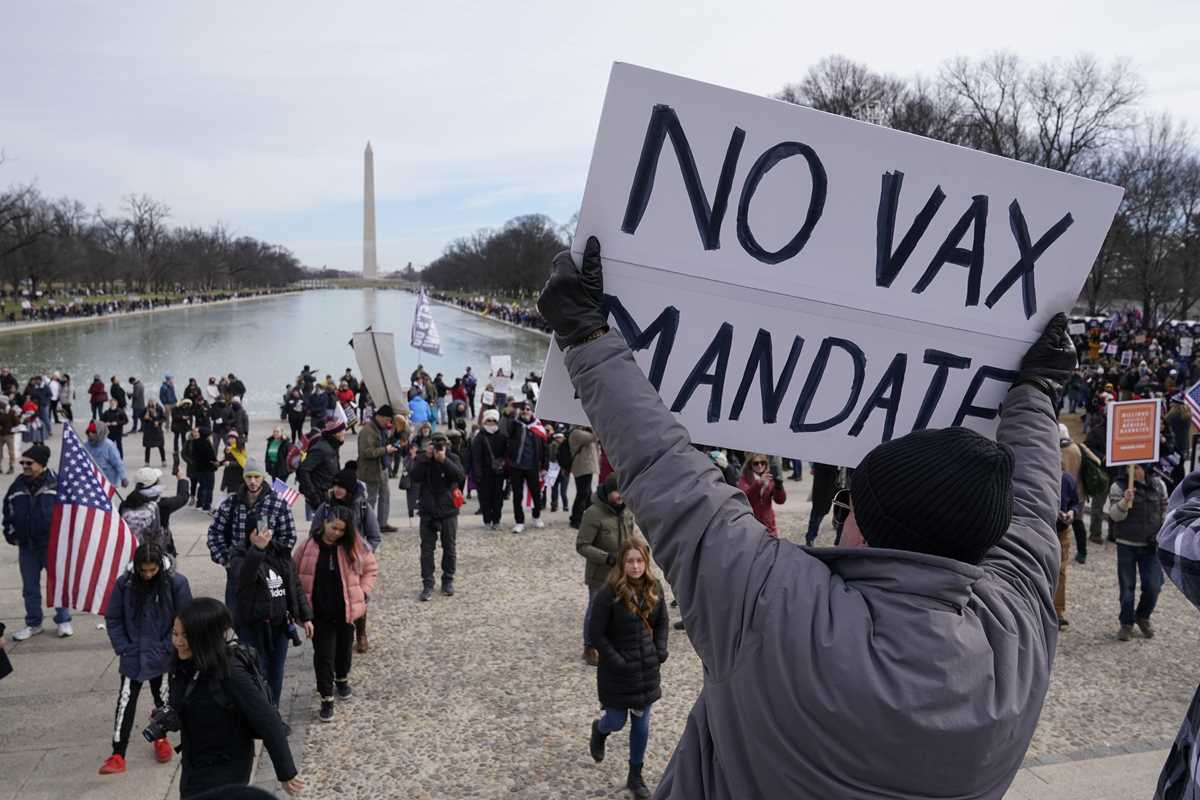 Protesters gather for a rally against COVID-19 vaccine mandates in front of the Lincoln Memorial in Washington, Sunday, Jan. 23, 2022. On Tuesday, Jan. 25, 2022, the Biden administration said it has officially withdrawn a rule that would have required workers at big companies to get vaccinated or face regular COVID testing requirements. (AP Photo/Patrick Semansky, File)

The Biden administration has officially withdrawn a rule that would have required workers at big companies to get vaccinated or face regular COVID testing requirements.

The Occupational Safety and Health Administration confirmed the withdrawal Tuesday. But the agency said it still strongly encourages workers to get vaccinated.

In early November, OSHA announced a vaccine-or-test mandate for companies with at least 100 employees. The rule __ which would have impacted more than 80 million U.S. workers __ was originally set to go into effect on Jan. 4.

But numerous states and business groups challenged the rule in court. On Jan. 13, the Supreme Court halted the plan. In a 6-3 ruling, the court’s conservative majority concluded that OSHA had overstepped its authority.

“OSHA has never before imposed such a mandate. Nor has Congress,″ the court’s majority wrote. ”Indeed, although Congress has enacted significant legislation addressing the COVID-19 pandemic, it has declined to enact any measure similar to what OSHA has promulgated here.”

U.S. corporations have been split over whether to mandate employee vaccinations. United Airlines began requiring vaccines in August; the company says 99% of its workers have been vaccinated or have requested medical or religious exemptions. Tyson Foods, which also announced a mandate in August, says 96% of its workers were vaccinated by a Nov. 1 deadline.

But other big businesses, including Starbucks and General Electric, scrapped previously announced vaccine mandates for their employees after the Supreme Court’s ruling.

OSHA indicated that the rule could return in some form. While it is no longer an enforceable standard, it remains a proposed rule, OSHA said. For now, the agency said it will prioritize the health care mandate.

David Michaels, an epidemiologist and former OSHA administrator who now teaches at The George Washington University, said the agency could consider a new rule that would include other measures designed to prevent the spread of COVID-19 in workplaces, such as requiring face masks, distancing, and better ventilation systems.

Should you invest $1,000 in Tyson Foods right now?

Before you consider Tyson Foods, you’ll want to hear this.

MarketBeat keeps track of Wall Street’s top-rated and best performing research analysts and the stocks they recommend to their clients on a daily basis. MarketBeat has identified the five stocks that top analysts are quietly whispering to their clients to buy now before the broader market catches on… and Tyson Foods wasn’t on the list.

While Tyson Foods currently has a “Buy” rating among analysts, top-rated analysts believe these five stocks are better buys.